Several years ago we arrived in San Sebastian in early August hoping to camp for few days.  Not a chance – there wasn’t a scrap of space available to pitch a tent so we moved on.    Now in early September we were finally going back and looking forward to enjoying the town without the hordes of summer visitors (I’m definitely getting old!).

So –   what’s so great about San Sebastian!

Good offers can be found on occasion for Bilbao and Biarritz airports.   We flew to Bilbao,  walked out of the terminal and hopped on a bus which brought us directly to the bus station in San Sebastian in 75 minutes (tickets cost €17 each way).

Well …we can’t have everything in life! 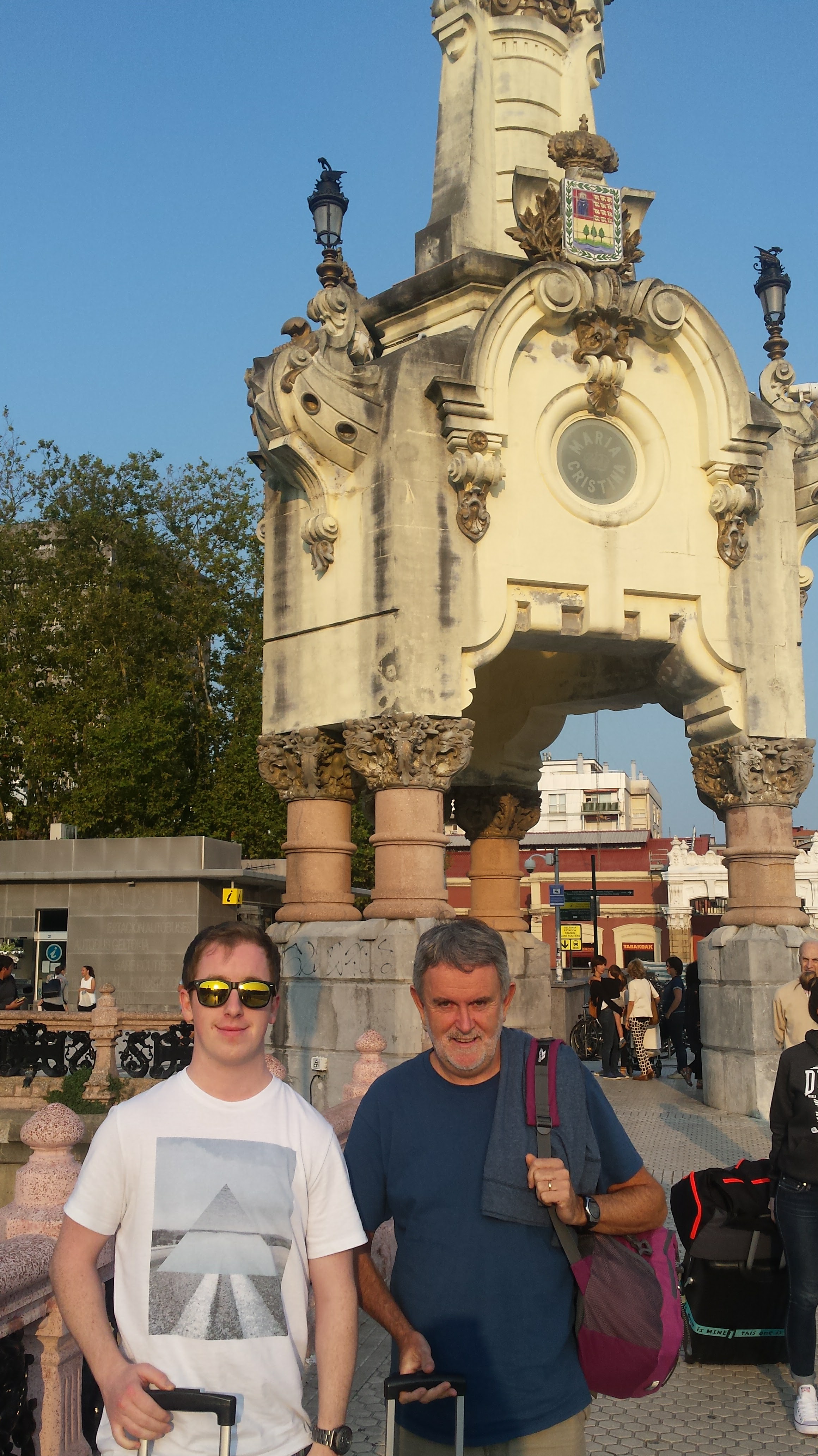 (Arriving in San Sebastian …. this photo is significant not because of the striking bridge nor the even more striking male models – no – its that BLUE sky!!!) 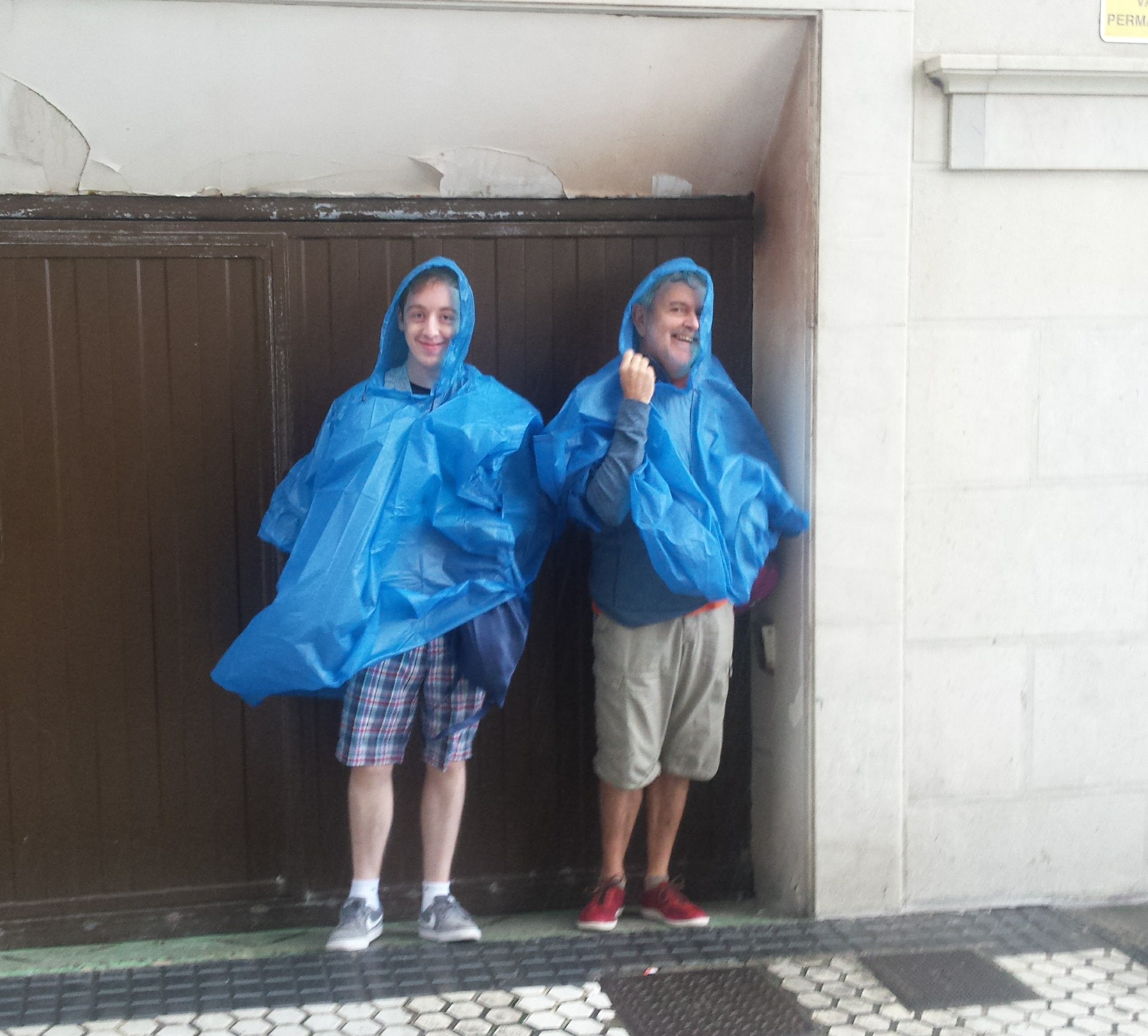 San Sebastian has three beautiful sandy beaches that follow the curve of the Bay.

La Concha, named after the shell shape of the bay,  is the most central and is considered one of the top city beaches in the world and deservedly so.  Over a kilometre in length,  it is the safest of the 3 for swimming.  In summer,  there are umbrellas and beds for rent in the city colours of blue and white (or just bring your own).  Further around the bay is the quieter Ondarreta beach.   Zurriola is the more popular with surfers and lies in the other direction behind Monte Urgull. 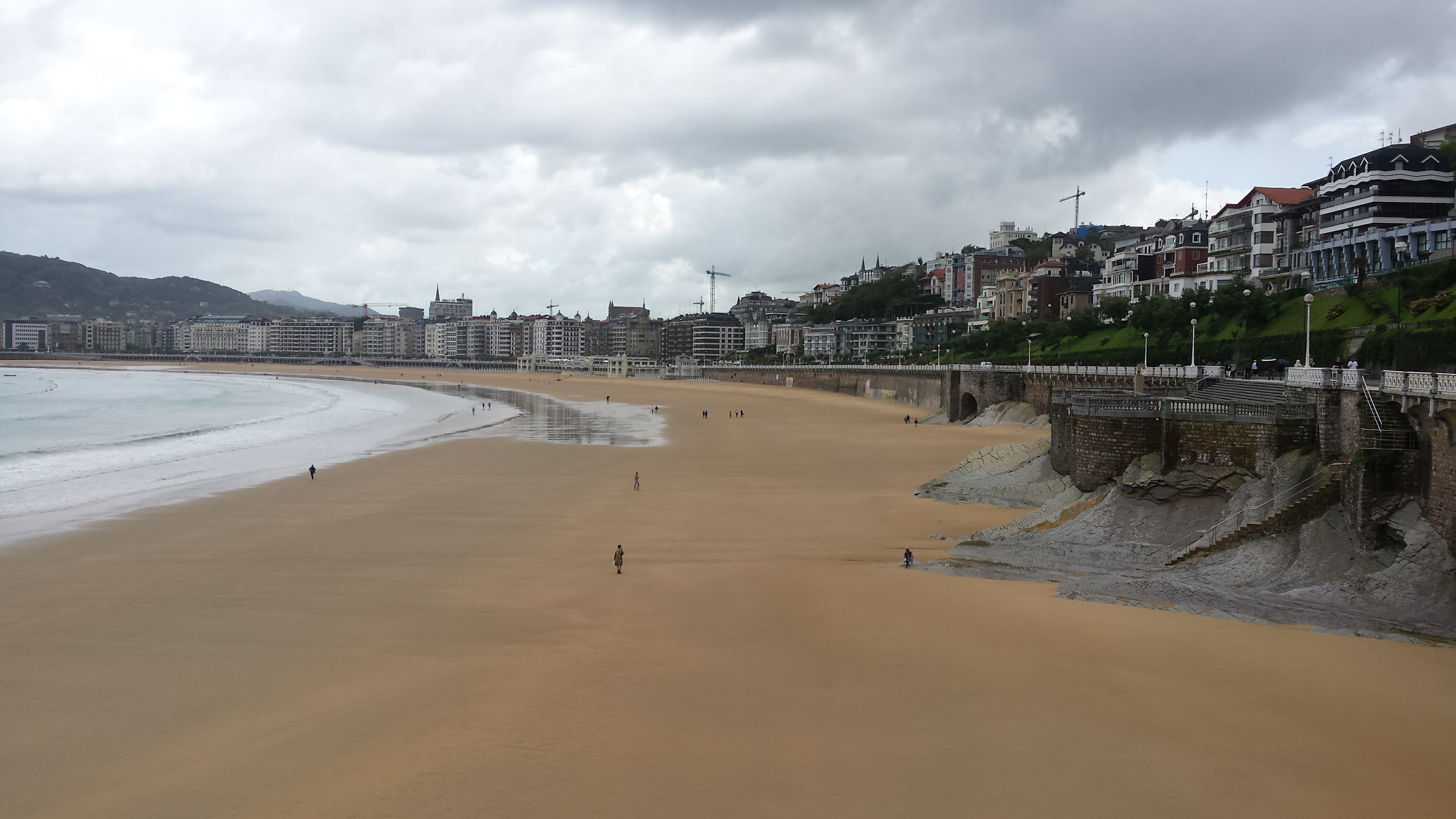 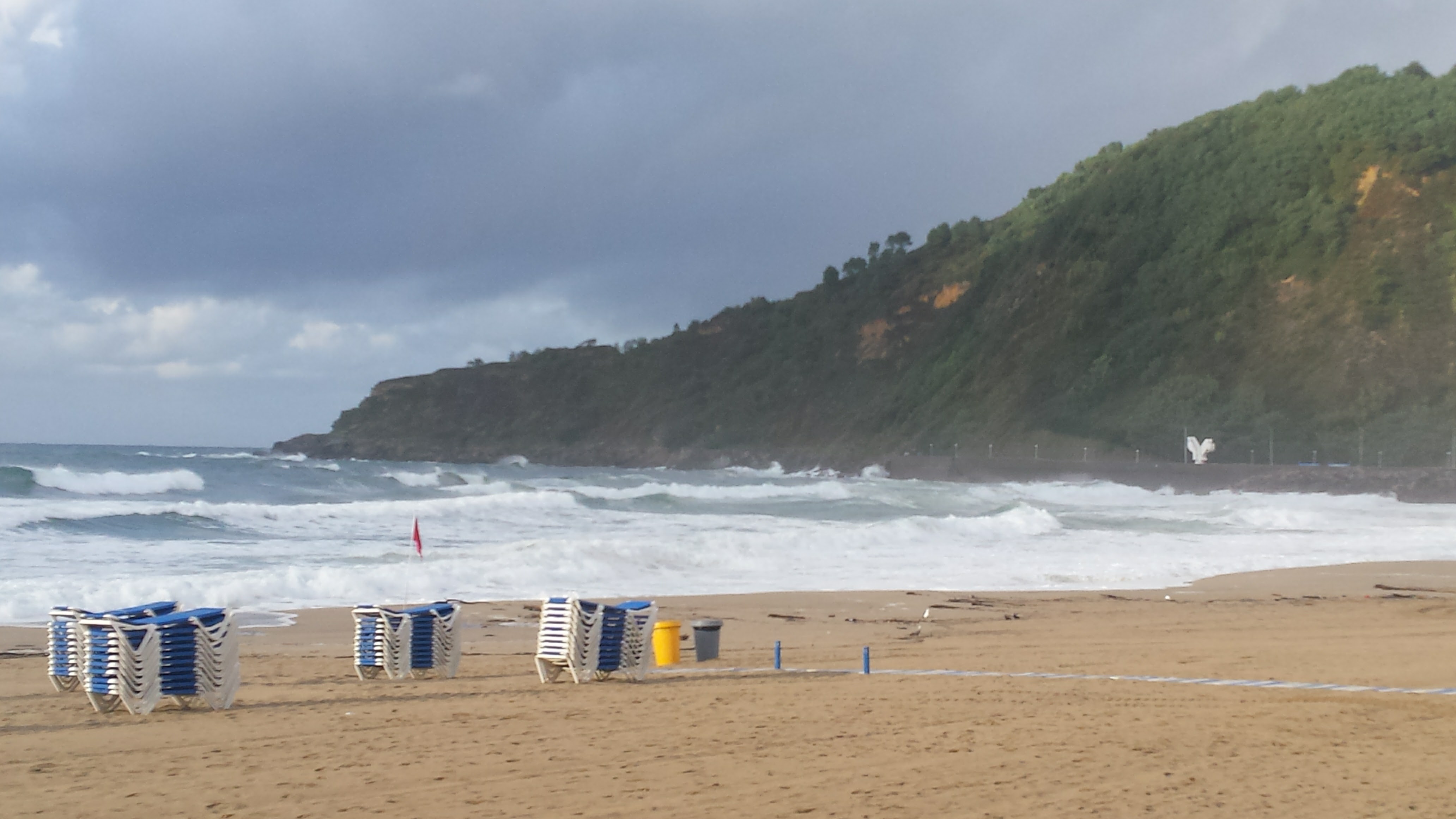 The city is situated between Monte Urgull and Monte Igueldo and the summits offer stunning views across the bay.   (Family members who arrived earlier in the week managed to capture the blue skies!). 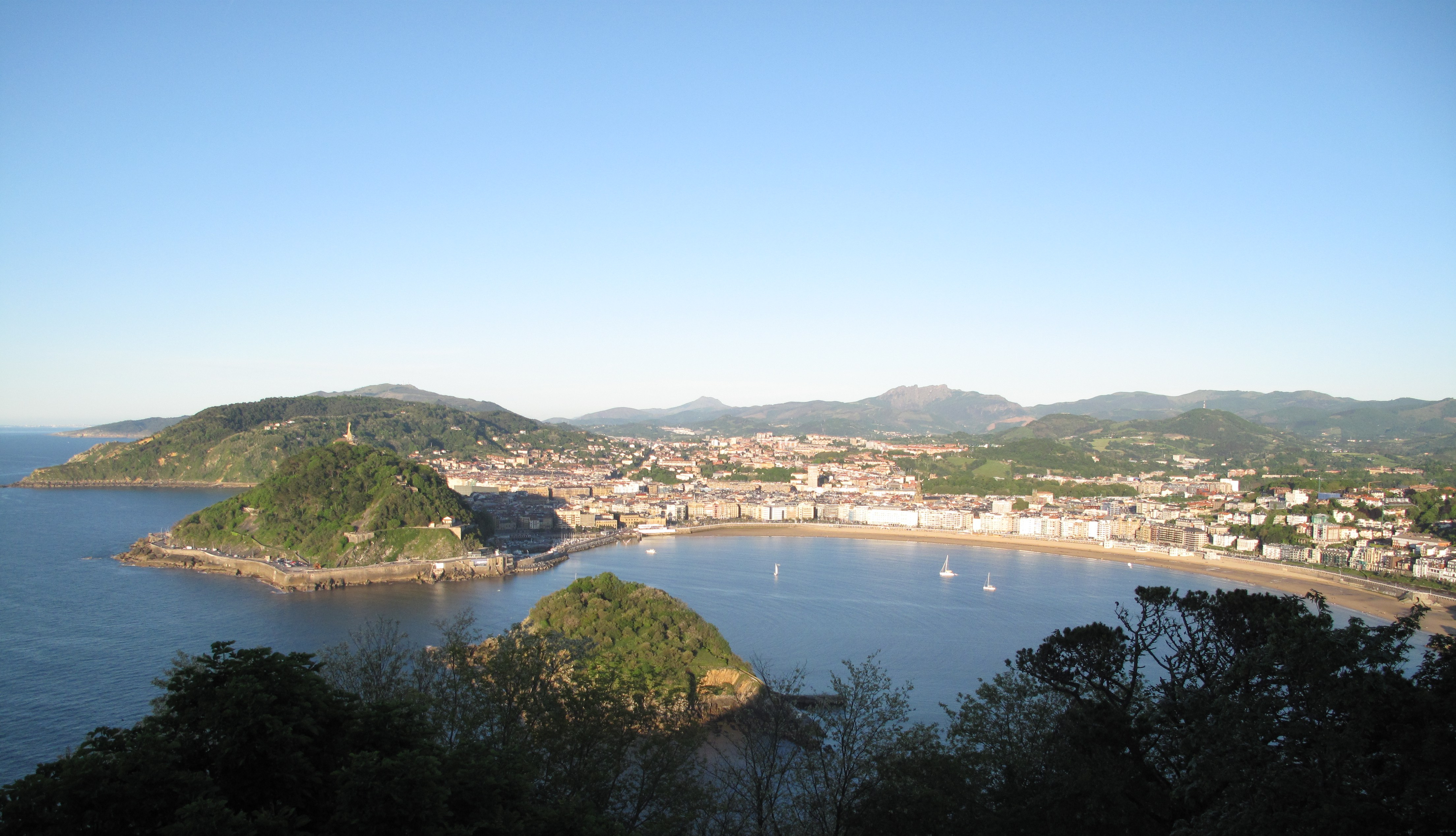 Monte Urgull is mostly public park and home to a military museum.  At the summit is a large statue of Christ.  The climb is worth the effort for the panoramic views 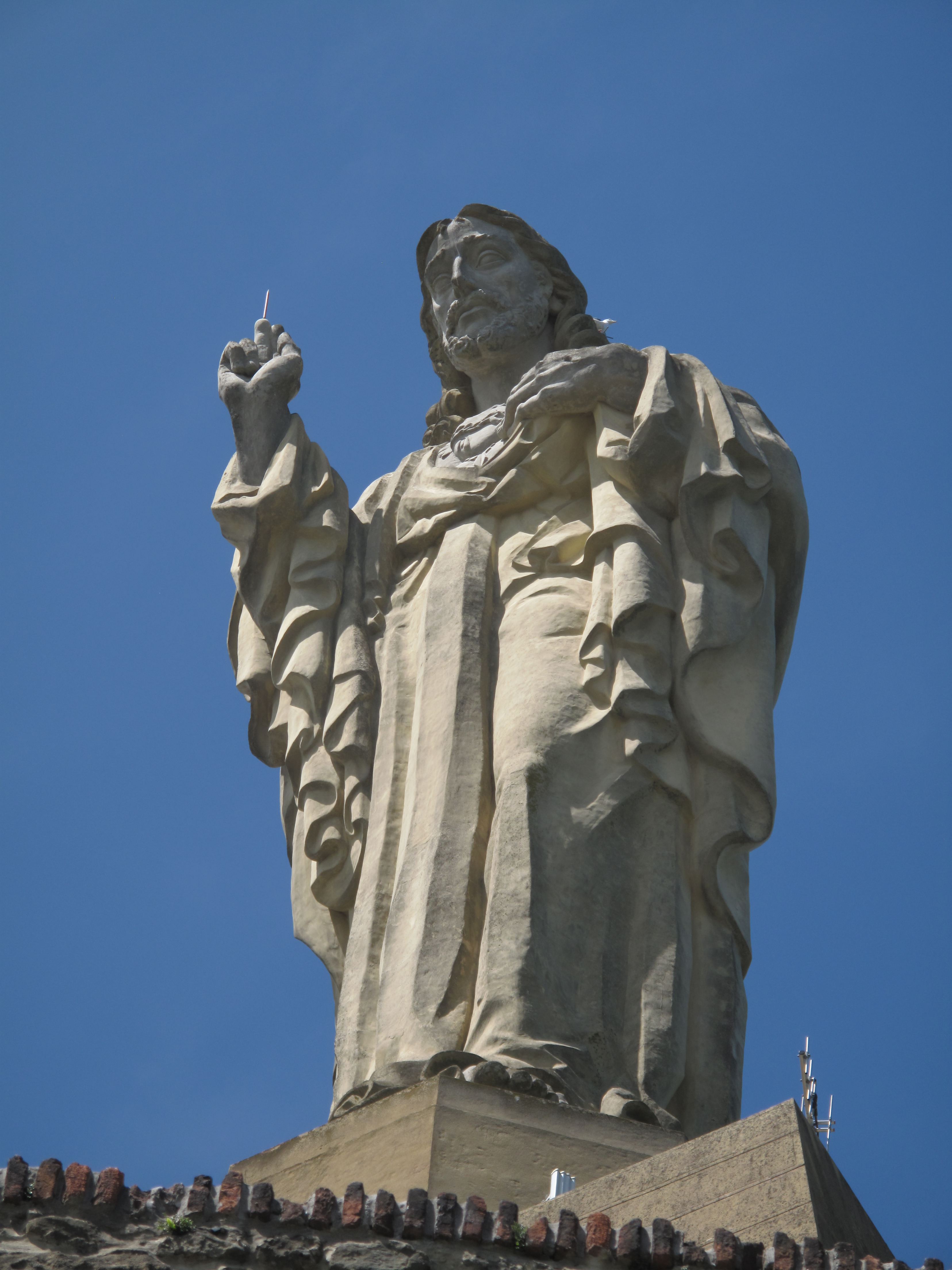 Monte Igueldo is located at the Ondarreta Beach end of the bay.   Once again the ascent is rewarded with fantastic views.   The most popular means of getting to the top is by funicular railway.  Inaugurated in 1912 it is the 3rd oldest in the country.   Apart from the scenery,  this summit has an old fashioned theme park.  There is nothing sophisticated about the attractions but they have a quirky and charming appeal. 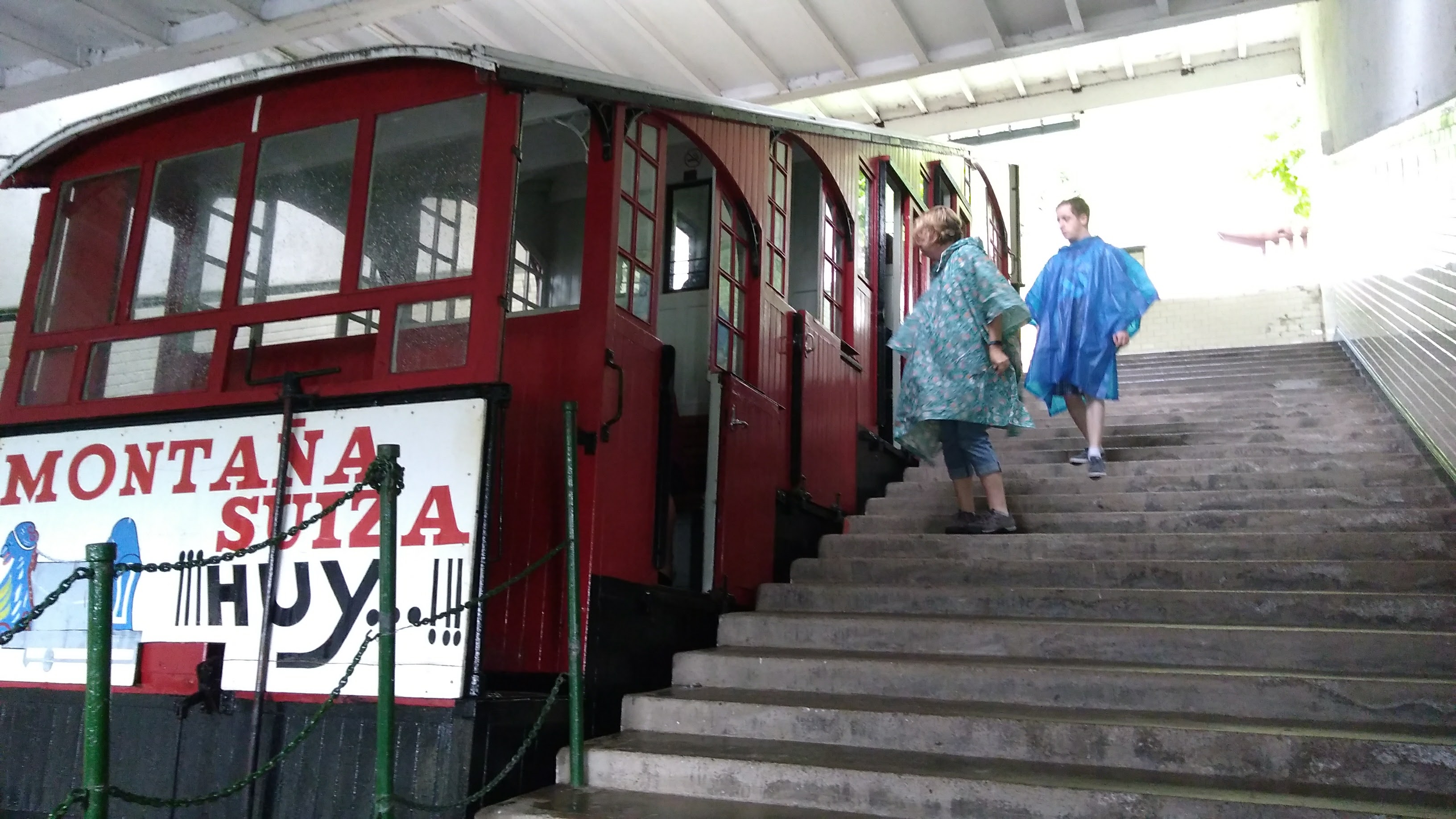 (Let’s get the best seats) 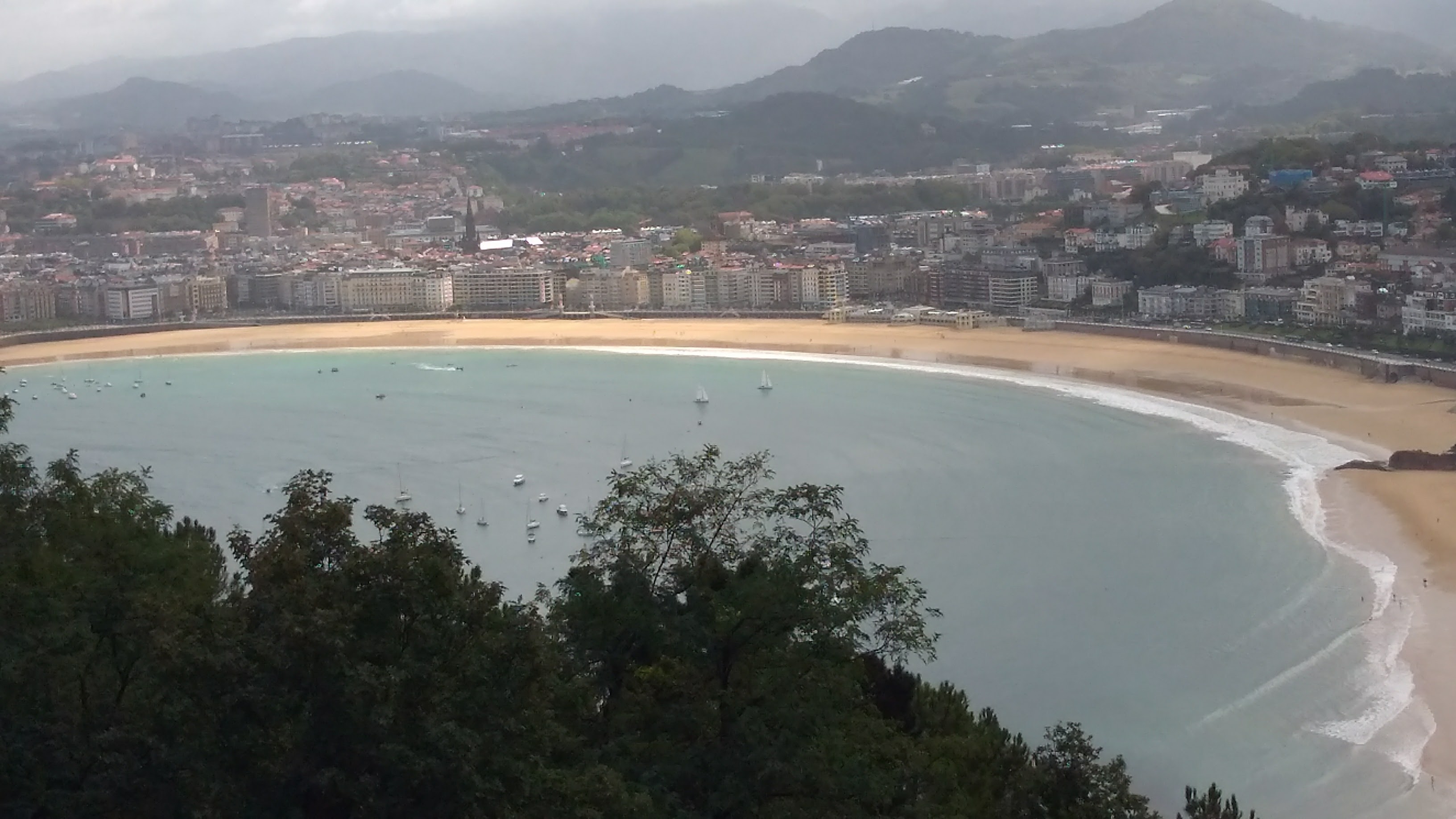 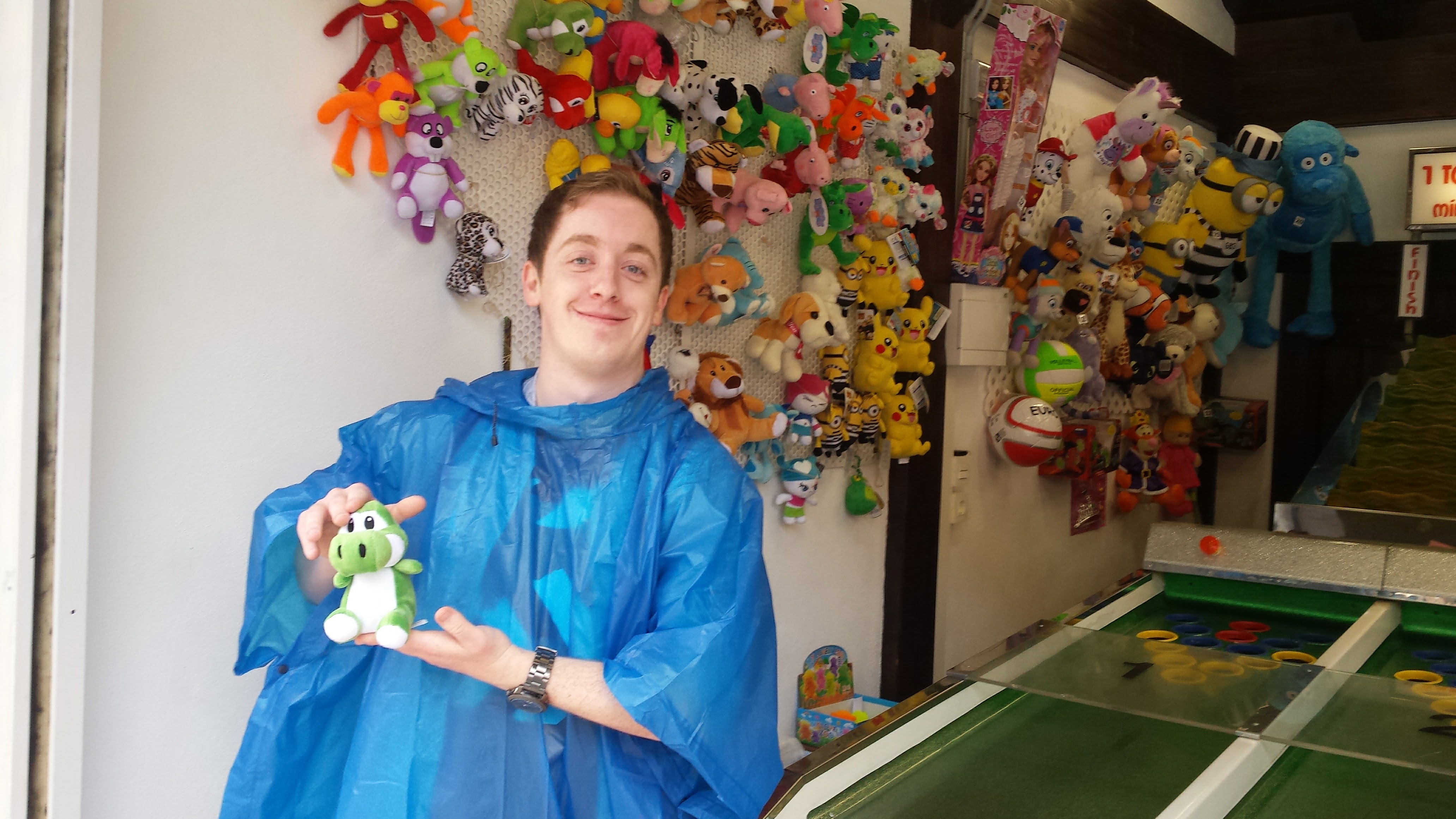 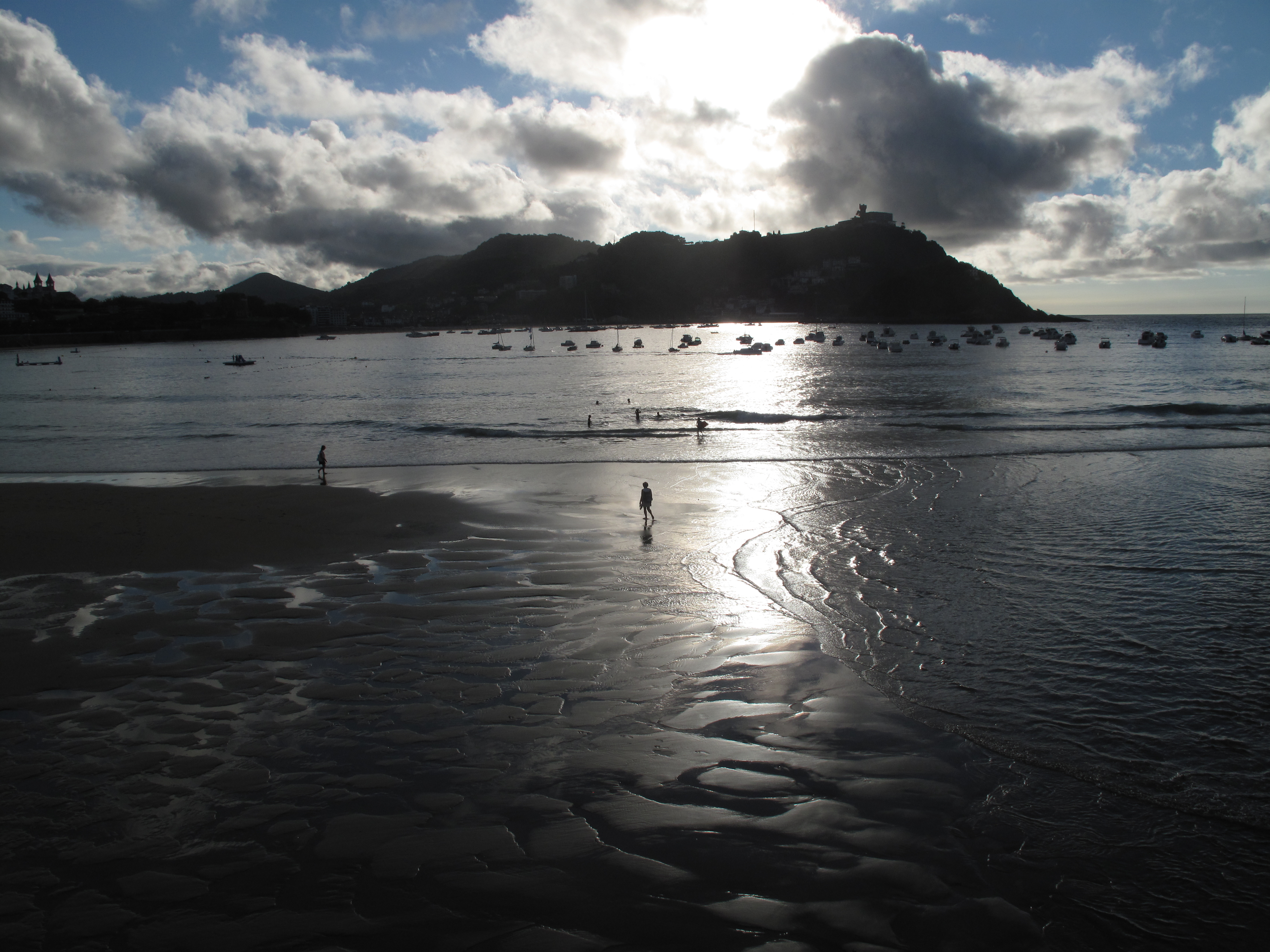 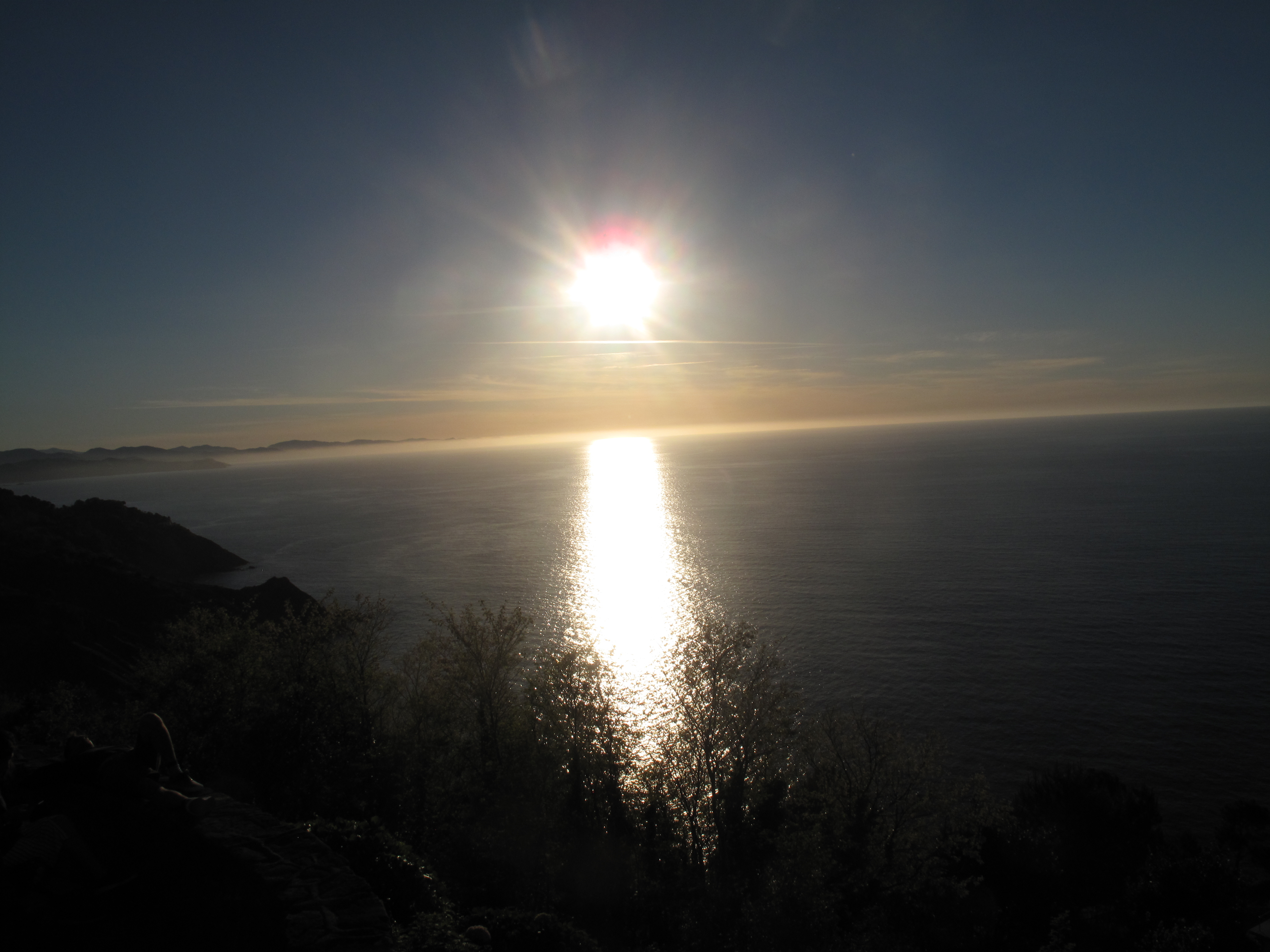 If just in town for a few days then most visitors are content with La Concha promenade and climbing the two hills.   The promenade walk can be extended by following the Paseo Nuevo around the base of Monte Urgull and on past Playa de la Zurriola,  covering about 6 kilometres.

A popular 7 kilometre coastal walk starts at the end of Playa de la Zurriola and continues to the neighbouring fishing village of Pasajes.   Along the way you might meet Camino Pilgrims on their approach to San Sebastian.   You can return by public transport with local buses running every 20 minutes. 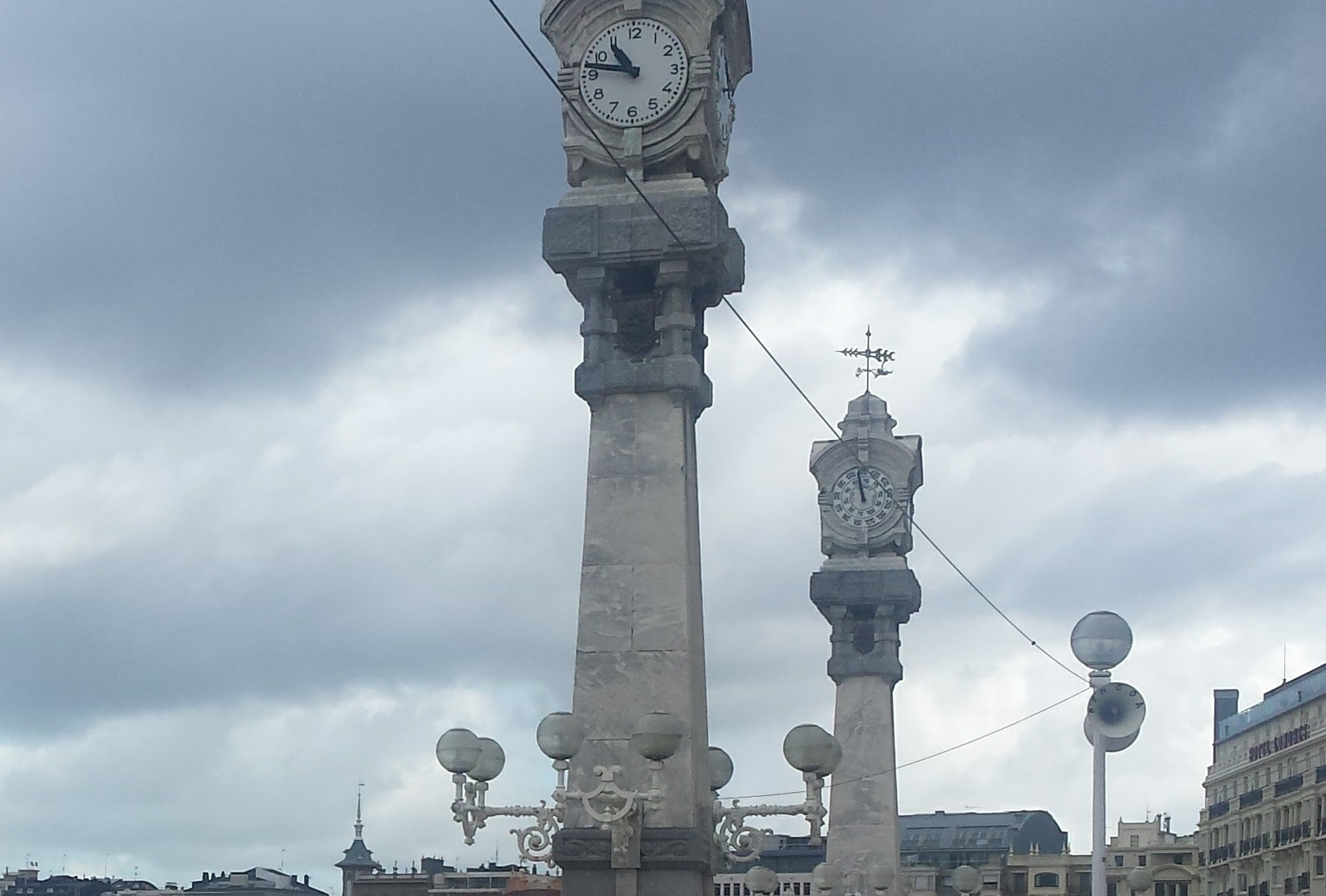 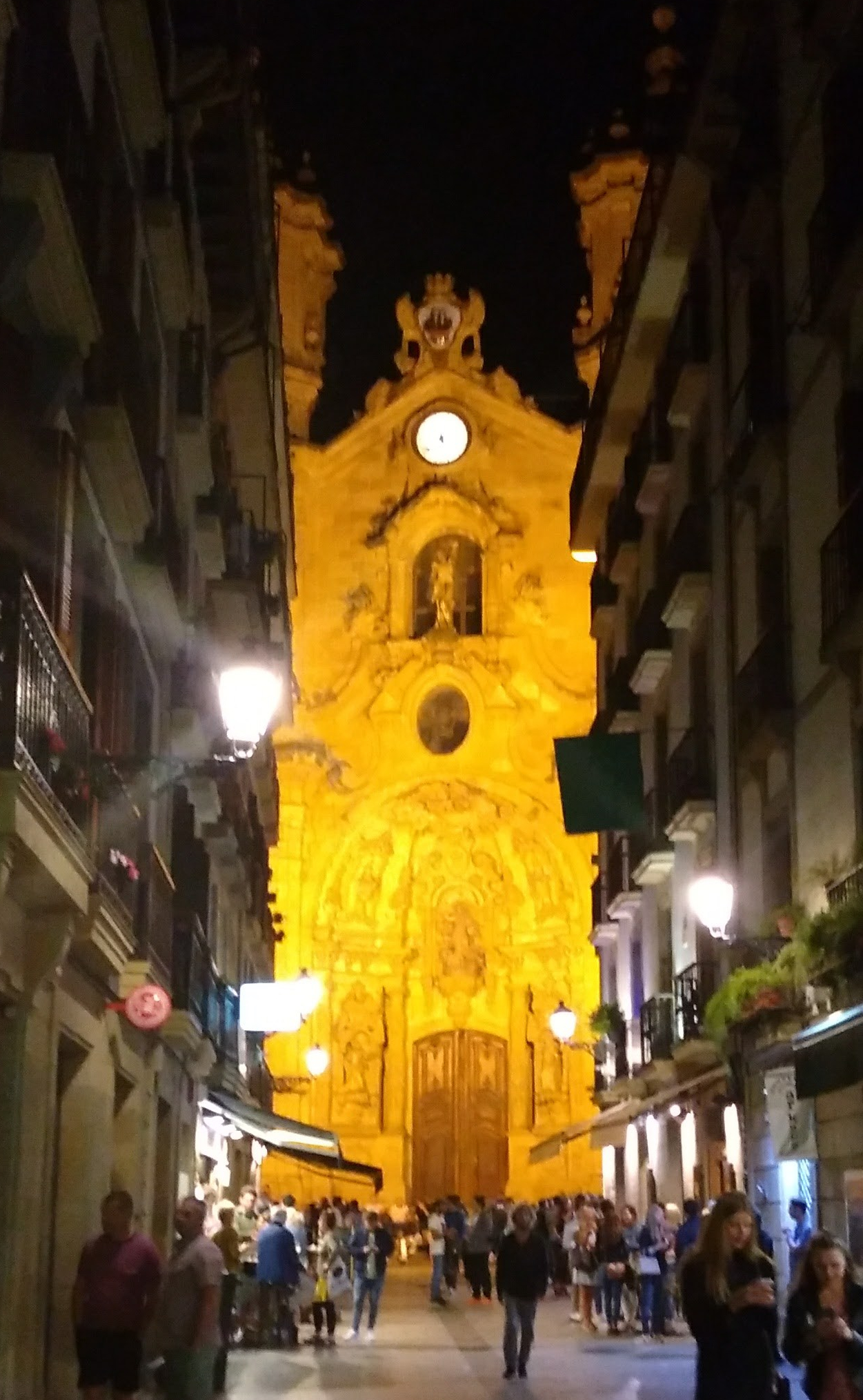 (Basilica de Santa Maria in the heart of the old town) 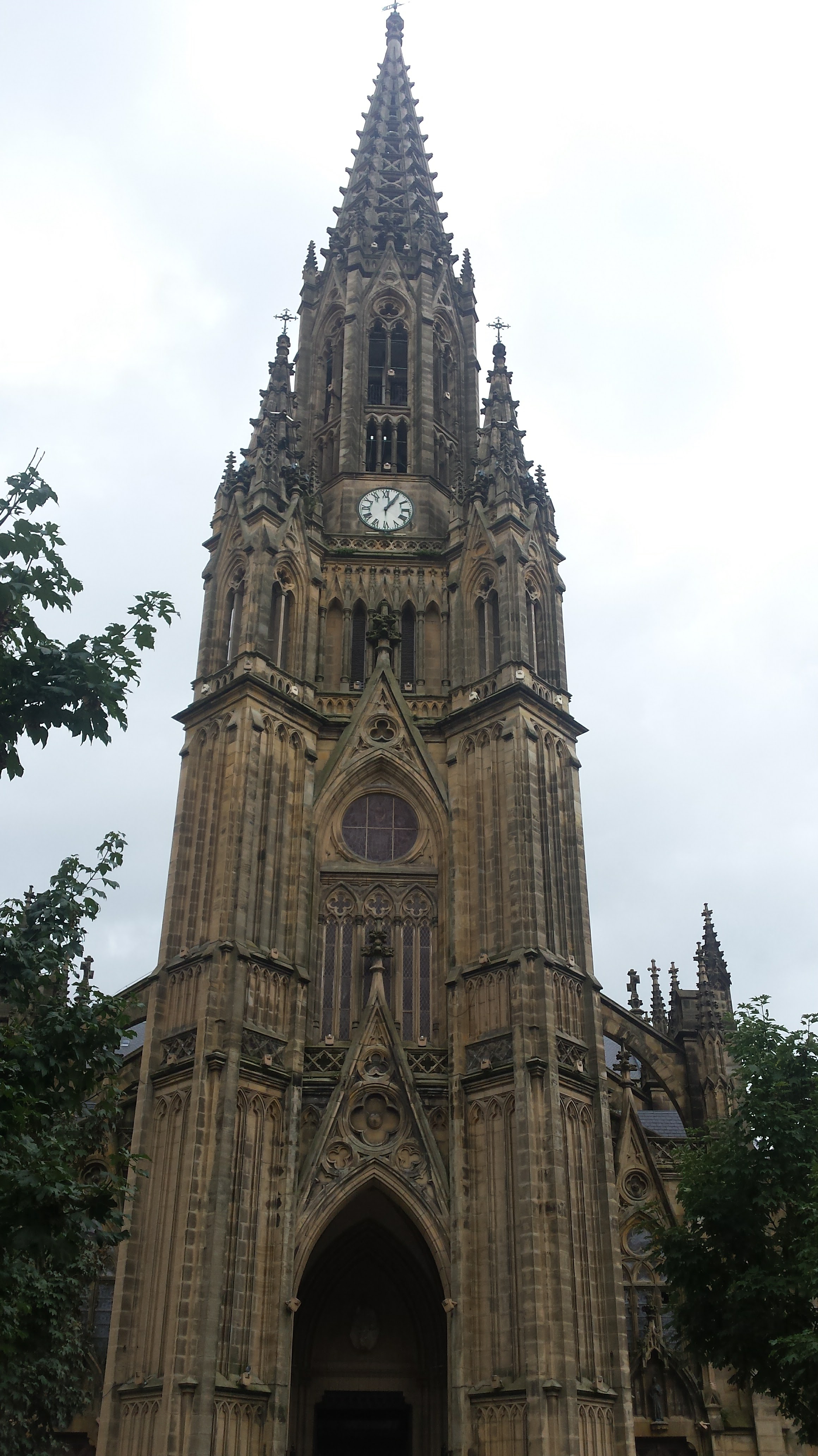 The city has one of the highest concentrations of Michelin star restaurants in the world making it a foodie paradise.   However,  it is the everyday food that makes the place so appealing to the majority of travelers.   Streets of the old town are crammed with bars offering pintxos – small bar bites or tapas.   Usually you order a drink,  ask for a plate and off you go.  It works on an honour system with you telling the barman what you had – the toothpicks act as a tally.   Don’t be put off by floors littered with napkins – its the tradition so therefore the dirtier the floor,  the more popular the bar!  Try not to become too attached to a particular crab or goat’s cheese delight – the idea is to move on and sample more elsewhere!   Most places have specialities written on boards and if you happen to be in town on a Thursday then you can enjoy pintxo – pote which is a pintxo and drink combination at discounted rates. 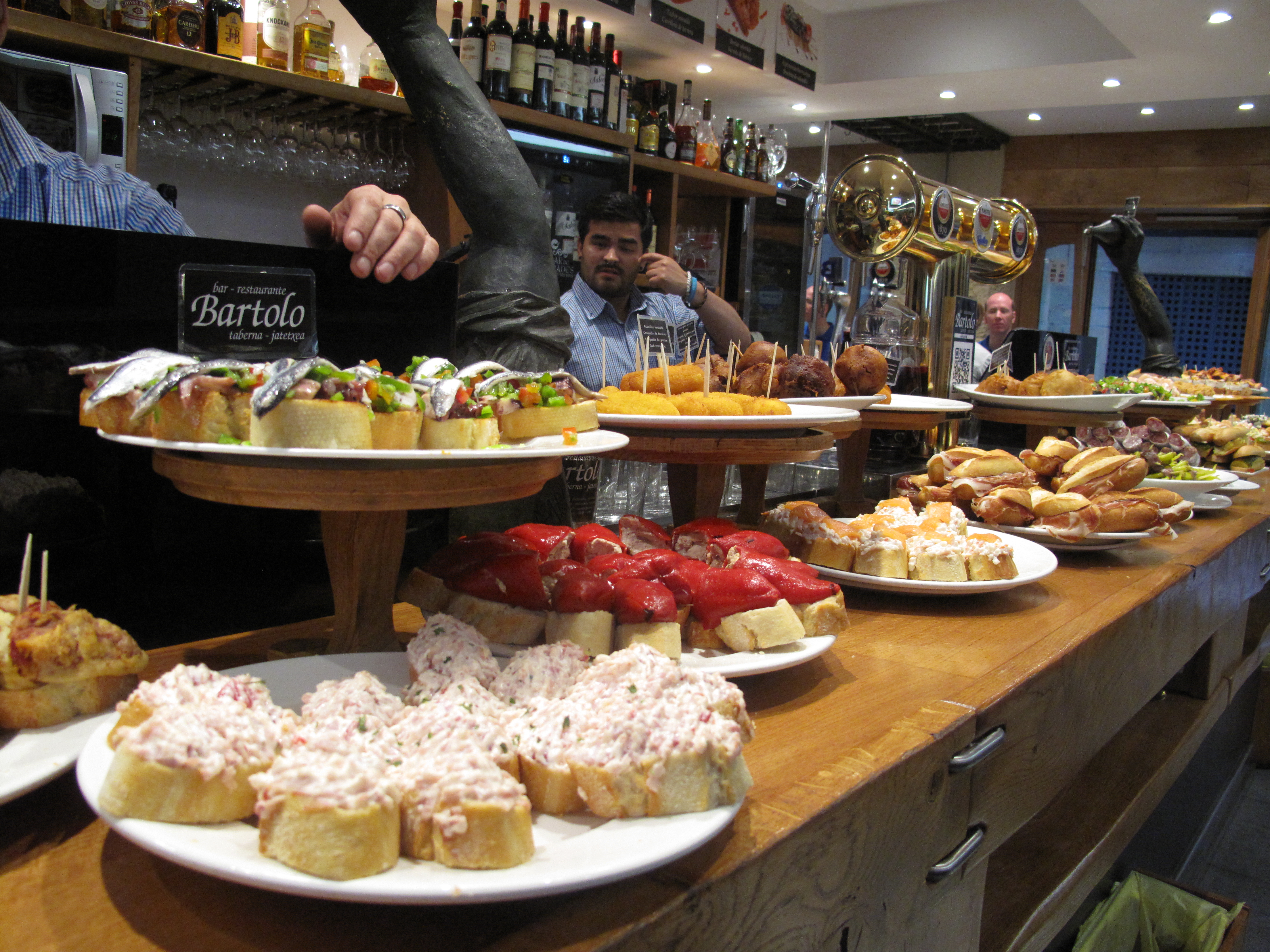 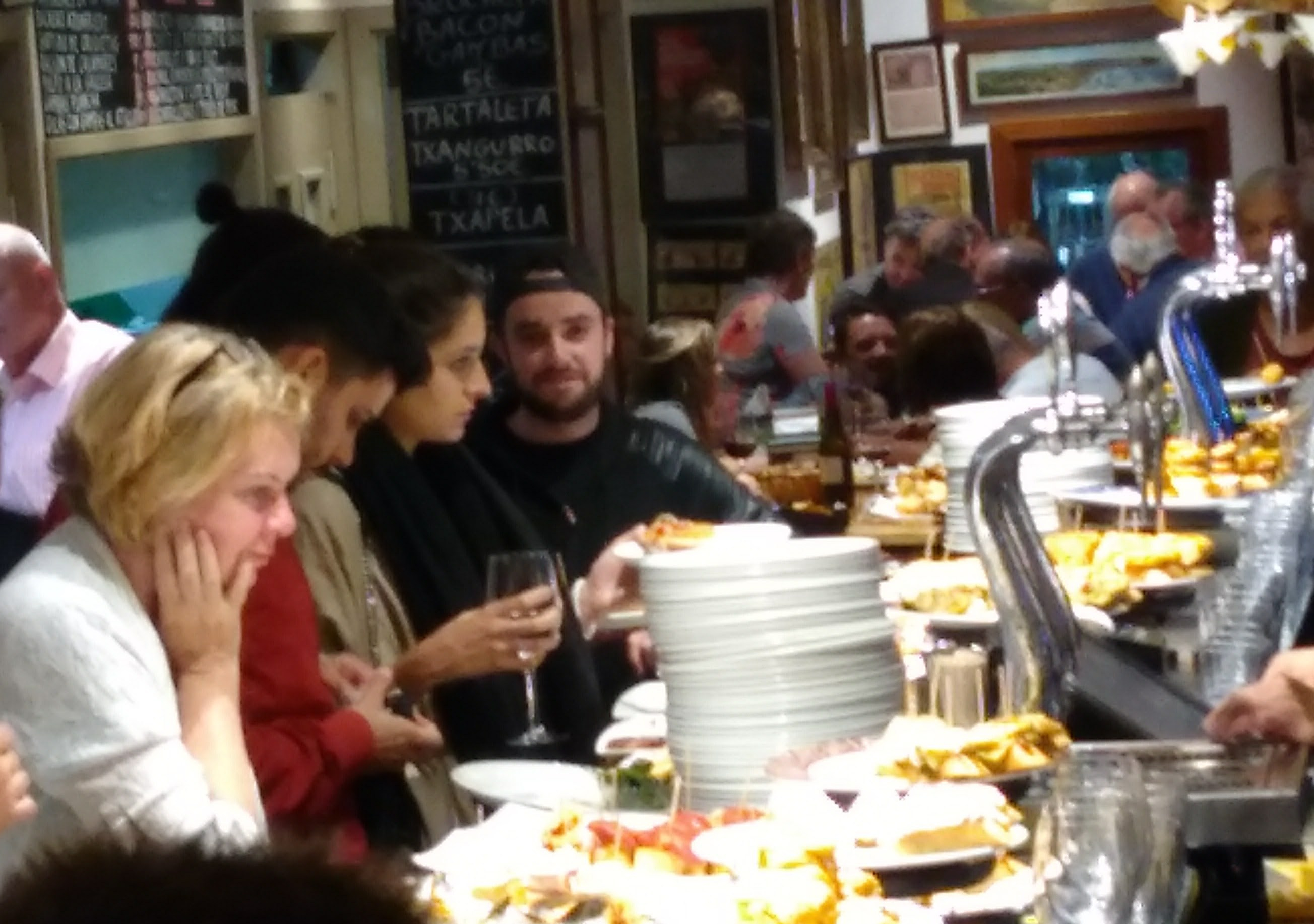 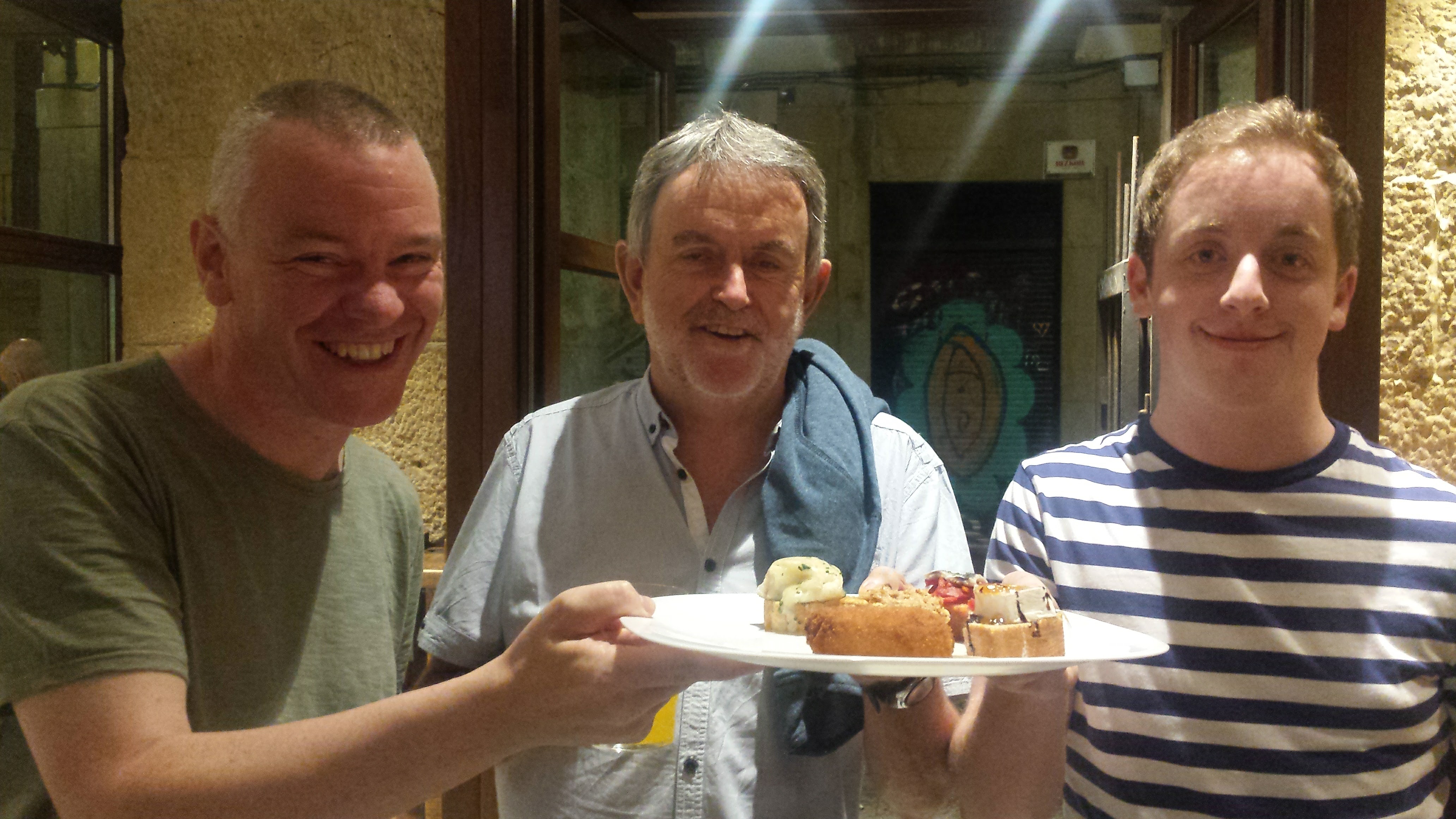 (A sharing platter?  Definitely not!) 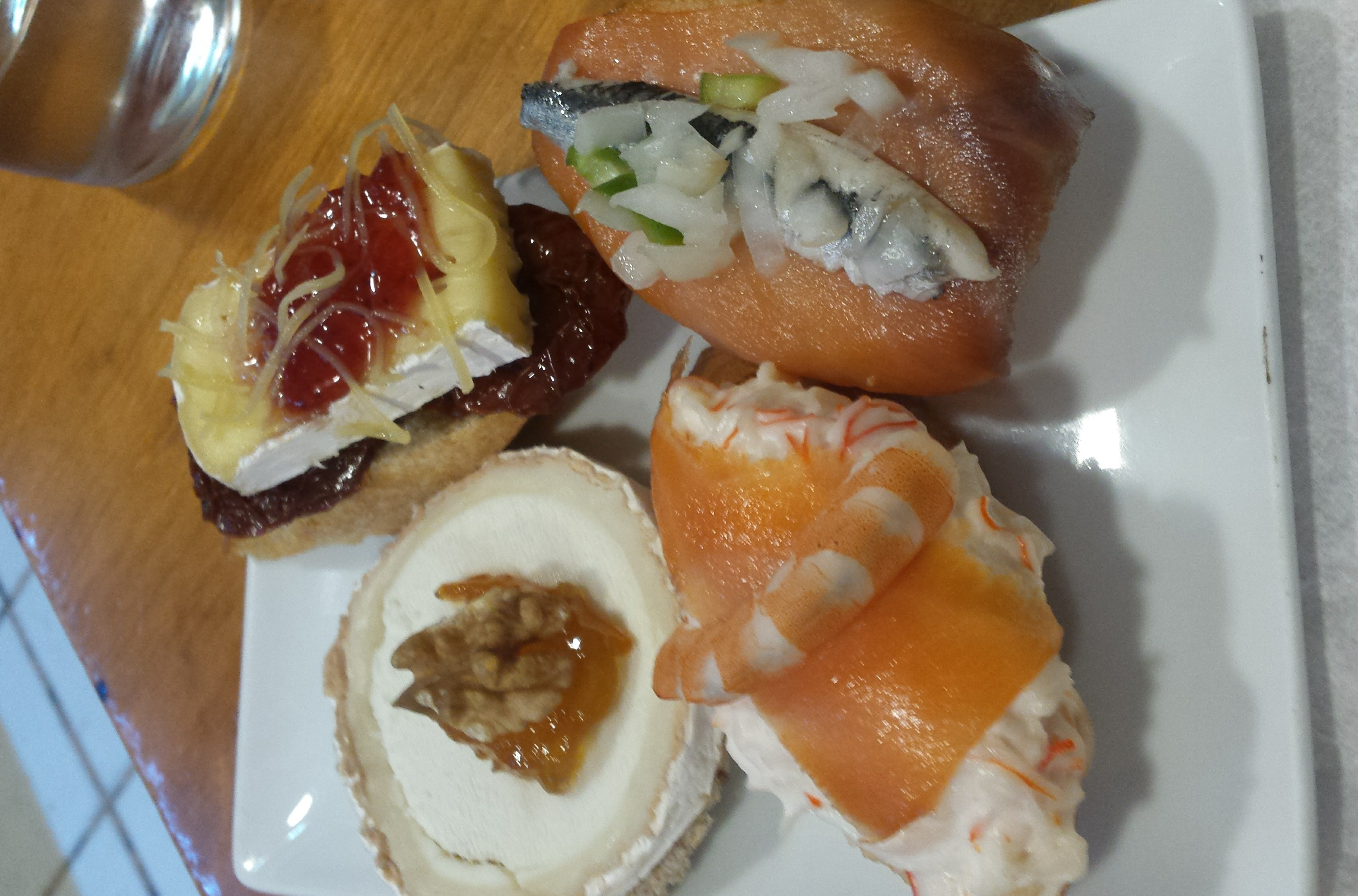 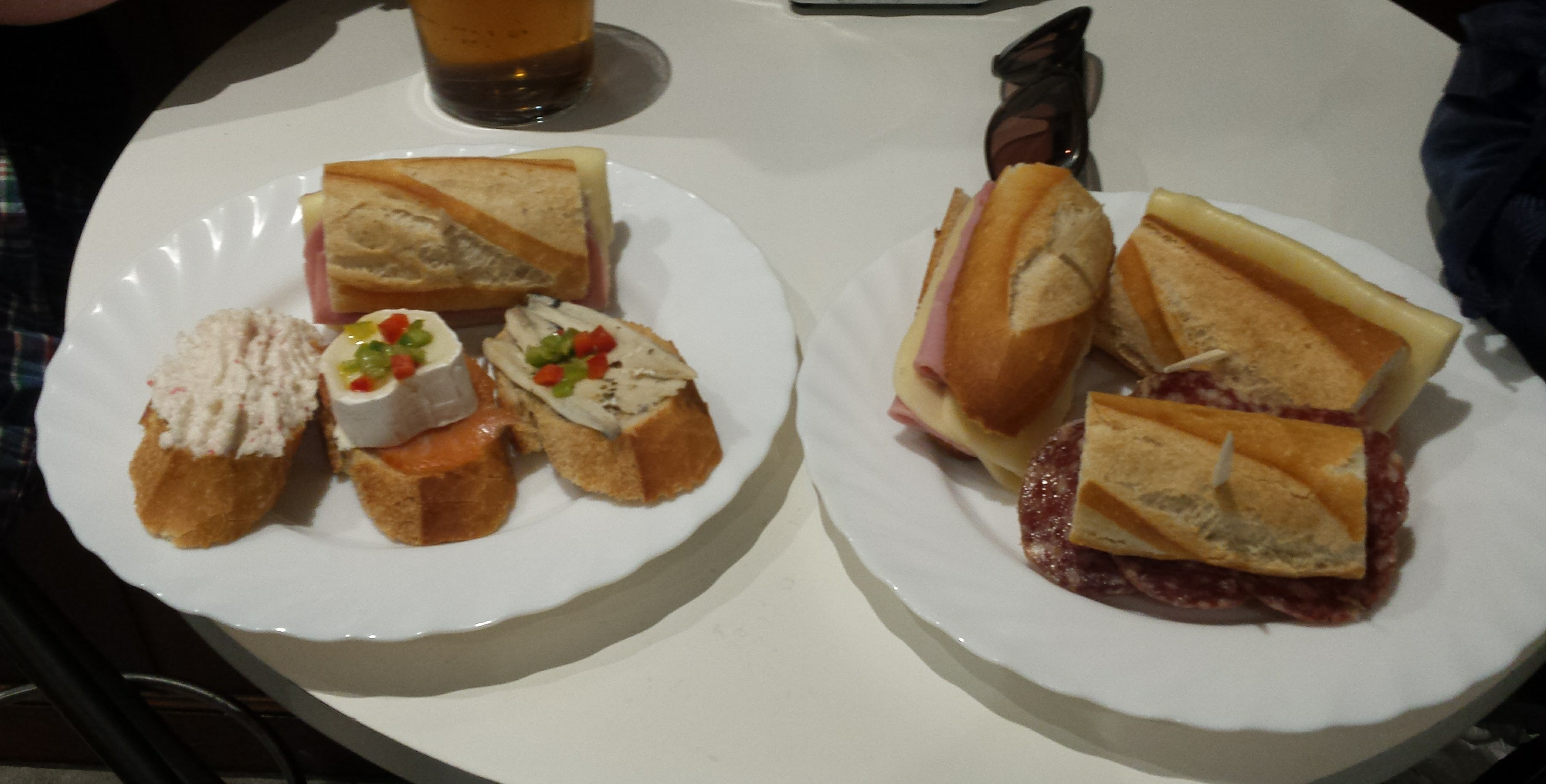 Of course its not all Michelin stars and pintxos – the city is full of restaurants if you’d prefer the option of a sit down meal. 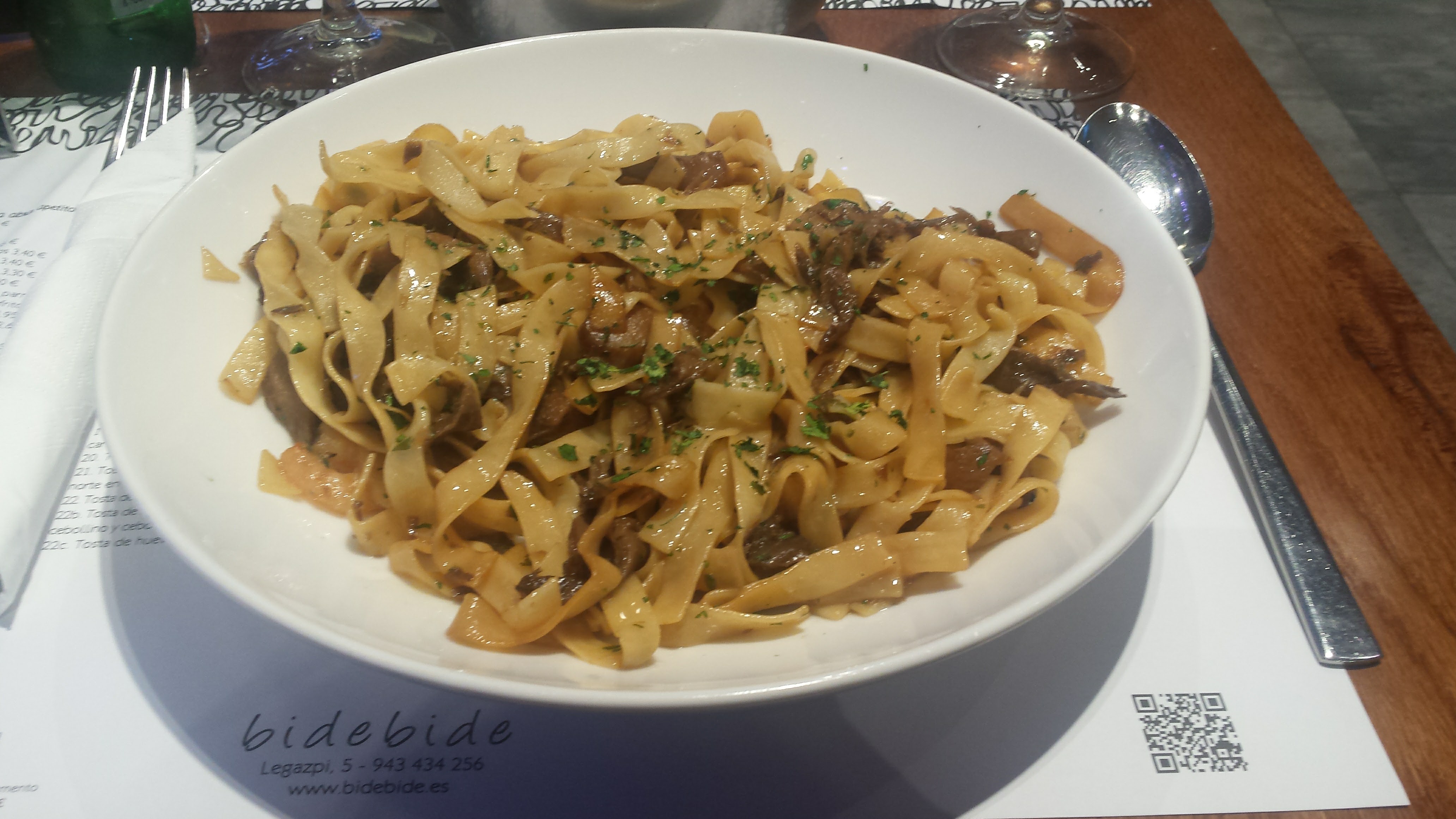 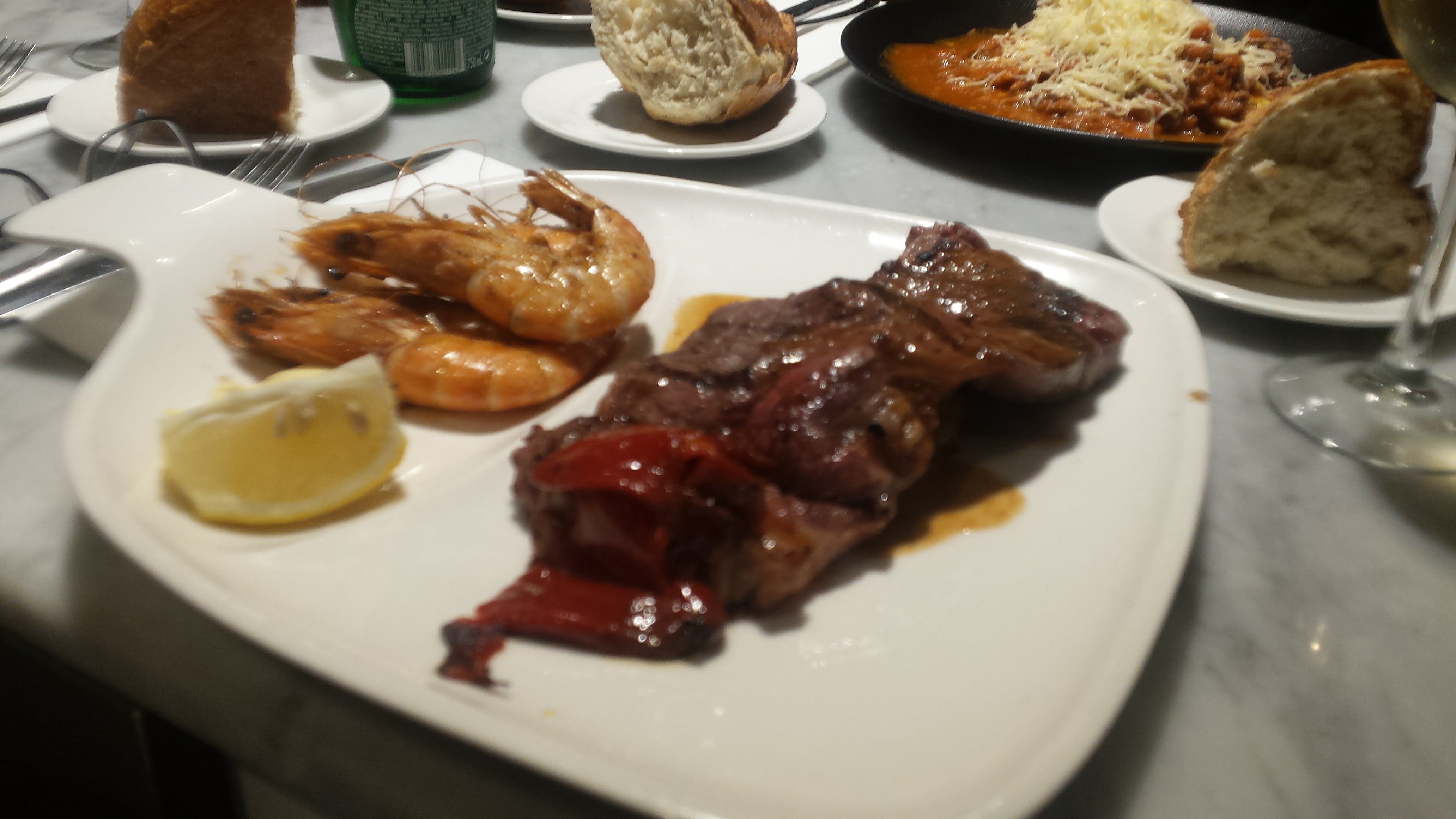 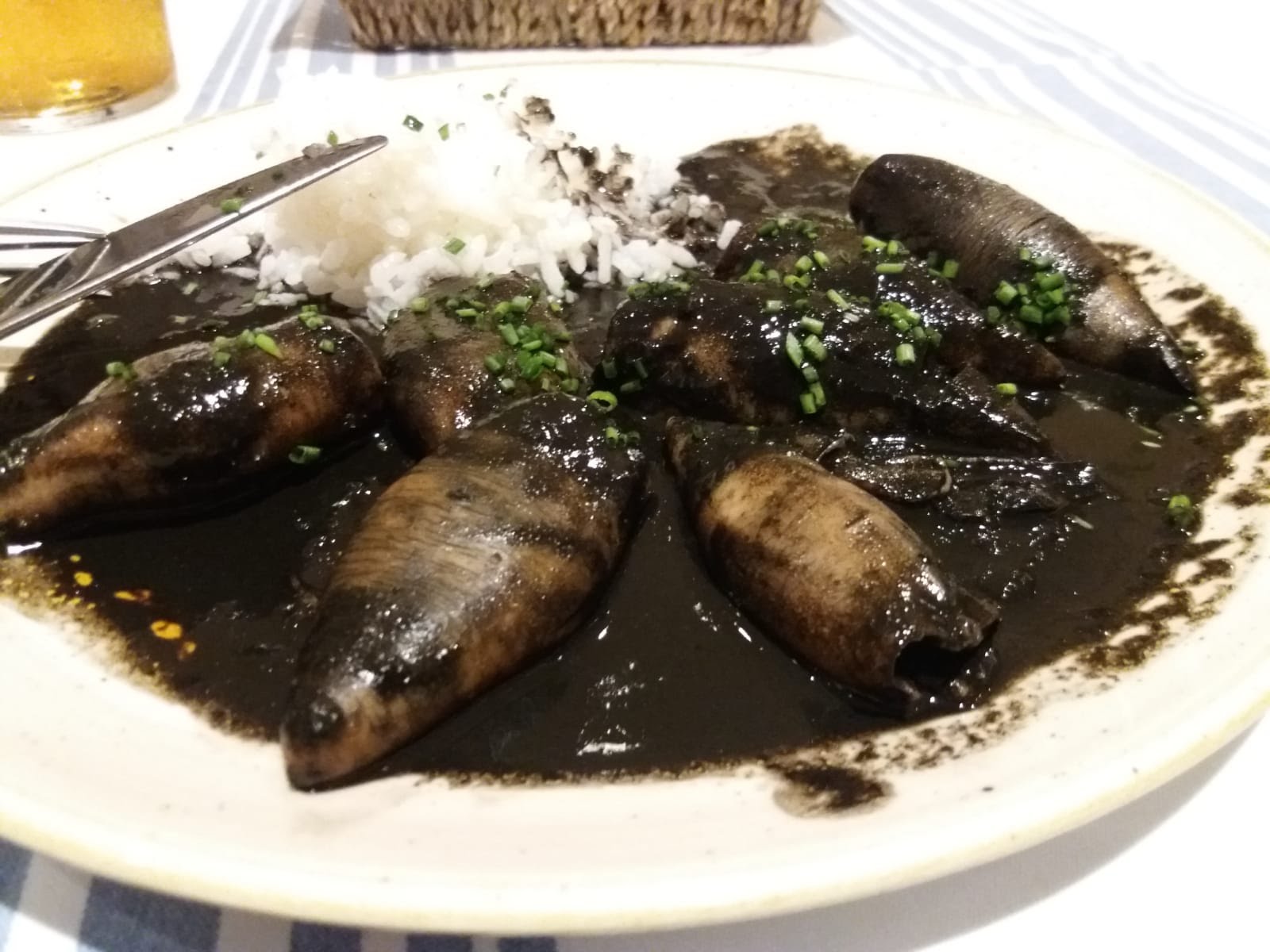 And something to wash it down with ….

And dessert?   It has to be the famous burnt cheesecake from La Vina! 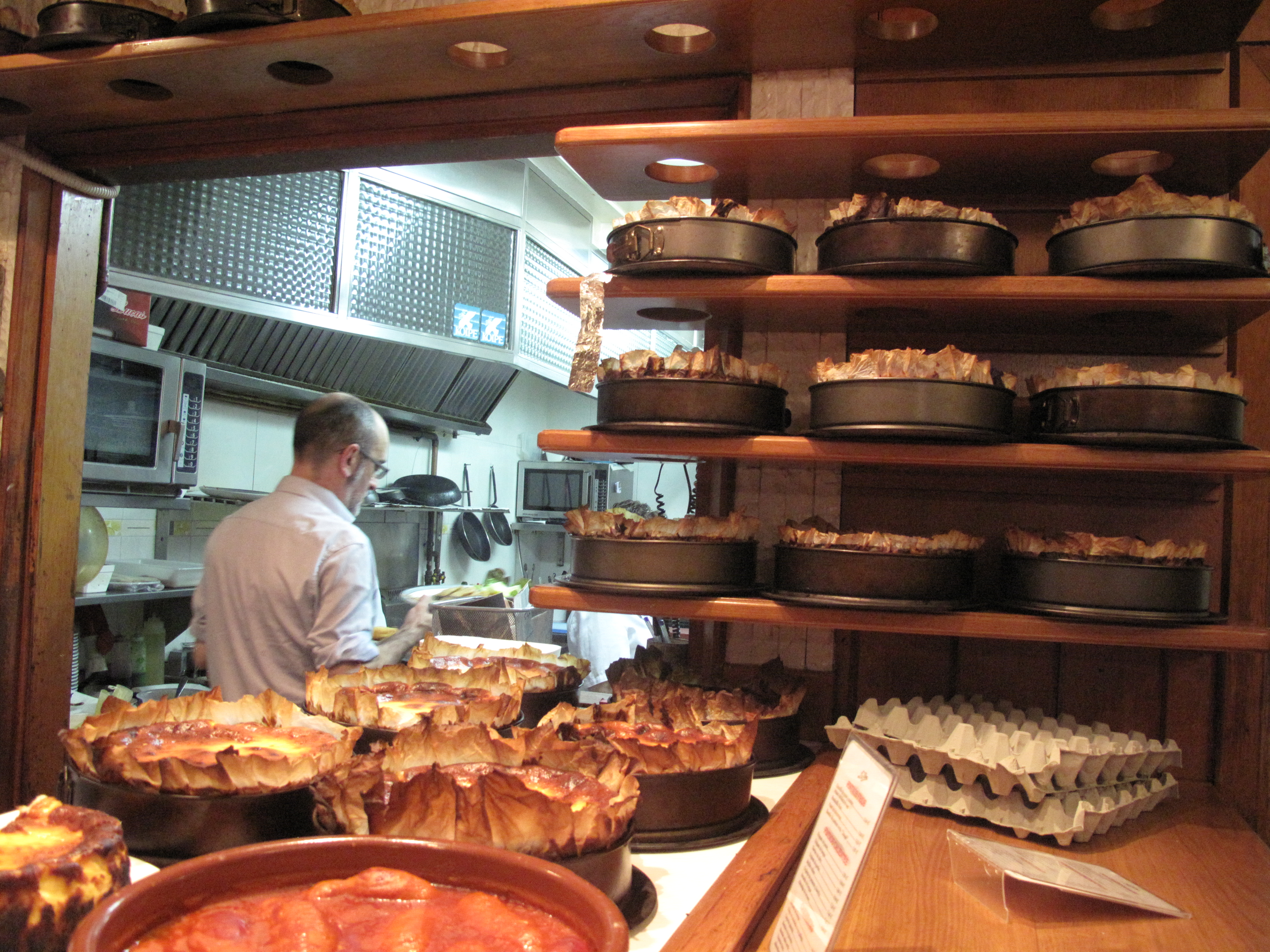 (2 slices and not sharing) 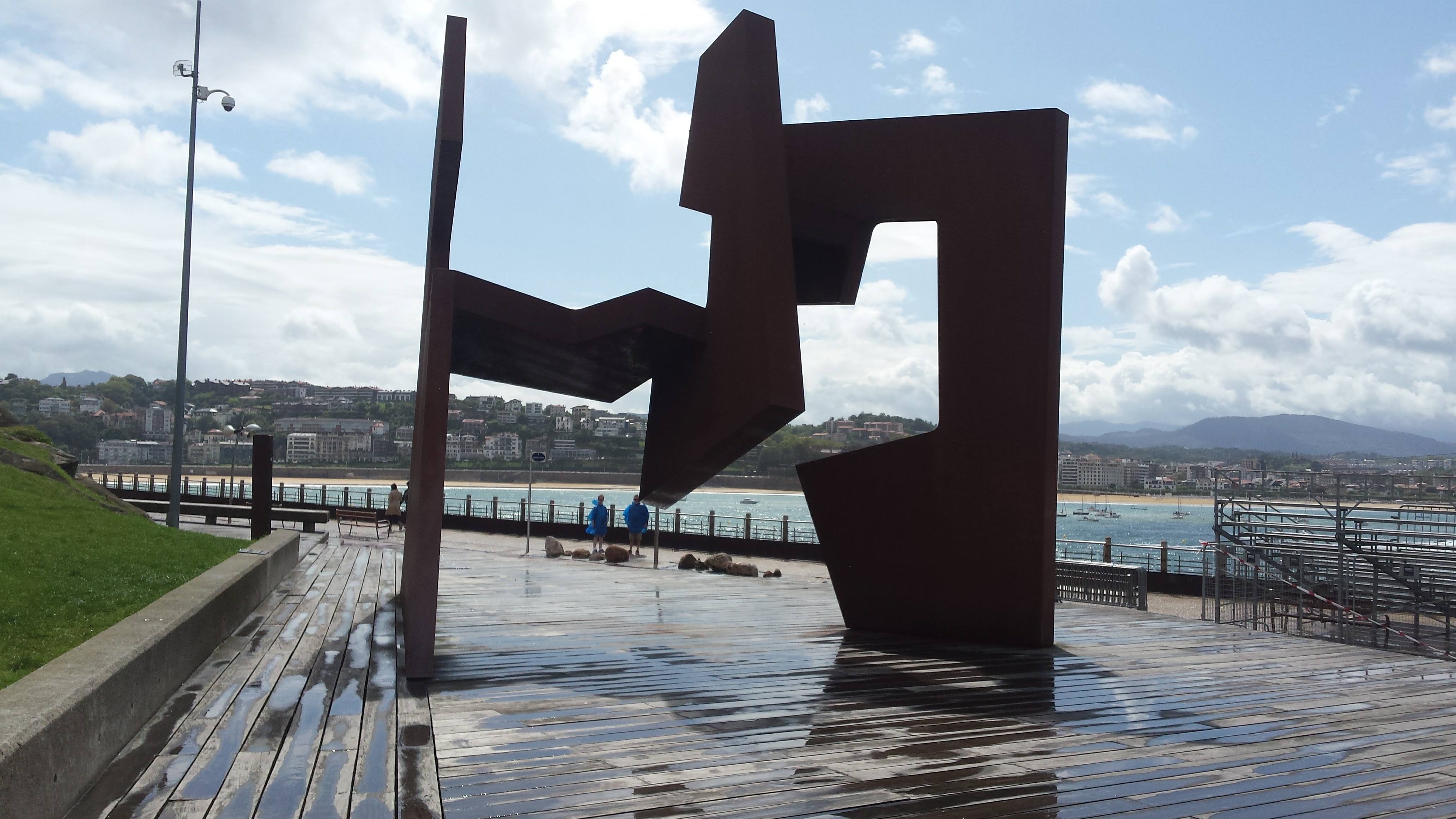