This west of Ireland town ticks all the boxes when it comes to selecting a staycation or when working on your itinerary for your Irish trip.   Located between mountains and sea,  it has won many awards over the years including a ‘Best Place to live in Ireland ‘ award in 2012.    Its happy residents however,  have no problem sharing this piece of utopia with you.    The landscapes are stunning,  there’s plenty to do and see and the food is great.   There really is something for everyone here!  Here’s just a few reasons to visit Westport  – but once you start researching the place you won’t need much convincing!

You can manage without a car

While the region is great for driving,  there’s plenty to do if you don’t have a car.

Firstly,  getting there.  As well as a regular bus service,  there is a railway system linking Dublin and Westport 4 times per day with the journey taking just over 3 hours.  Galway is 90 minutes away and also connected by bus.

In town,  Westport House is within walking distance.   There are plenty of bikes for hire if you wish to climb Croagh Patrick or explore the Greenway.  If your accommodation is a bit outside town, you can avail of the local taxi service.

If you enjoy hiking then you can climb Croagh Patrick

Its thought that the mountain has been a place of pilgrimage since the stone age.  Originally people gathered here at beginning of the harvest season.   Then in 441AD St. Patrick fasted here for 40 days.   People have climbed the mountain in his honour ever since.    On Reek Sunday (the last Sunday in July) around 25,000 people make a special pilgrimage to the top – many barefooted. 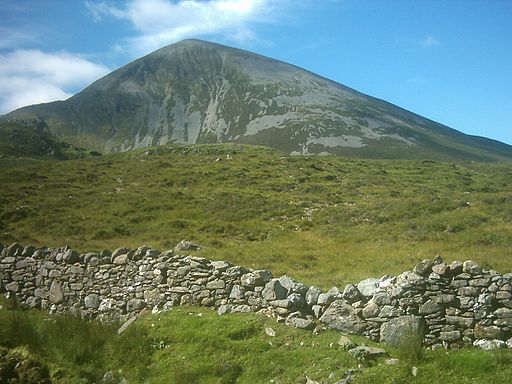 There is a bus service from Westport but you’re probably better off making your own way either by car,  bike or taxi.

The most popular route is the pilgrim route starting from the car park   It is a moderate to strenuous hike – the last third is tough with loose scree and can be slippery.   You need to allow 2-3 hours to ascend and 1.5 – 2 hours for the return.

They suggest you pack for all four seasons as weather can vary frequently here in the course of a day.    You will need food,  water,  a walking stick,  decent footwear and rain gear.

The visitors’ centre has a shop,  restaurant,  showers, lockers, etc. 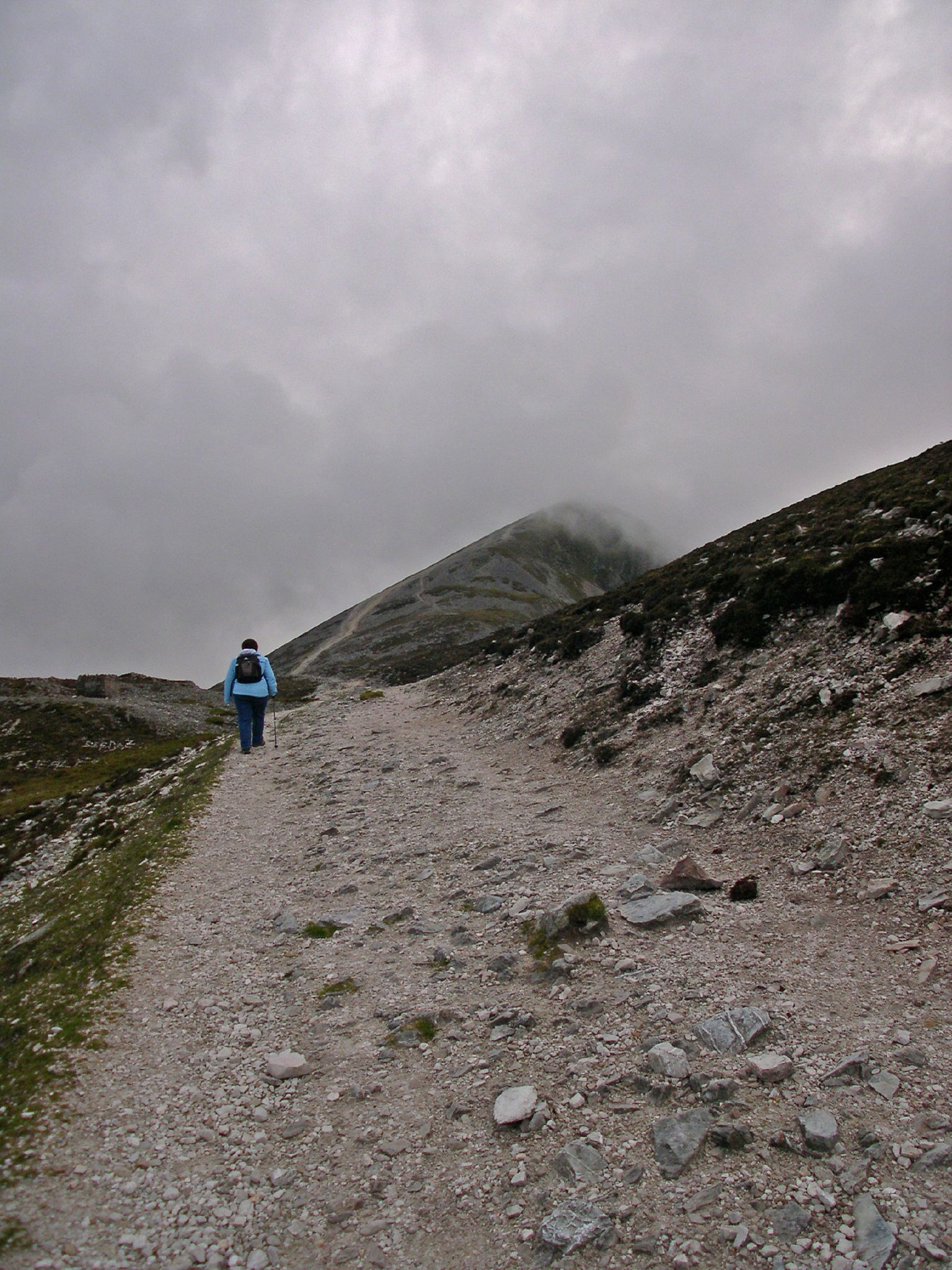 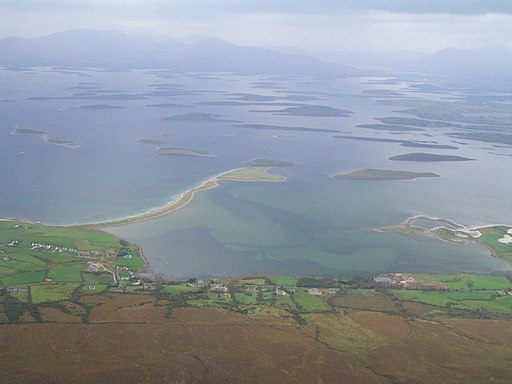 …and of course now you have a story to tell… 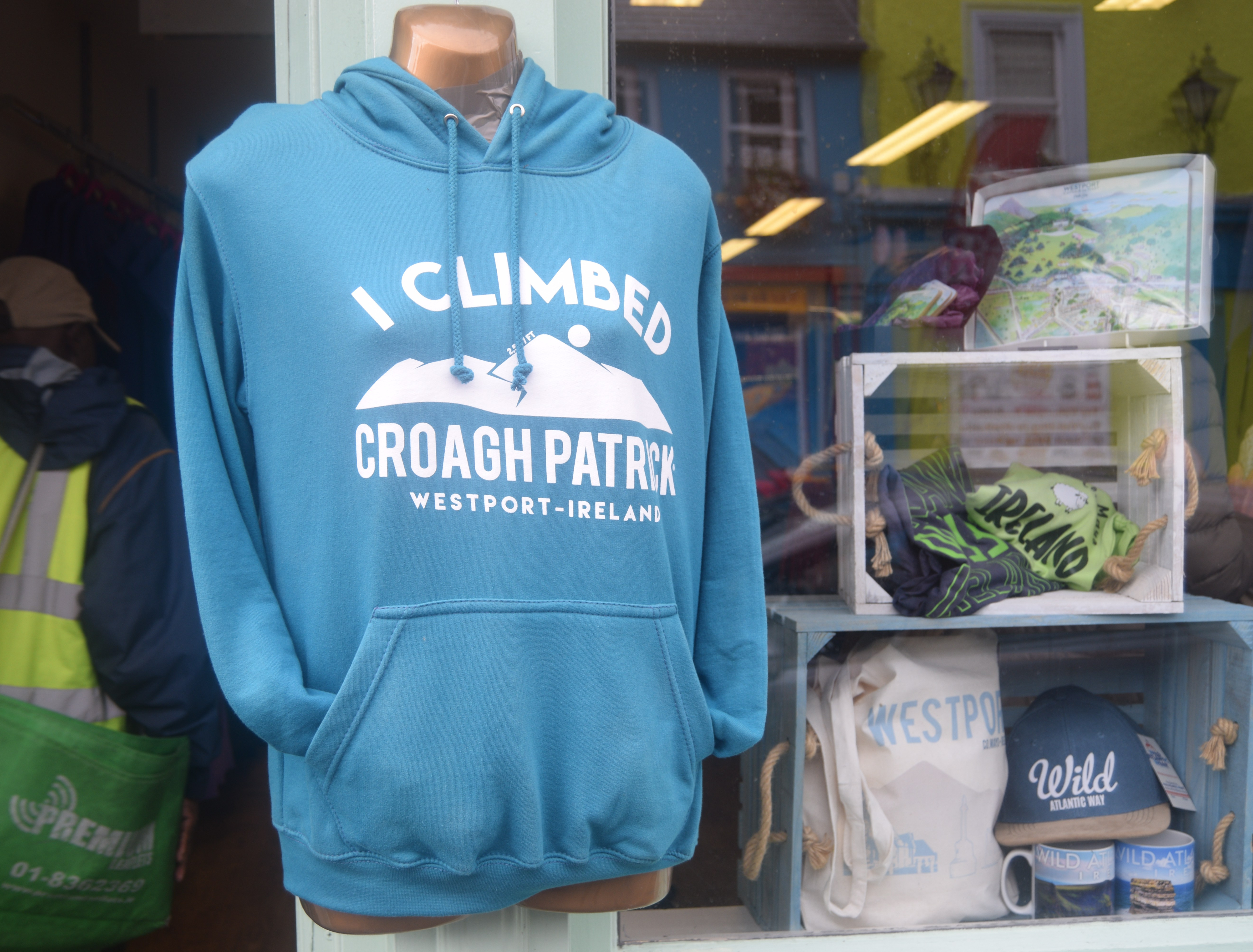 You can cycle the Great Western Greenway

At  42km,  the Greenway is the longest off-road cycling and walking trail in Ireland.  It stretches from Westport to Achill Island and follows the route of the old railway.  Over a quarter of a million people use the trail annually which runs through stunning countryside.   The going is mostly fairly flat with a few inclines along the way – especially near the towns. 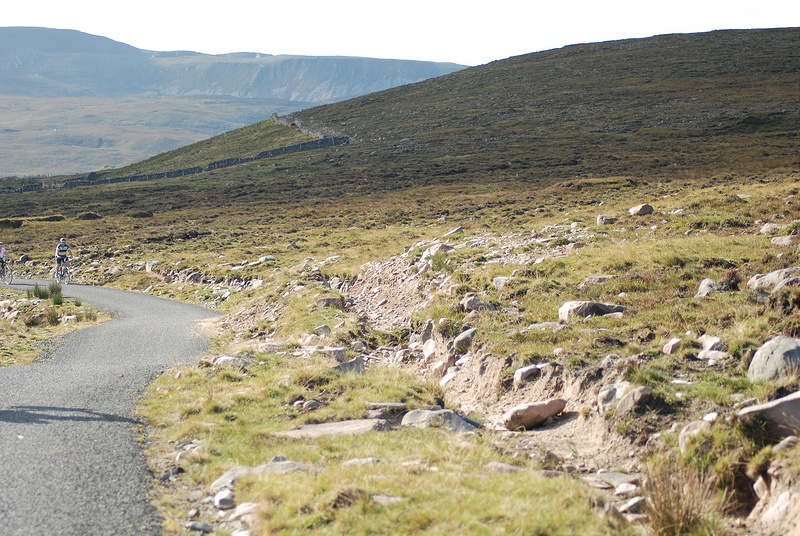 The route is divided in three main sections: 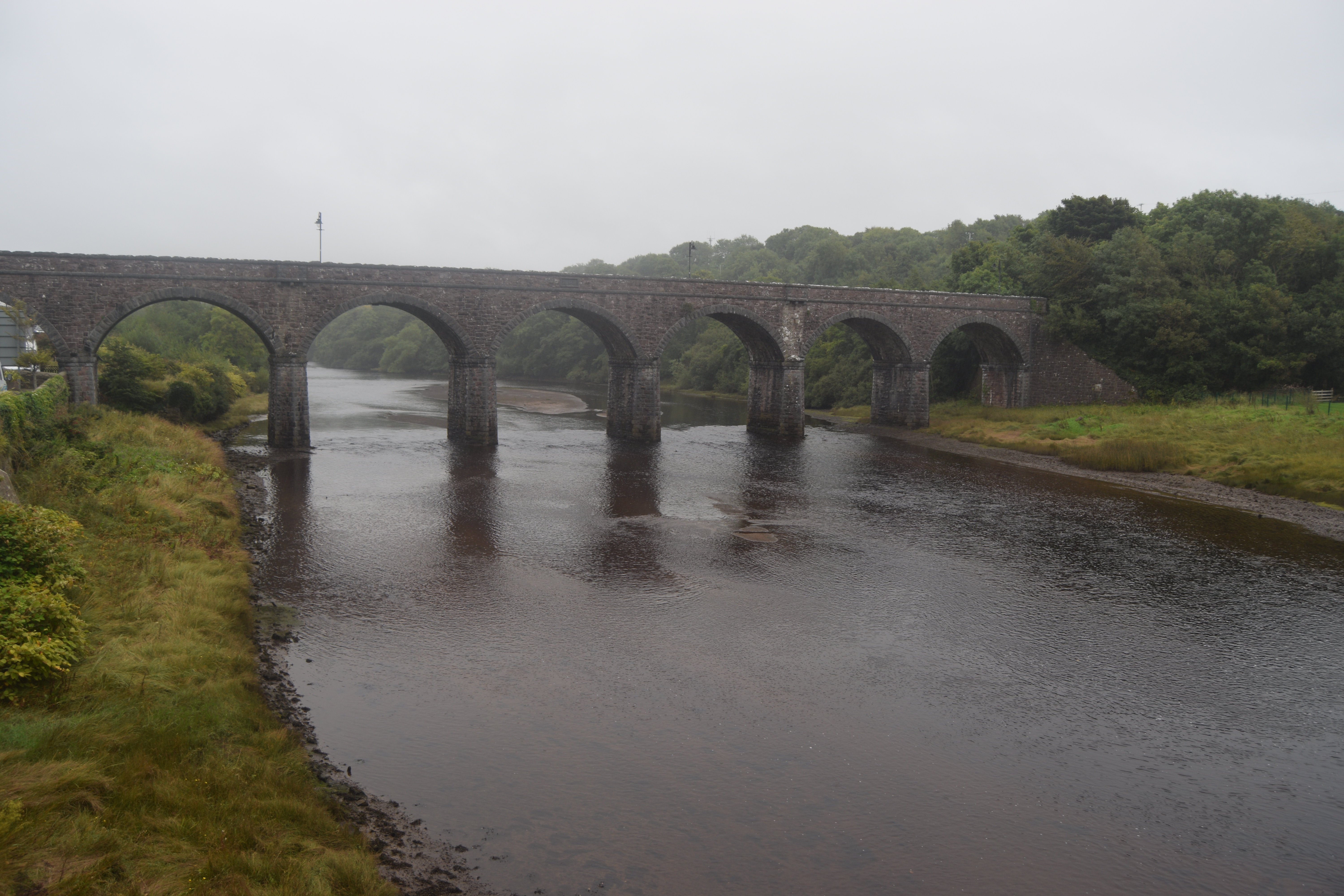 There are plenty of bikes for hire in Westport – including electric bikes (so no excuses!!).  The rental companies offer a one way option – cycling in one direction and riding a shuttle bus in the other.   (e.g. – you could take the shuttle to Achill and cycle back to Westport).  A lot of people are happy to just cycle as far as Newport for lunch or a coffee and then head back.   Bike hire is around €20 per day or €40 for an electric bike and add another €10 for the shuttle. 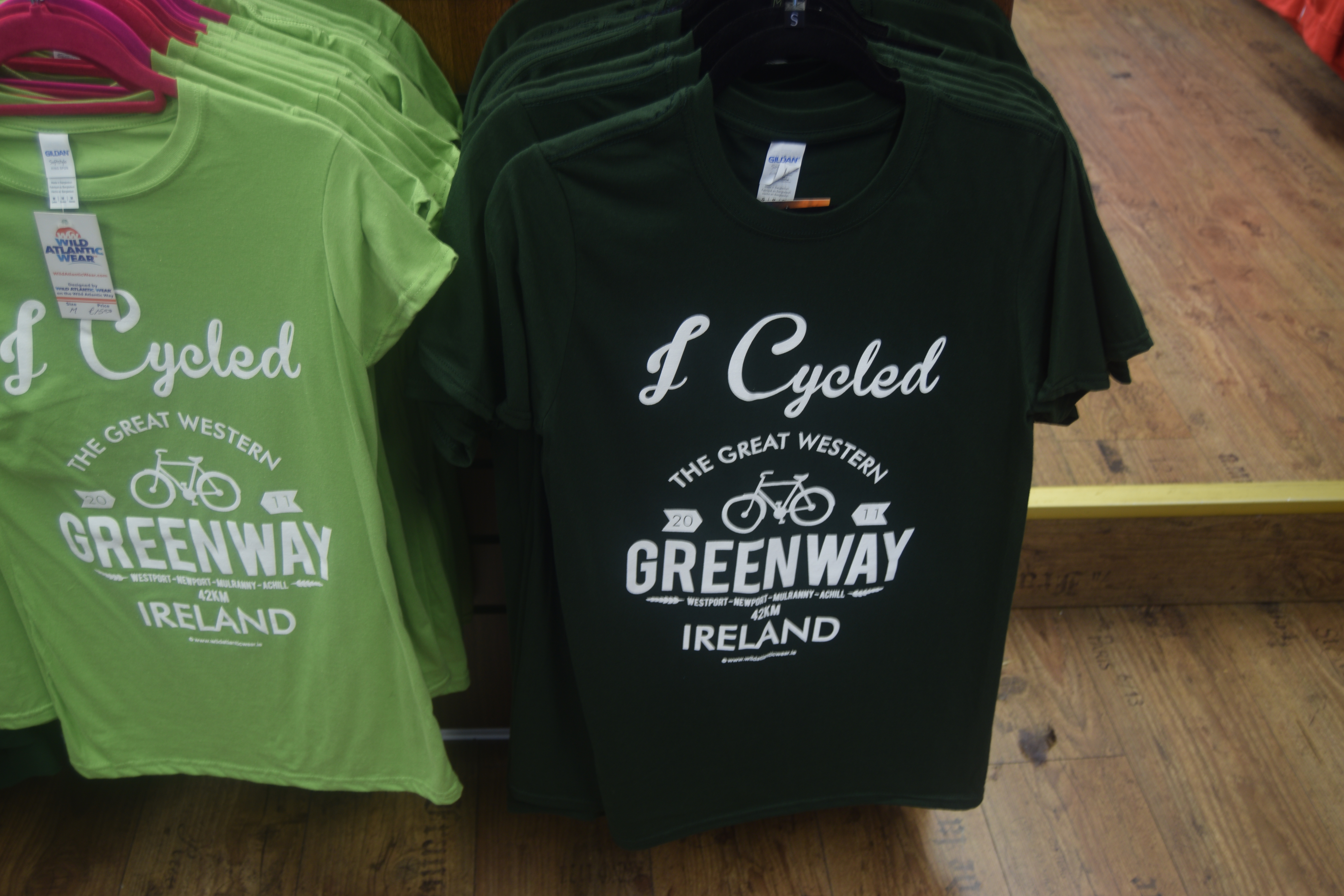 You can Visit Westport House

A short walk from the town centre will bring you into the grounds of Westport House.  Covering 480 acres,  the parkland overlooks Clew Bay and Croagh Patrick.  You can stroll through the woodland and terraces or follow the trail along the river and around the lake. 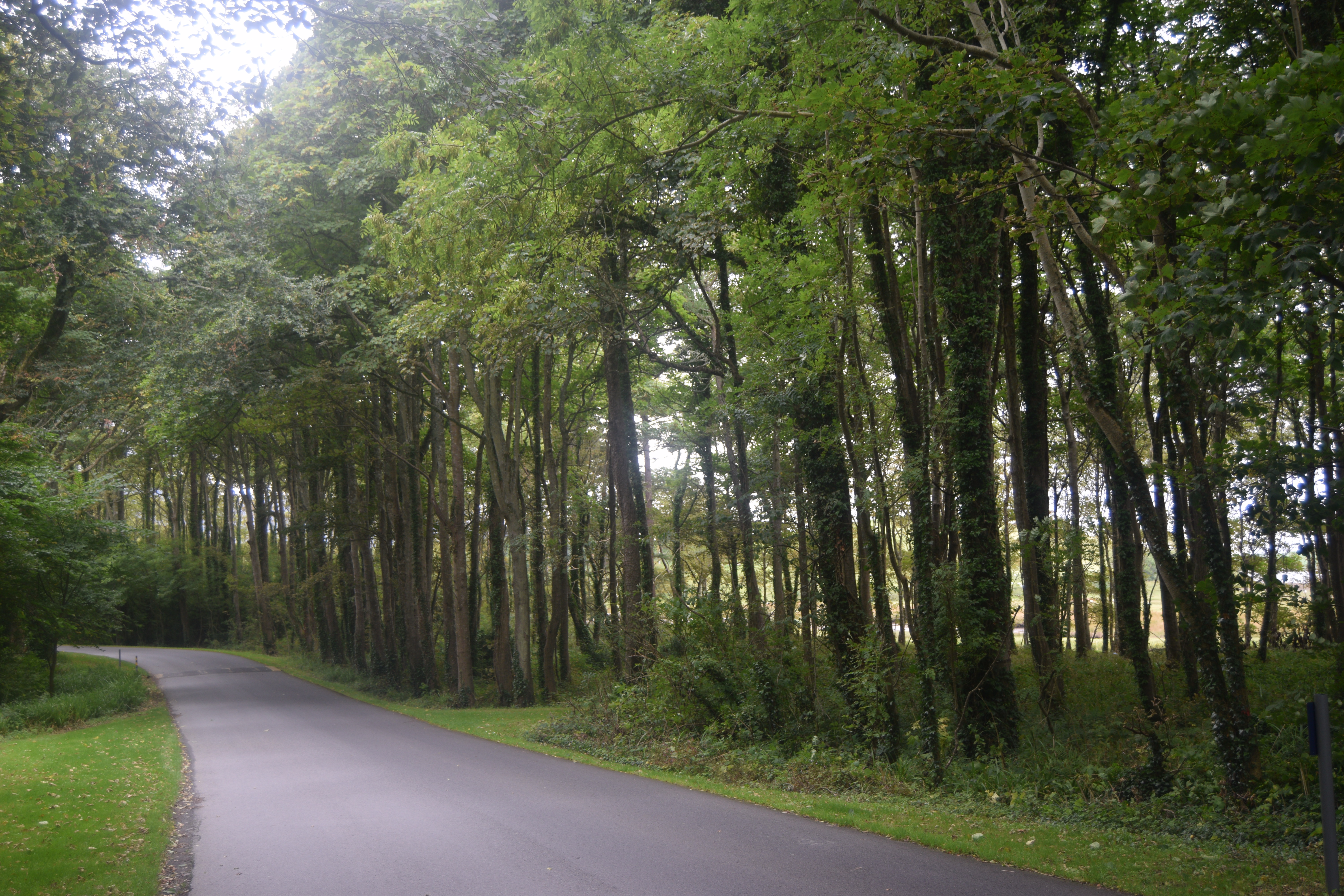 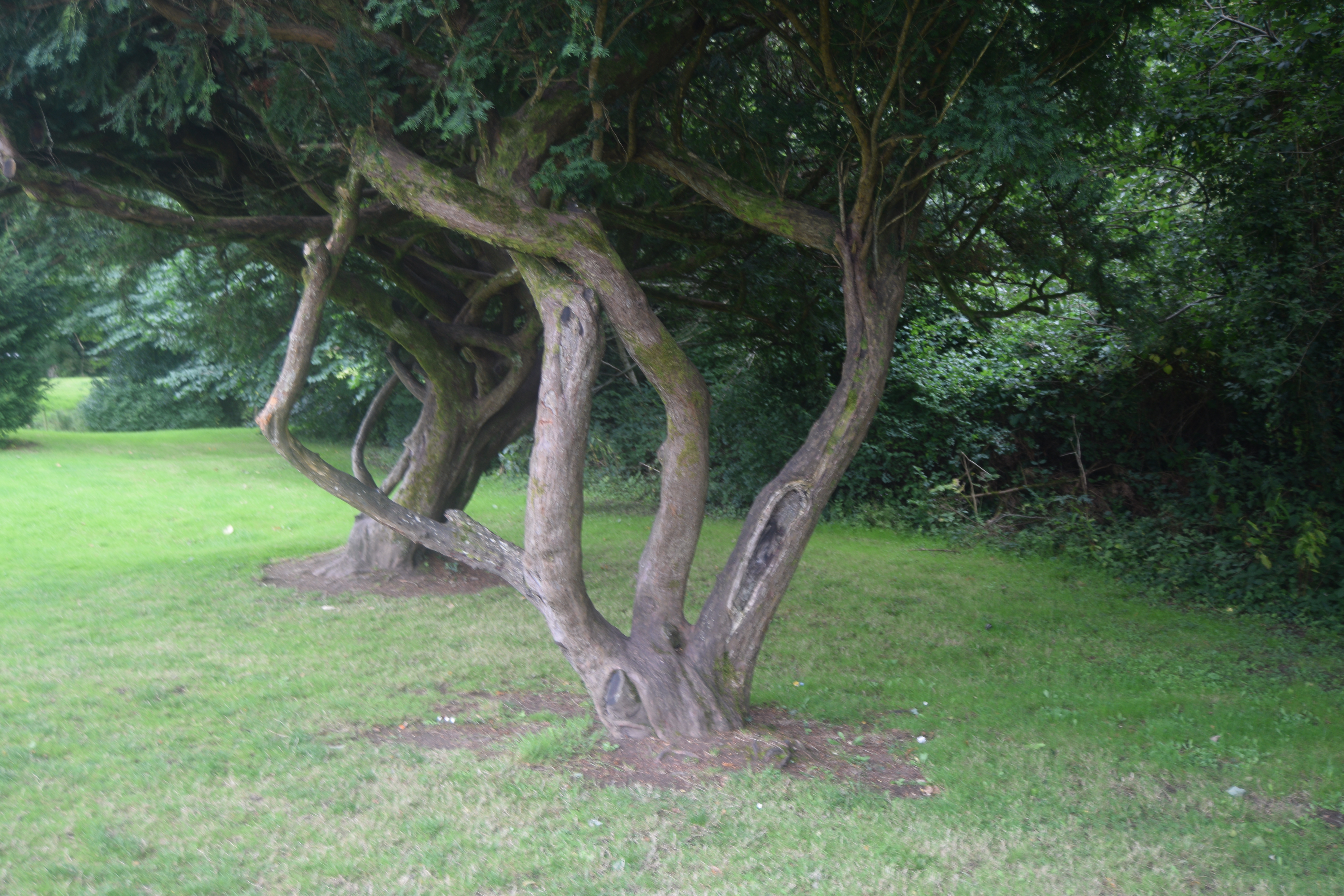 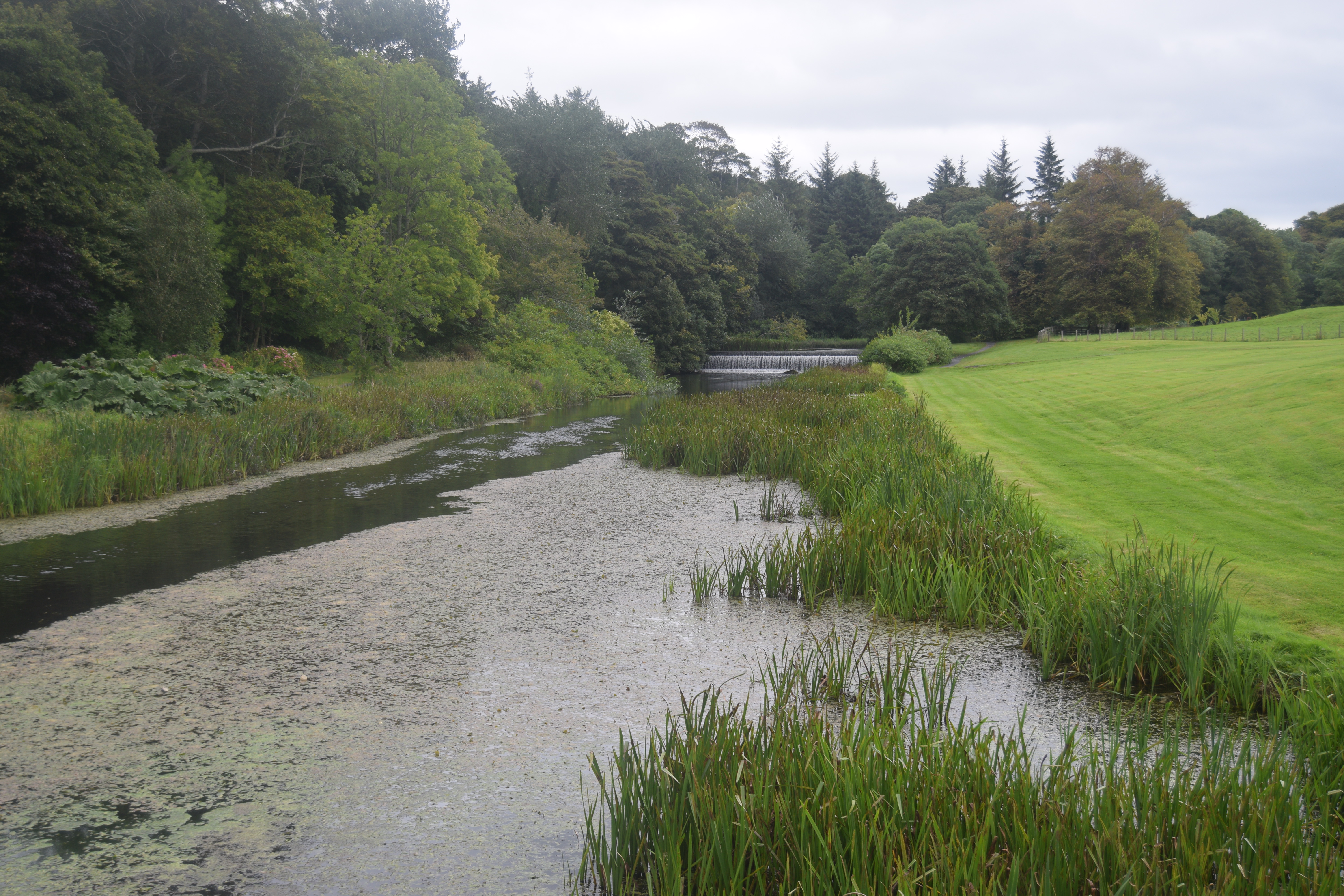 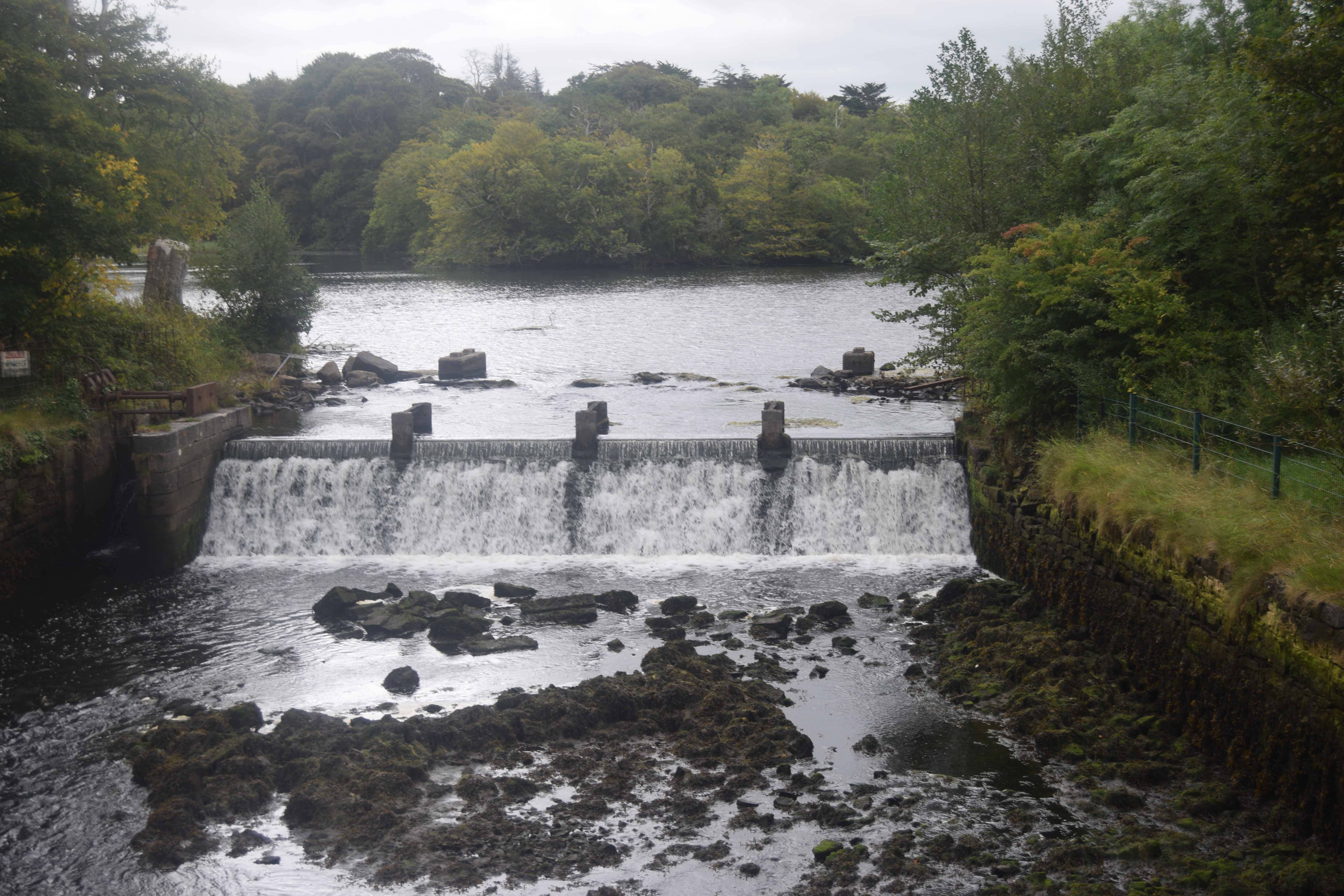 The house itself was built on the site of a castle owned by the 16th century Pirate Queen,  Grace O’Malley,  and was privately owned by her direct descendants until 2017! 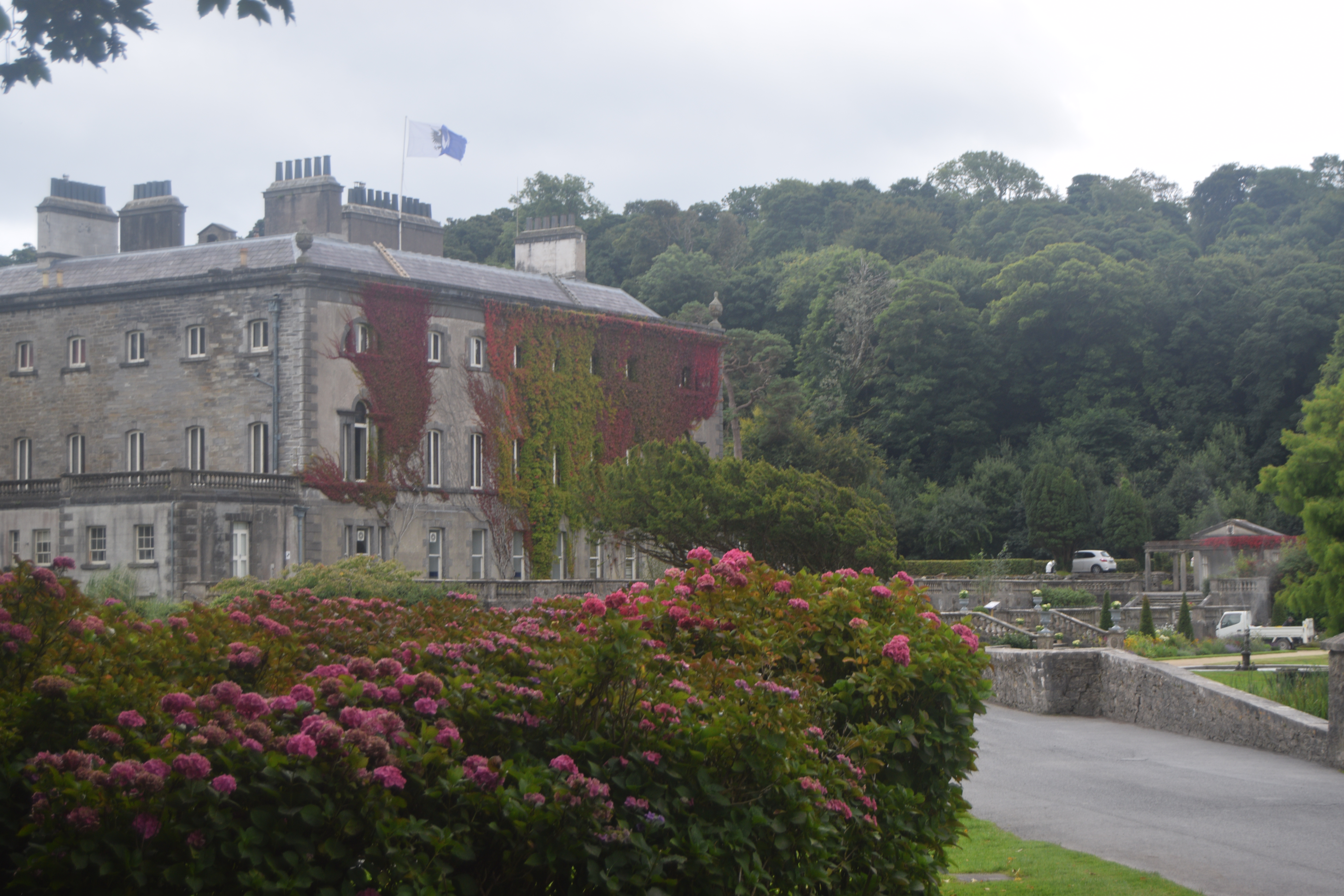 If big houses are your thing then you can join a tour through more than 30 rooms.  Tickets cost €13 (slight discount if you buy online).   The tours are guided during the summer months and self-guided the rest of the time.   You can also indulge in afternoon tea there in July and August. 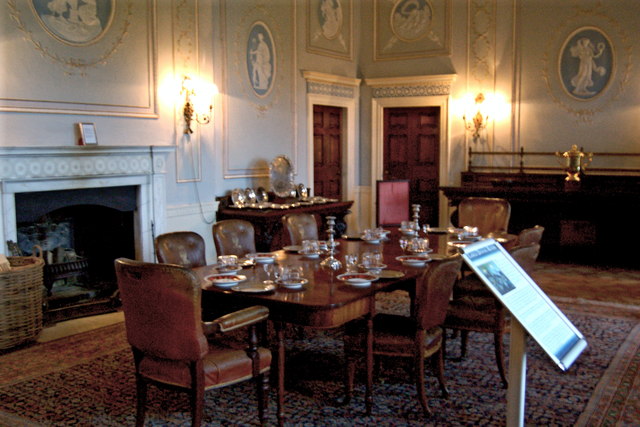 A Pirate Adventure Park is located on the grounds and the Westport Train Tour starts and finishes  here. 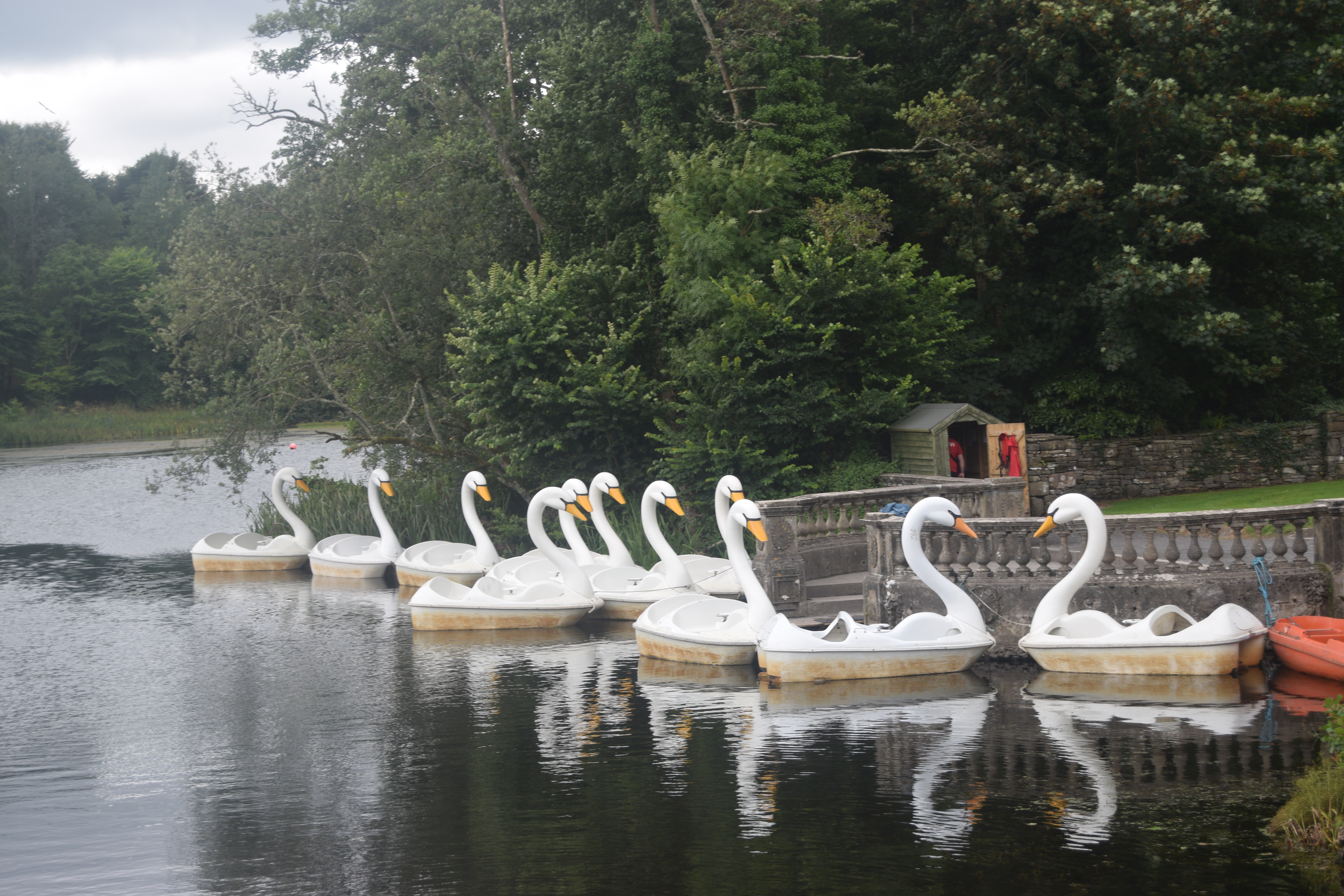 You can just stay in town and join a walking tour or wander on your own. 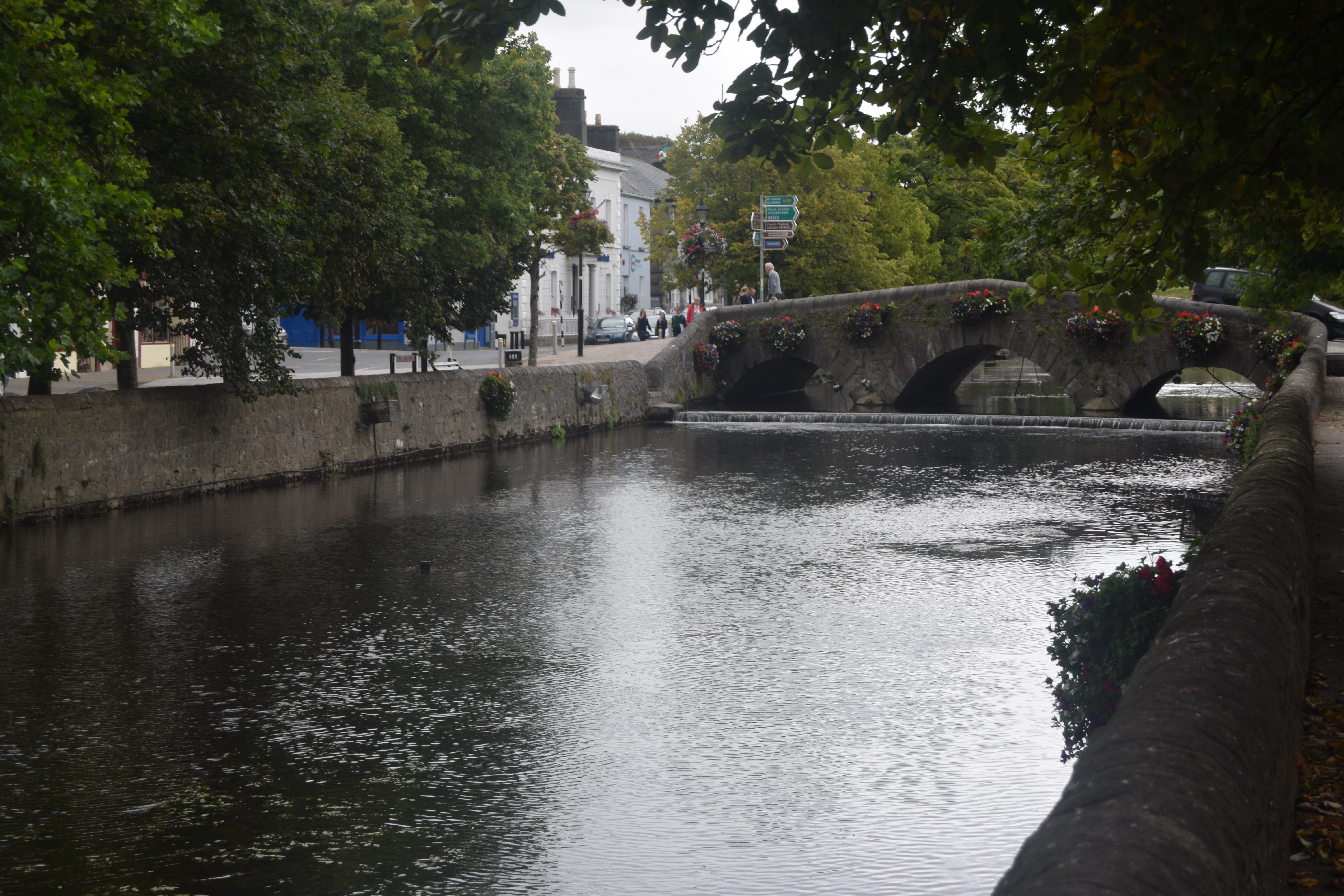 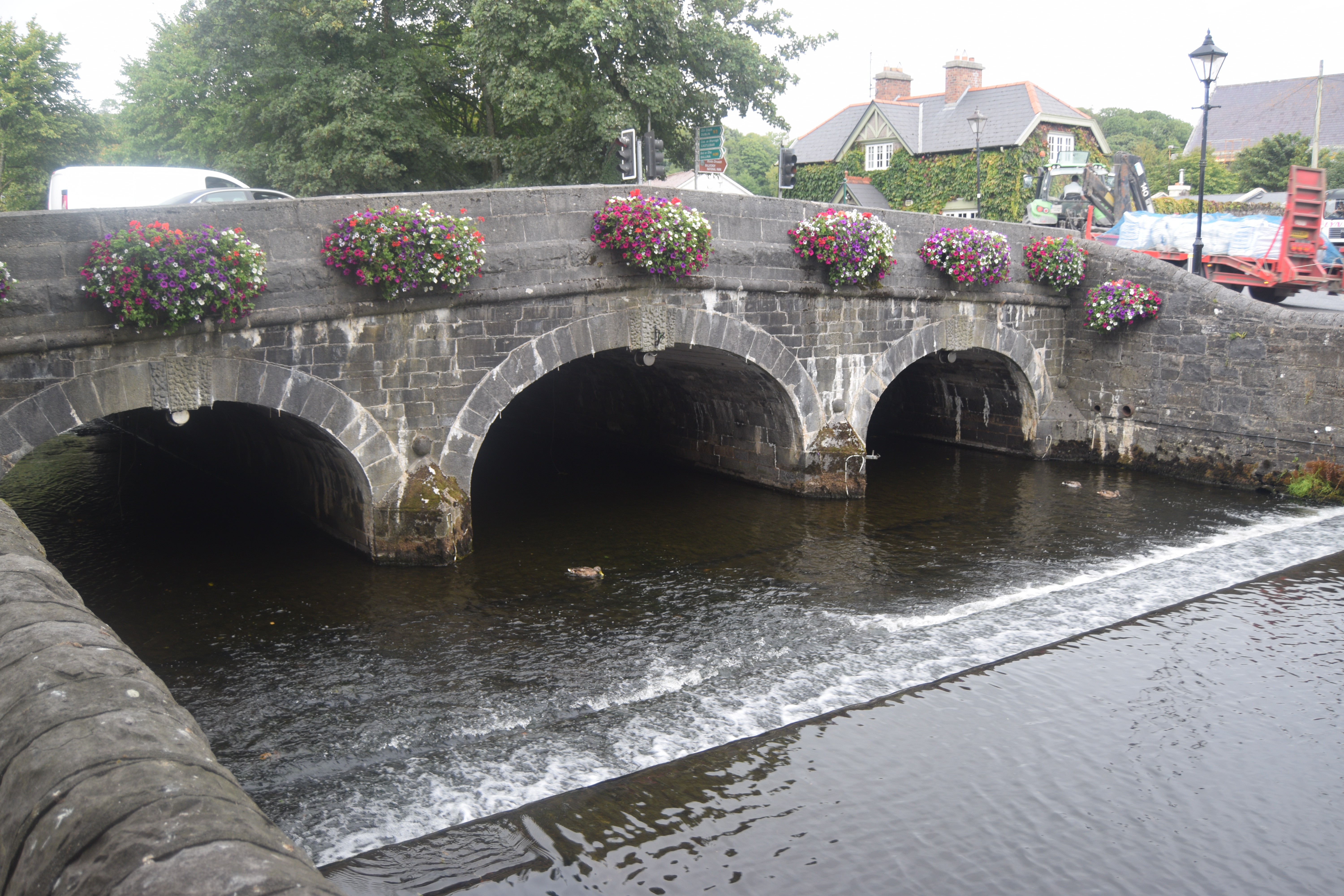 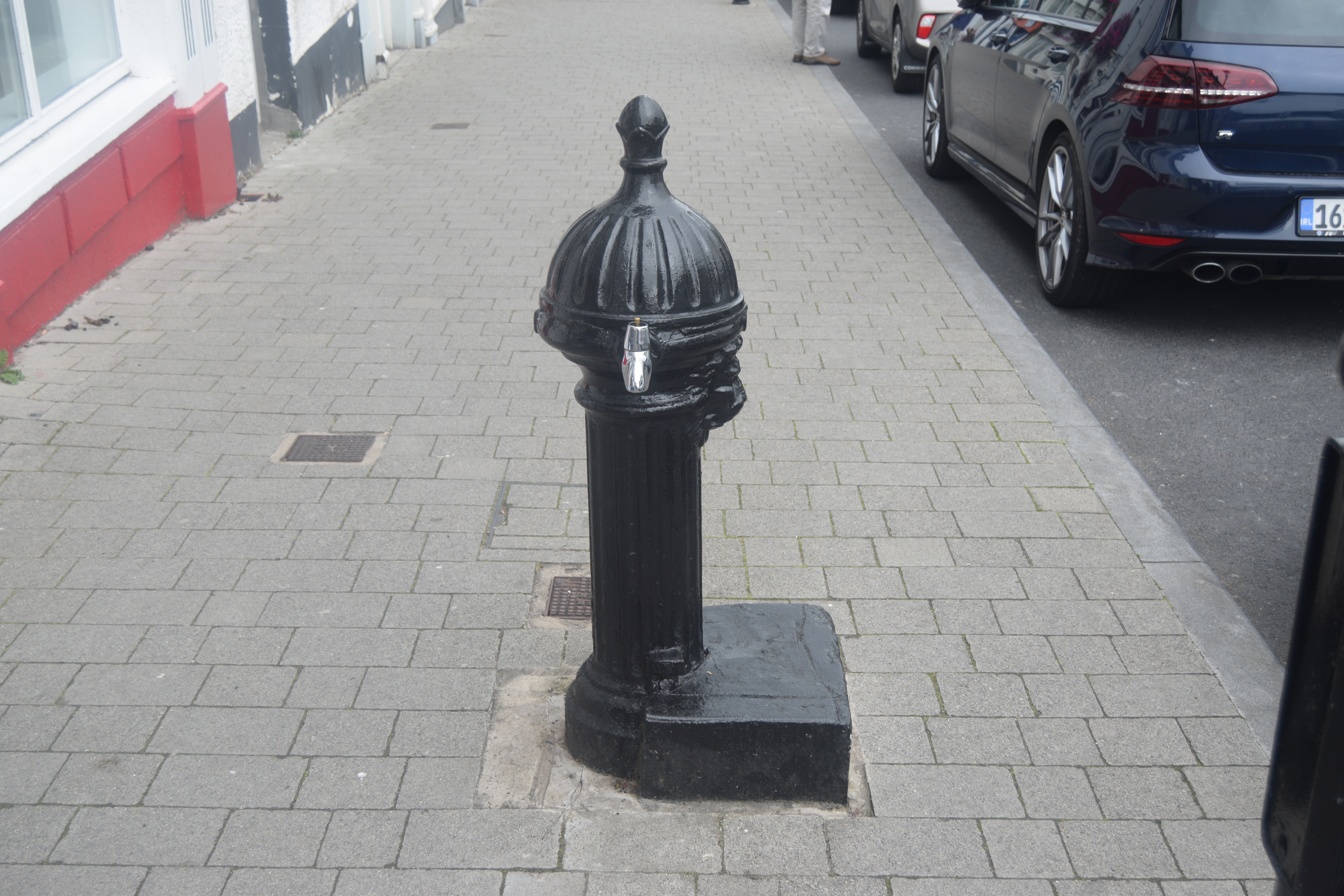 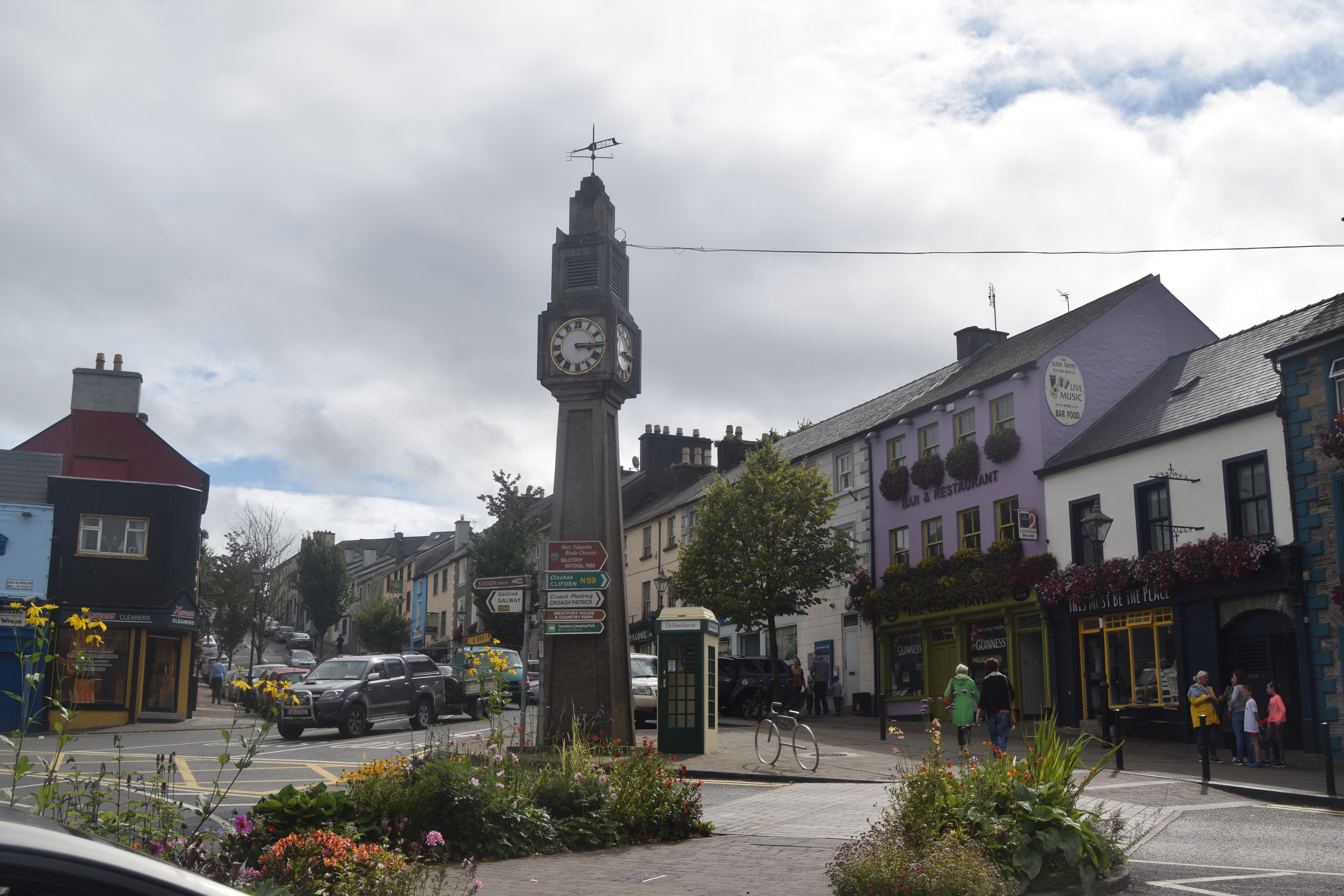 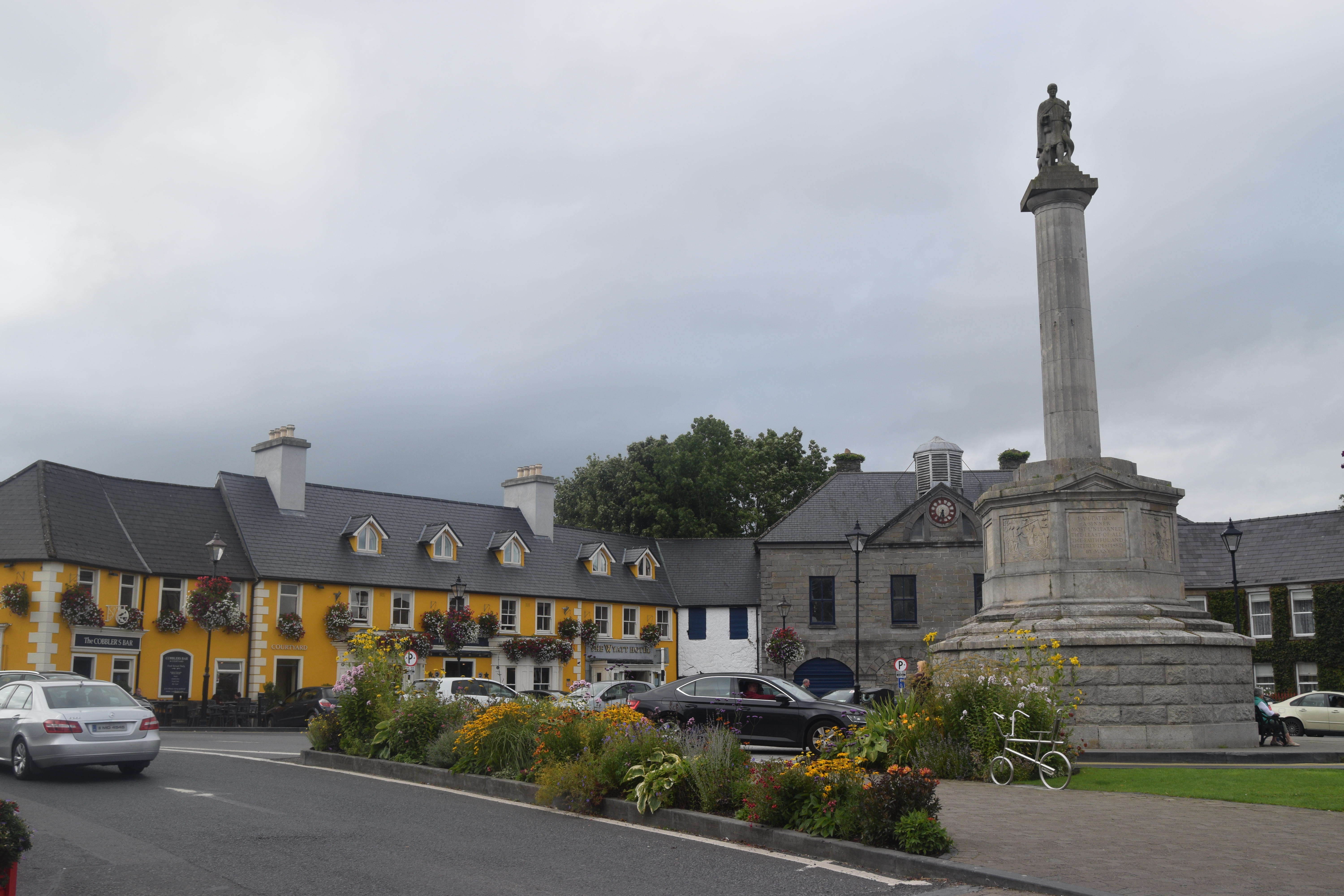 (The  monument on the Octagon was erected in 1845 in honour of George Glendenning who was an agent of the Bank of Ireland.  During the civil war the statue was used for target practice and the head was shot off in 1922!   It was removed in 1943 and a statue of St Patrick replaced it in 1990) 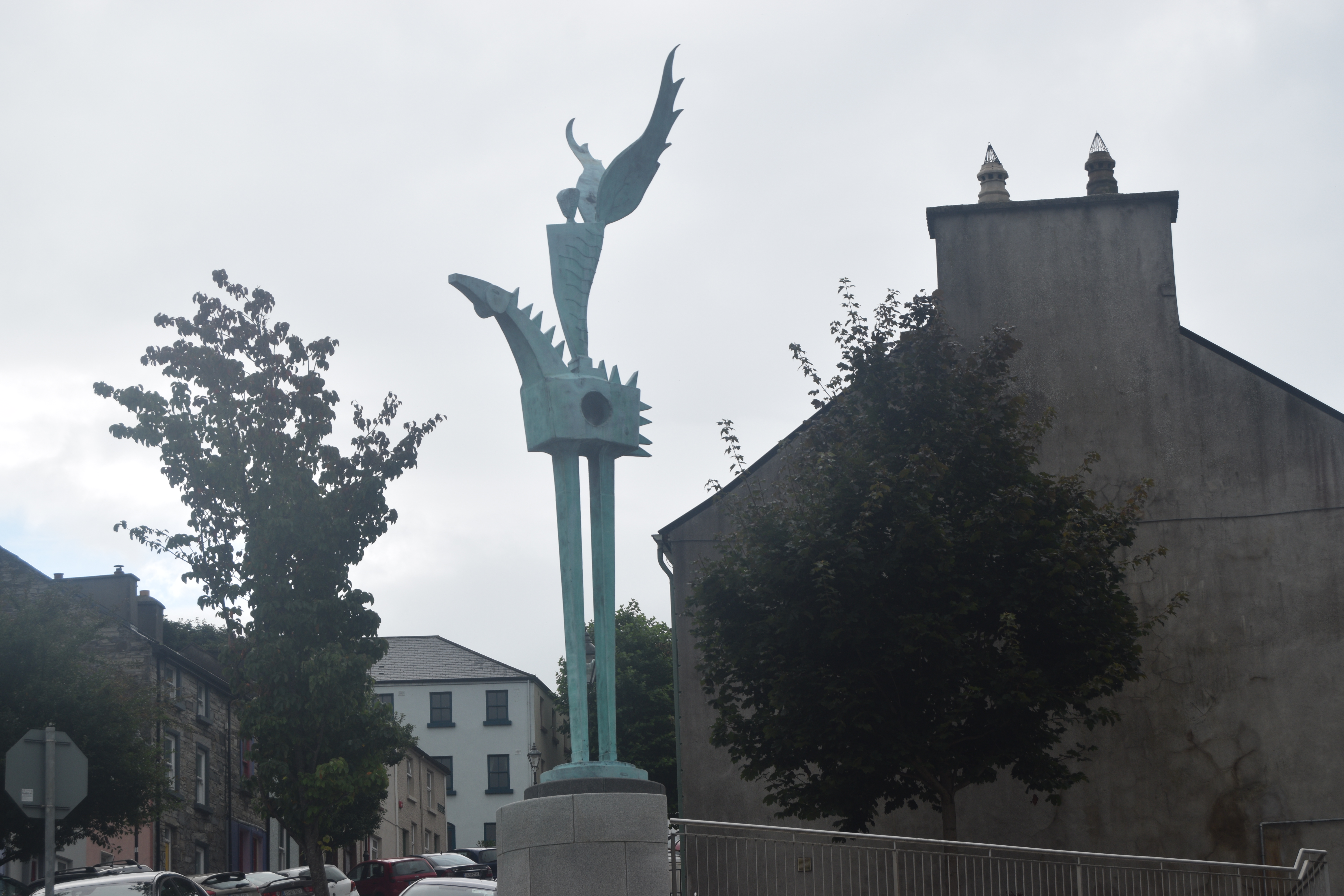 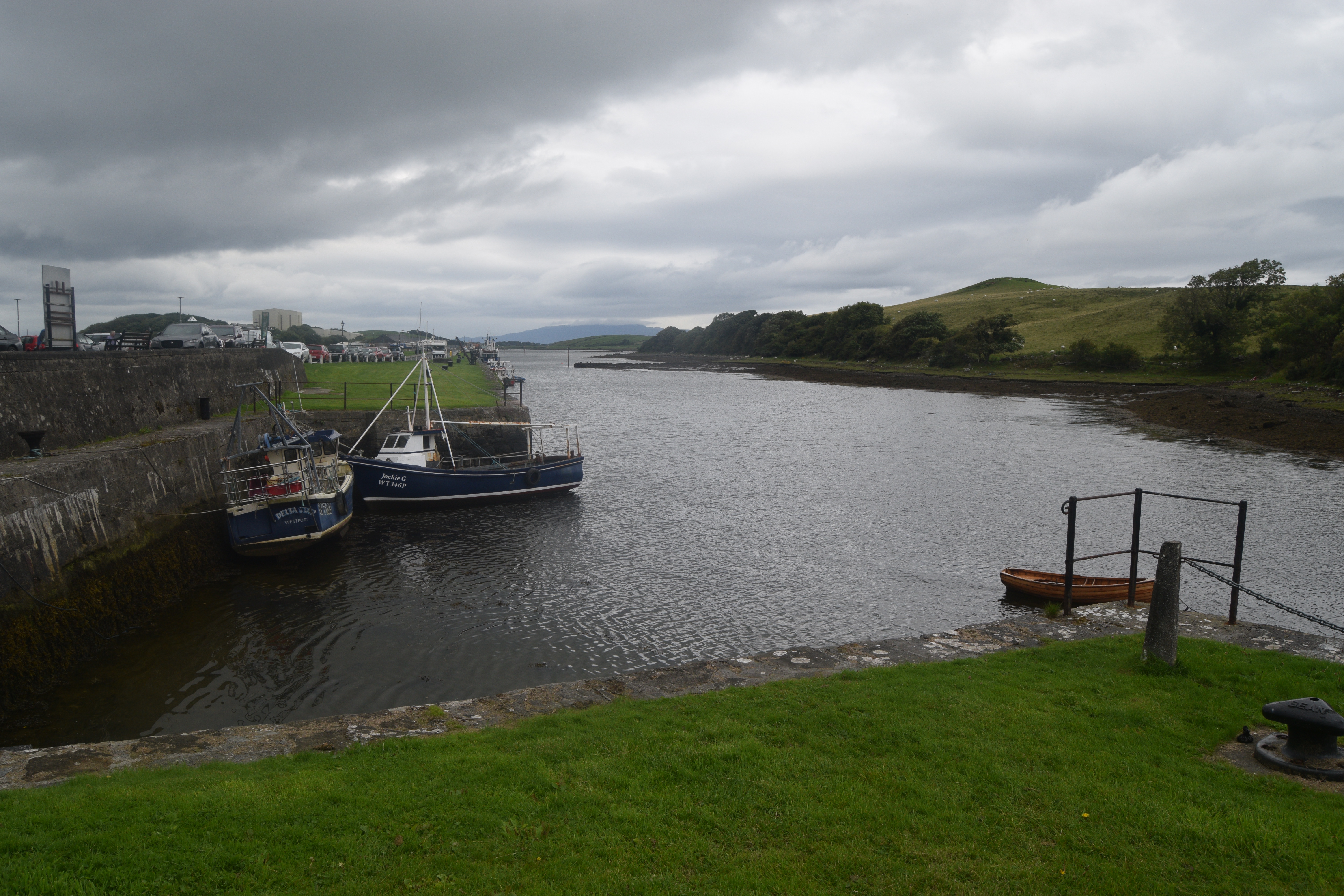 You  can walk to the Quay area which has its own shops,  pubs and restaurants. 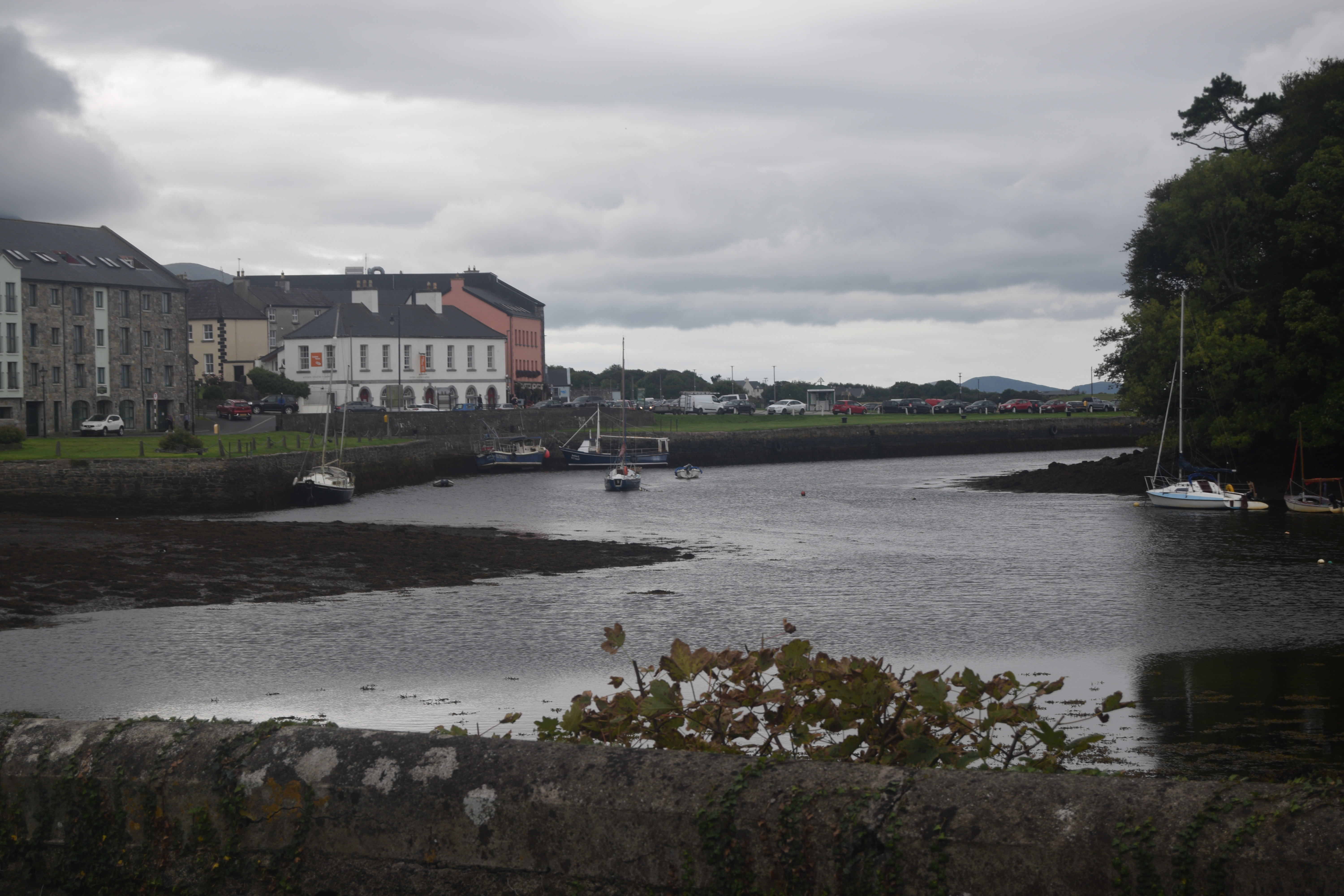 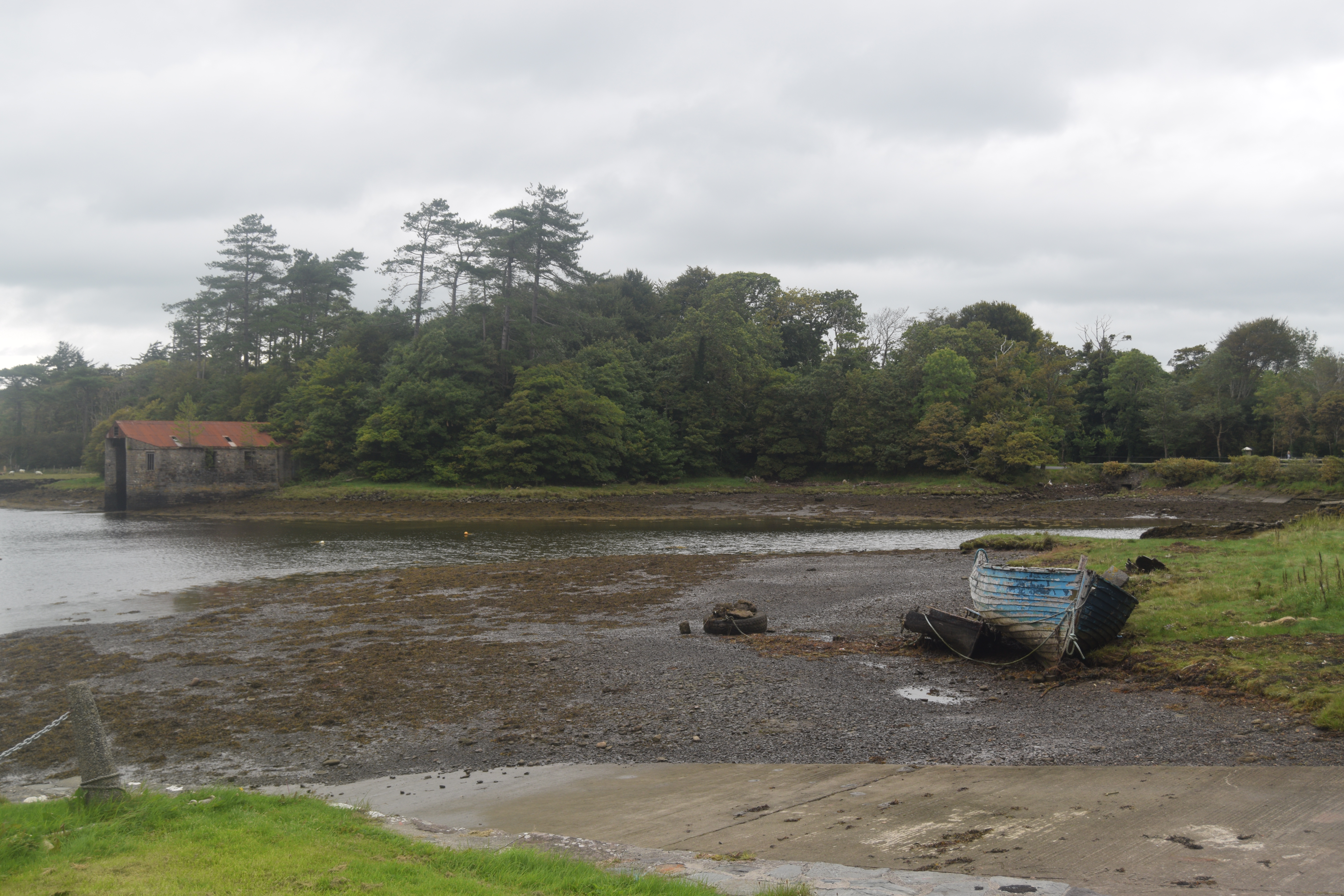 If you really hate fresh air then there are plenty of shops,  pubs,  cafes and restaurants to keep you busy!!

(You won’t be stuck for a cup of coffee!)

(This town will never run dry!) 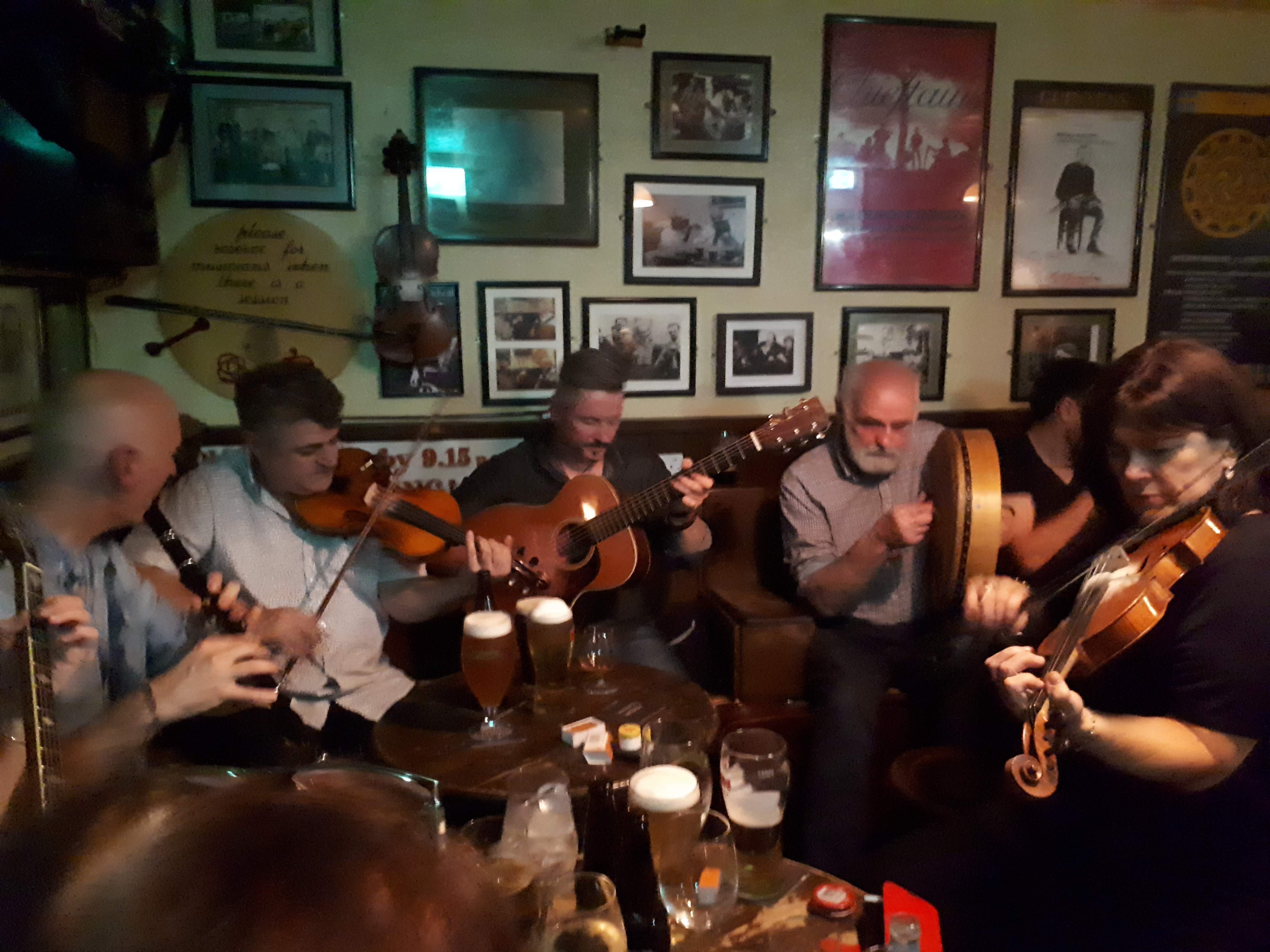 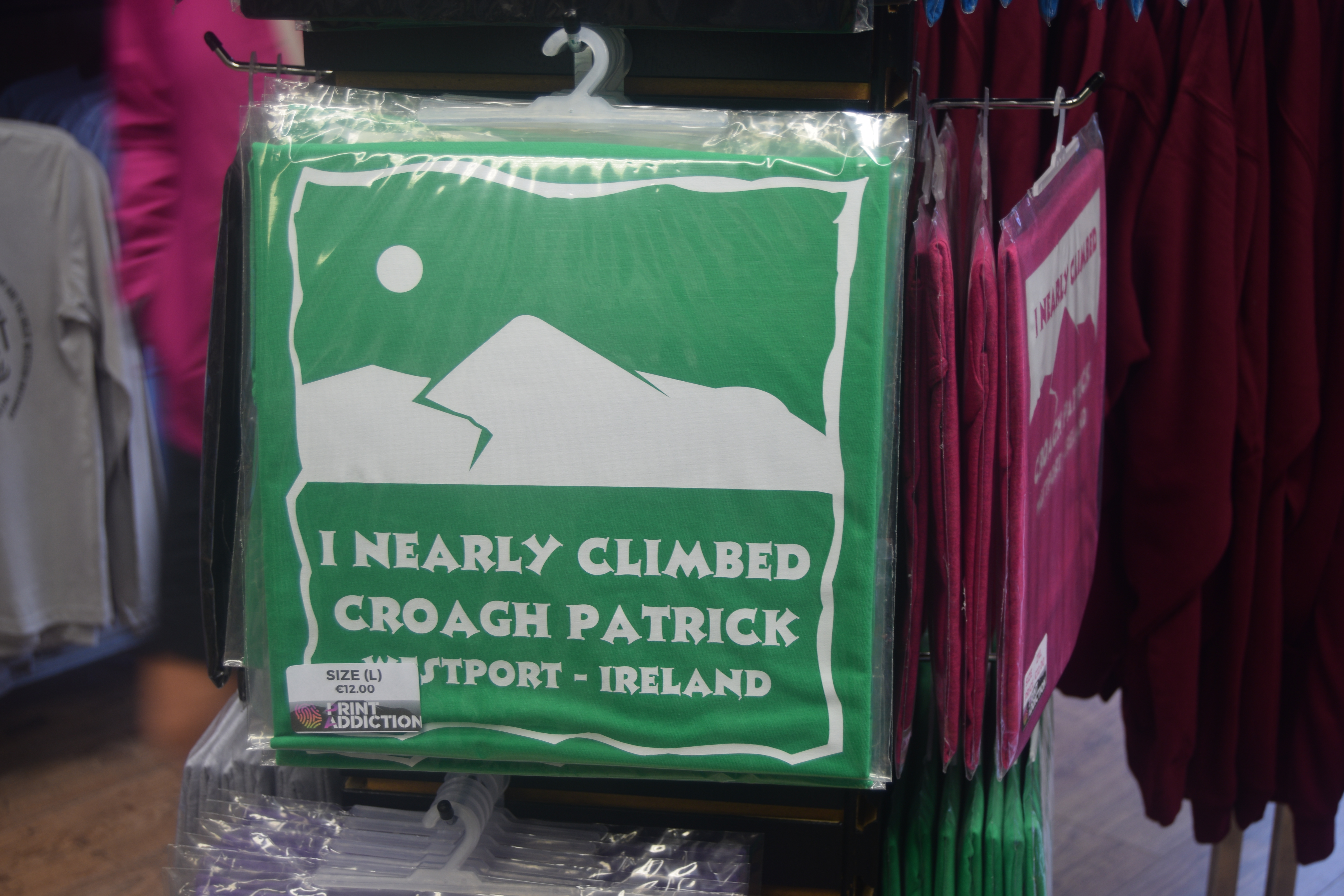 (And you can still buy the t-shirt!)