There are direct options from some major European cities to Muscat or, alternatively,  connections from the Middle East hubs (which might be the cheaper option).

Make sure you have 6 months left on your passport.

E-visas are being rolled out but there have been glitches with the system so there is still a desk at the airport where you can purchase the visa upon arrival.   The 10 day option costs OMR 5 (about €11.50) but make sure you buy it on the official site.   Also – it has to be used within a month of purchase so don’t get it too soon.

International Drivers Licence or not

We weren’t able to get a definitive answer on this one.    Best advice was that anyone staying in the country for less that 30 days didn’t need one but that you’re better off with it in the event of a traffic accident and dealing with local police.   We decided to err on the side of caution and applied for it anyway.  As it happened,  it didn’t arrive on time so we went to Oman without one after all.   It was never mentioned at the car rental desk and we were incident free throughout the trip so we’re back home and none the wiser!

When you get to Oman:

Currency is the Omani Rial

ATM’s at the airport have been known to empty (all of them!) – especially at weekends – so you should bring some hard currency just in case.

There are ATM’s in the major towns but again,  we found that they may be empty at weekends or just dispensing OMR 50 which is about €114 – try paying for a coffee with that!

Arabic is the official language but English is widely spoken.

Type G plug  – The 3 pin rectangular blade plug (So if you’re Irish or British you don’t need an adaptor).

Omani dress is generally conservative with many men wearing a long dishdasha and women wearing the black abaya.   They are tolerant of Western dress but as a sign of respect,  there are a few steps you can take so as not to offend:

Women – the general rule is to cover shoulders,  cleavage,  stomach and knees.    Clothing should be loose  – it can be HOT!   You will need a few long sleeved tops.  Always carry a scarf – it can cover your head at the mosque,  cover your shoulders if your not sure about that t-shirt and can be used as a wrap in air conditioned malls.   At Wadi Bani Khalid you will need a t-shirt over your togs.   Don’t wear a bikini on a public beach.  Your usual swimwear will be fine at the resort hotels but you will need a long beach wrap for going from pool to bedroom, etc.

Children are fine in shorts and t shirts.

General – Bring a cardigan or jumper for nighttime in the desert or sunrise at the turtle reserve.   Jelly shoes are great for the wadis.   If you are going to swim at the wadis then you will need a wet bag for your phone, keys etc. as well as a towel. 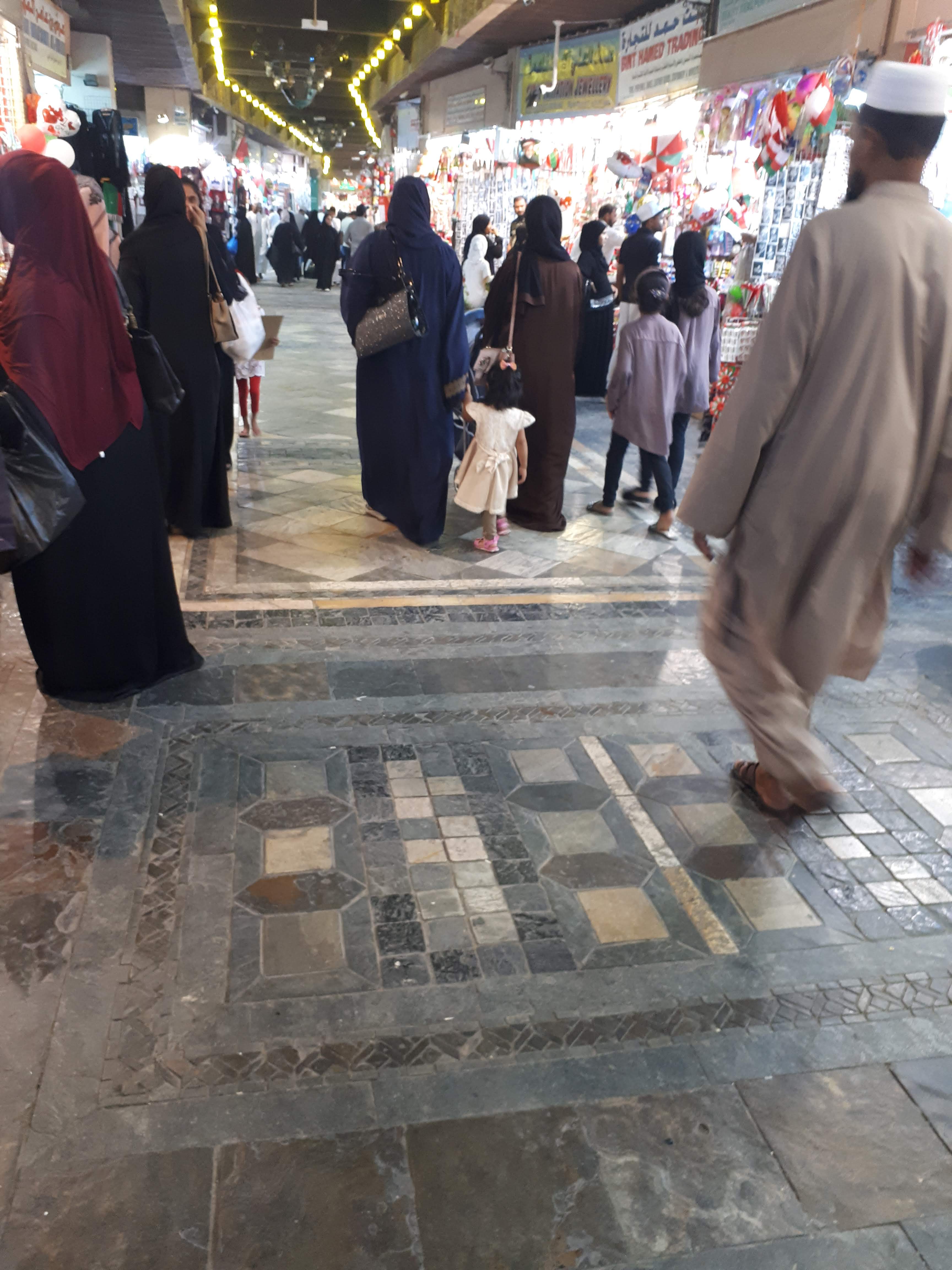 Its very hot in the summer months especially from June to August with temperatures soaring towards 50°.   This is the least popular time for travel in Oman.

Flash Floods – I’m mentioning this because it rained when we were on Jebel Akhdar and a hotel guest missed his flight in Muscat because of flooding.   He left with a driver but they had to return to the hotel because the only road to the base of the plateau was impassible.

The public transport system isn’t great.   There is no train network.  There is a bus service between the main towns but not to the wadis and mountains.  Taxis are expensive.  Its worth considering car hire.  Fuel is very cheap (and is usually pumped by attendants).  In Muscat,  there was free parking at the hotels and we used the car for short trips to the souq,  the mall,  and restaurants. 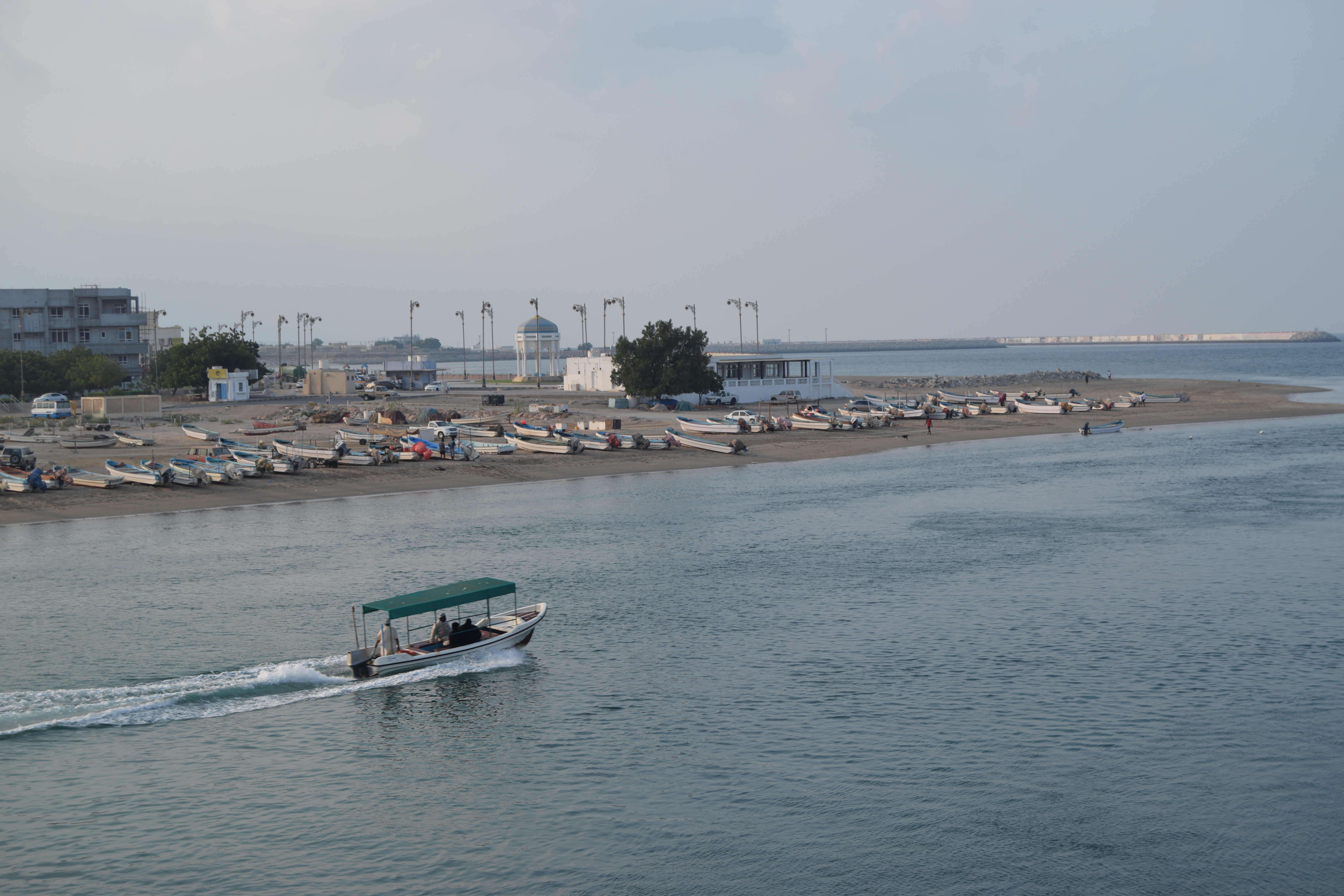 (A water taxi in Sur)

There is a considerable difference between the cost of a 4WD and a non 4WD.   In our case it was almost €500 for 10 days.

With a 2WD,  we had access to most places on our itinerary.   We had to make arrangements to access Jebel Akhdar and our desert camp.

At Jebel Akhdar,  our hotel transfer cost OMR 60 (€137) return from the police checkpoint.

If we’d included Jebel Shams in the itinerary,  we would have needed to organize transport there also.

BUT… on the downside,  it restricted us in that we were tied to pick up times etc. and we couldn’t spontaneously go off road.

Most signposts are in both Arabic and English.

There is a lot of road construction going on so there may be no signage in places.

Don’t depend on just road numbers when making note of directions – we only came across one numbered road on our travels and that was the main Muscat – Sur Highway.

Spelling varies greatly  – e.g.  the road sign spelling may not be the same as your map so have a rough idea where you’re headed before setting off.

Drivers will come up very close behind you but are generally polite. 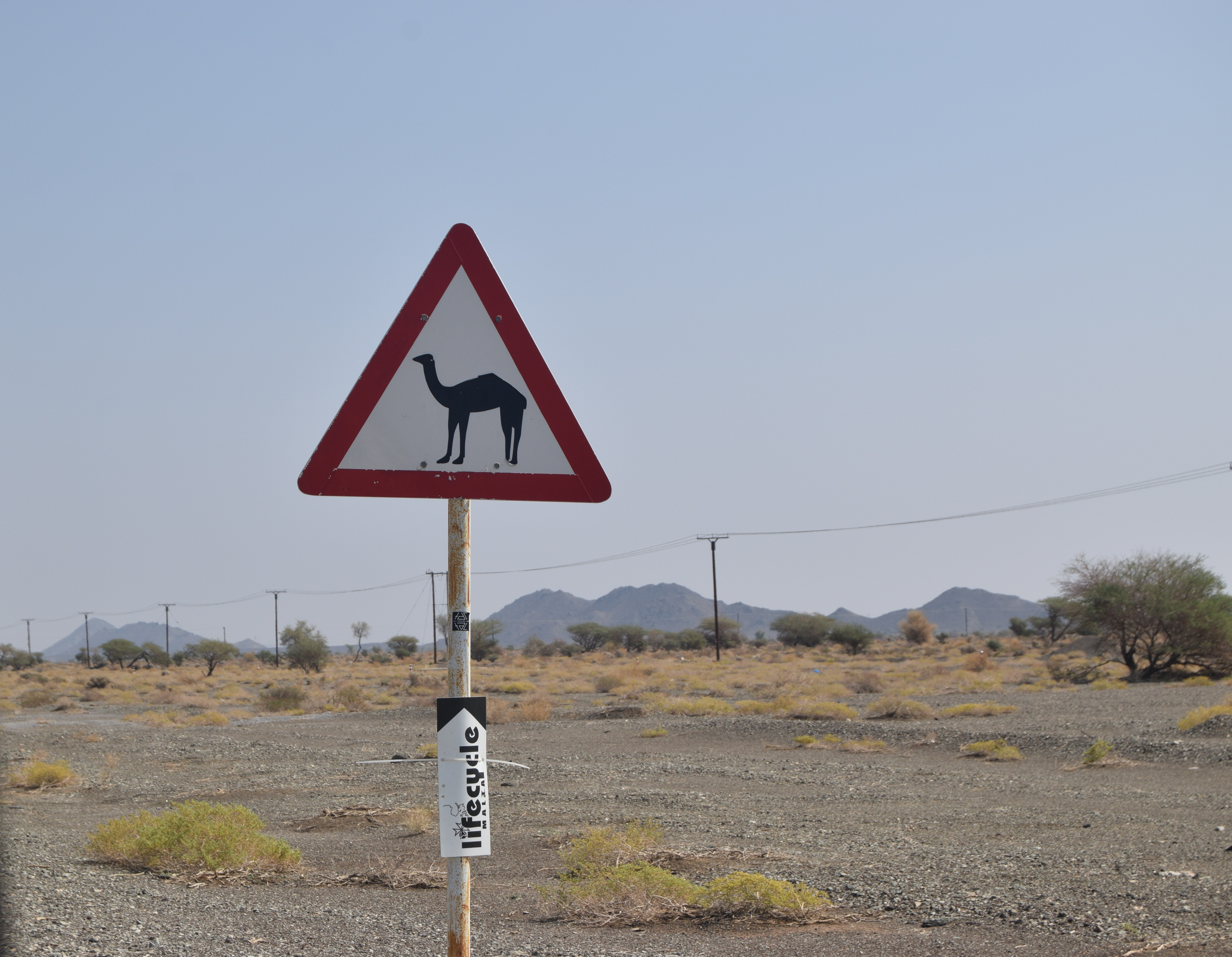 Traditional Omani restaurants are not common and can be expensive.

Alcohol is available in the resort hotels.   Wine is very expensive – beer is a bit cheaper.  The juices and shakes are gorgeous so with alcohol costing so much it might be a good time to consider a detox programme while you’re there!

Most hotel rooms had a kettle and cups etc. as well as a fridge.  So you can cut down on expenses by stocking up on breakfast and lunch items in the supermarket.

If you’re a coca cola drinker then beware! – this is Pepsi country! 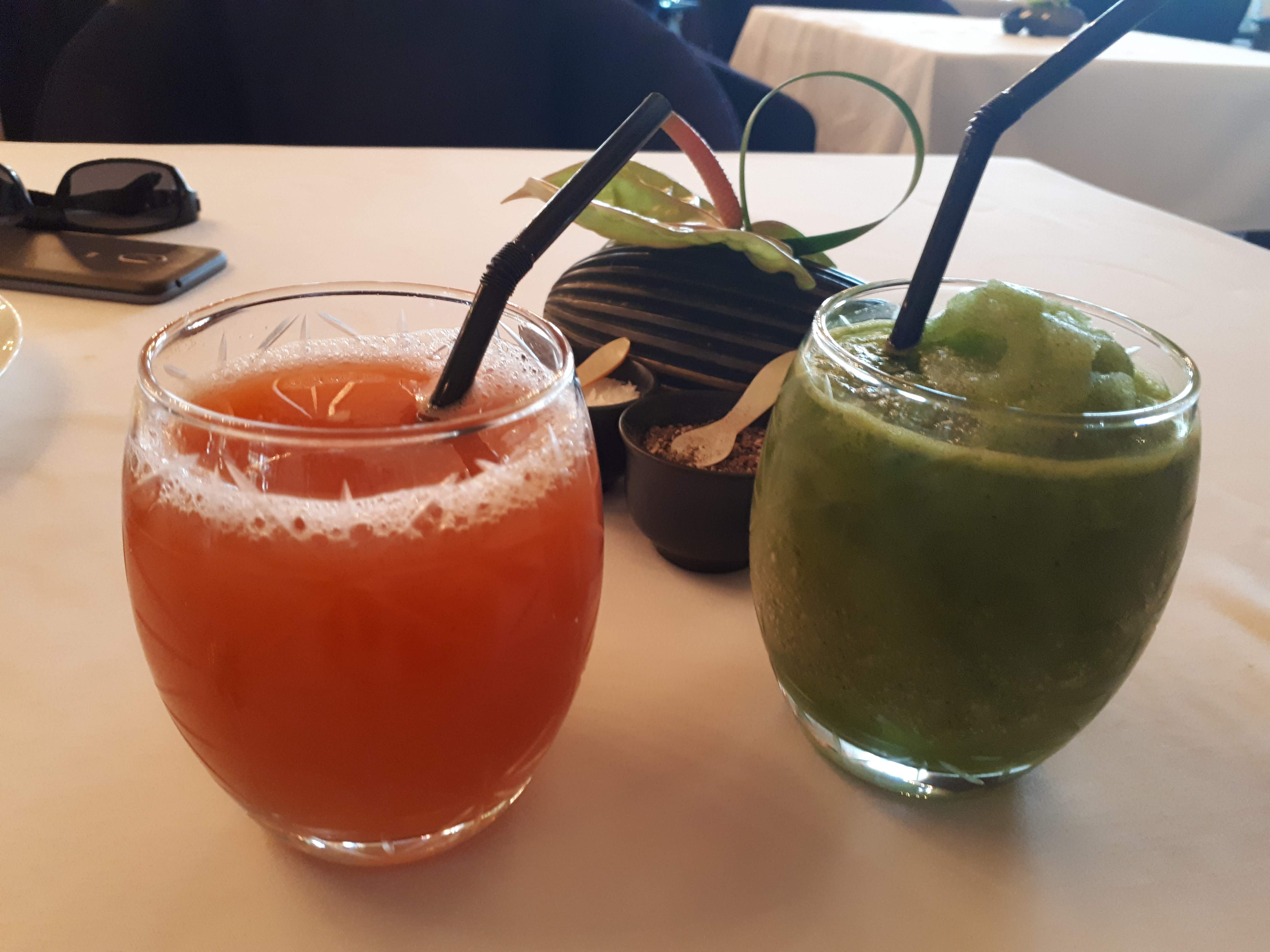 Oman is considered one of the safest countries in the region.

We had no worries wandering about towns and villages whether it was daytime or after dark.

We were assured that there was no security risk to the car when we abandoned it with our luggage on the side of the road overnight on the two occasions we transferred to 4WD transport.

There is no non-Muslim access to the Grand Mosque on Fridays.

Popular tourist spots – like the wadis and desert camps,  can be very busy at weekends.

Some museums,  restaurants and shops may close on Fridays and Saturdays.

One thought on “Thinking of visiting Oman? – Some tips before you go.”