Do you like organised city tours? Up until a few years ago I was very much a DIY gal. I’d much prefer wandering with my Lonely Planet or Rough Guide and doing my own thing. Now its one of the first things I check out when planning a city break. While I’ve paid for food tours, bike tours, etc, I usually opt for the ‘free’ tour when walking. I know there are legal controversies and that tour companies are not happy with the explosion of such tours in recent years. But I usually pick an established company with several guides. I’ve yet to be disappointed – I find the guides energetic, flexible and knowledgeable and well worth a generous tip at the end.

I’ve had one such positive experience in Hamburg. I booked the 11.00am walking tour with SANDEMANs NEW Hamburg Tour. Evan was our guide and for 2.5 hours on a miserable morning, he kept the attention and interest of 25 city visitors. I qualify Evan’s skills by recording that he started out with 25 and finished with 25! That’s never happened before – usually someone gets distracted by shops, gets generally fed up and loses interest or (the most annoying) slips away before the end to avoid paying anything ( I really hate that, don’t you!!). So all 25 of us trudged behind him for the duration ( I use the word in reference to the terrible weather of course rather than disinterest!!) and came away with a good overview of the city centre – both past and present.

What I particularly liked was the fact that Evan did not shy away from discussing Germany’s colonial past and the World Wars. This may have been made easier for him by the fact that there were no German tourists in our group and he himself is not German – did I mention he was Irish (you just can’t get away from us!!! )

These are some of the highlights from the walk ….

The centrepiece of the city, its hard to believe the town hall was only built in the 19th century. It still houses Hamburg’s parliament, senate and mayor’s office. Out back, there is a beautiful courtyard and water feature. 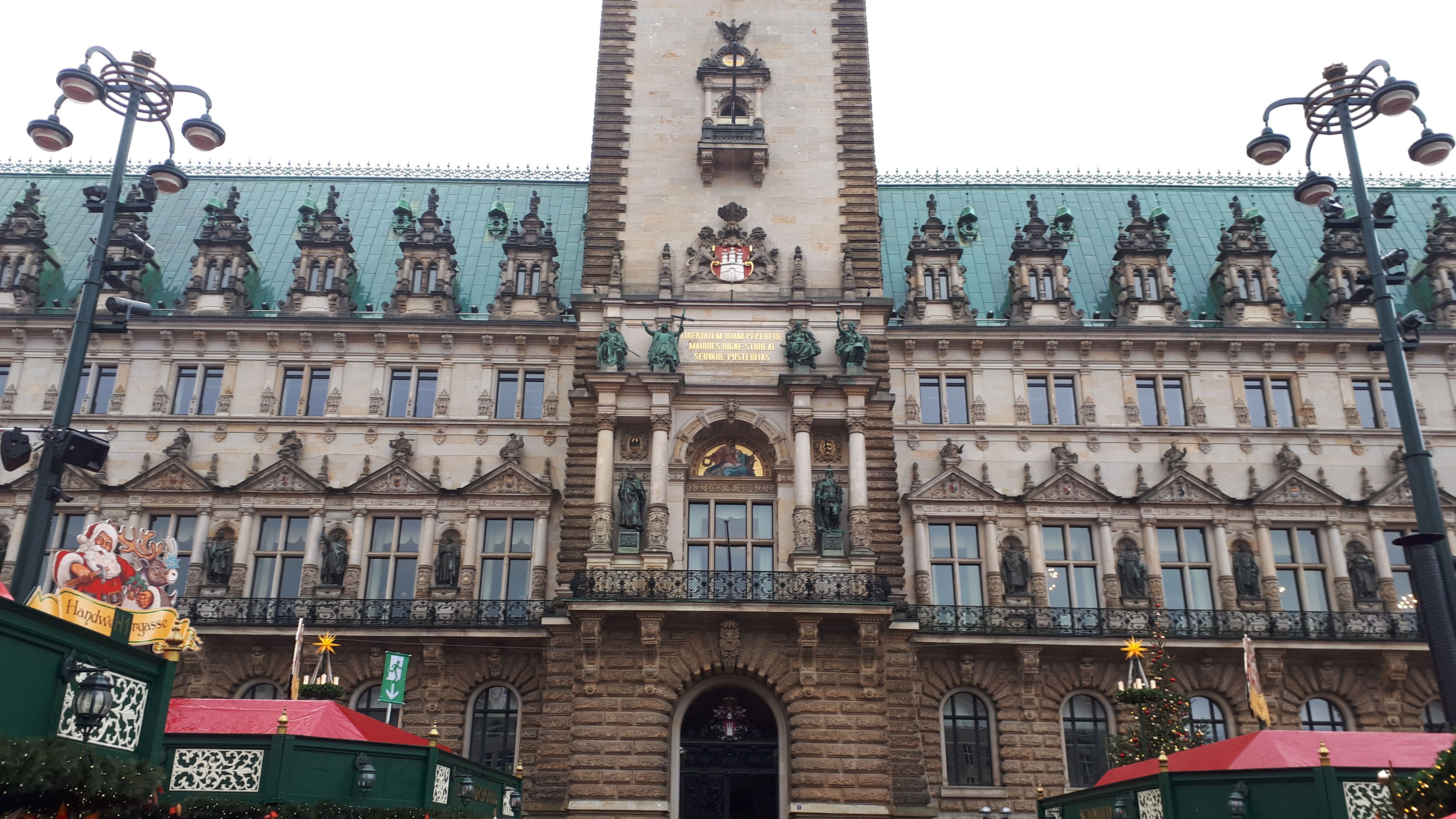 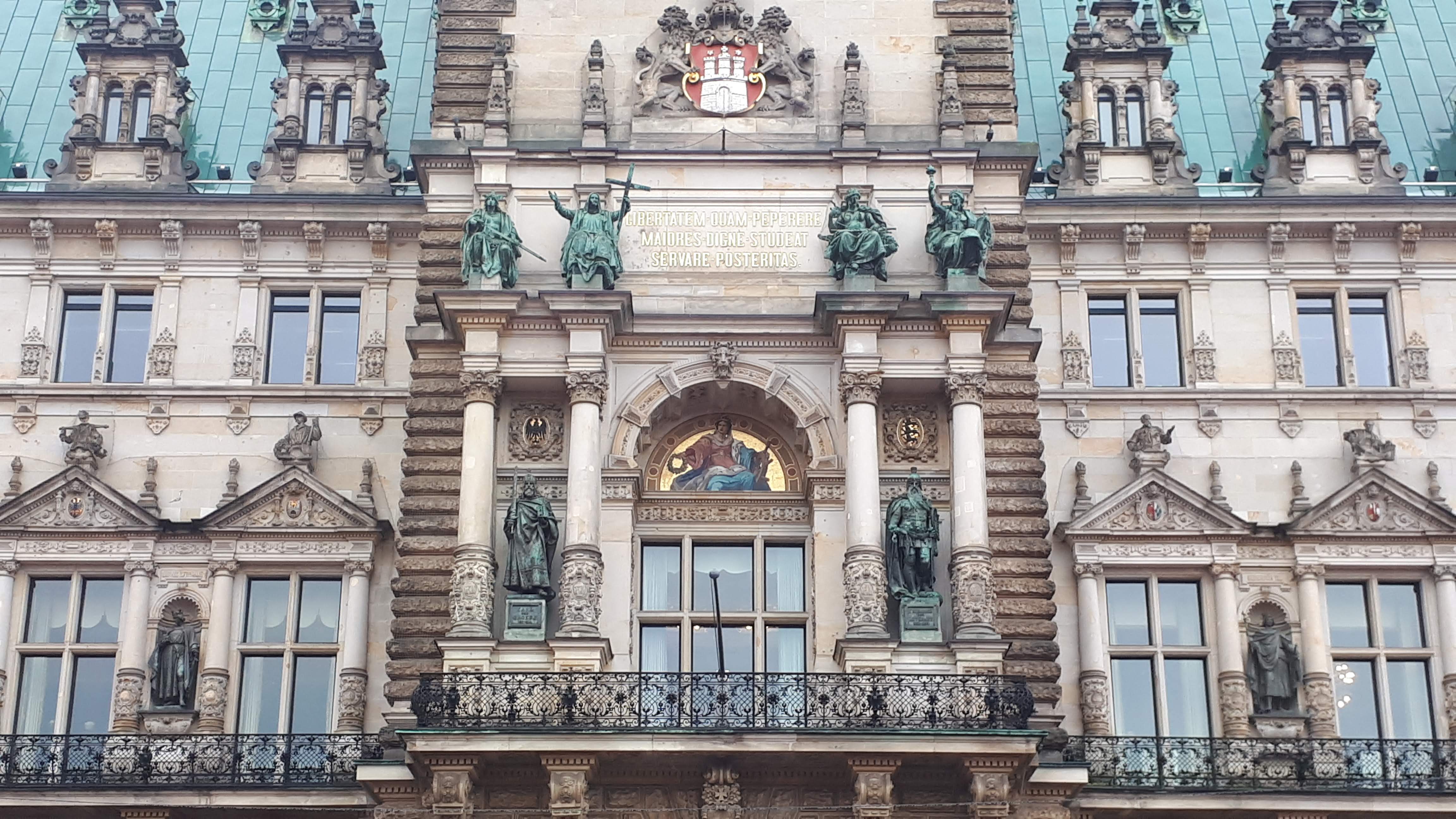 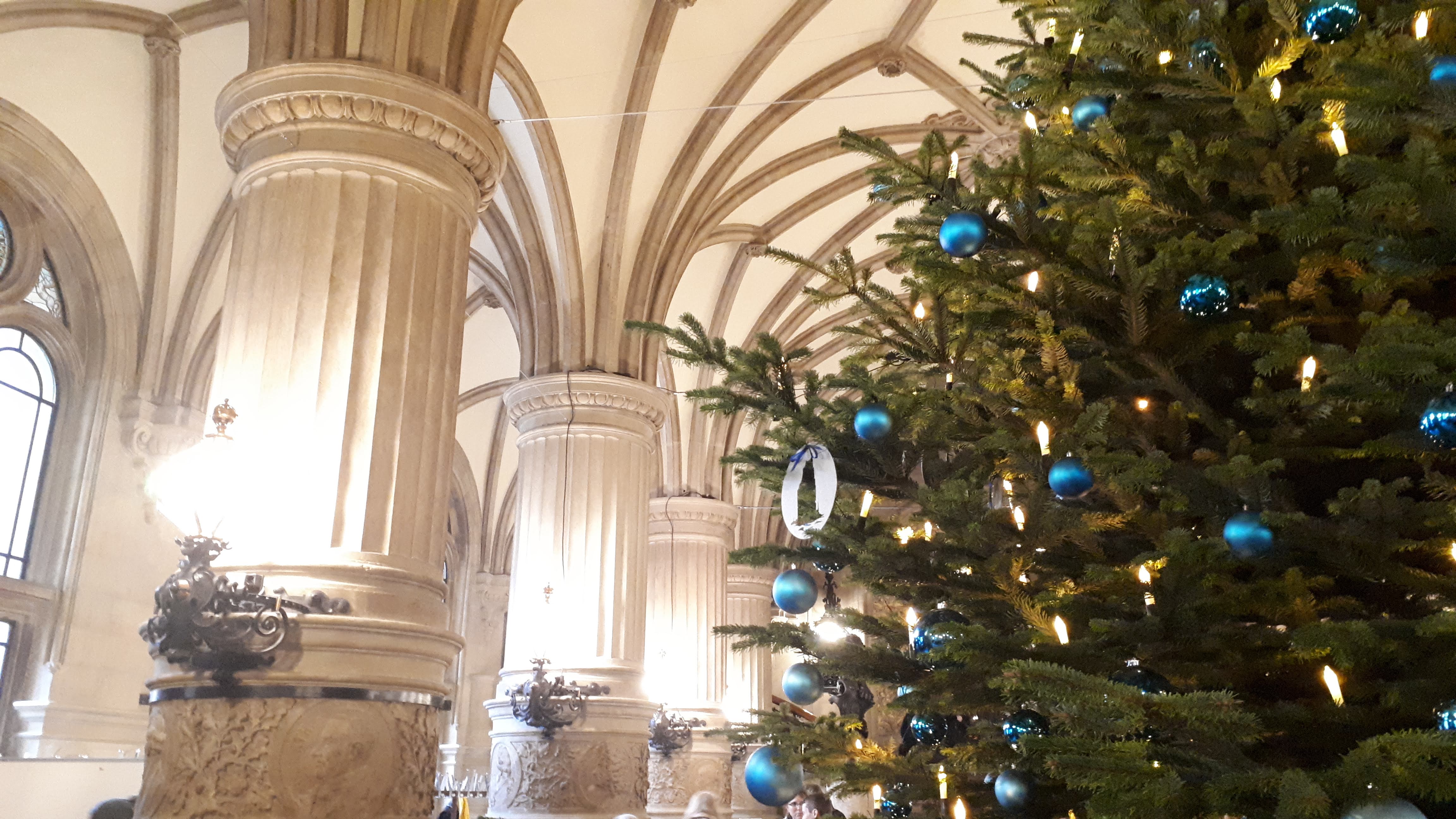 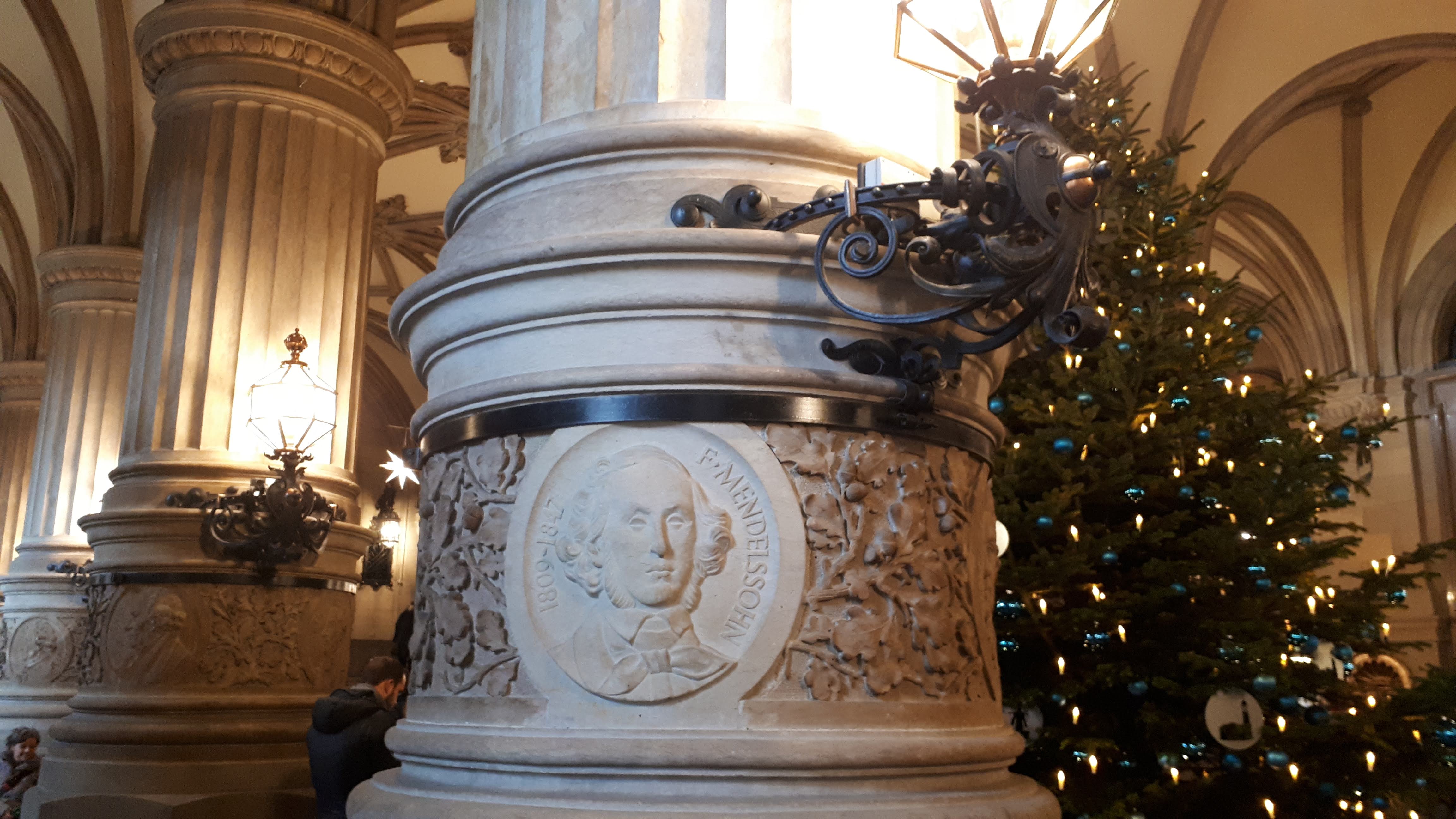 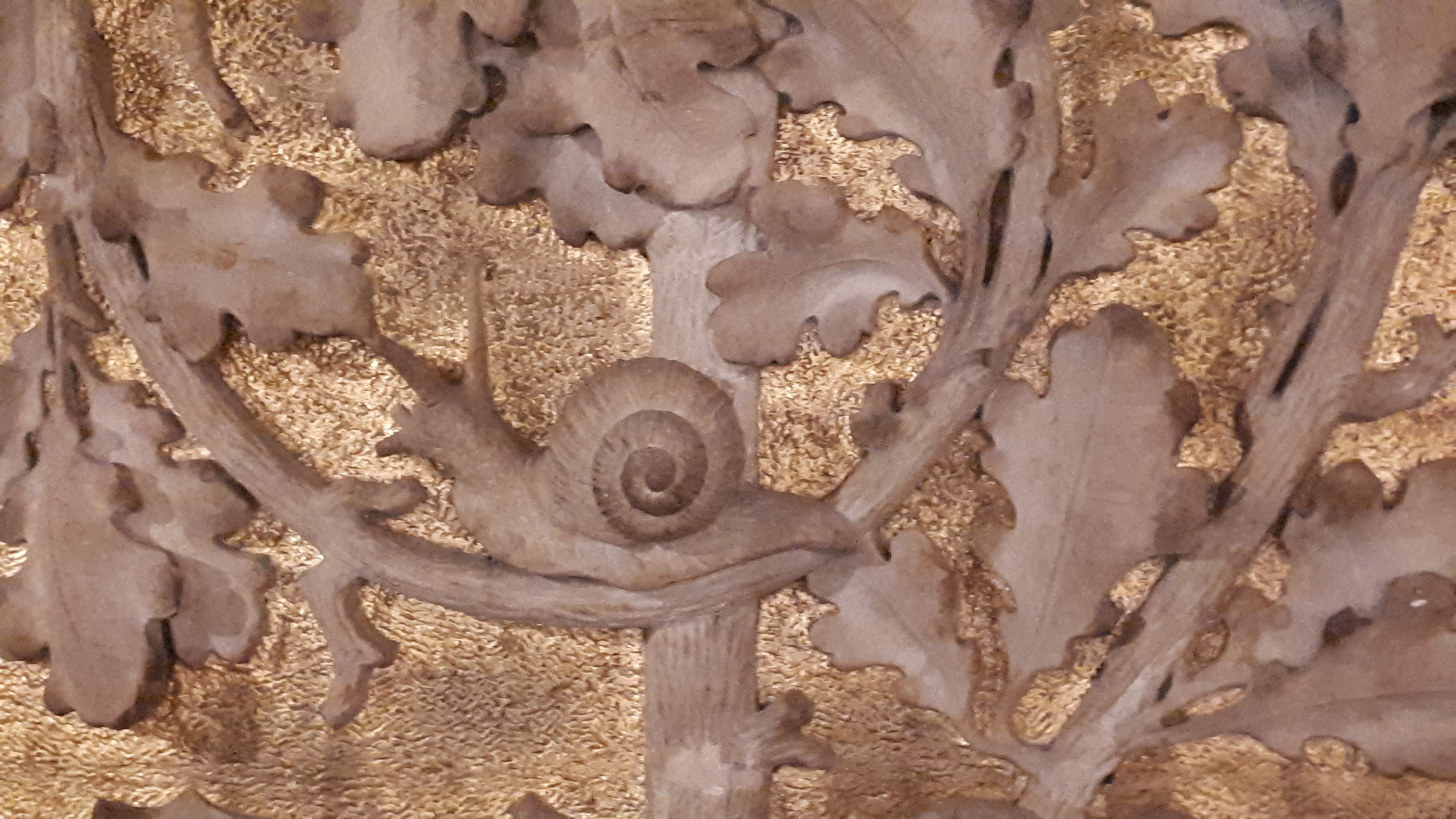 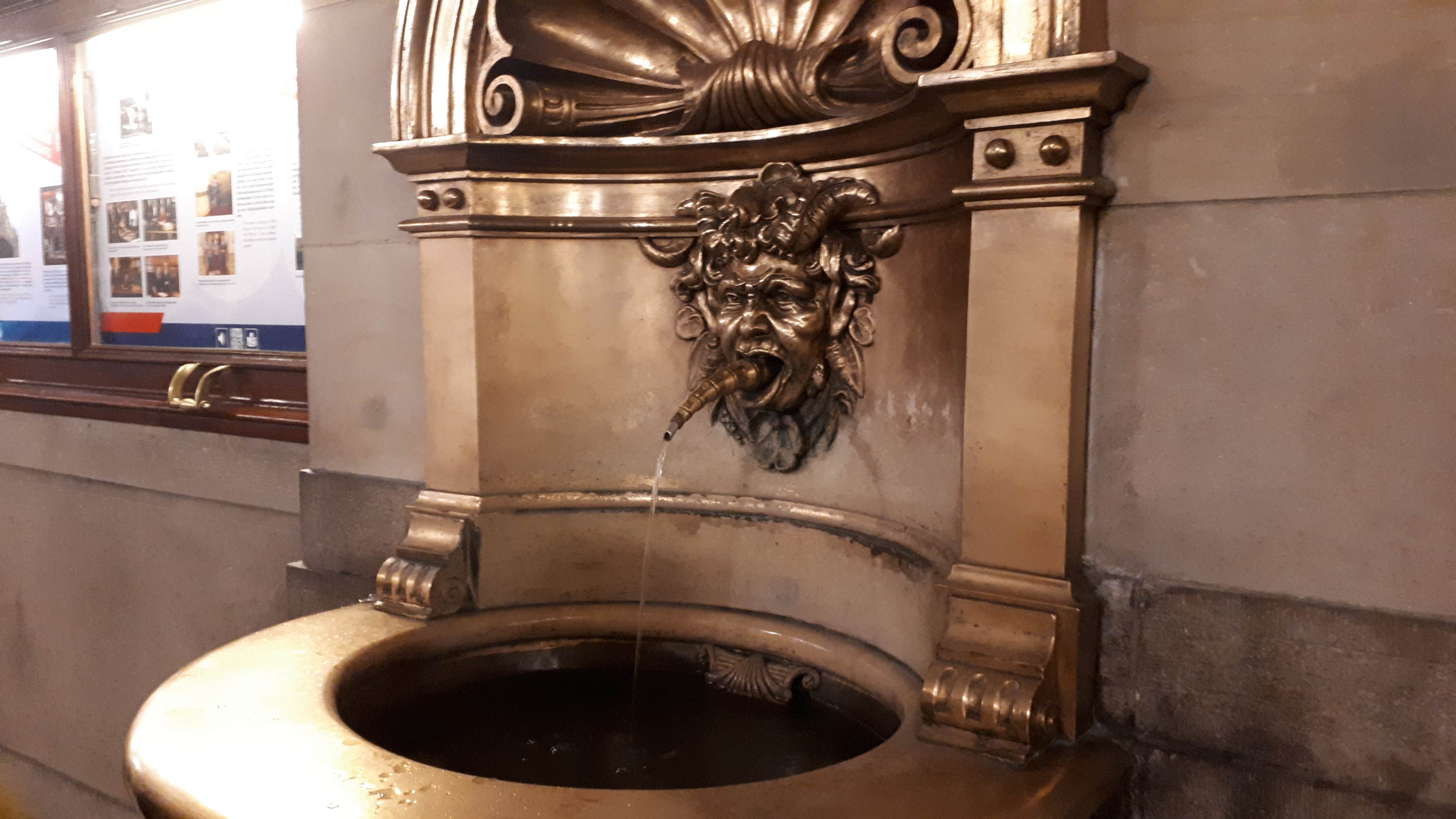 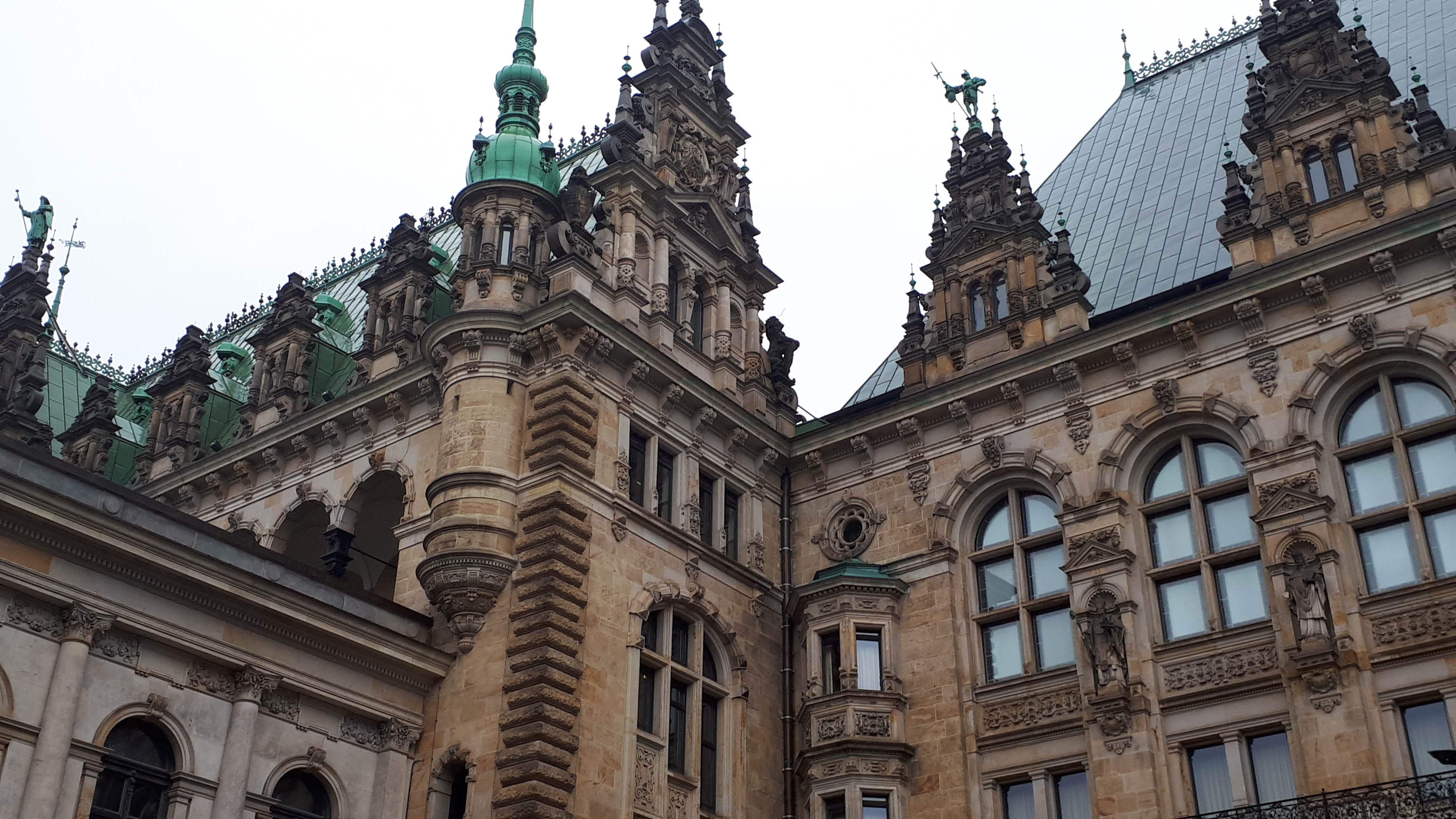 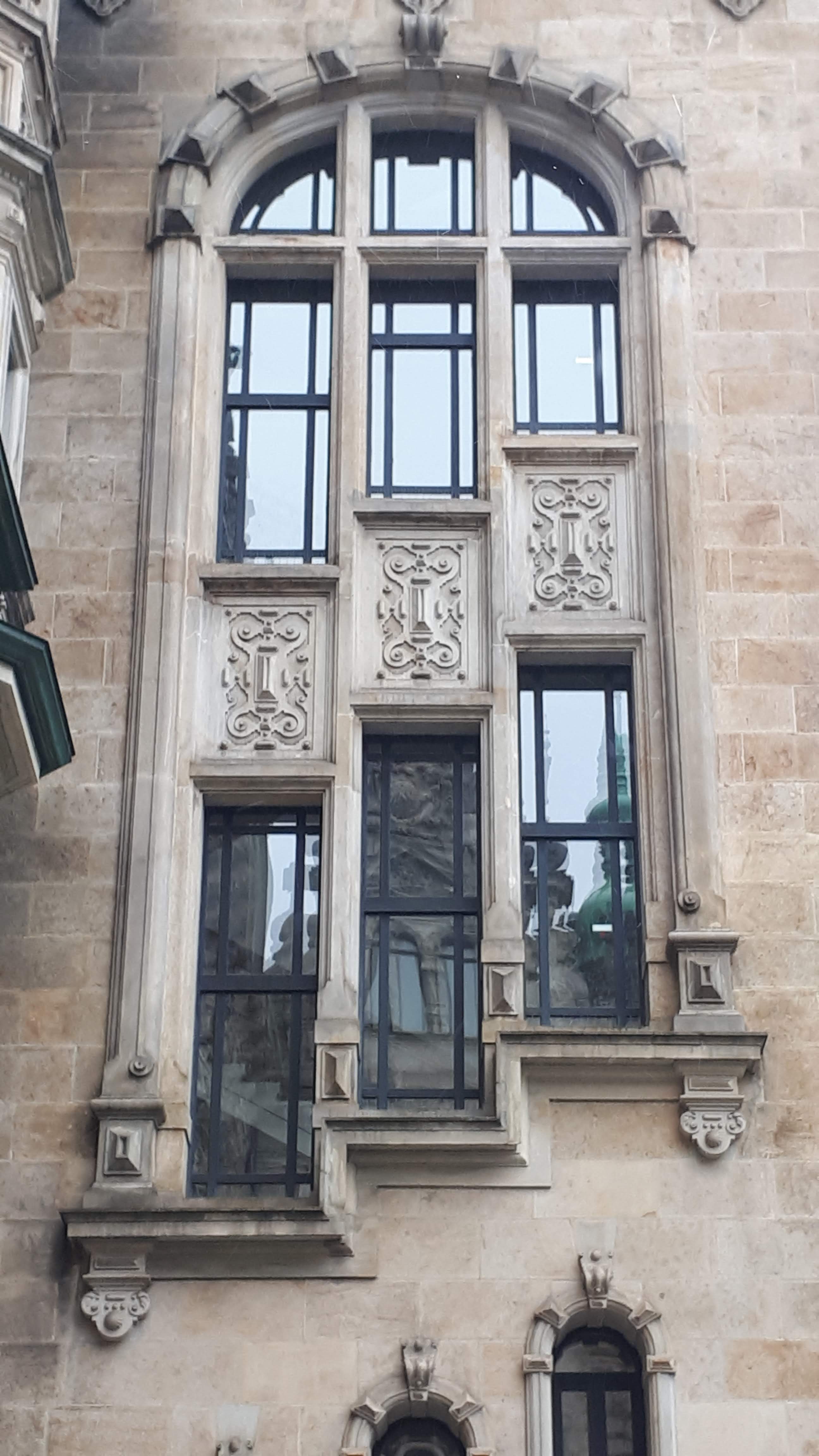 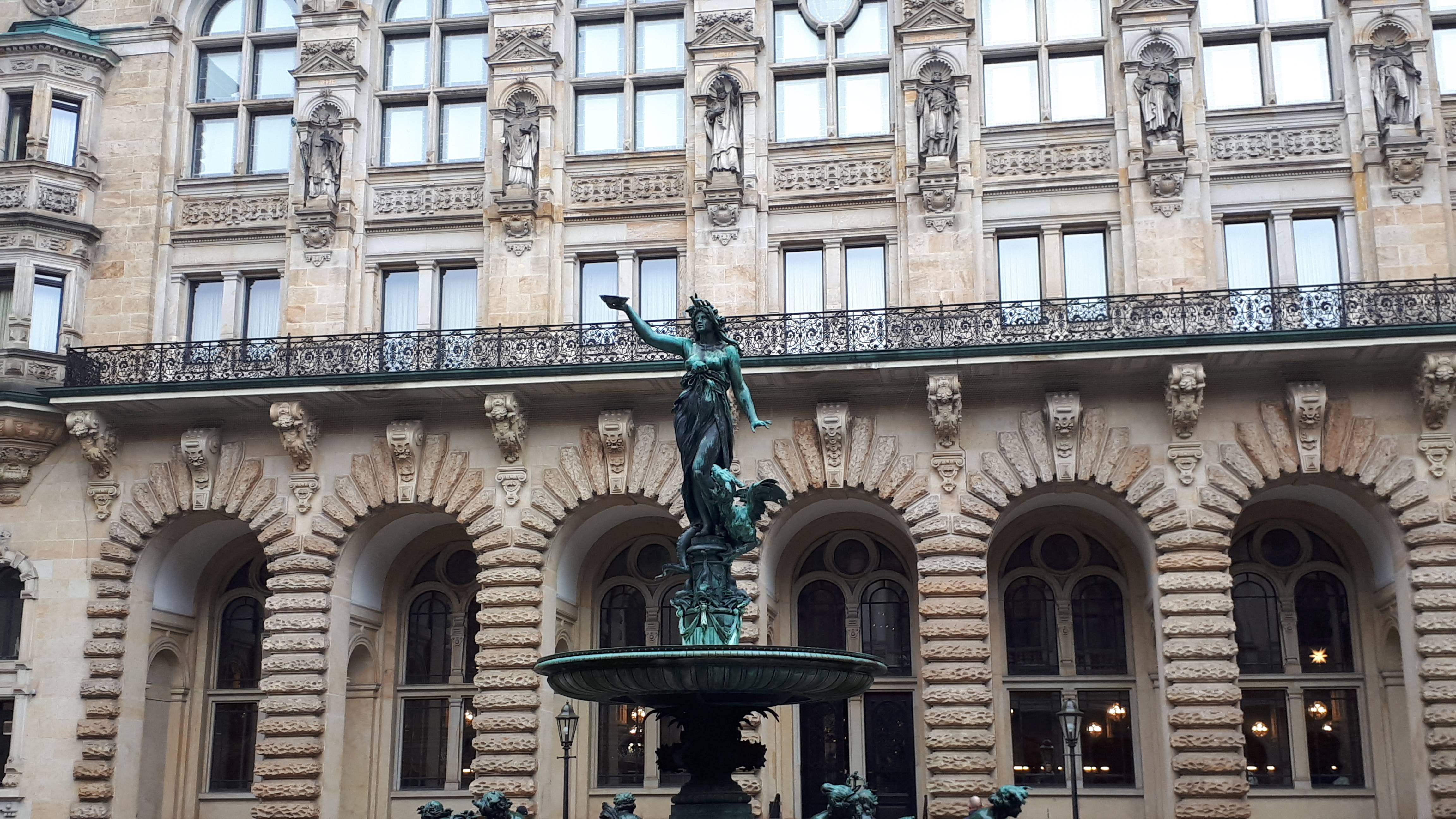 Here is the nucleus of old Hamburg. Those grey walls mark the boundaries of the original site. 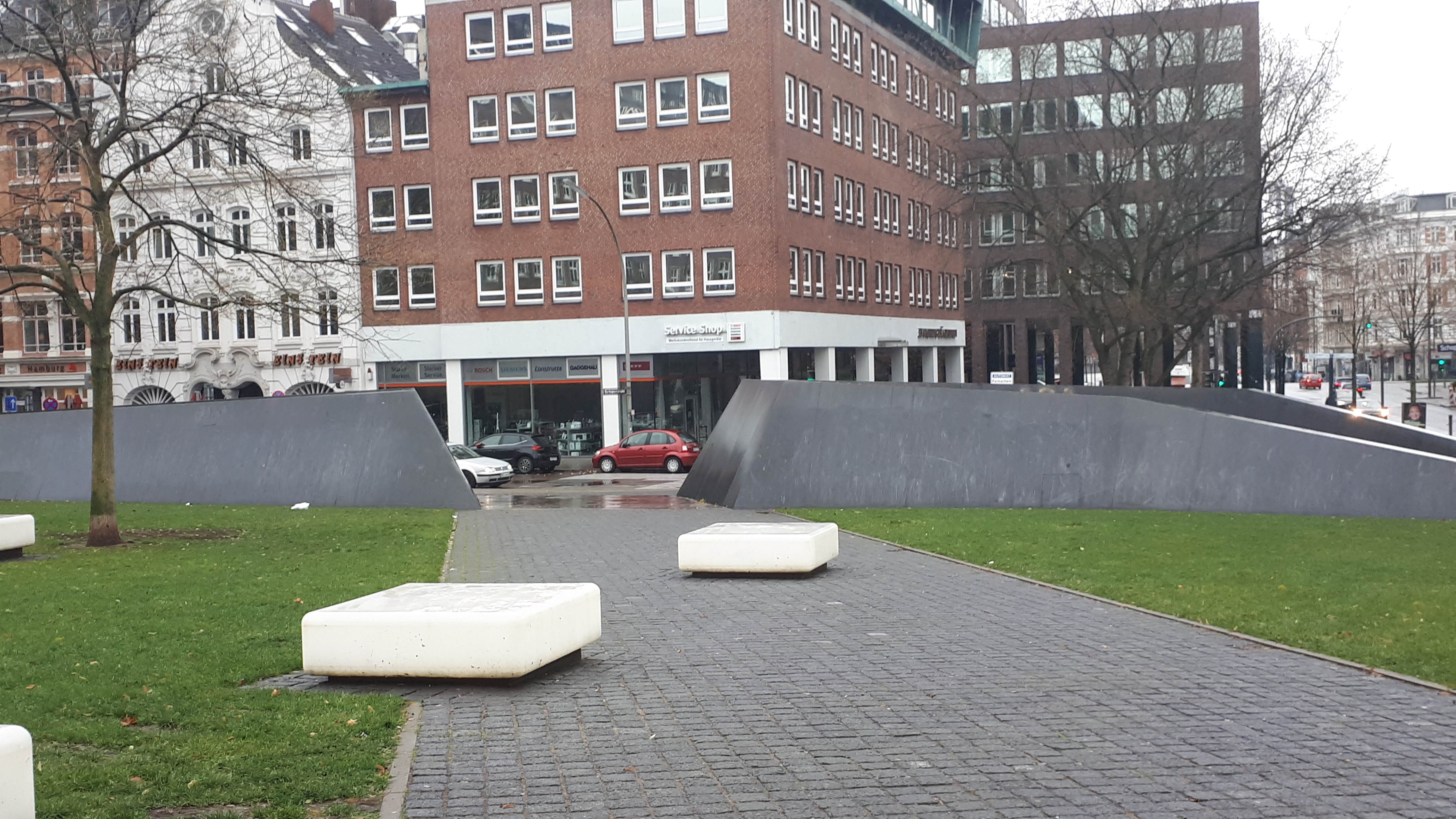 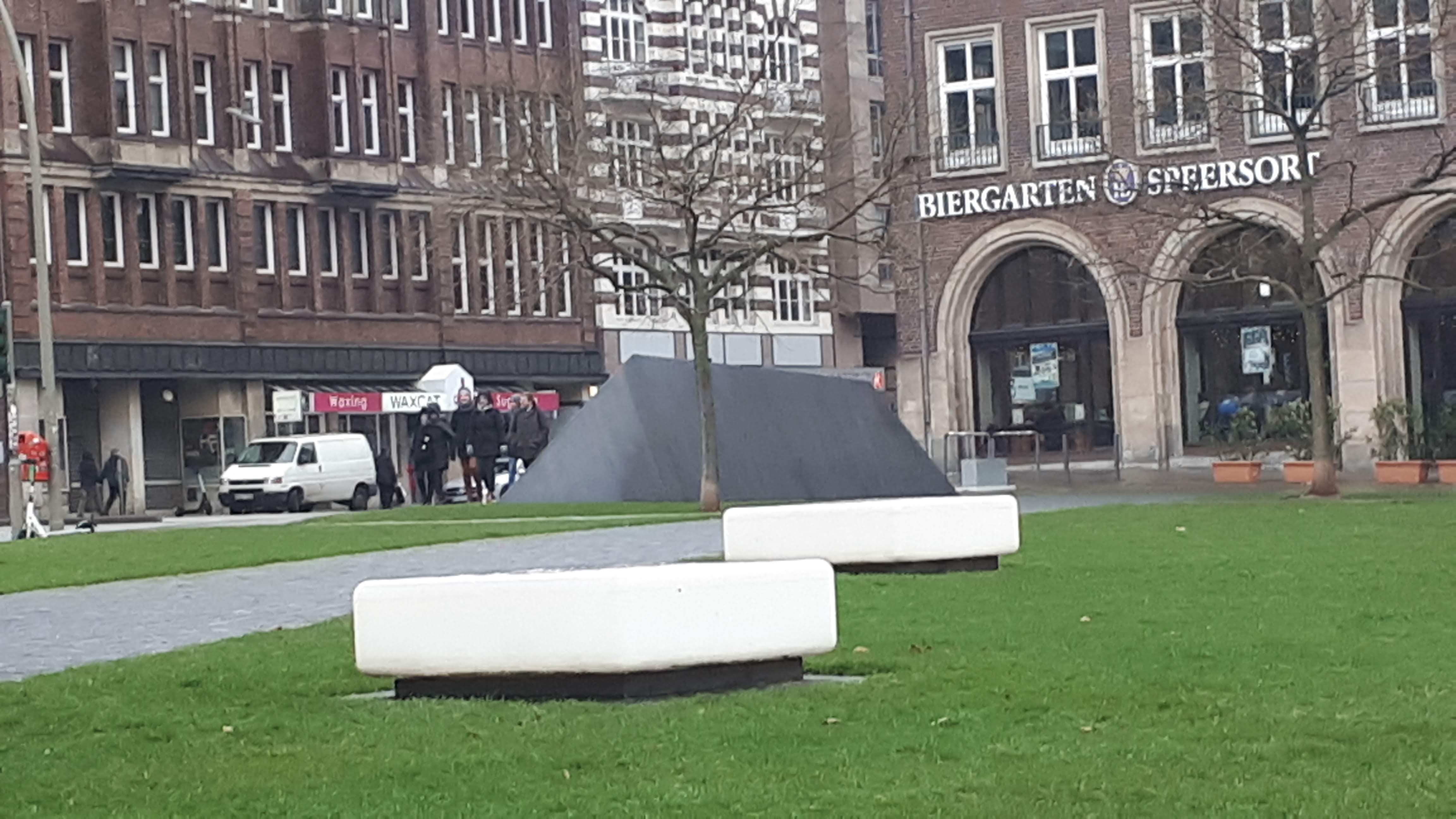 This church was built in the 12th century and destroyed in air raids in 1943. The site is kept as a memorial to the victims of war. 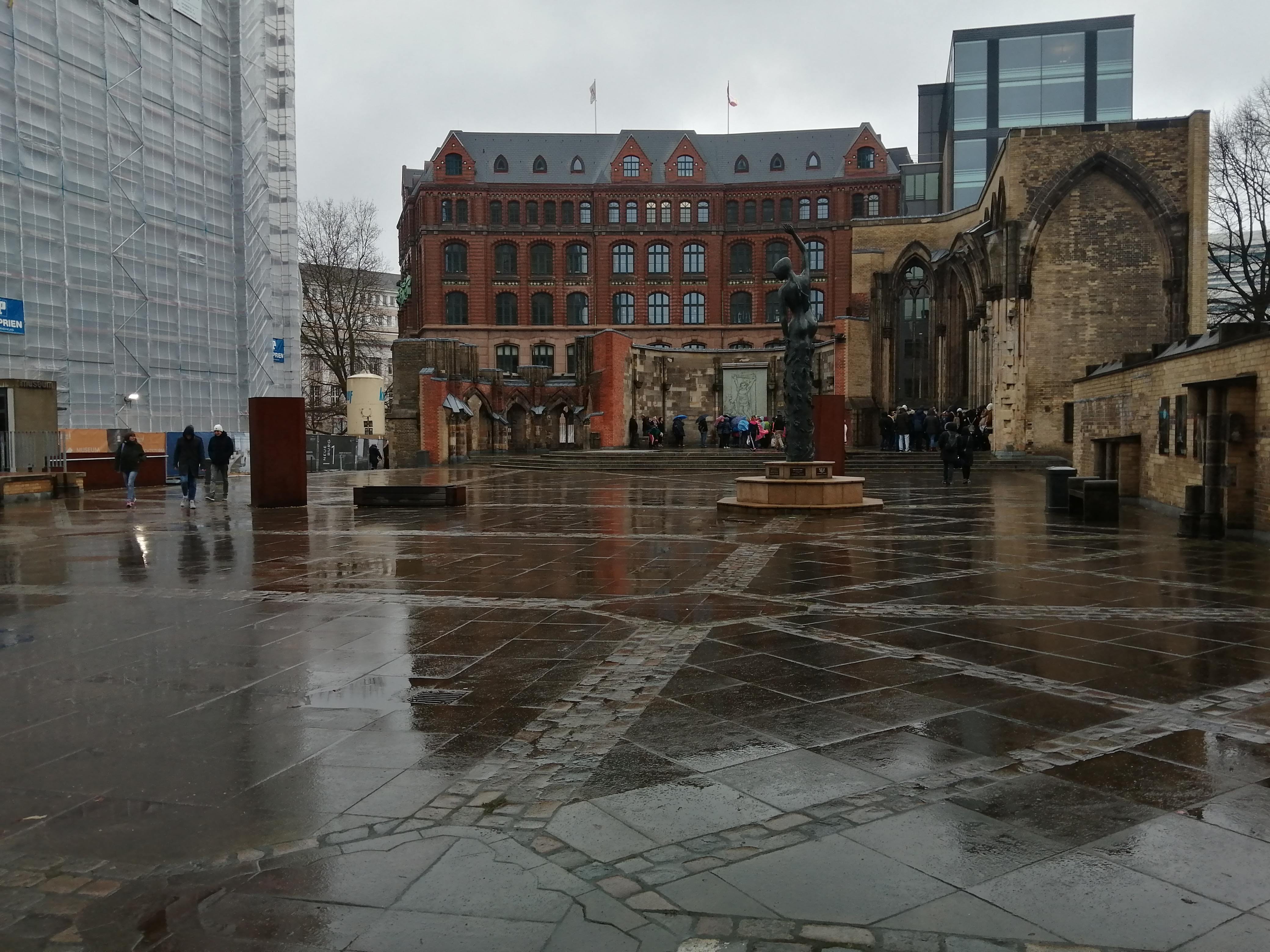 (This open space was the original nave of the church) 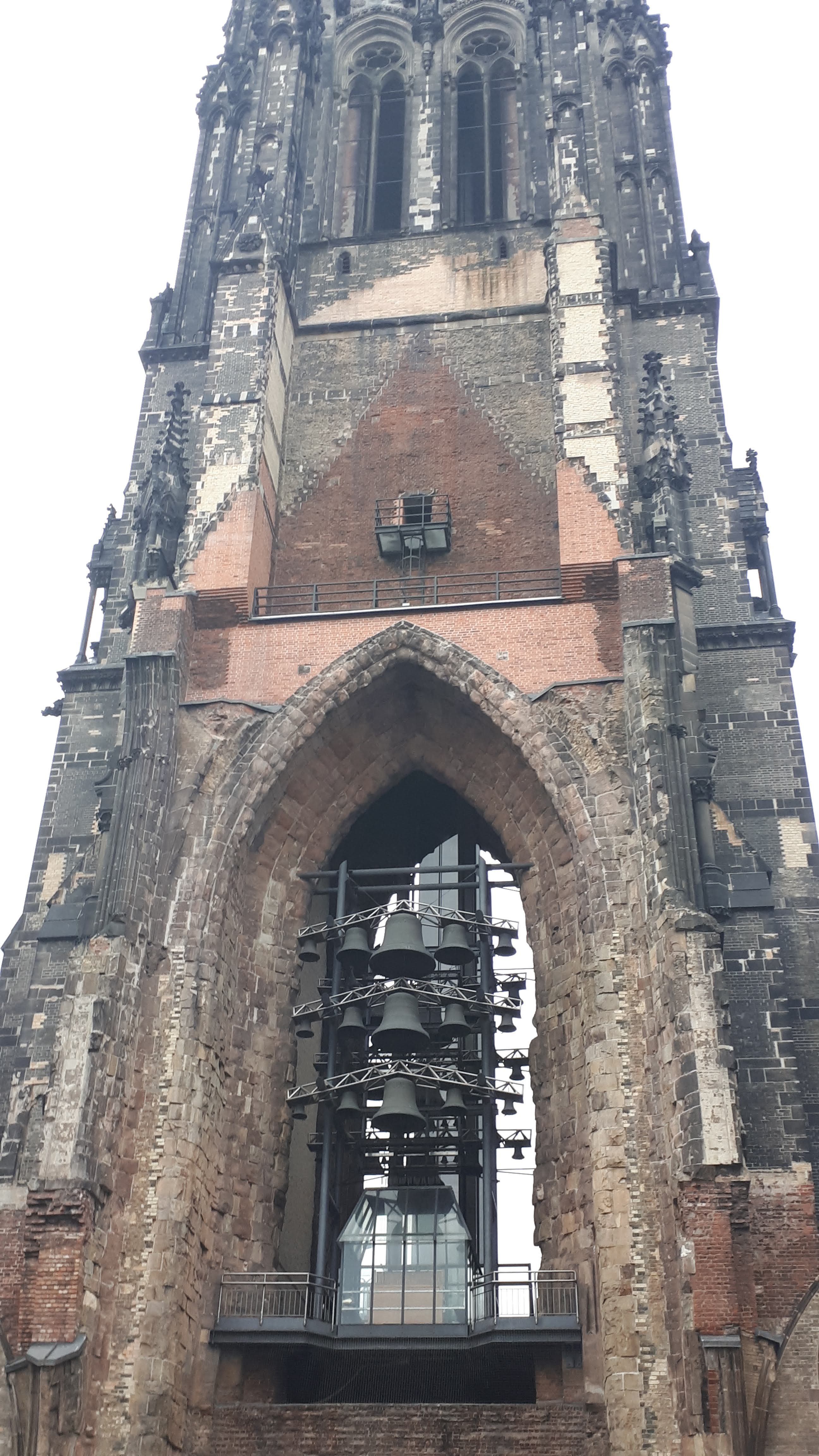 (The tower is all that remains) 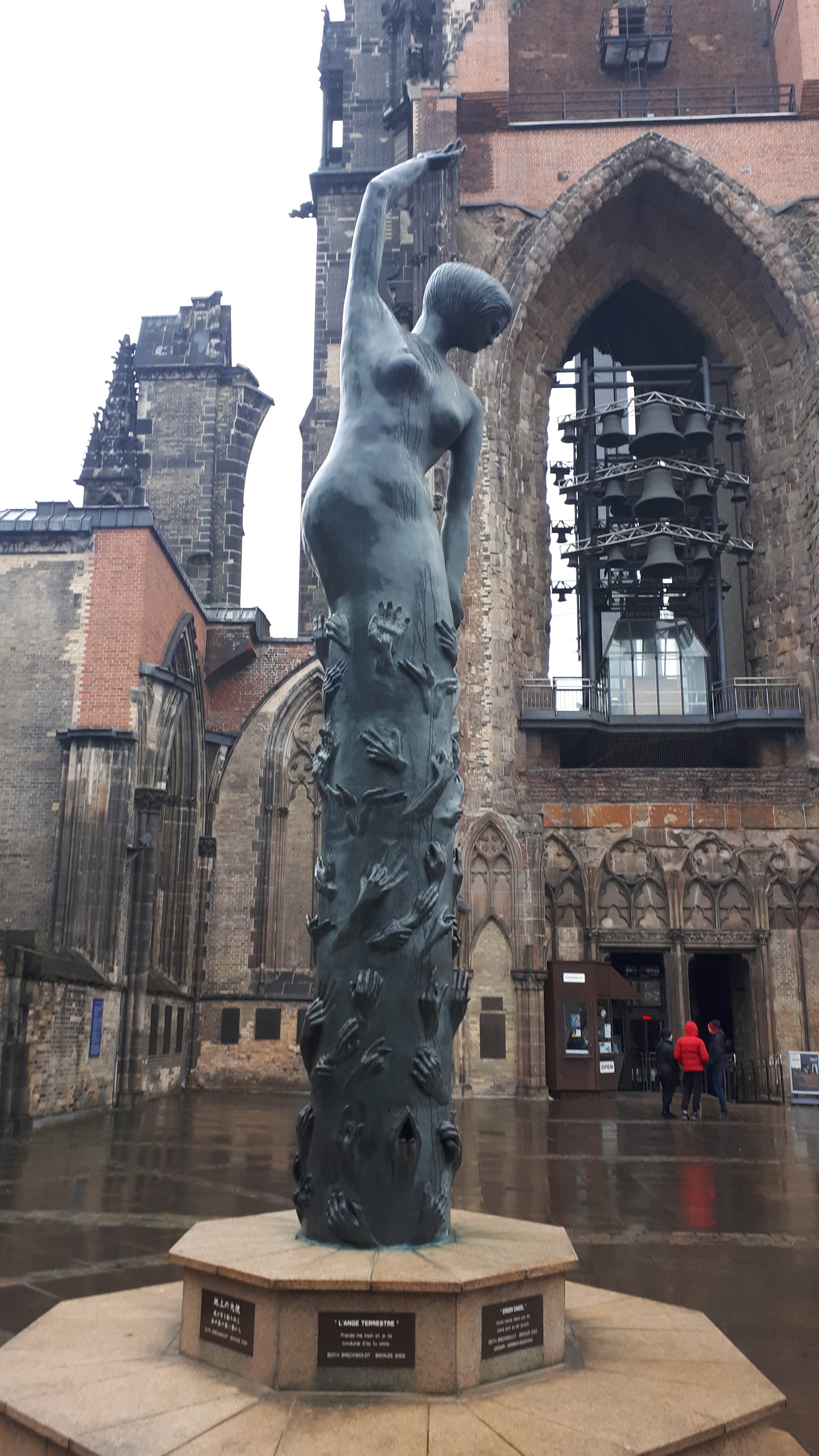 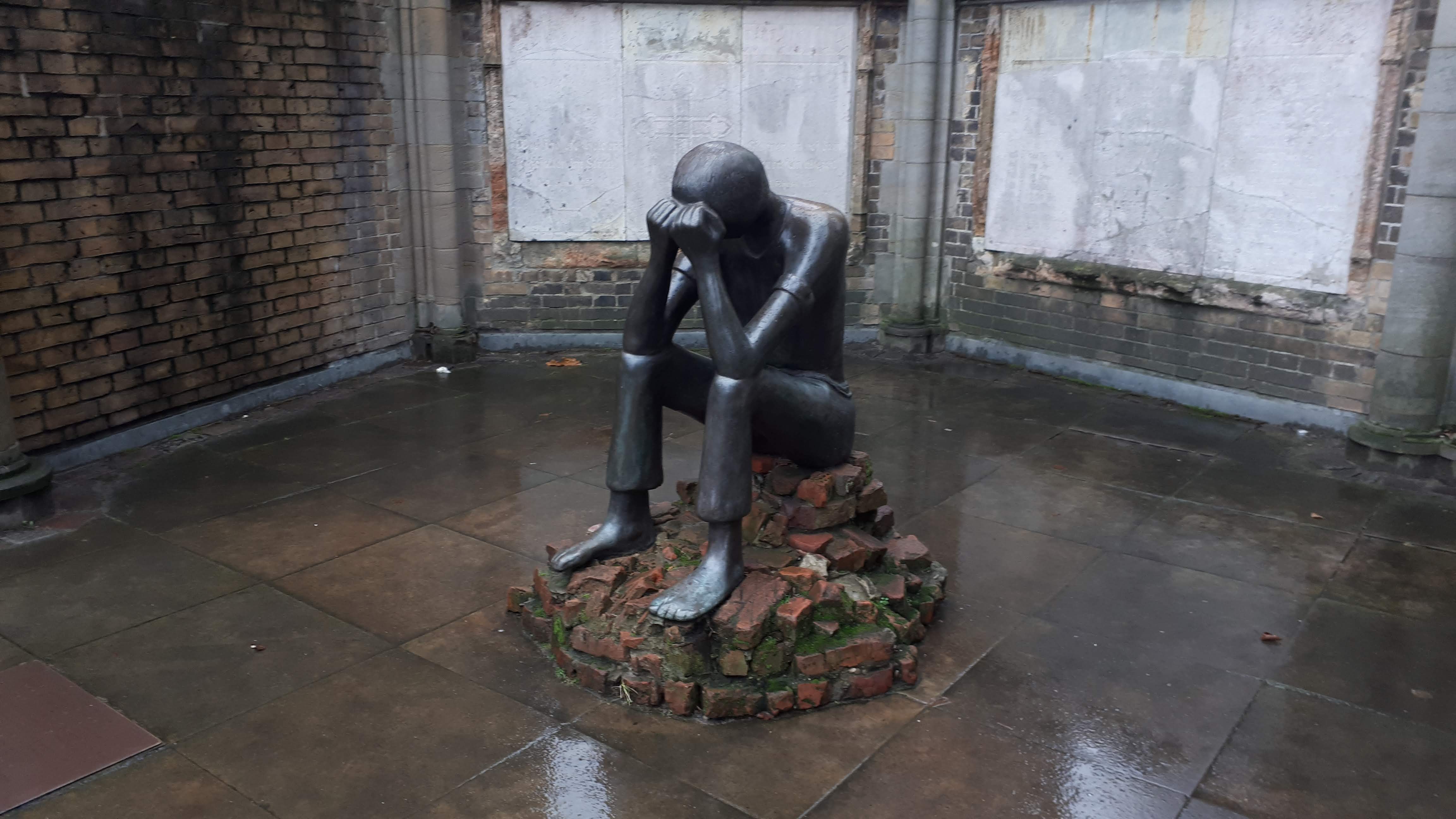 (This sculpture is dedicated to the former POW camp Sandbostel. The bricks under the boy came from the camp.)

Some of the old streets of town are sinking!! 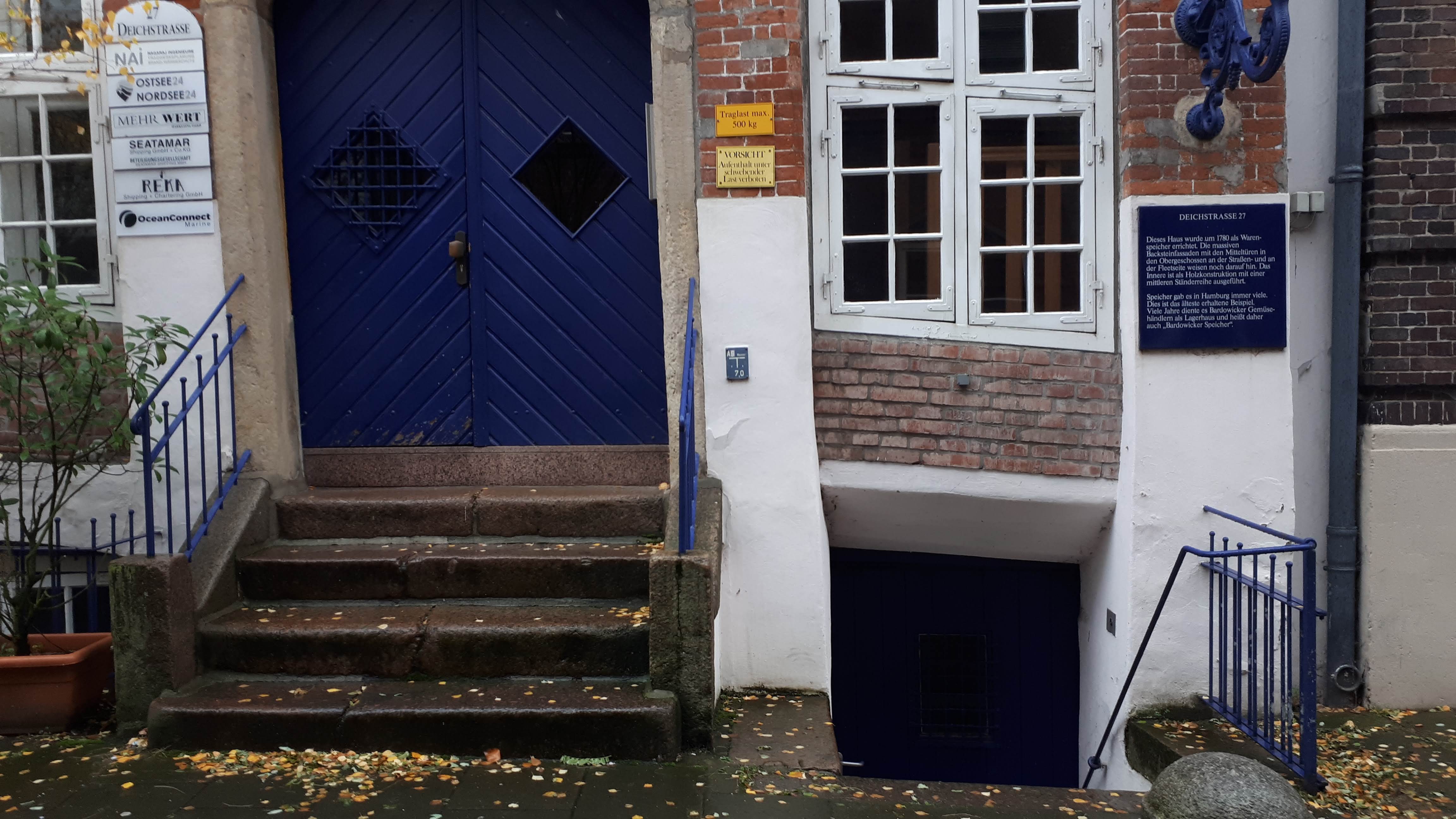 The warehouse district is the largest such complex in the world and now a UNESCO World Heritage Site. Many warehouses have been redeveloped as eateries and museums but cannot be residential. They are surrounded by multiple canals and bridges, making this one of the most photographed areas of the city. 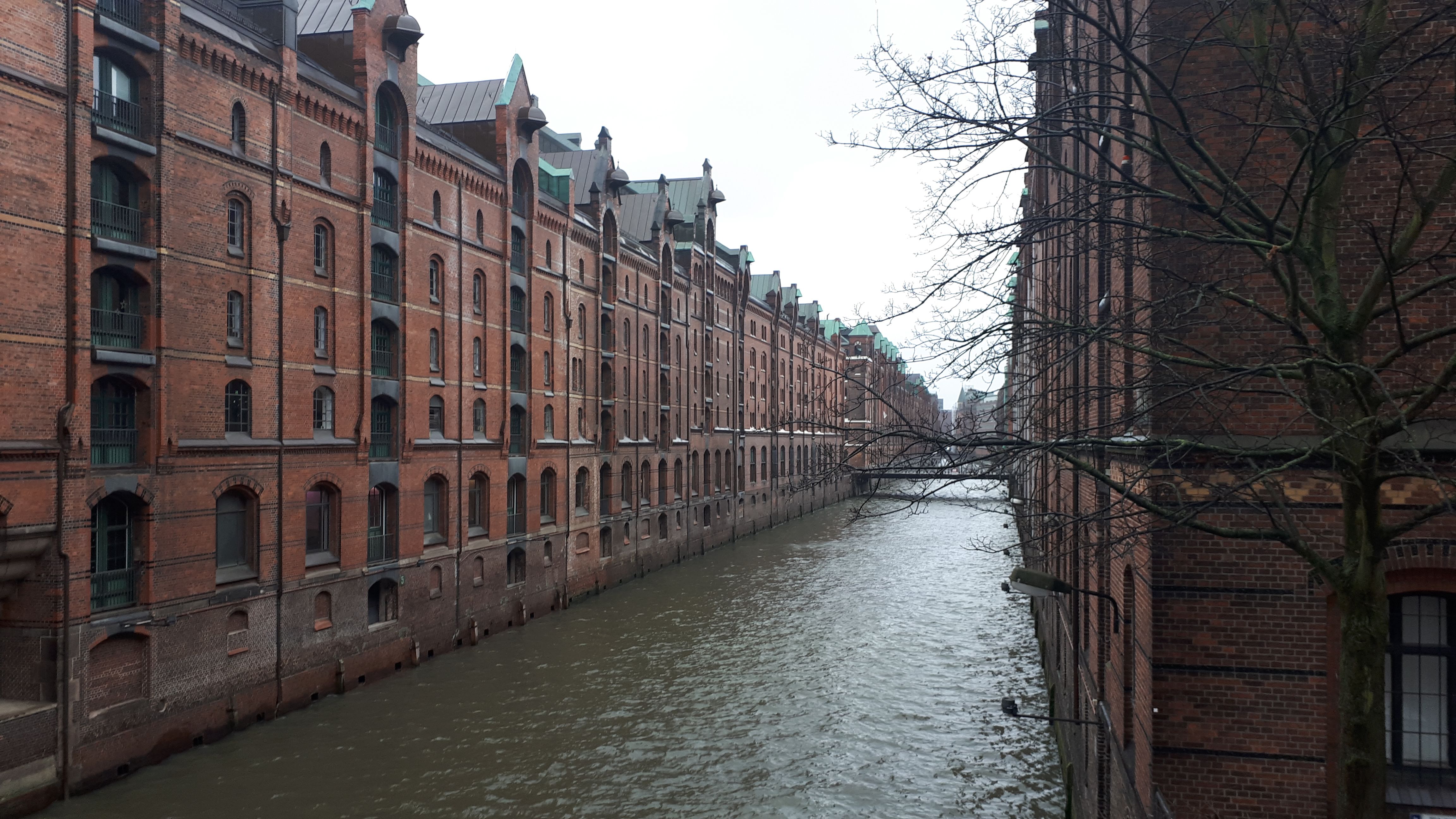 This waterfront concert hall is a recent addition to the city. The glass structure was built on top of an old warehouse. Our tour ended close by so we headed for the panoramic terrace for a view of the city and port. (Entry to the terrace is ticketed but free of charge). 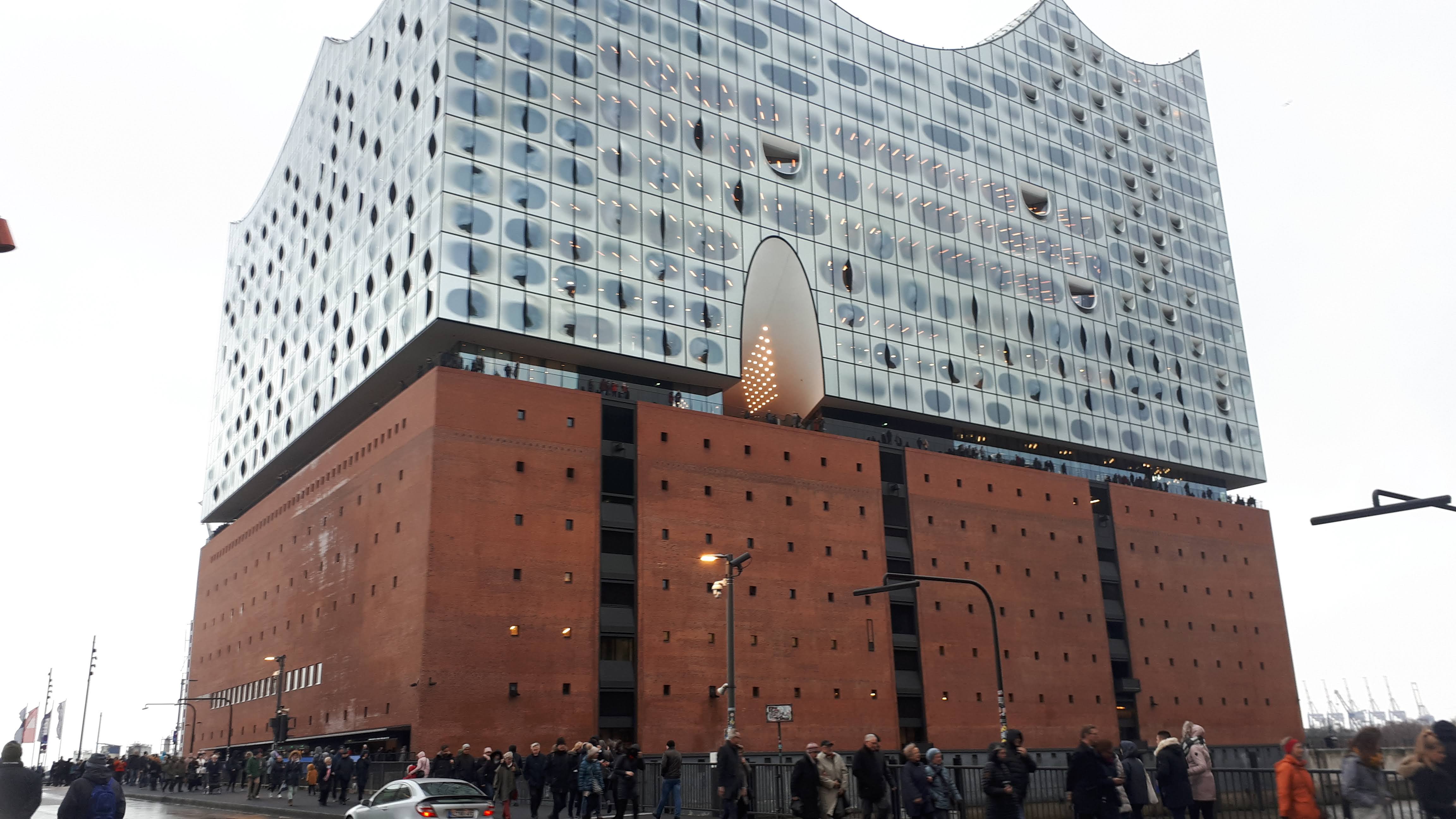 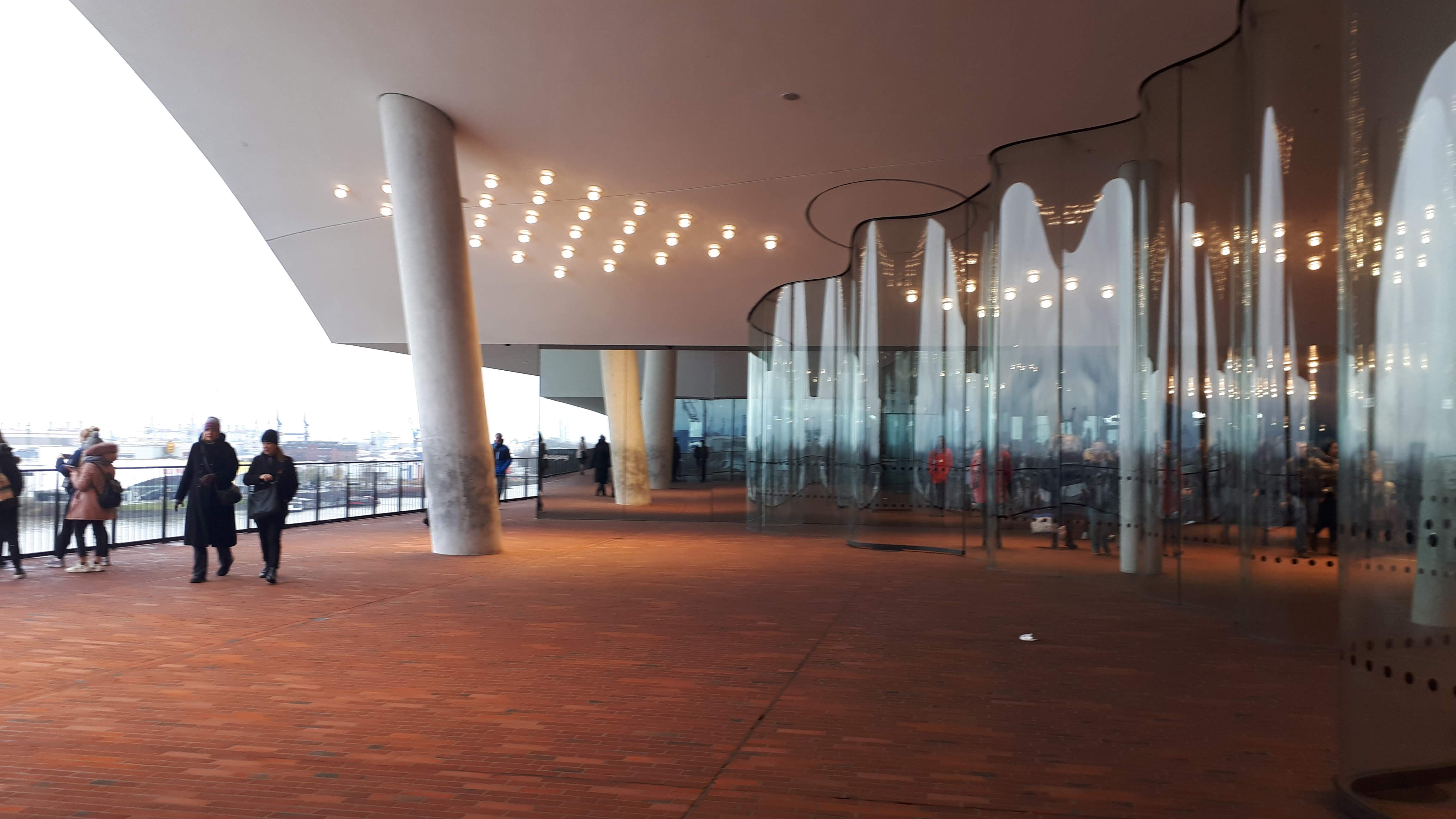 (The glass resembles the waves below) 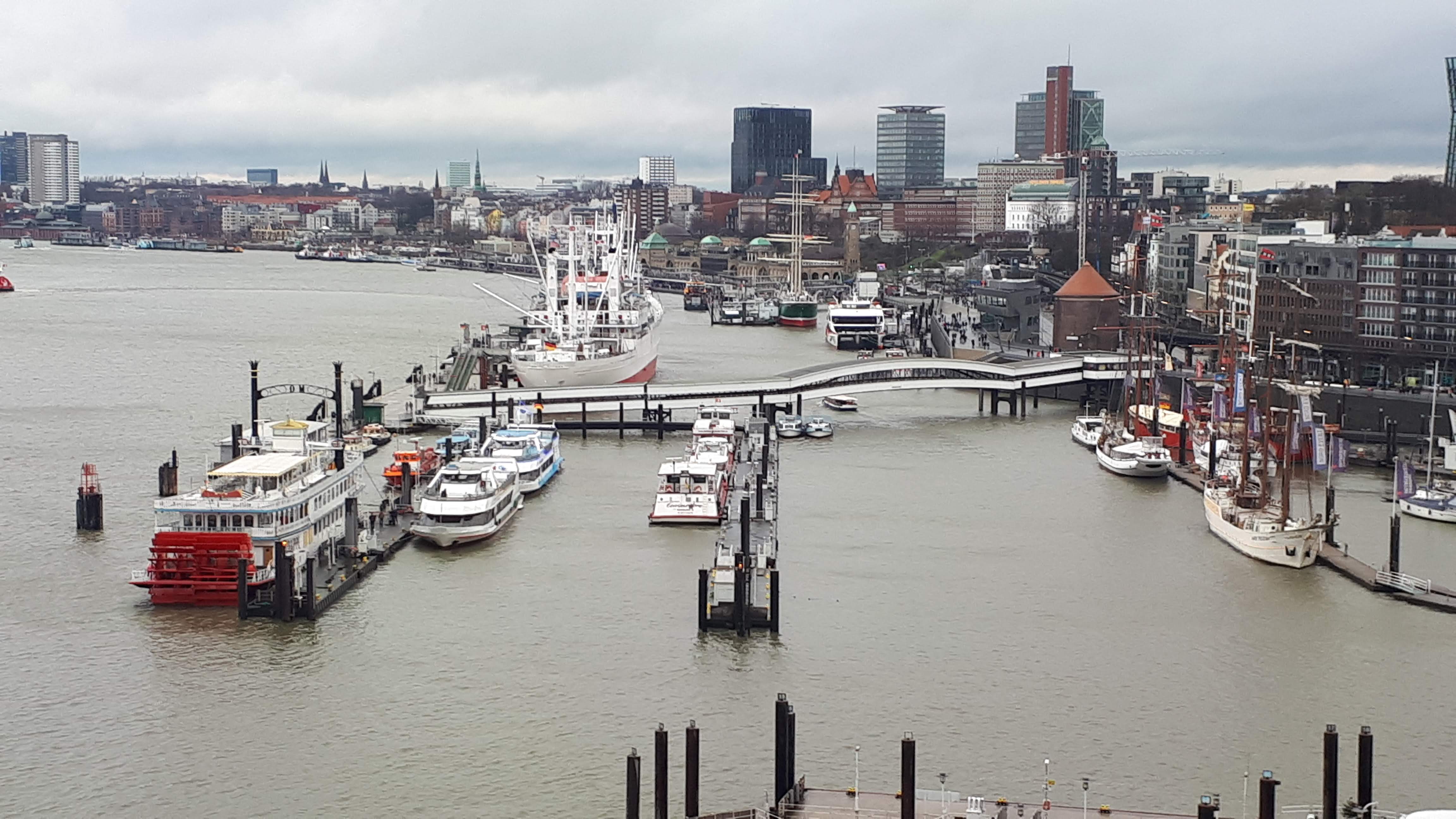 Hamburg airport is very accessible from several European cities. We flew direct from Dublin with Aer Lingus in 1 hour 40 mins.

There is a great public transport system linking the airport to the city.

At the airport, we were able to get a 48 hour pass for 4 adults for €33.50. Great value! That covered our train into town and subway / buses for 2 days. We just needed 4 single tickets back to airport when leaving. The ticket also allows free access to ferry lines in the harbour.

The main consideration is to pick somewhere close to the U or S metro system. We stayed at the Mercure Hamburg Hotel Mitte. It was about 7/ 8 minute walk to Schlump station which was only a few metro stops from the centre. The staff were very helpful and friendly and we got a great breakfast. There is a restaurant on site but we didn’t dine in. There is a bar next door for a nightcap. 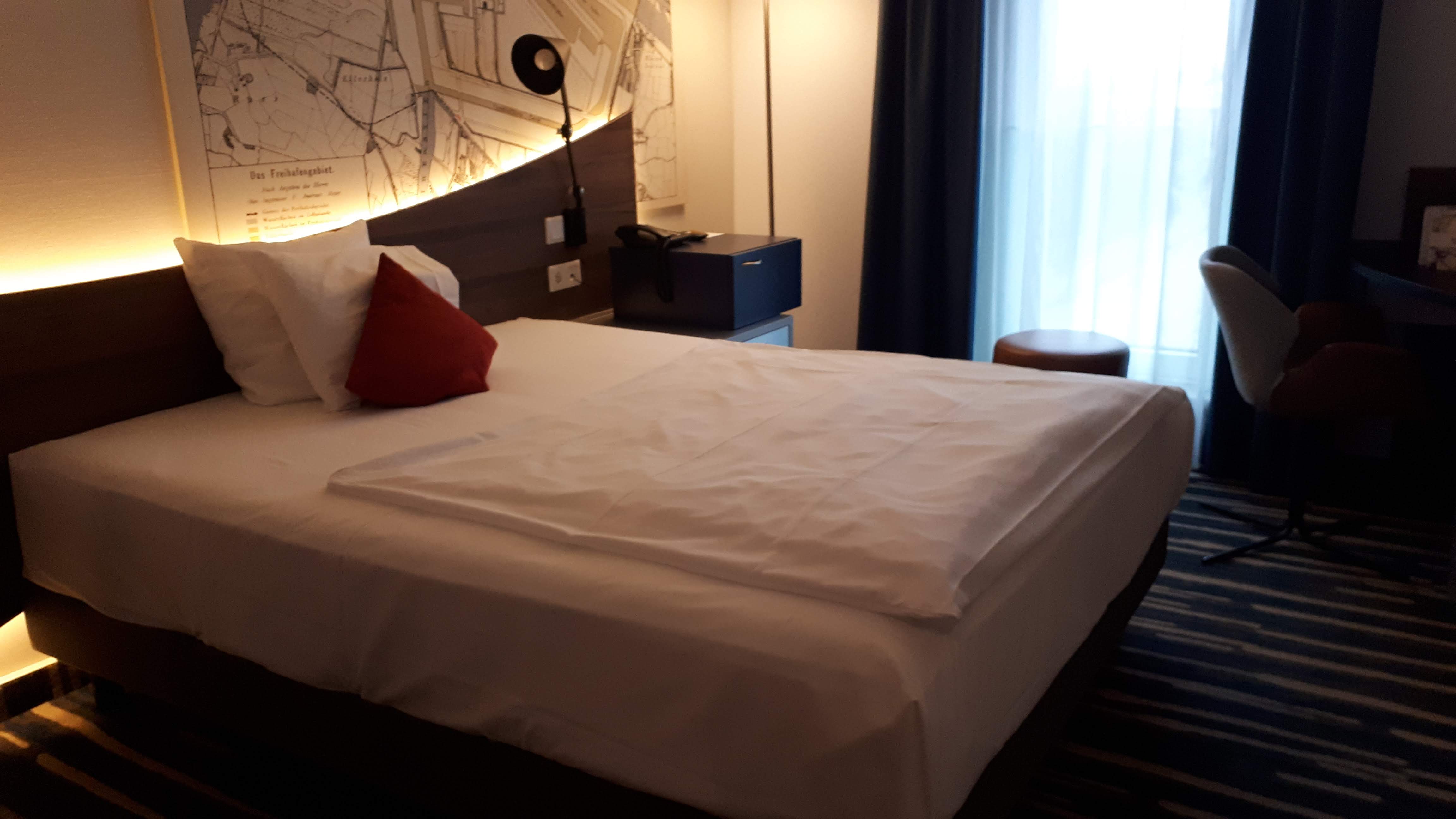 Our room looked out on Hamburg’s TV Tower… 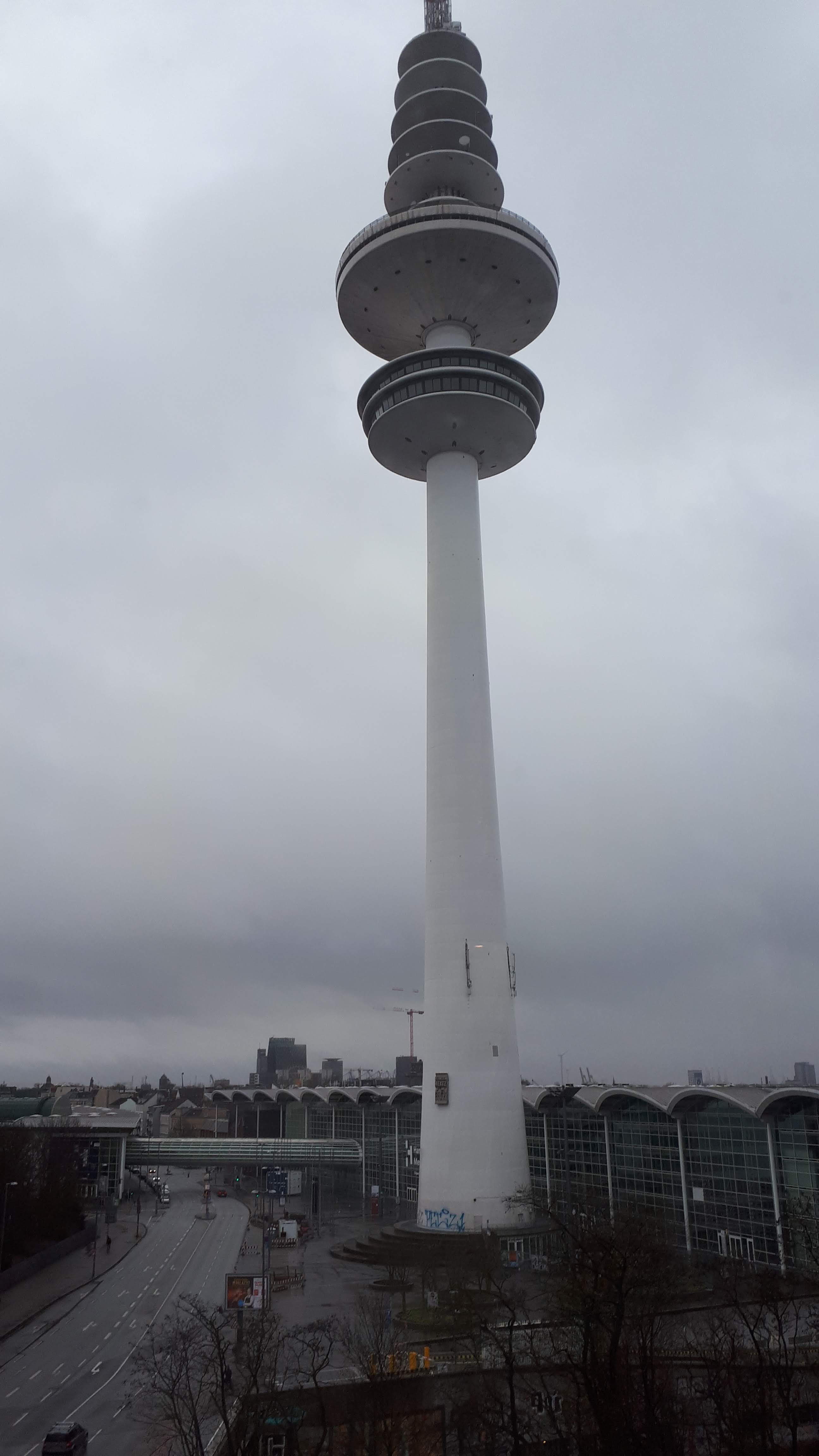 Note – stores remain closed on Sundays as do many coffee shops etc.

Security is tight at the airport which means lots of baggage checks and body searches. The queues were very long as a result so allow enough time. (We arrived 2 hours before our flight and had to go straight to the gate by the time the 4 of us were through security).

Read more about my trip to Hamburg: Hamburg’s Xmas Markets