You cannot visit Mexico City without getting caught up in the Diego Rivera- Frida Kahlo story.   Even if you’ve zero interest in art,  it’s difficult to avoid this immensely talented,  eccentric couple who have left such a mark on this city.

His politics were firmly left wing and his art features themes of economic inequality and the glorification of all things Mexican.

His legacy is clearly visible and easily accessed in the city:

The Palace is the seat of  Mexico’s Federal Executive and Rivera’s murals adorn a huge stairwell and several hallways.  ‘The History of Mexico’  was painted between 1929 and 1935.  It features the history of the country from pre-Columbian times to the 1930’s and includes a study of the indigenous Aztecs before colonisation as well as key events such as the Spanish Conquest and the 1910 Revolution. 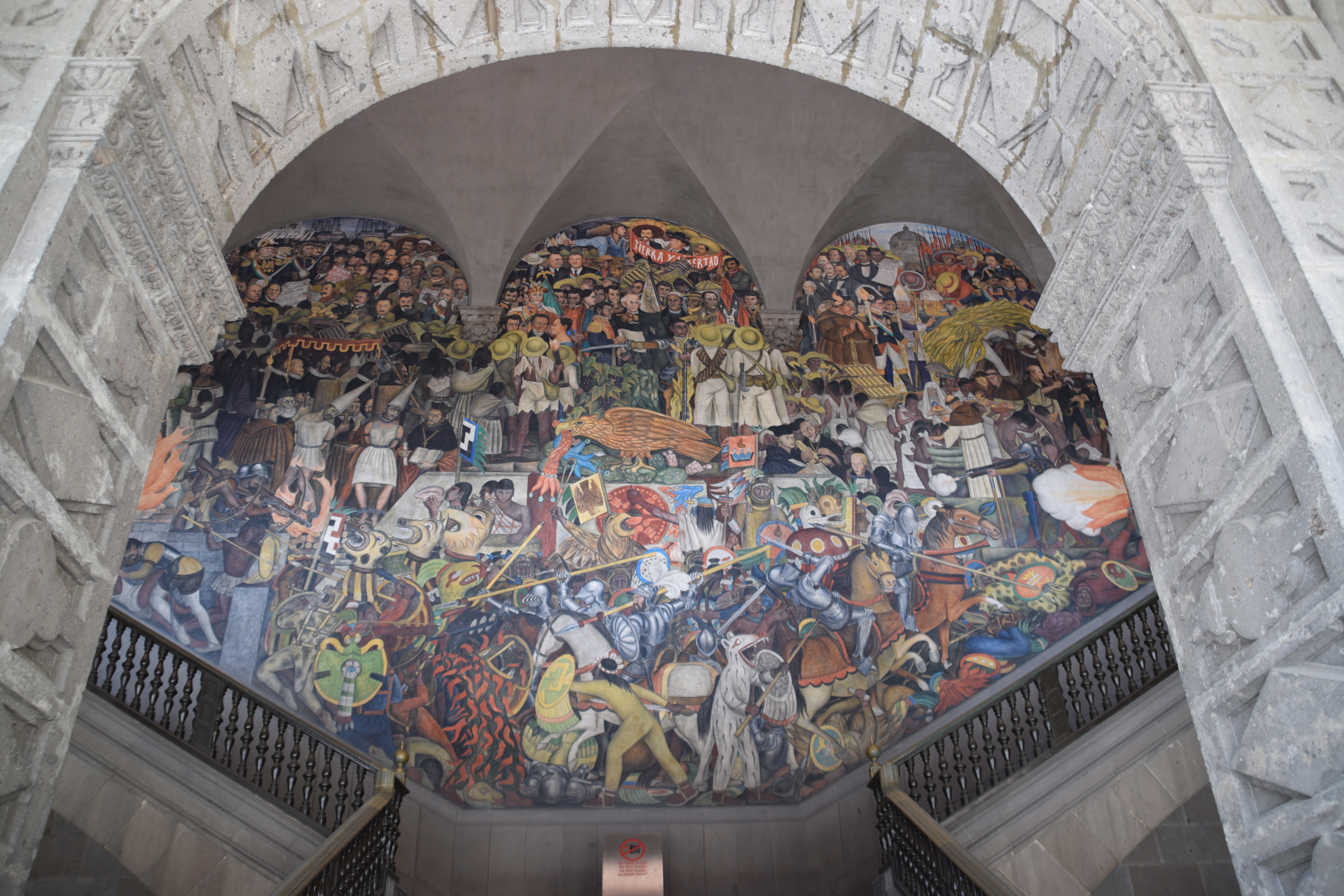 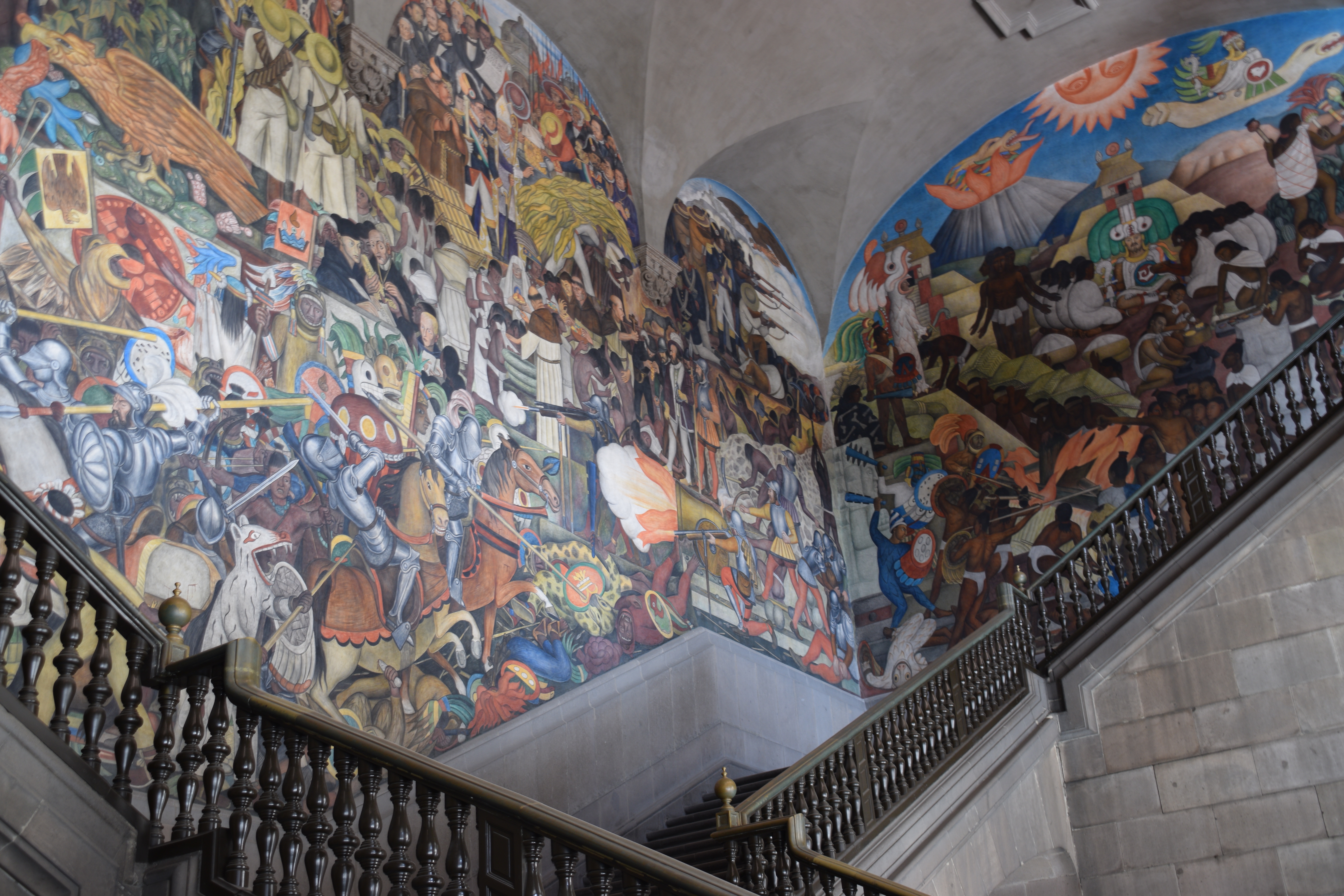 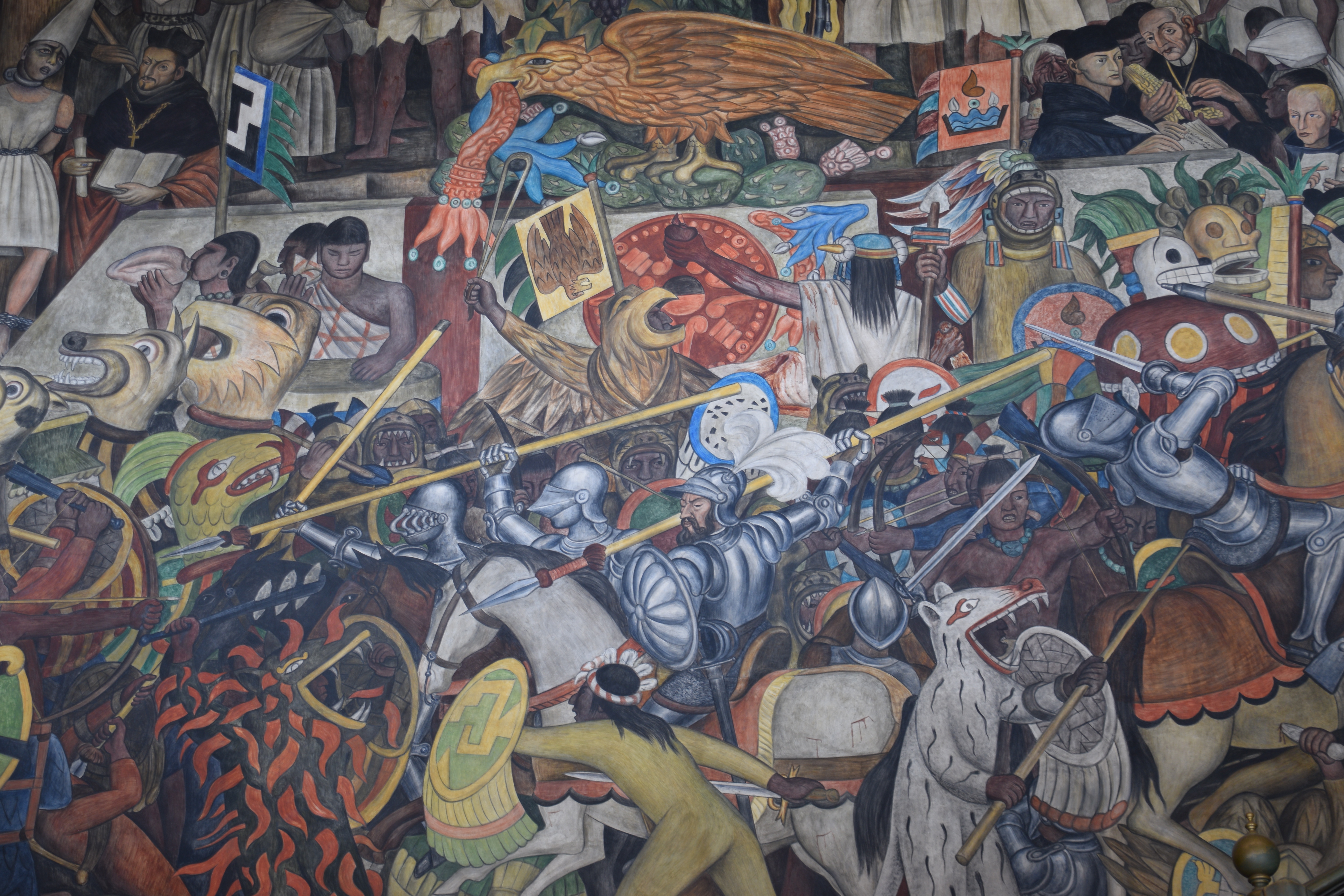 This public building boasts no less than 253 panels featuring his familiar themes of blue collar workers and Mexican history. 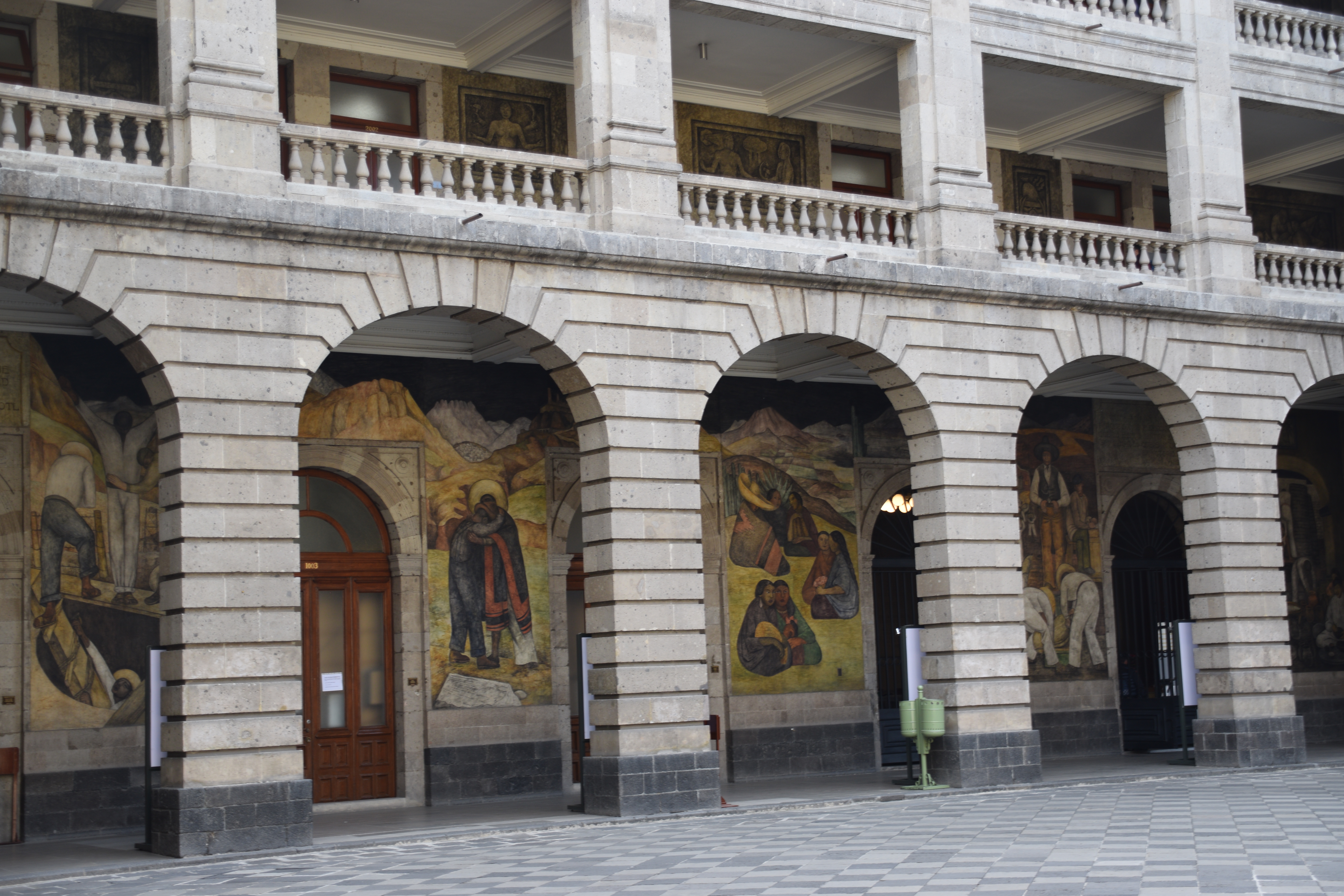 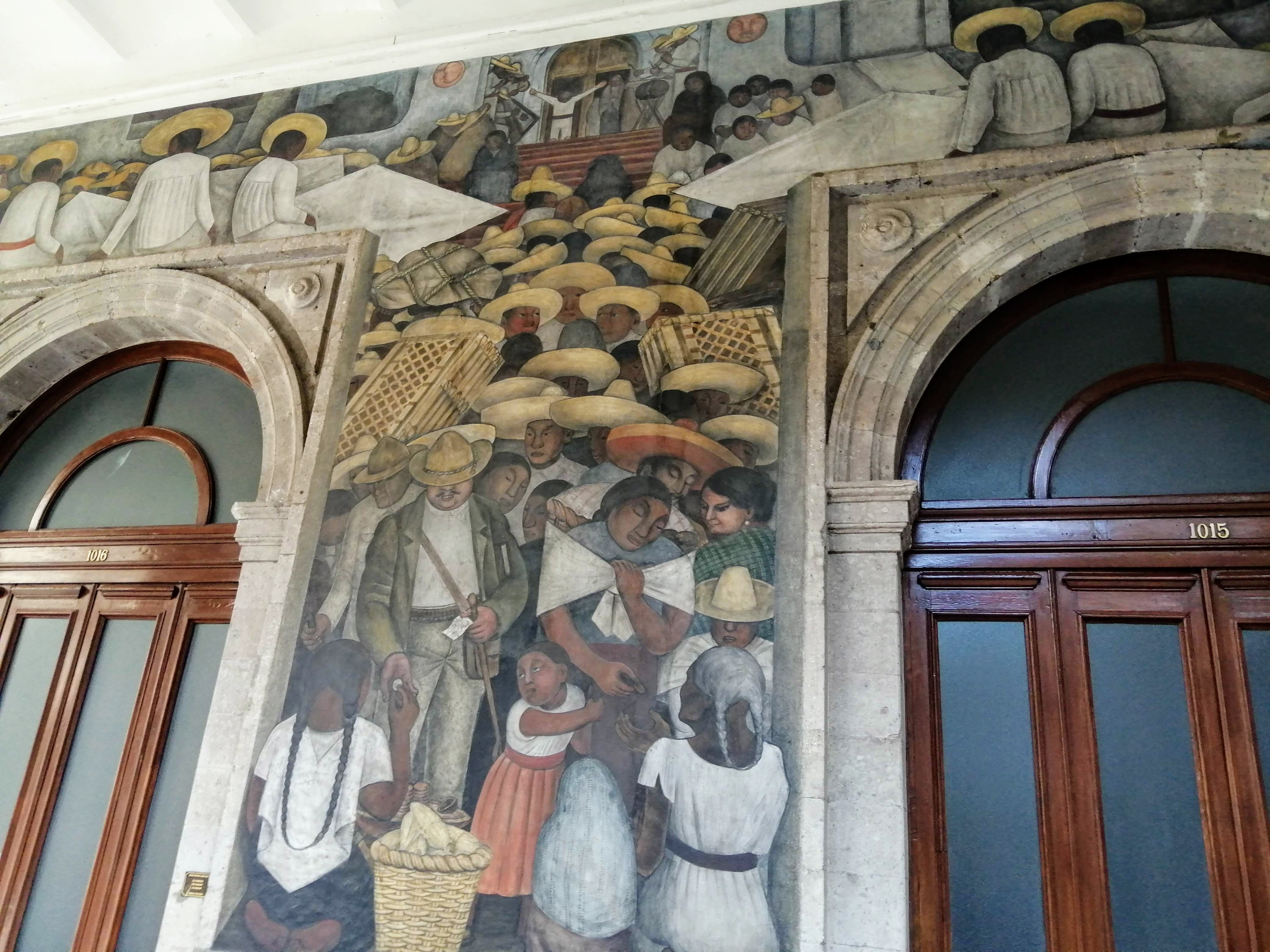 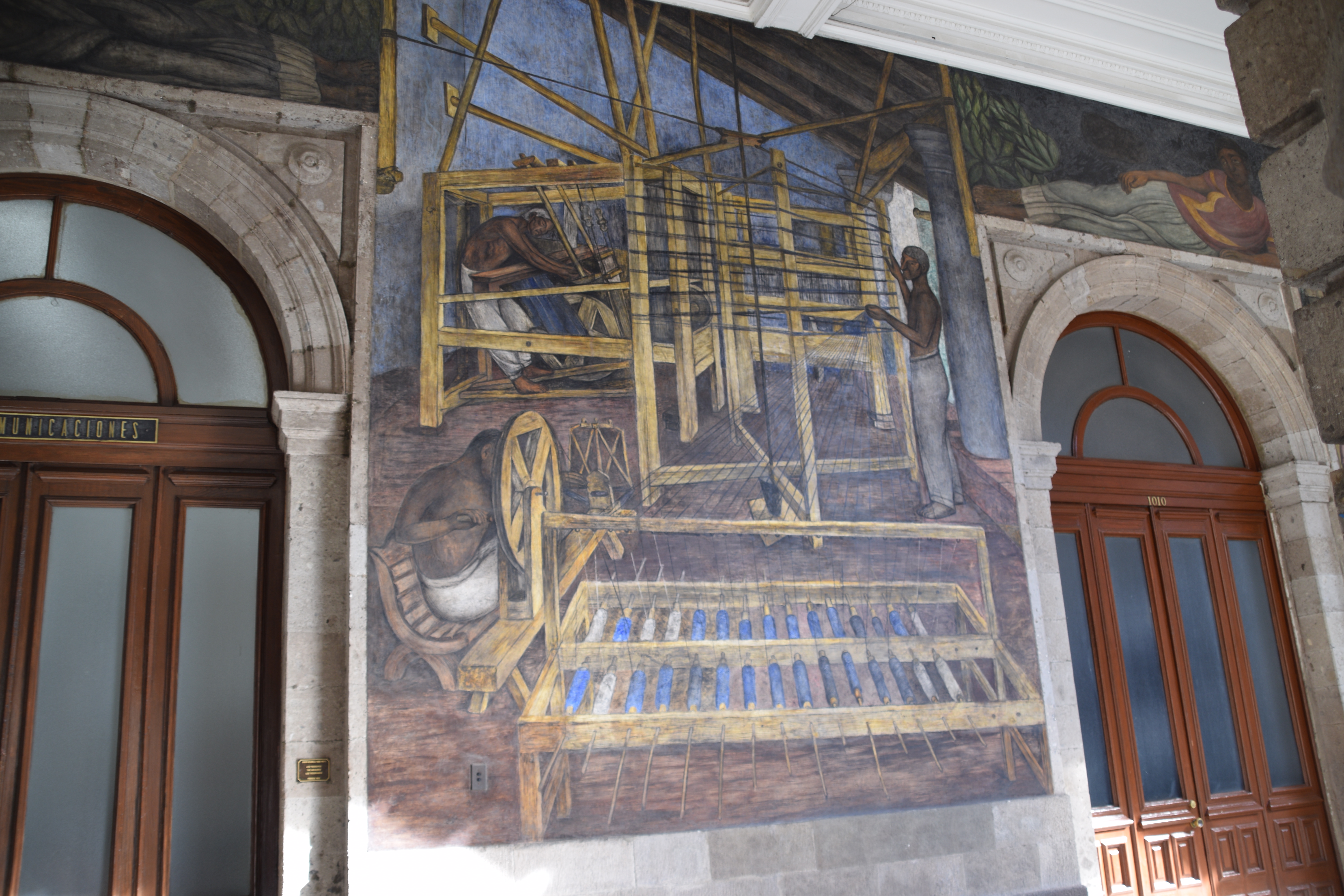 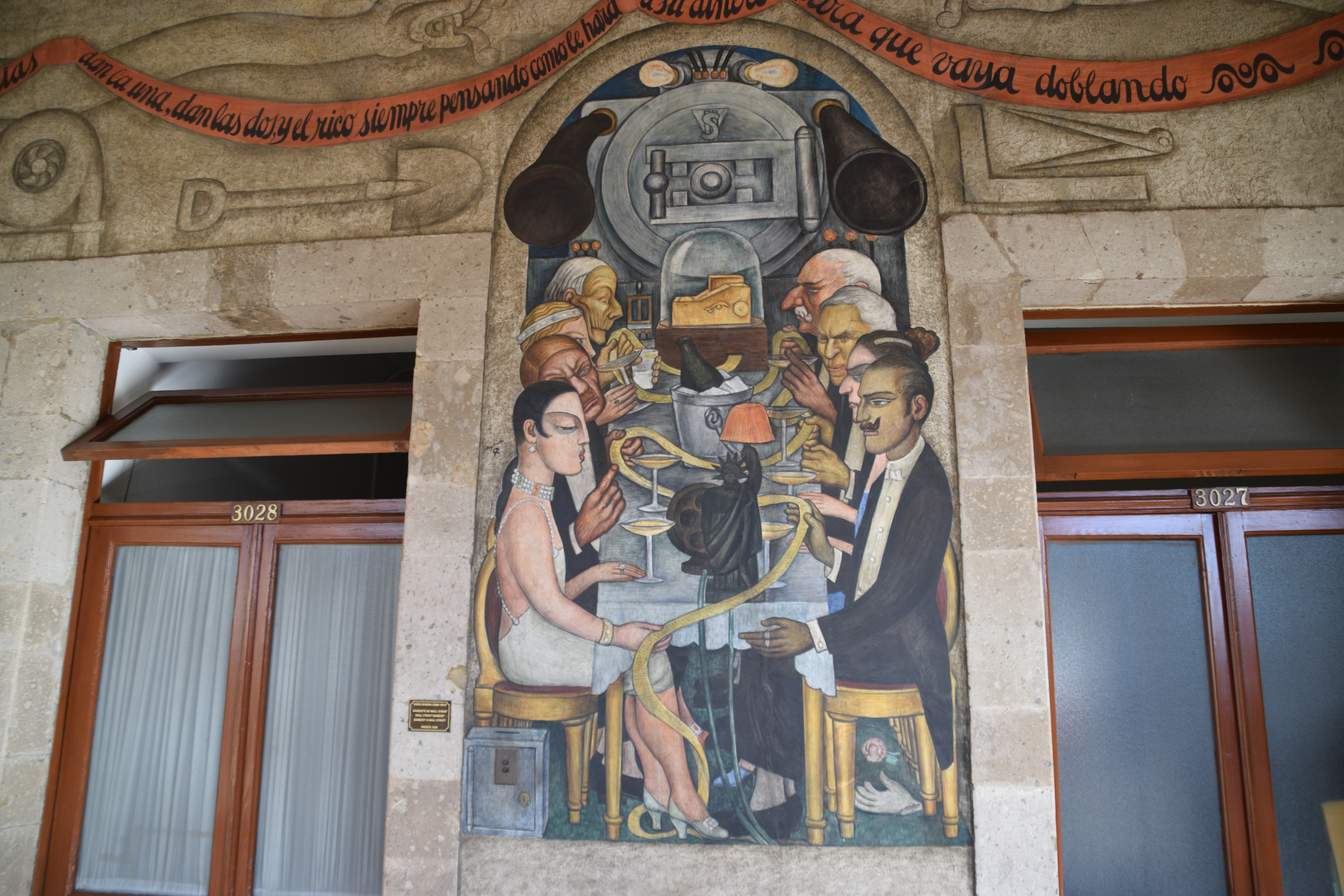 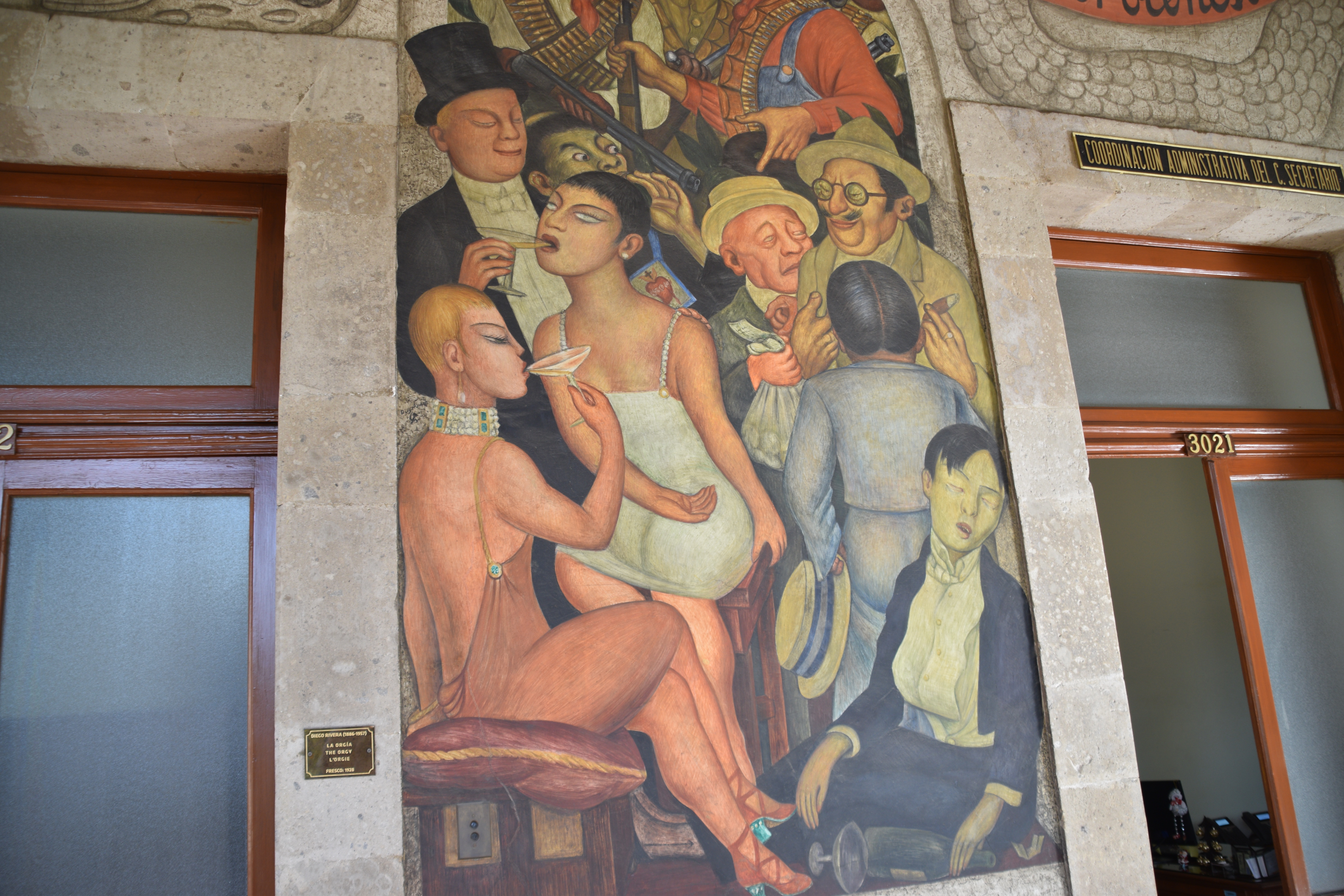 On the 3rd floor of this cultural centre is Rivera’s famous ‘El hombre en el cruce de caminos’ (Man at the Crossroads).   This mural was commissioned for NYC’s Rockefeller Center in 1933.  The idea was to show the contrast between capitalism and communism and was approved by the family.  When a NYC newspaper described the piece as anti capitalist propaganda,  Rivera secretly added an image of Lenin and a Soviet May Day parade in protest.   Rivera refused to remove Lenin’s portrait so Nelson Rockefeller ordered the mural to be painted over.  Rivera repainted the mural in Mexico. 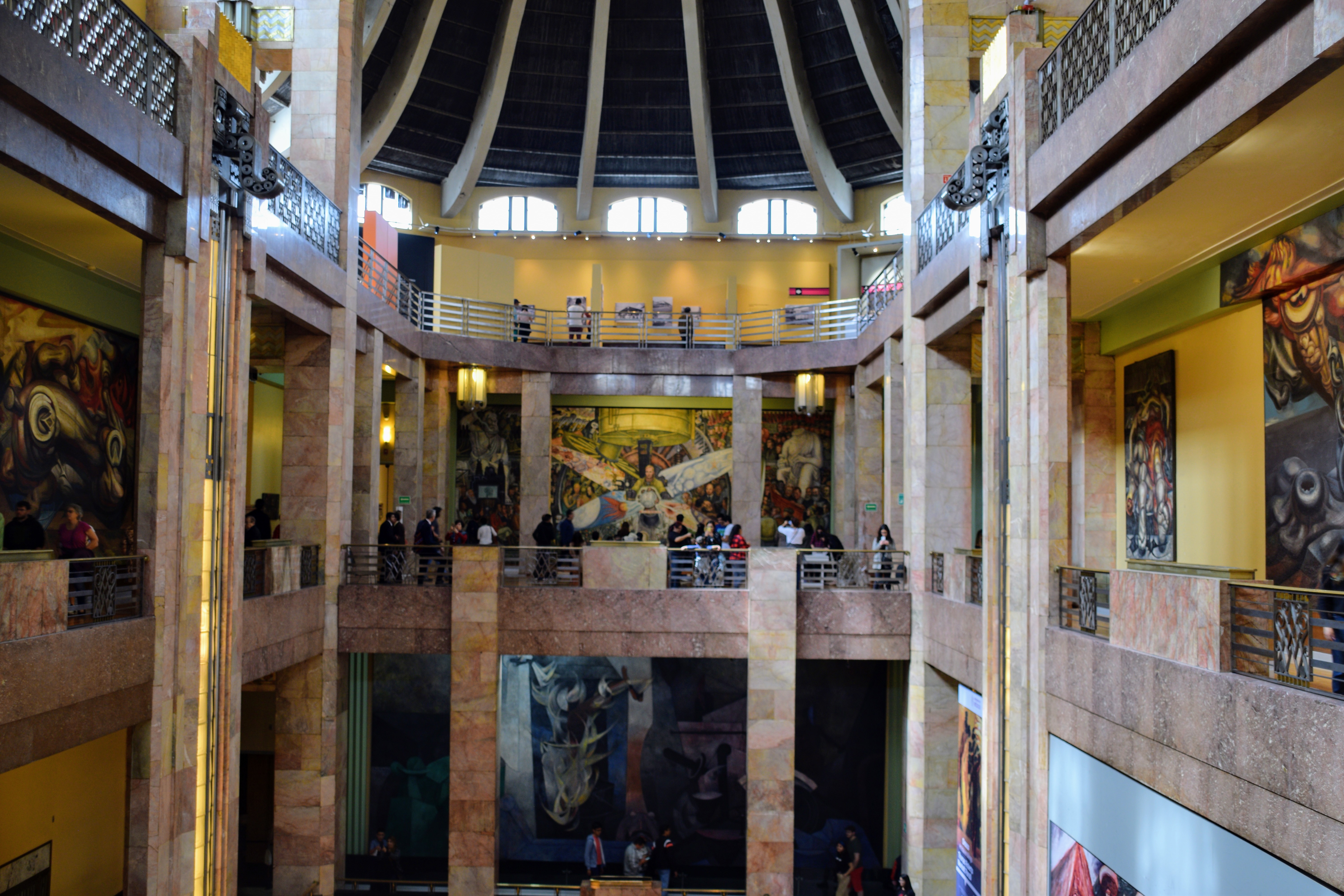 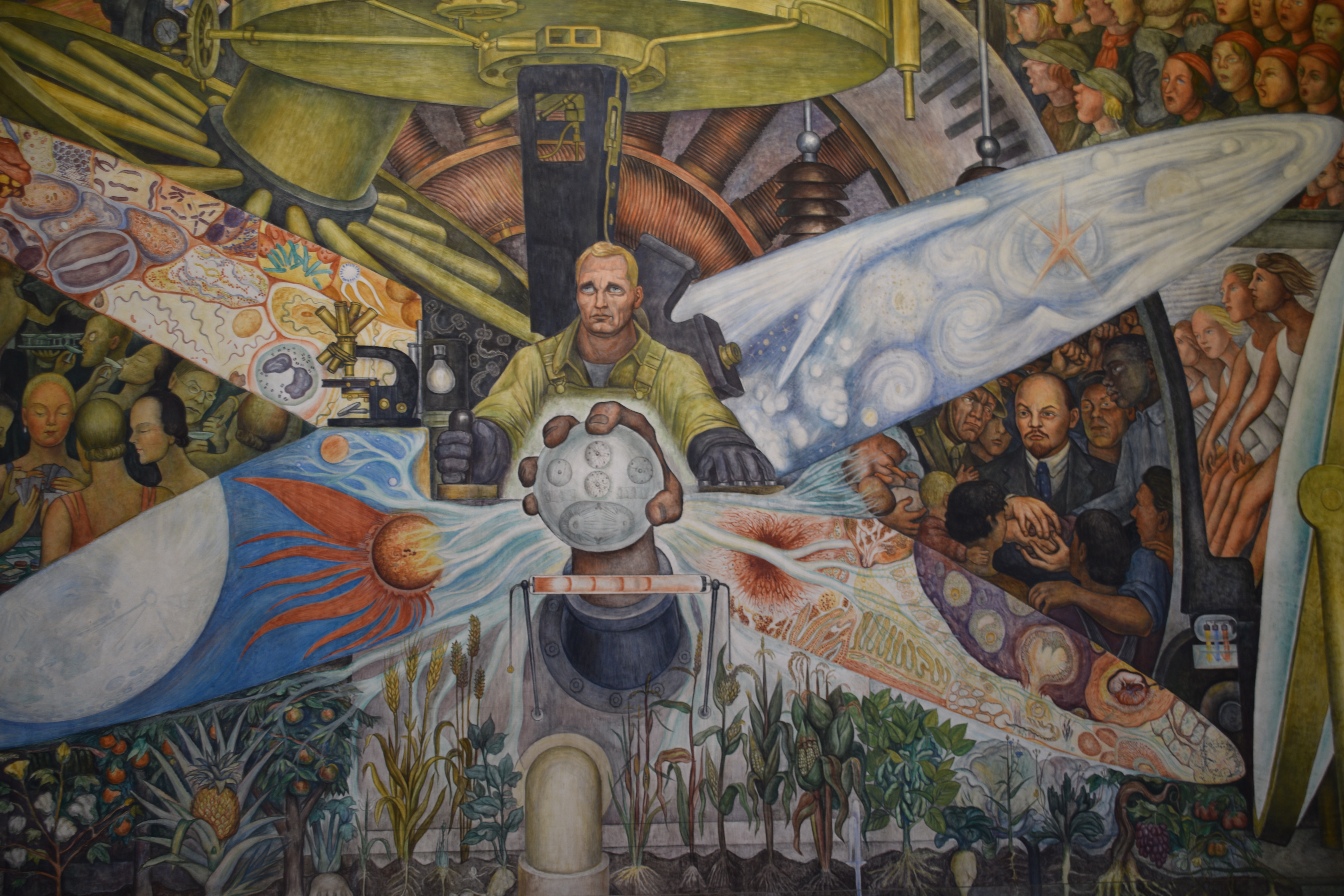 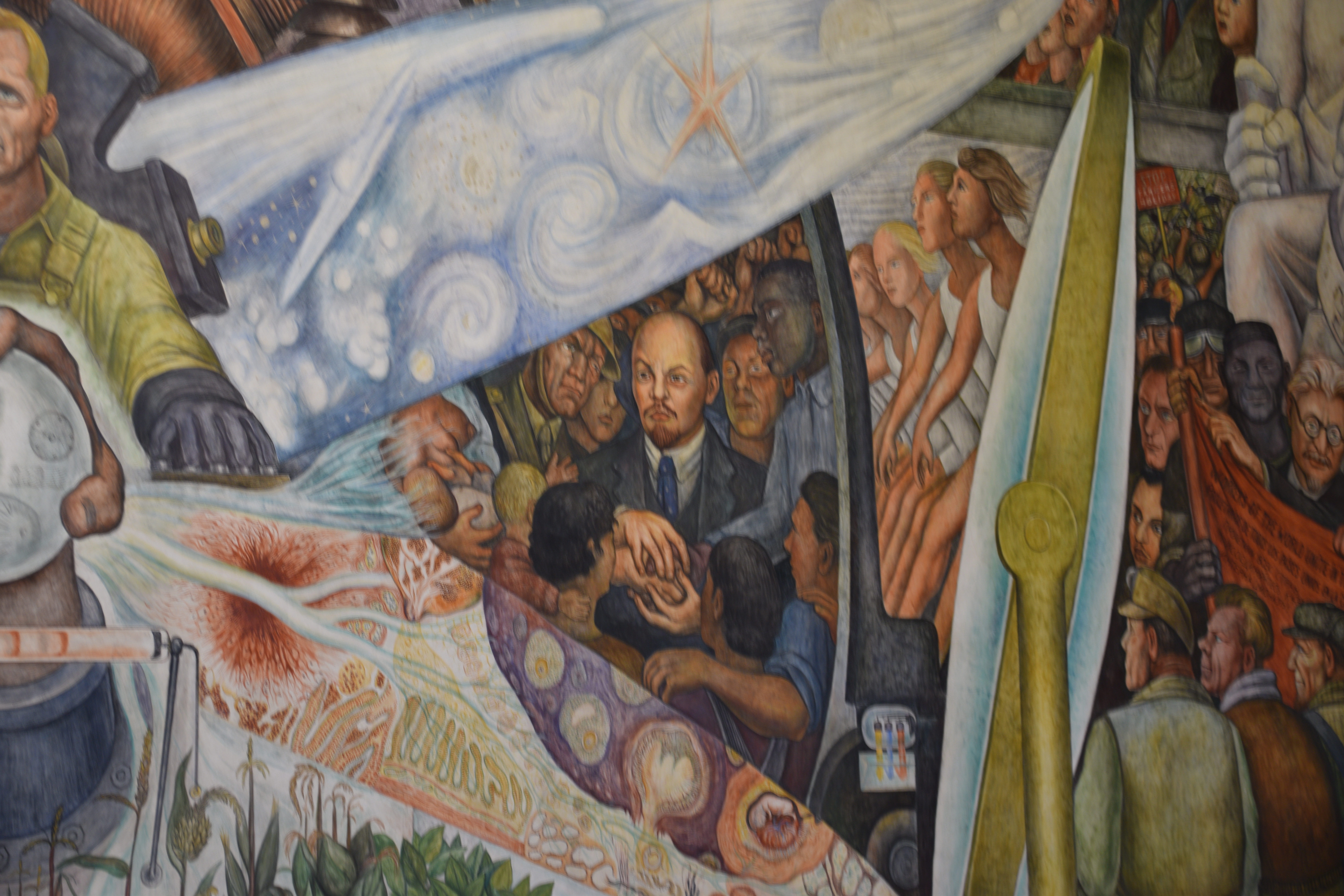 ‘Dream of a Sunday Afternoon in Alameda Central’ is a 50 foot mural with hundreds of characters from 400 years of Mexican History strolling through the park.  The left side highlights the conquest and colonisation of Mexico,  the fight for independence and the revolution occupies the centre and towards the right are modern achievements. 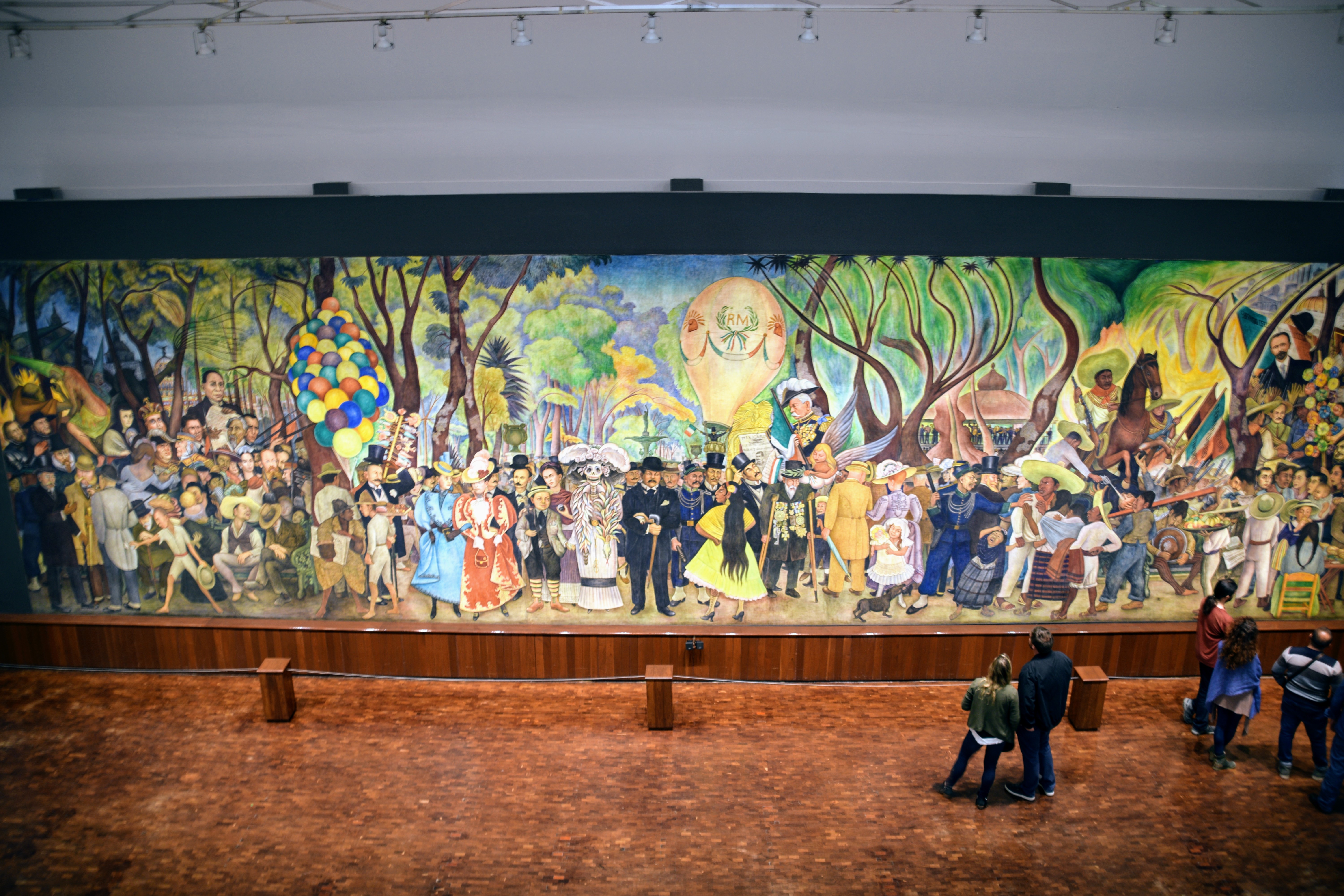 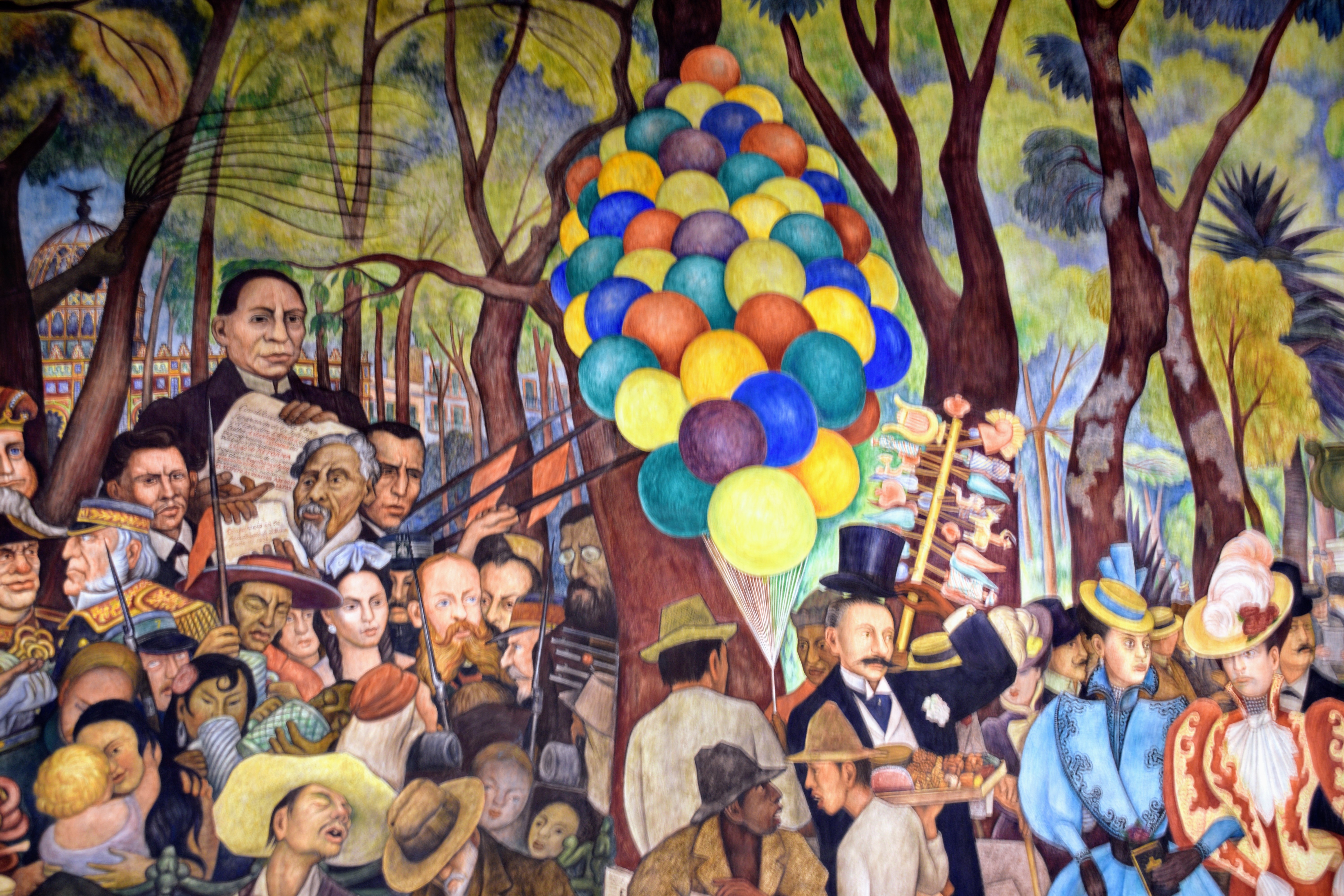 The mural was originally located in the Hotel Del Prado.  The hotel was condemned after an earthquake in 1985.  The mural was saved and relocated in pieces  to this site close to the park.

Kahlo was born in 1907.   She contracted polio at the age of 6 which left her right leg thinner and shorter than her left.   Aged 18,  she was traveling on a bus which was involved in a traffic accident.  She suffered numerous broken bones and a damaged spinal cord.  Her recuperation took over a year during which time she gave up a pre-med programme and began to paint.

She went on to create 143 paintings of which 55 are self portraits. 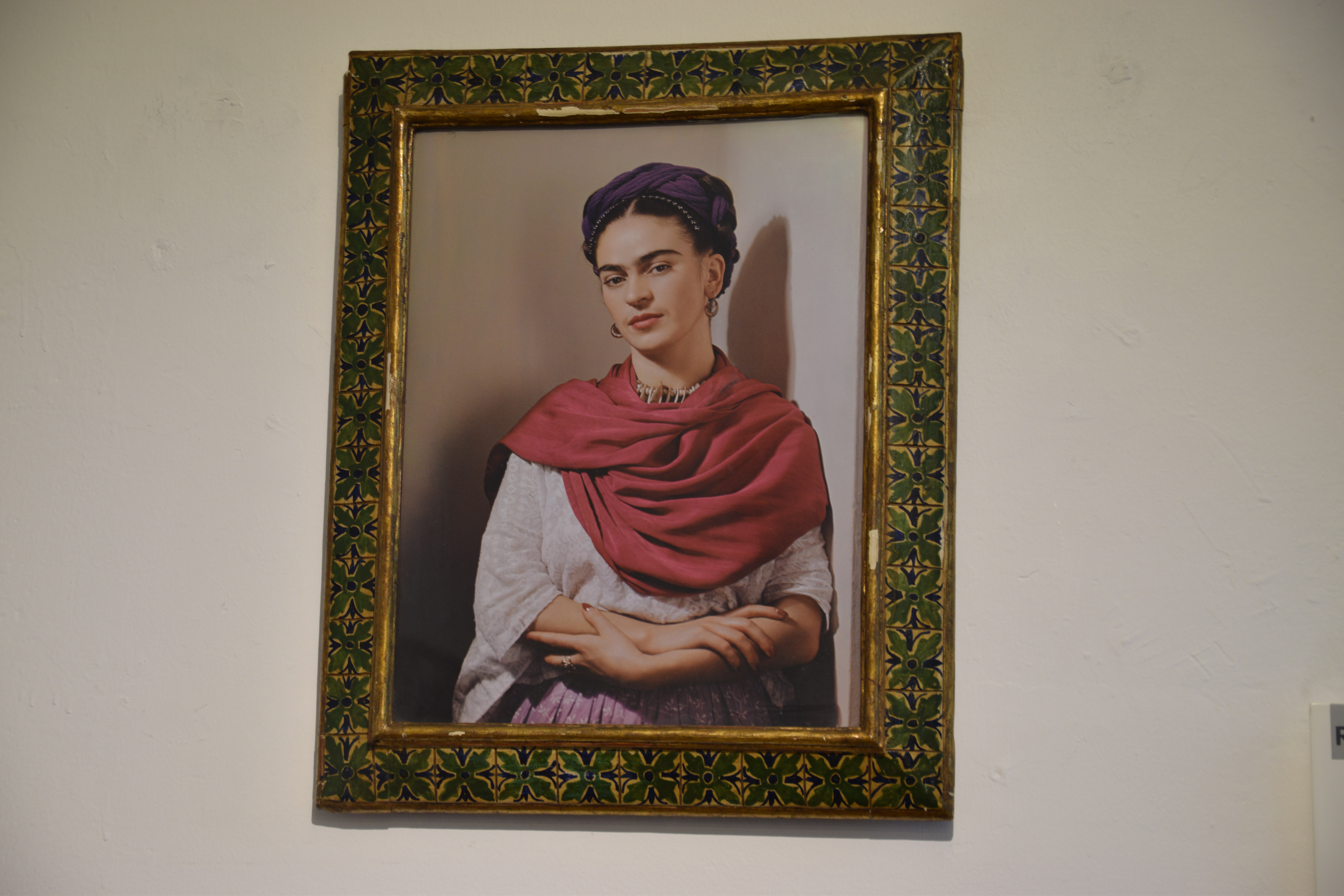 She rejected conventional fashion in favour of traditional Mexican dress – the long skirts allowed her mask her physical injuries.   She braided her hair and rebelled against the expected feminine ideal with her unibrow and facial hair.

During the course of her lifetime,  she endured over 30 surgeries.   By 1953,  gangrene had set in to her right foot and her leg was amputated below the knee.   She died the following year,  aged 47,   from a morphine overdose.

They married in 1929.  He’d already been married twice and was 21 years older than her.  The relationship was fiery to say the least and both enjoyed multiple affairs.   They divorced in 1939 only to remarry the following year.

“Perhaps they expect me to wail and moan about ‘how much I suffer’ living with a man like Diego.   But I don’t think that the banks of the river suffer by letting it flow”

When they met,  Rivera was already a well established artist.   Kahlo’s work was largely overshadowed by that of her husband and,  despite her accomplishments,  she was known for most of her life as the wife of the great Diego Rivera.   Her work was not to become widely acclaimed until several years after her death.

Most visitors to Mexico city find their way to La Casa Azul – the Blue House.  Its hard to miss the brightly painted house surrounded by crowds in the neighbourhood of Coyoacán.   This is where Frida was born and grew up.  She eventually bought the house from her parents and this is where she mostly lived with Diego.

The house wraps around a central patio and once inside,  visitors can immerse themselves in her world.  There are a few paintings from both artists on display.  There are collections, artifacts,  her clothes and painting materials.

(Leon Trotsky was granted political asylum in Mexico in 1936 and lived with his wife at Casa Azul for a while.  He began an affair with Frida,  communicating in English which Trotsky’s wife did not understand.   Frida soon tired of ‘the old man’ and the Trotskys moved to another house in the neighbourhood.   He was assassinated in 1940.) 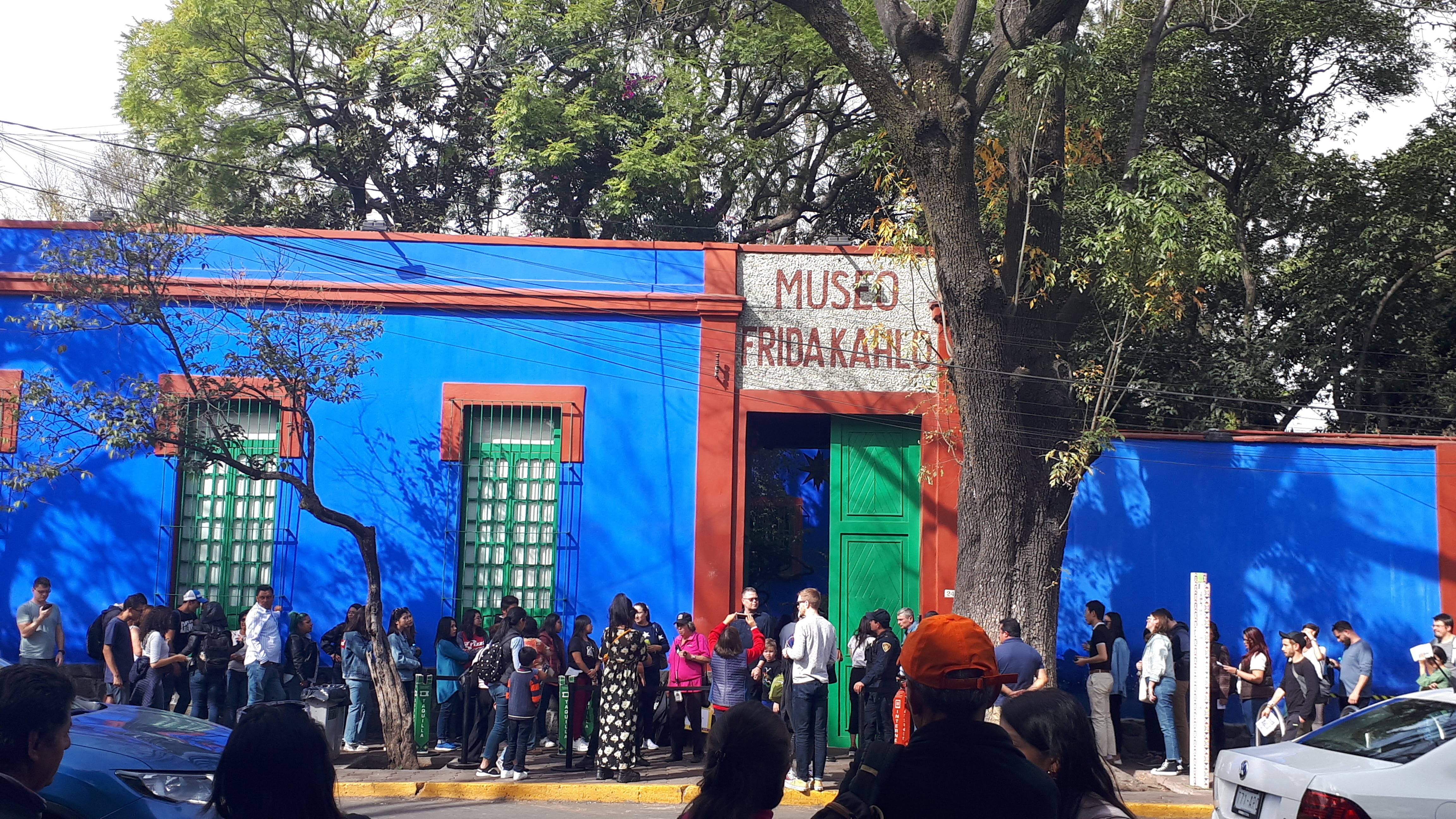 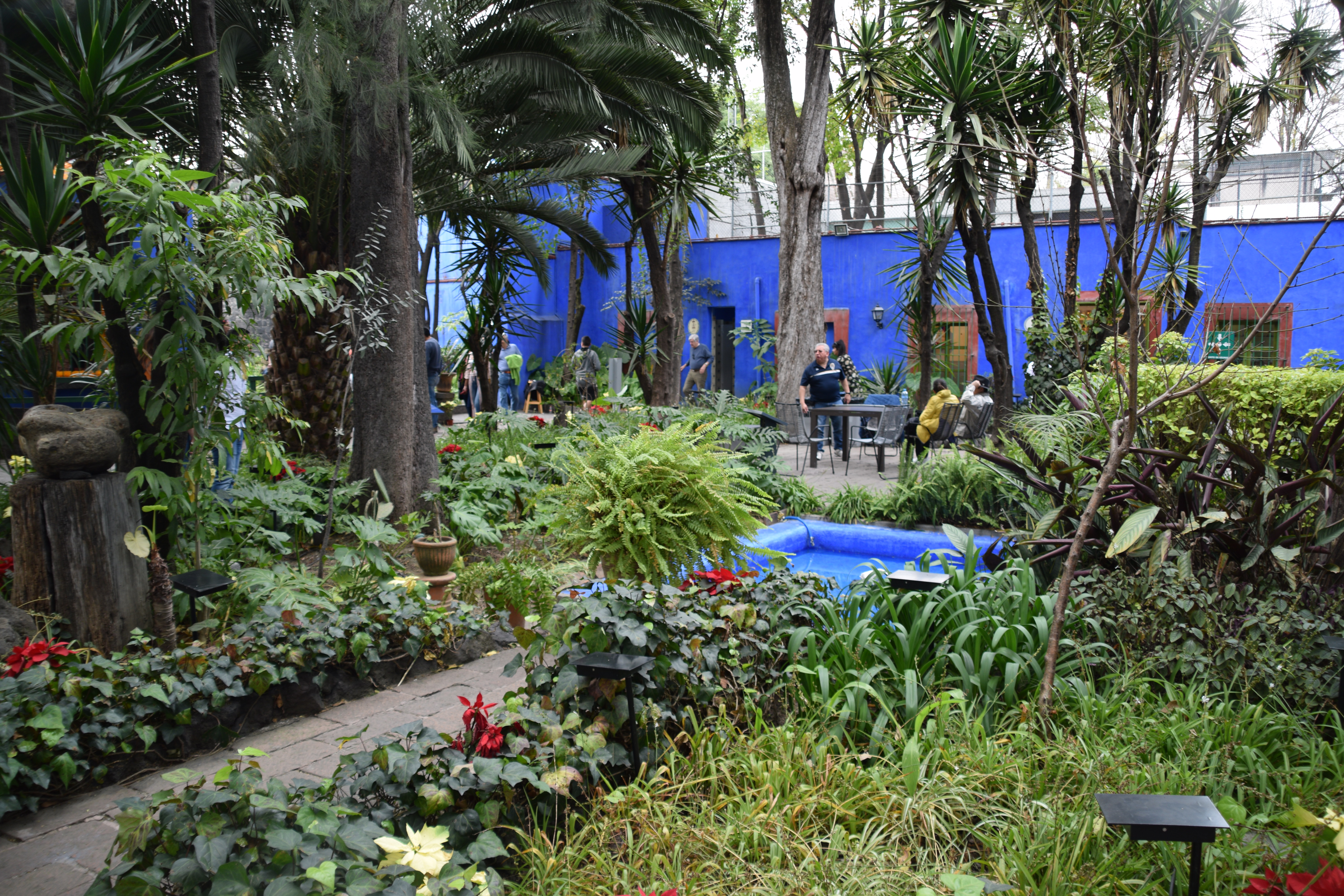 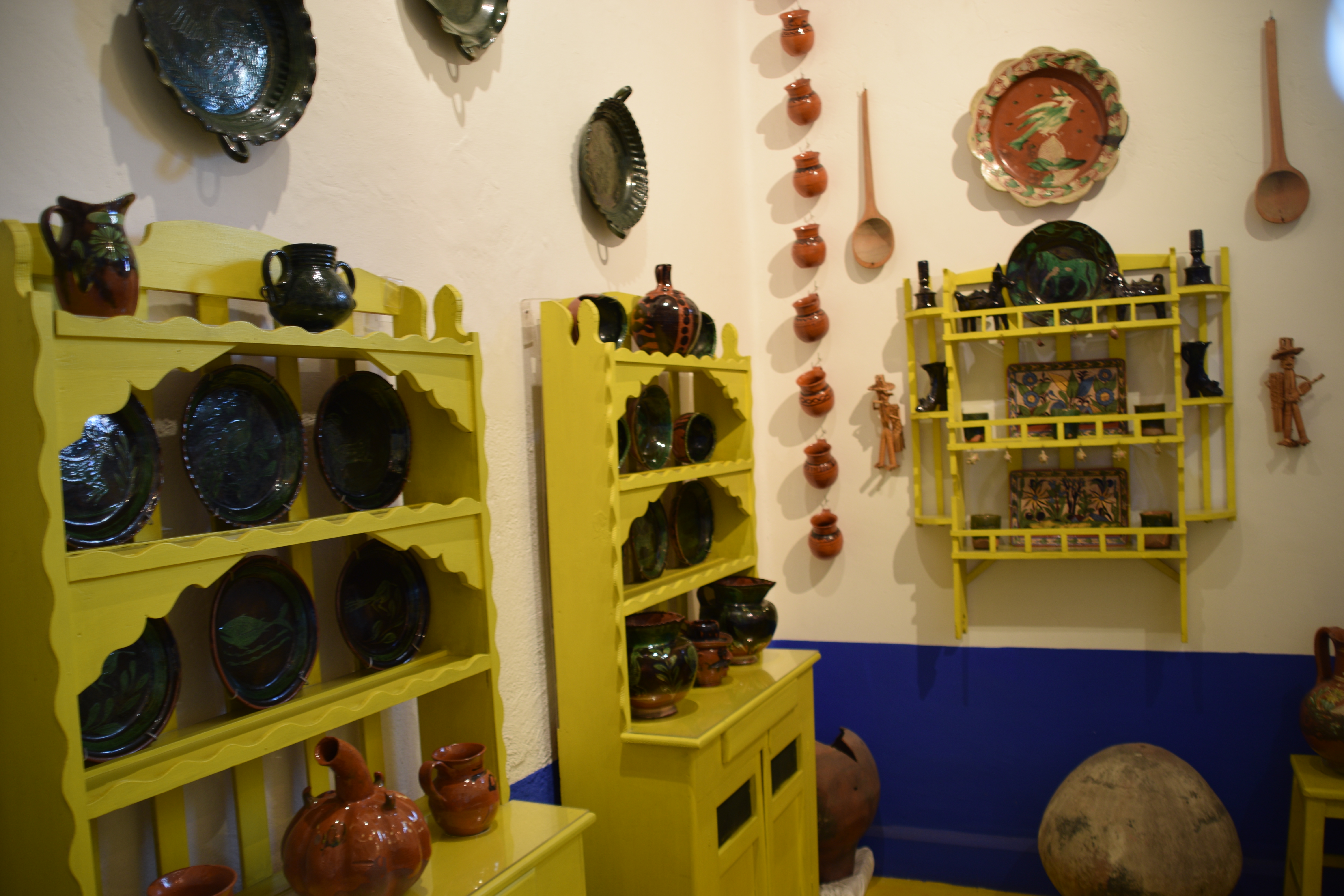 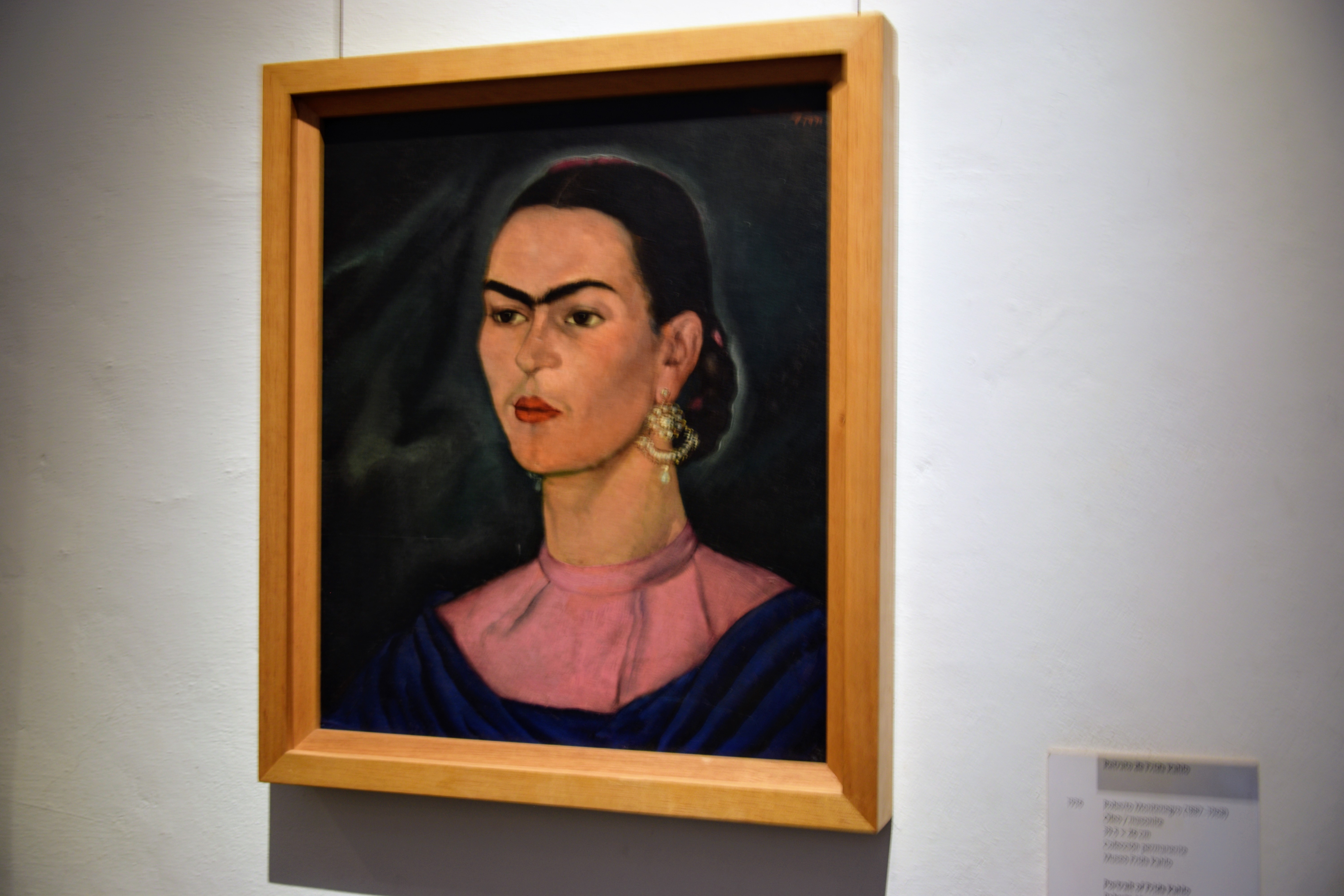 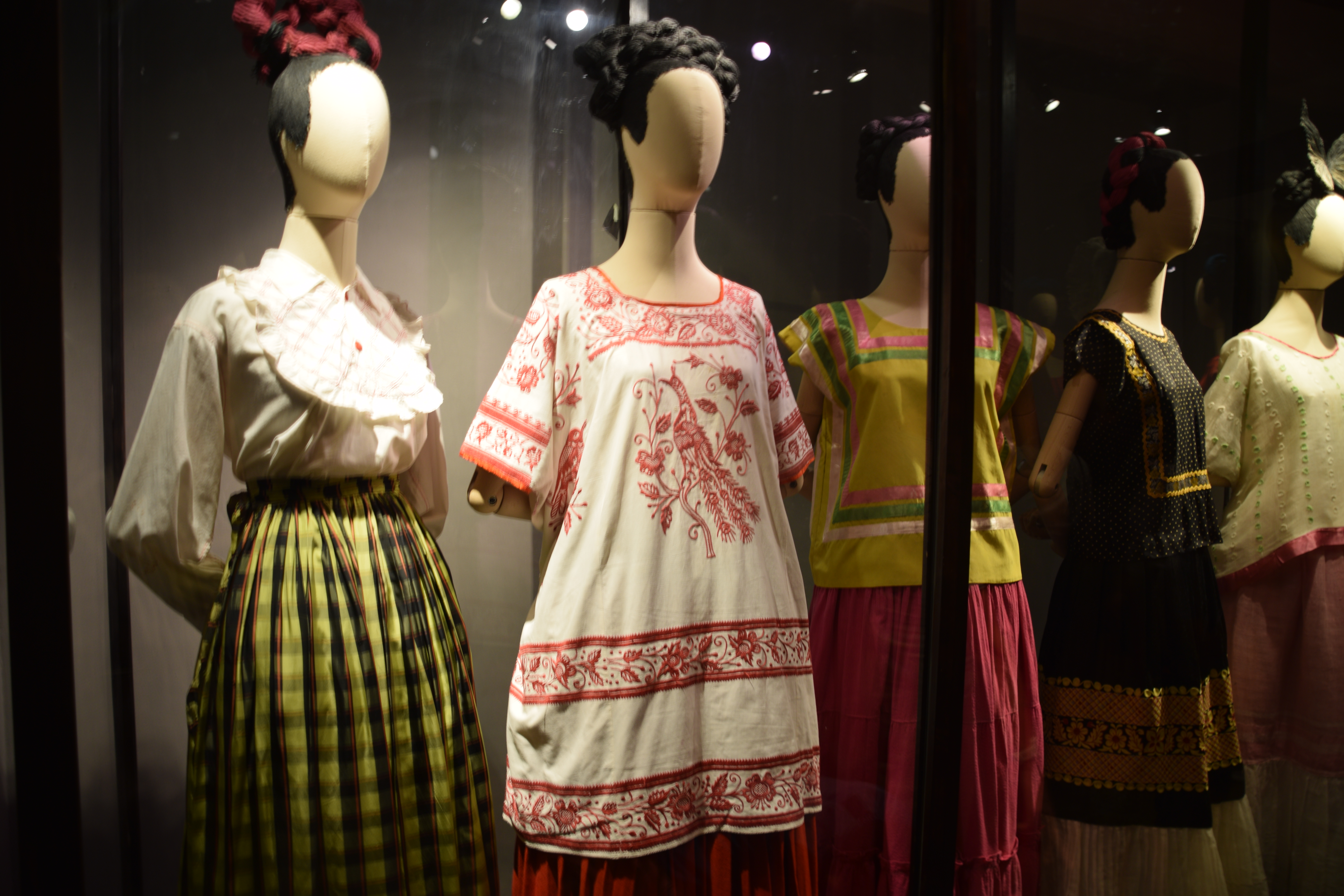 (Some of the dresses that formed part of her iconic look) 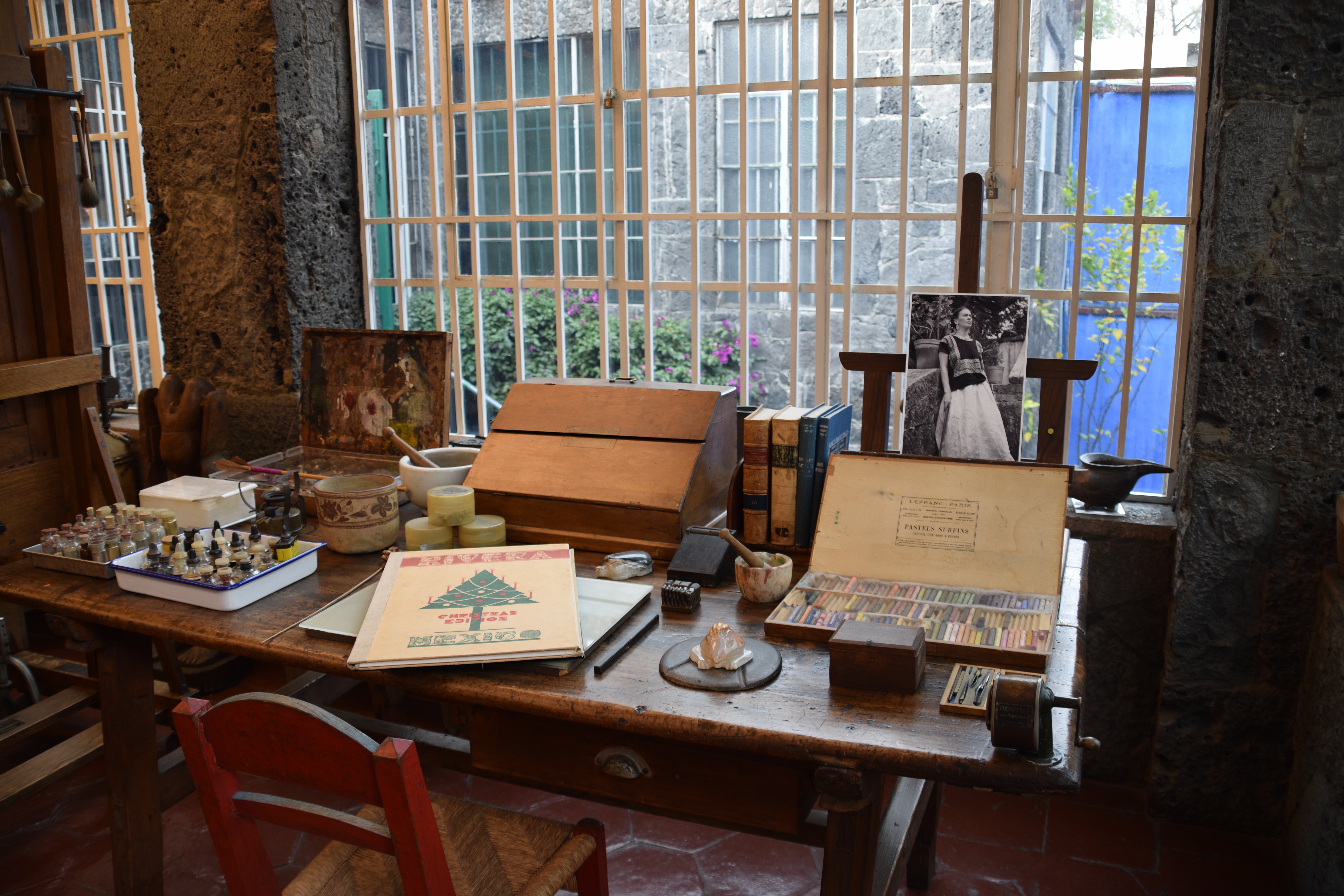 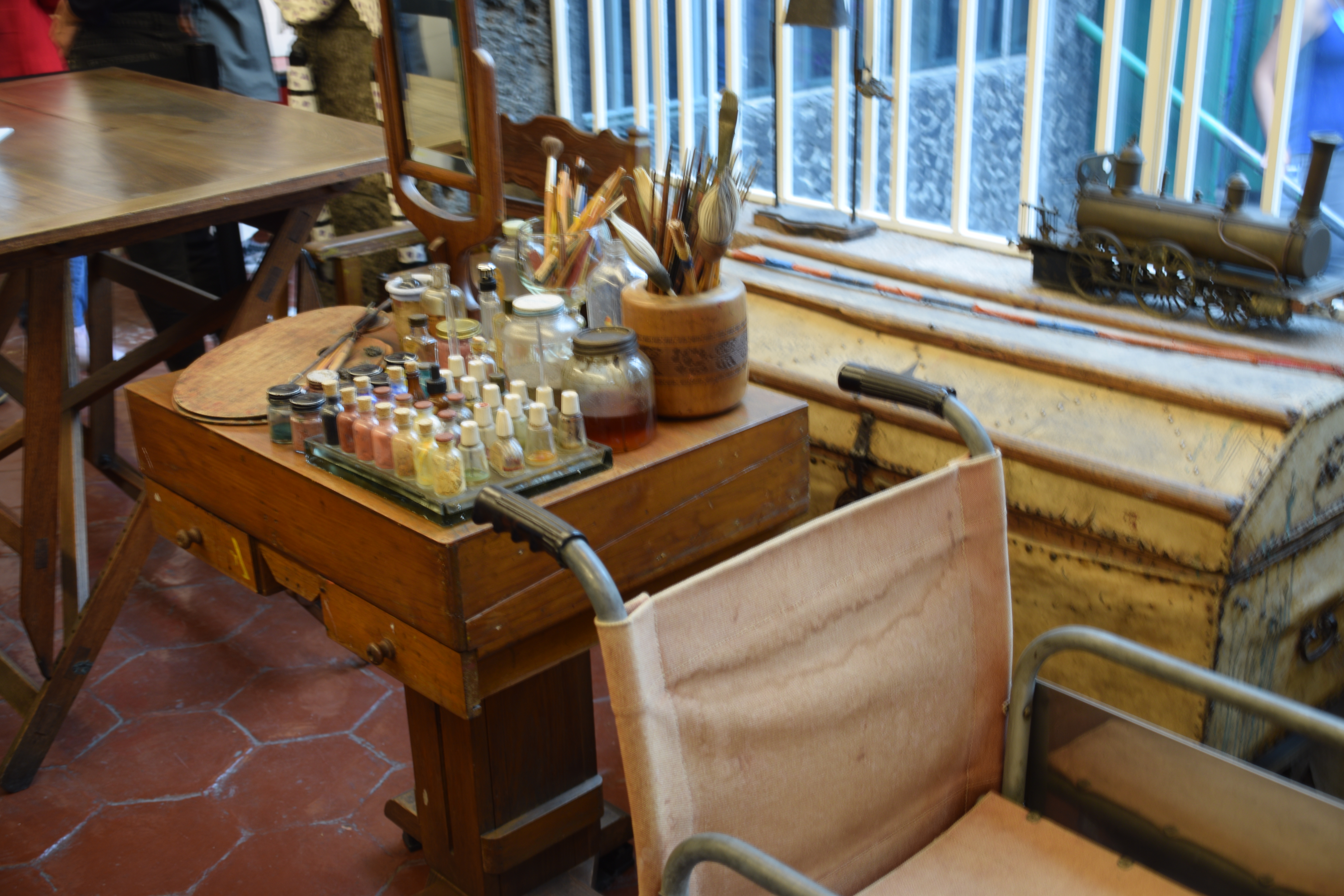 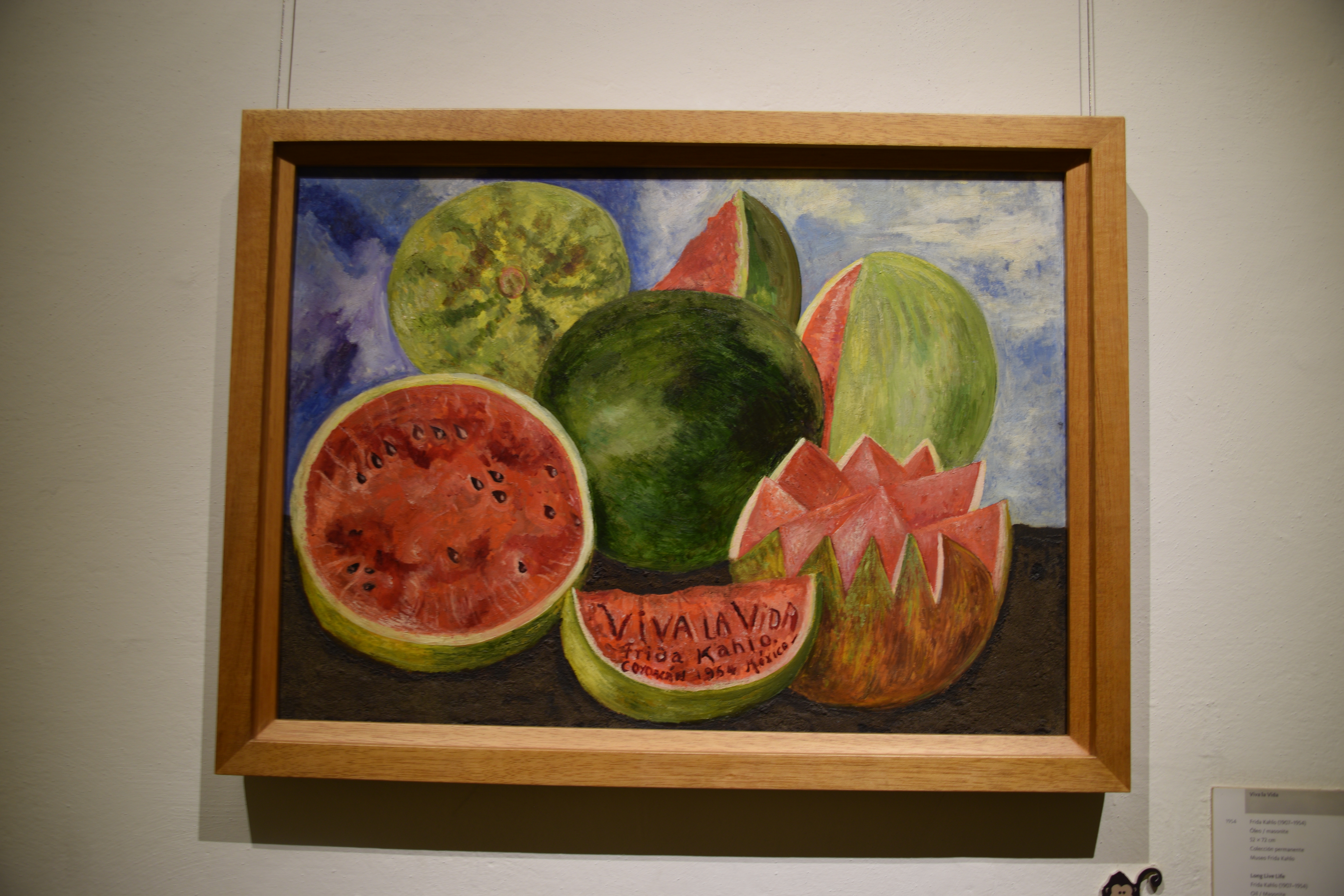 Entrance – Free (will need to hand over ID)

Entrance – Free (will need to hand over ID)