There was once a clergyman who was ‘smitten with the beauty of death’.   He jumped into the Wilmington River,  committing suicide,  with the hopes of being buried in Bonaventure.   He was convinced that only here,  among the stunning monuments and obelisks,  could he rest in peace for eternity.

Originally part of a plantation,  Bonaventure is a classic Victorian Cemetery.    Victorians were probably the first to romanticize death and so cemeteries were no longer places of sadness.   They began to look like parks,  with curved paths,  lots of trees and open grassy areas.  They became not only places of rest for the dead but also places of relaxation for the living.   It was fashionable in those days for families to come and spend the day in Bonaventure,  enjoying picnics and sporting events etc. 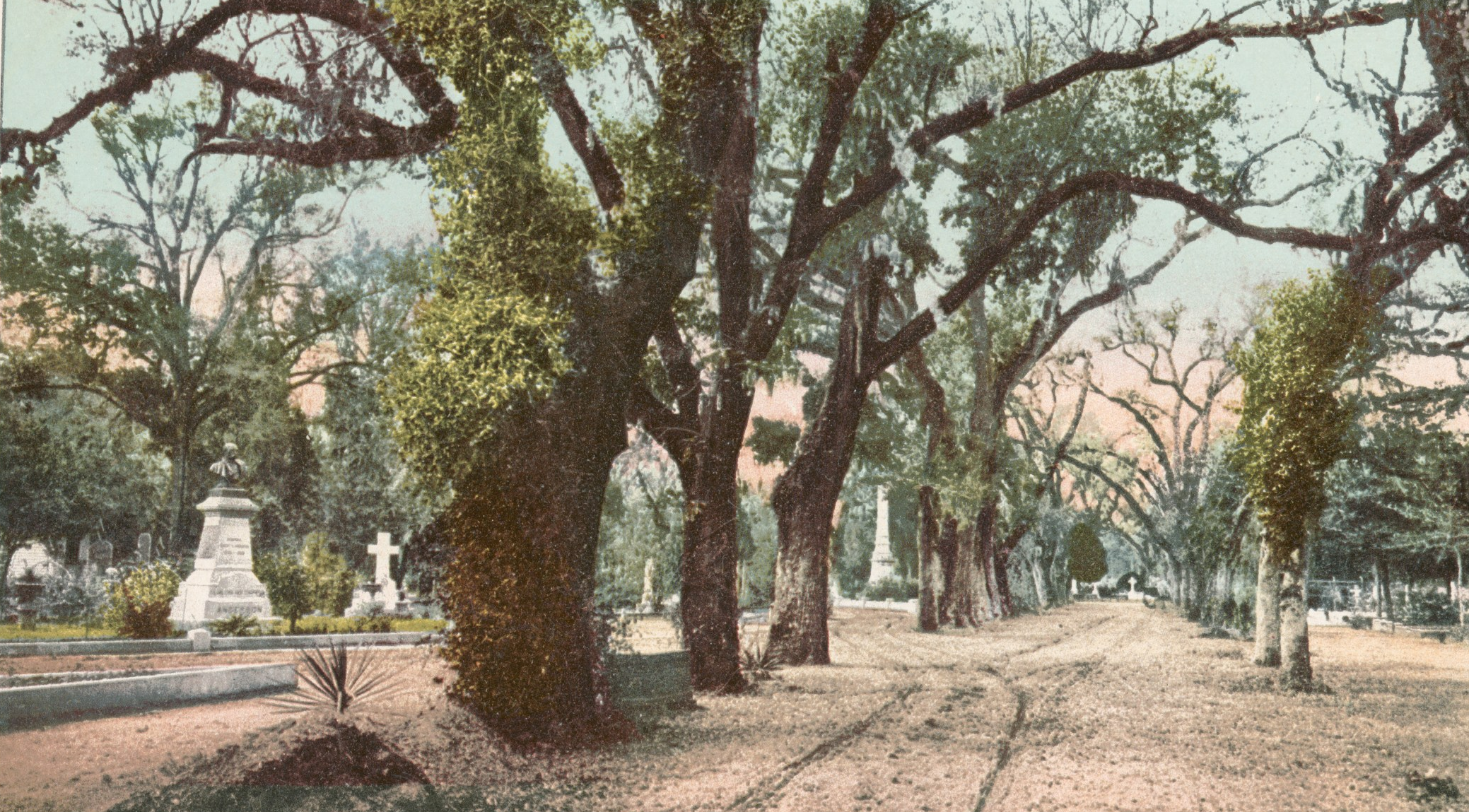 Bonaventure was a sought after place of interment,   especially among those of prominent status and wealth….. 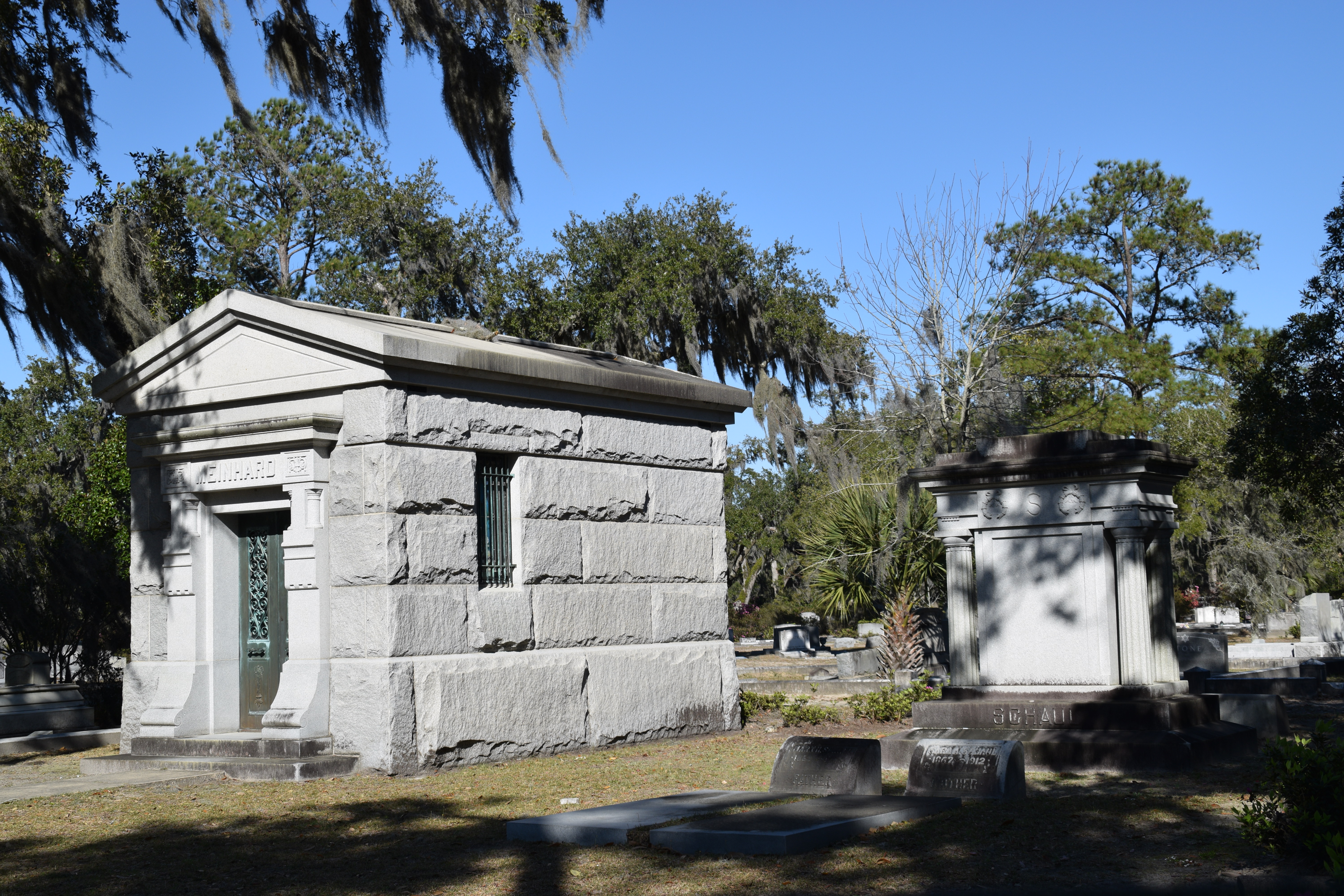 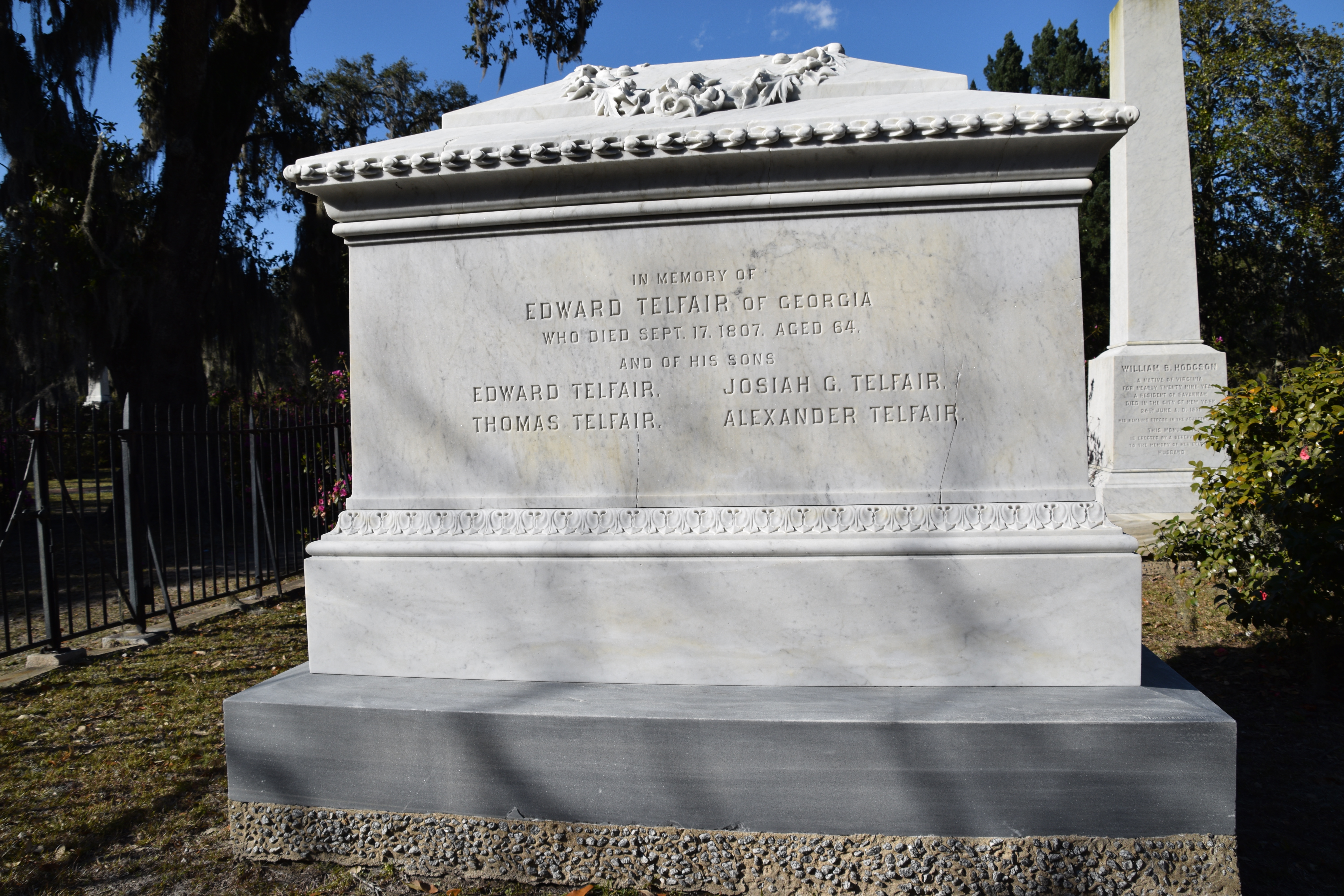 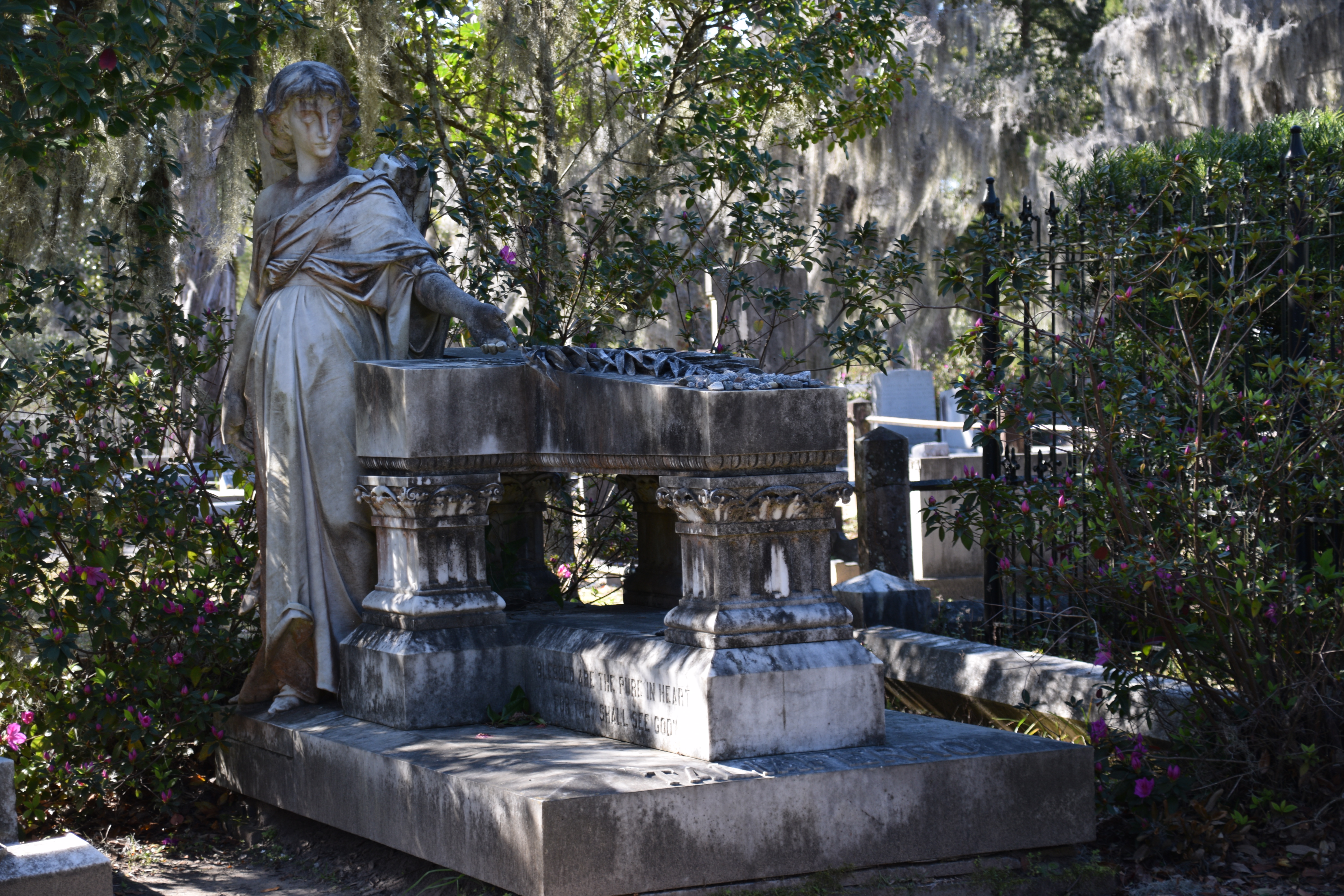 ….although some memorials are more modest. 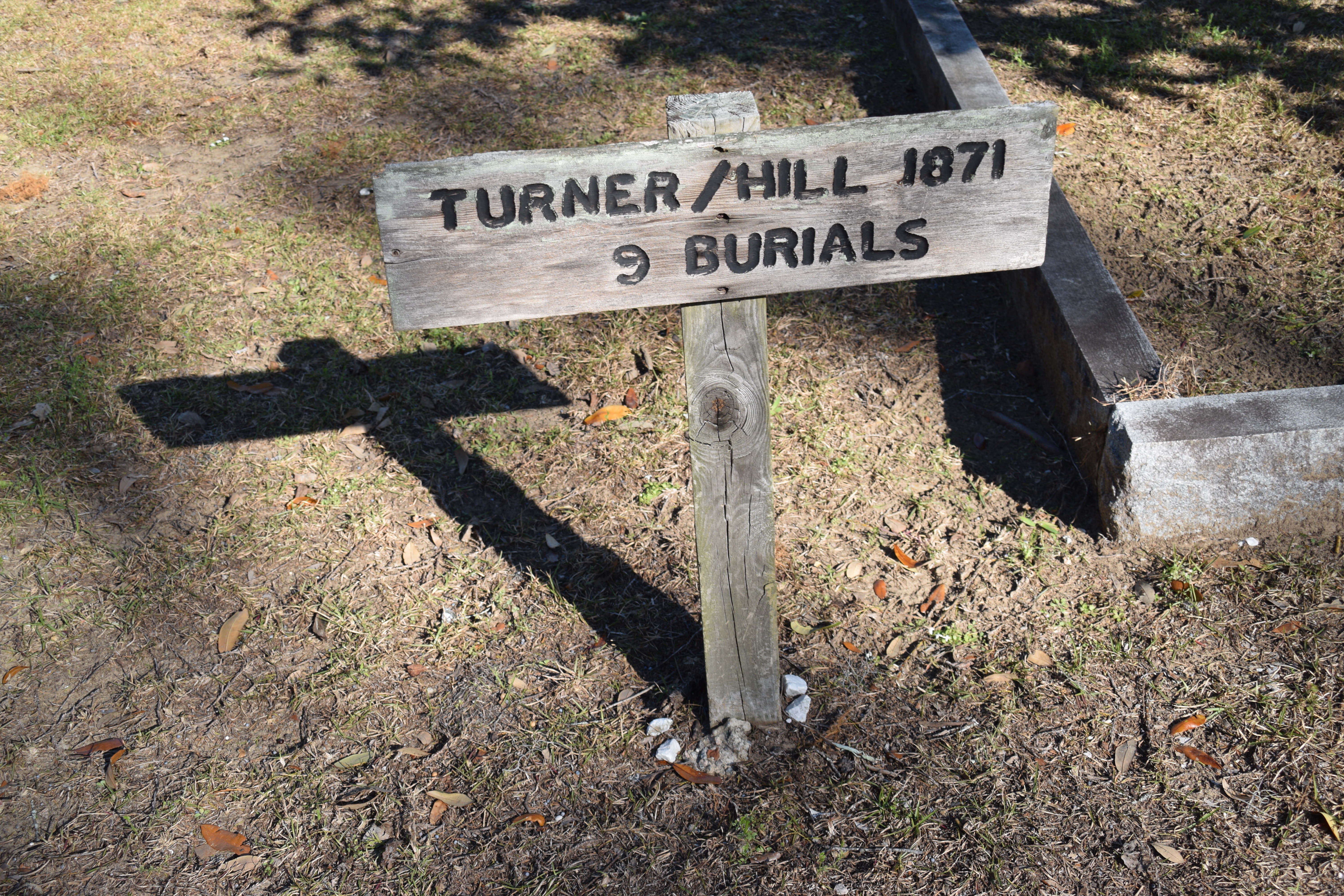 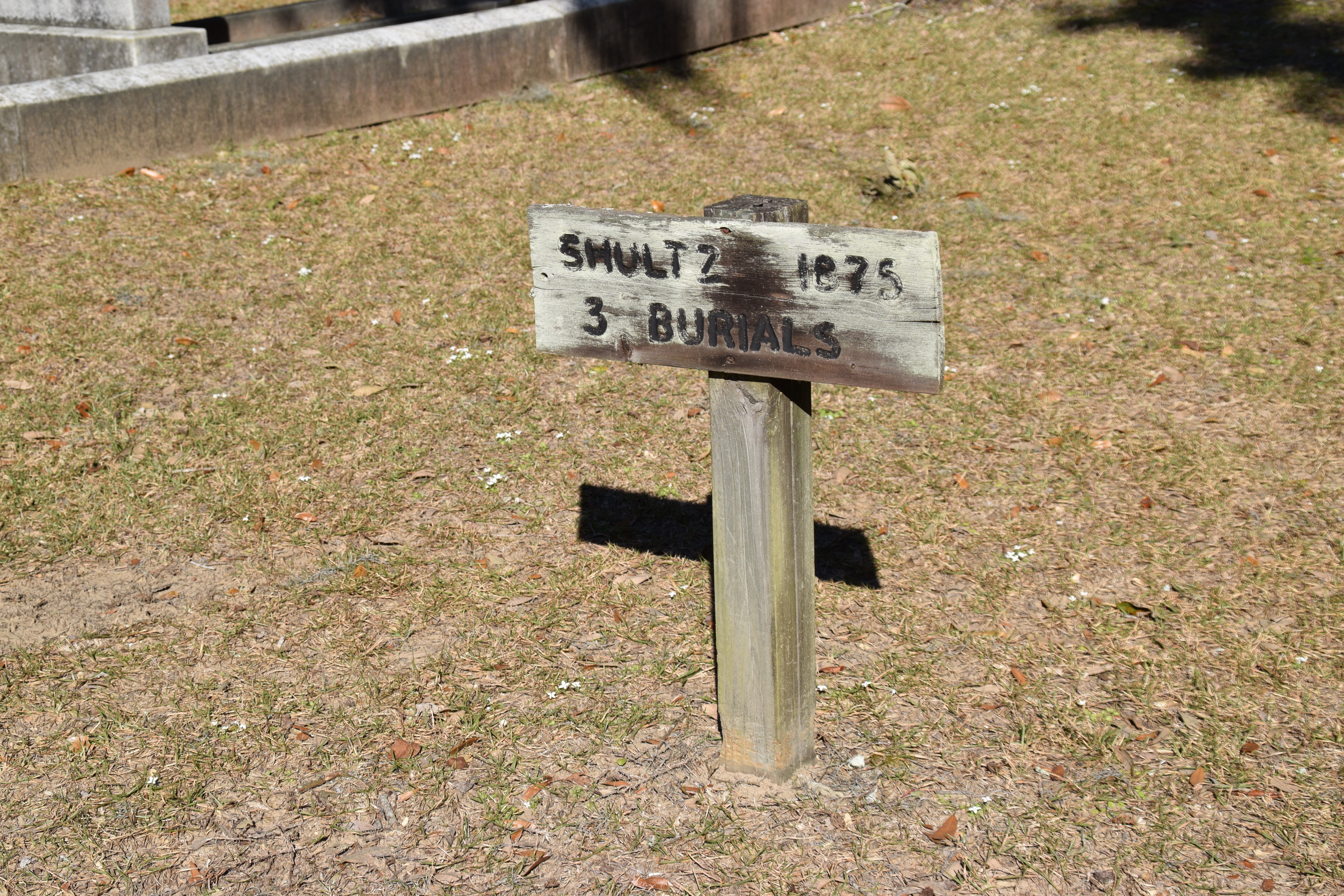 The original plantation owners had planted numerous live oaks to grace the property so many trees in the cemetery today are over 250 years old. 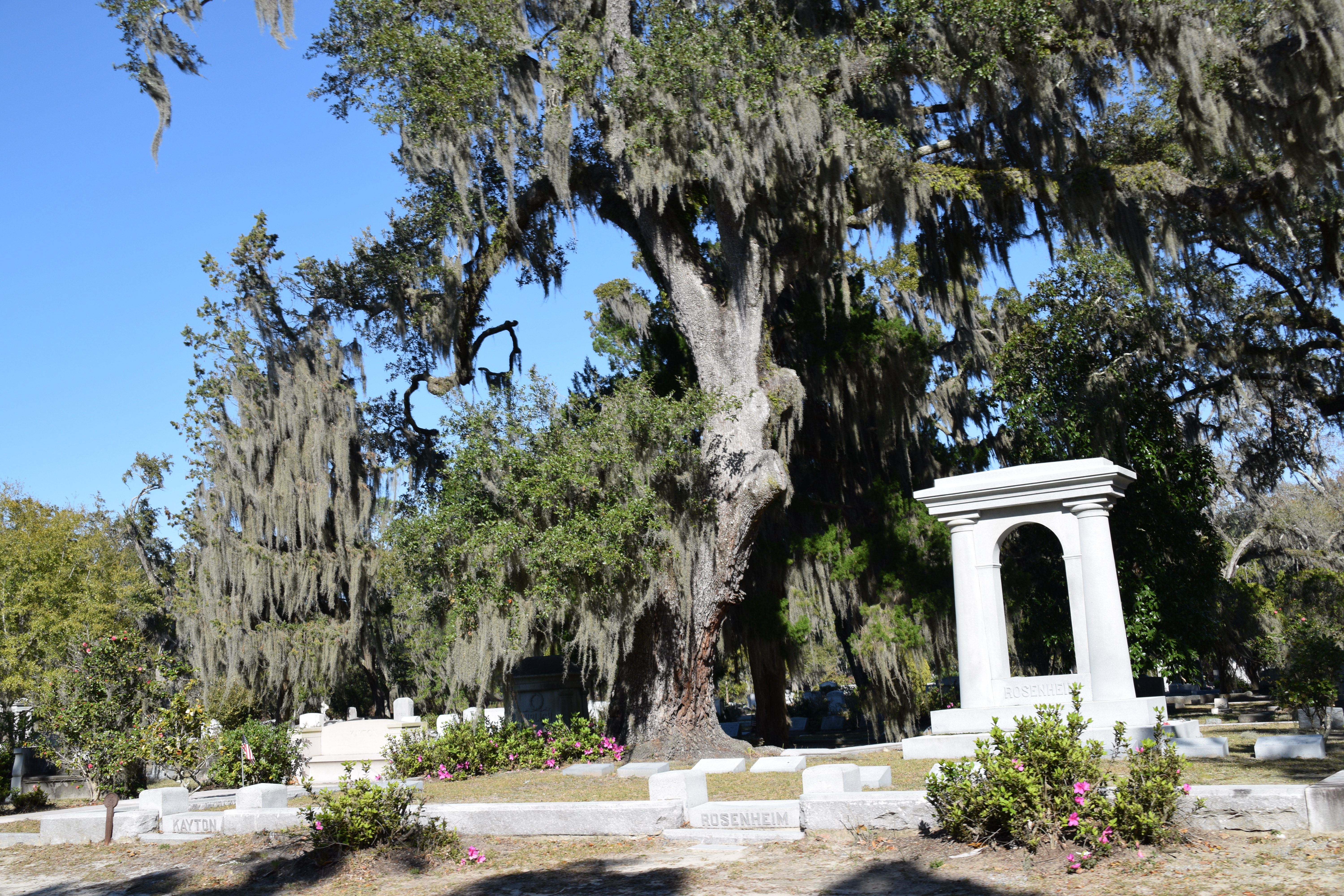 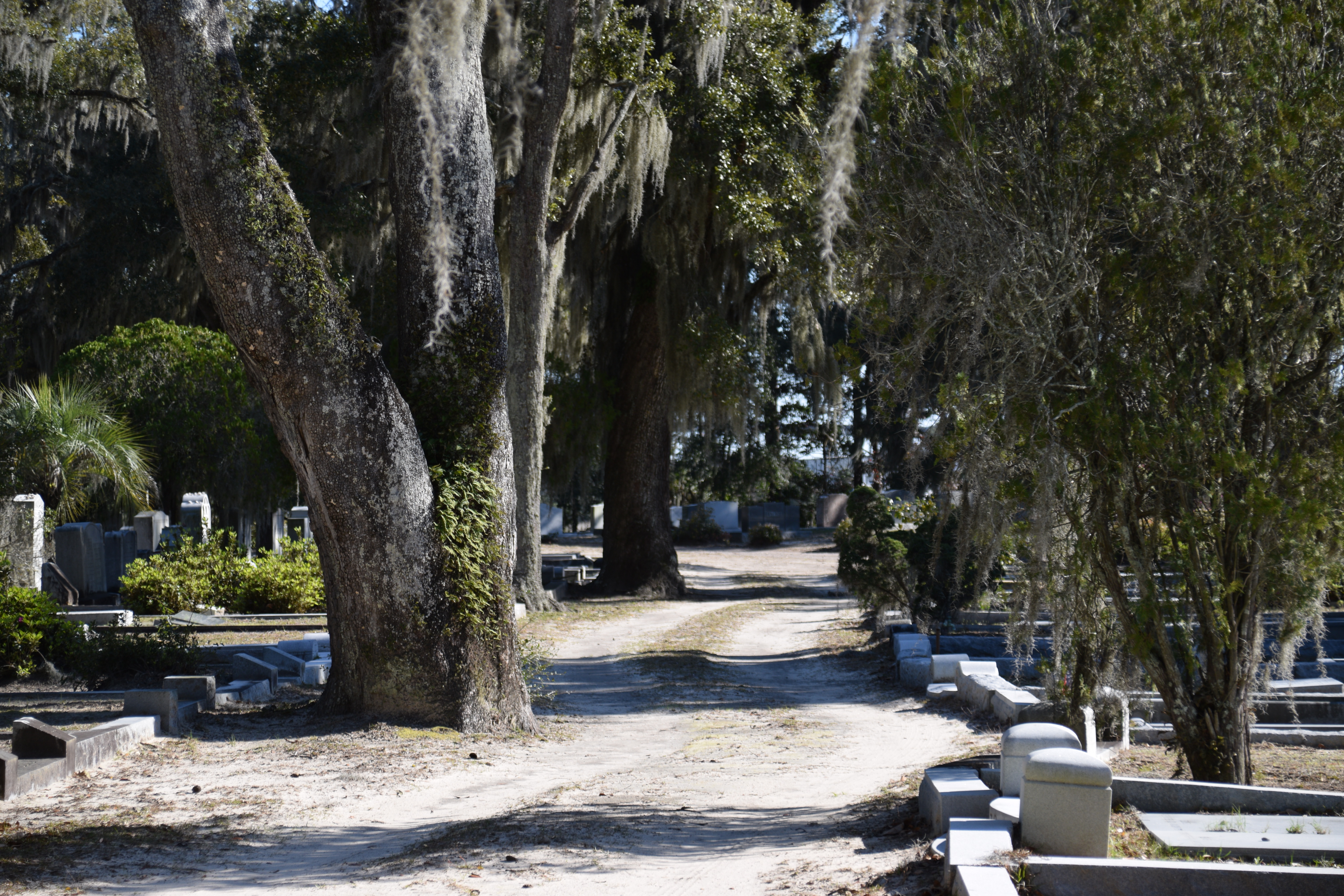 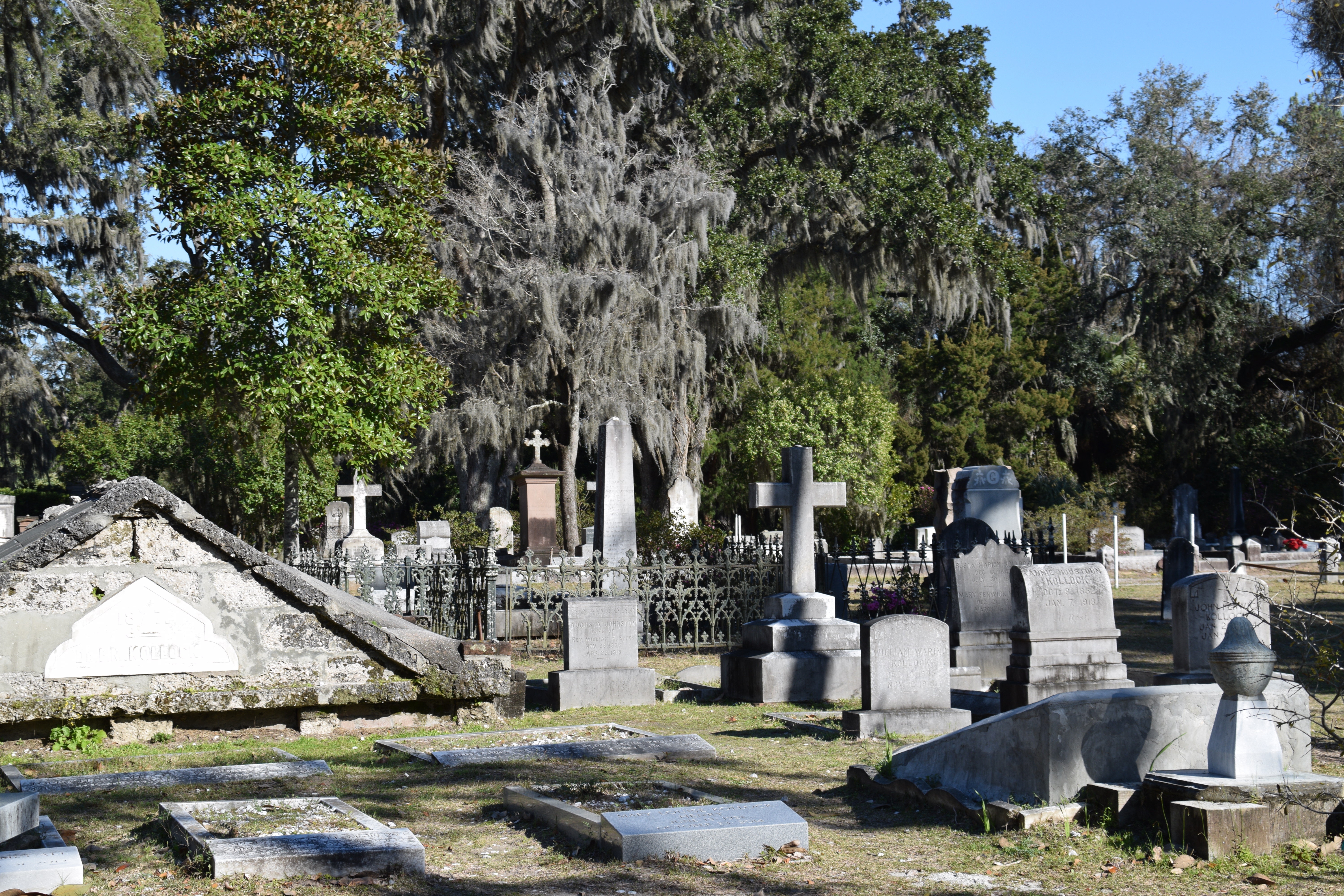 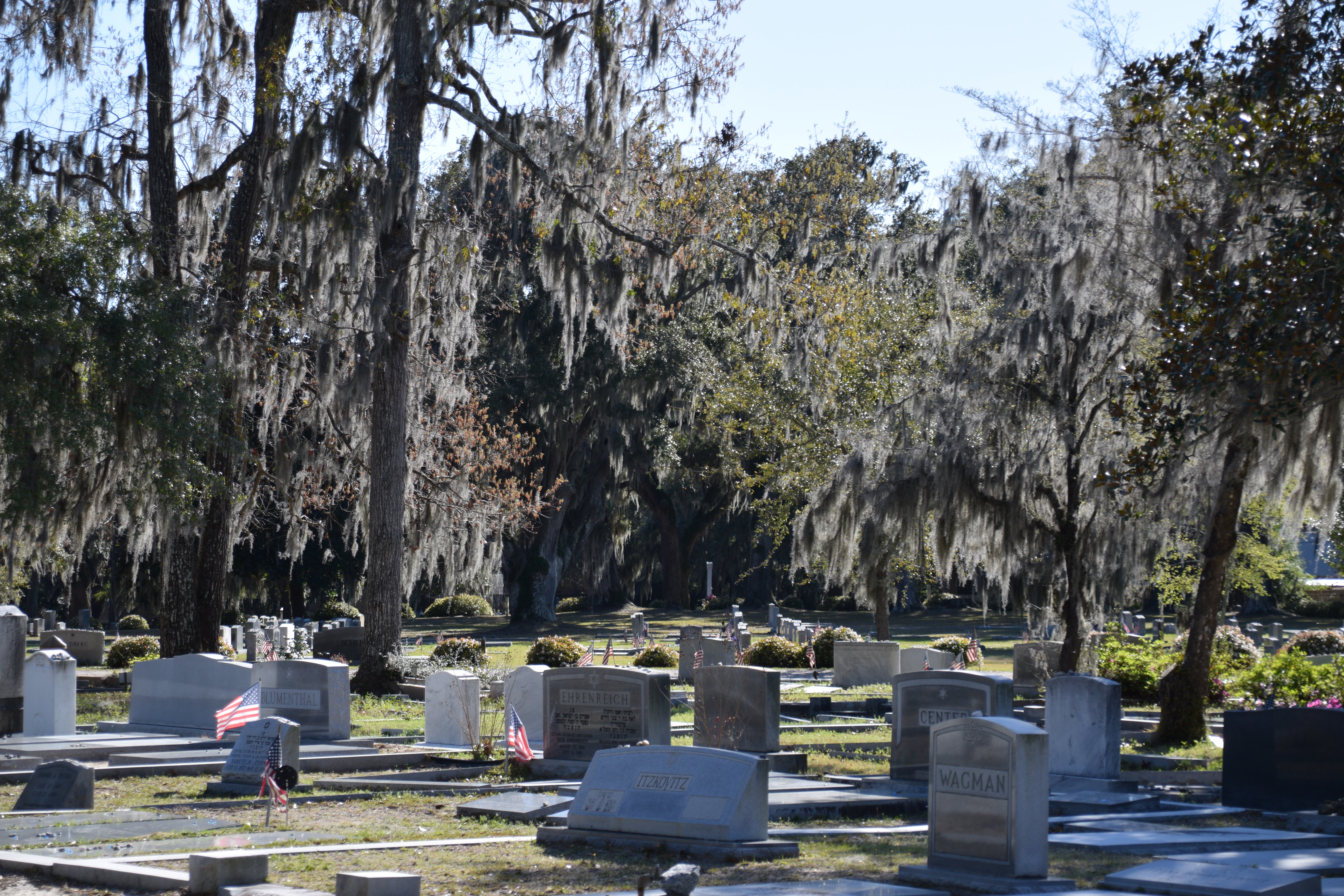 Dripping in Spanish Moss,  the trees provide a welcome shade. 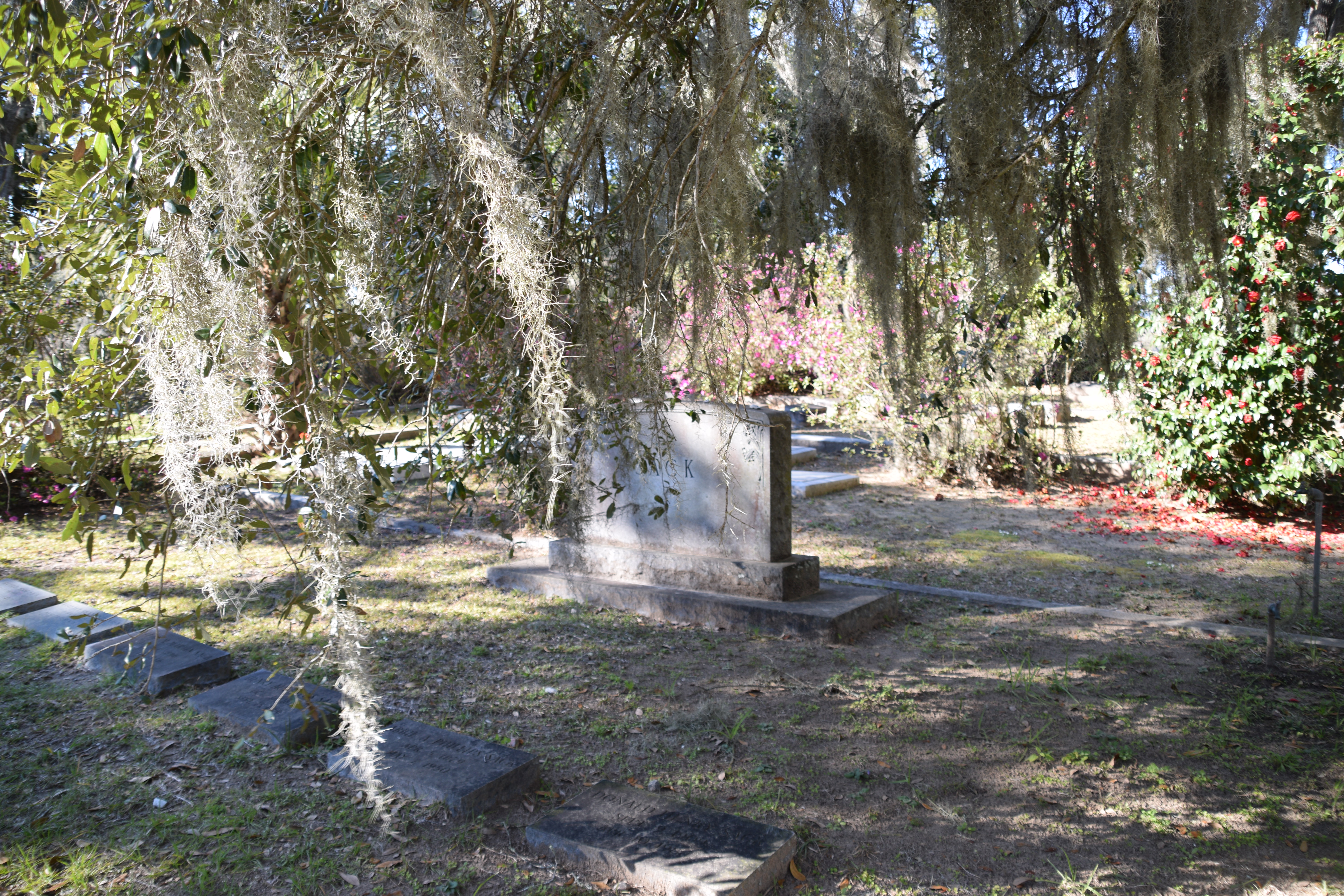 Azaleas and other flowers battle with moss to bring splashes of colour to the pathways. 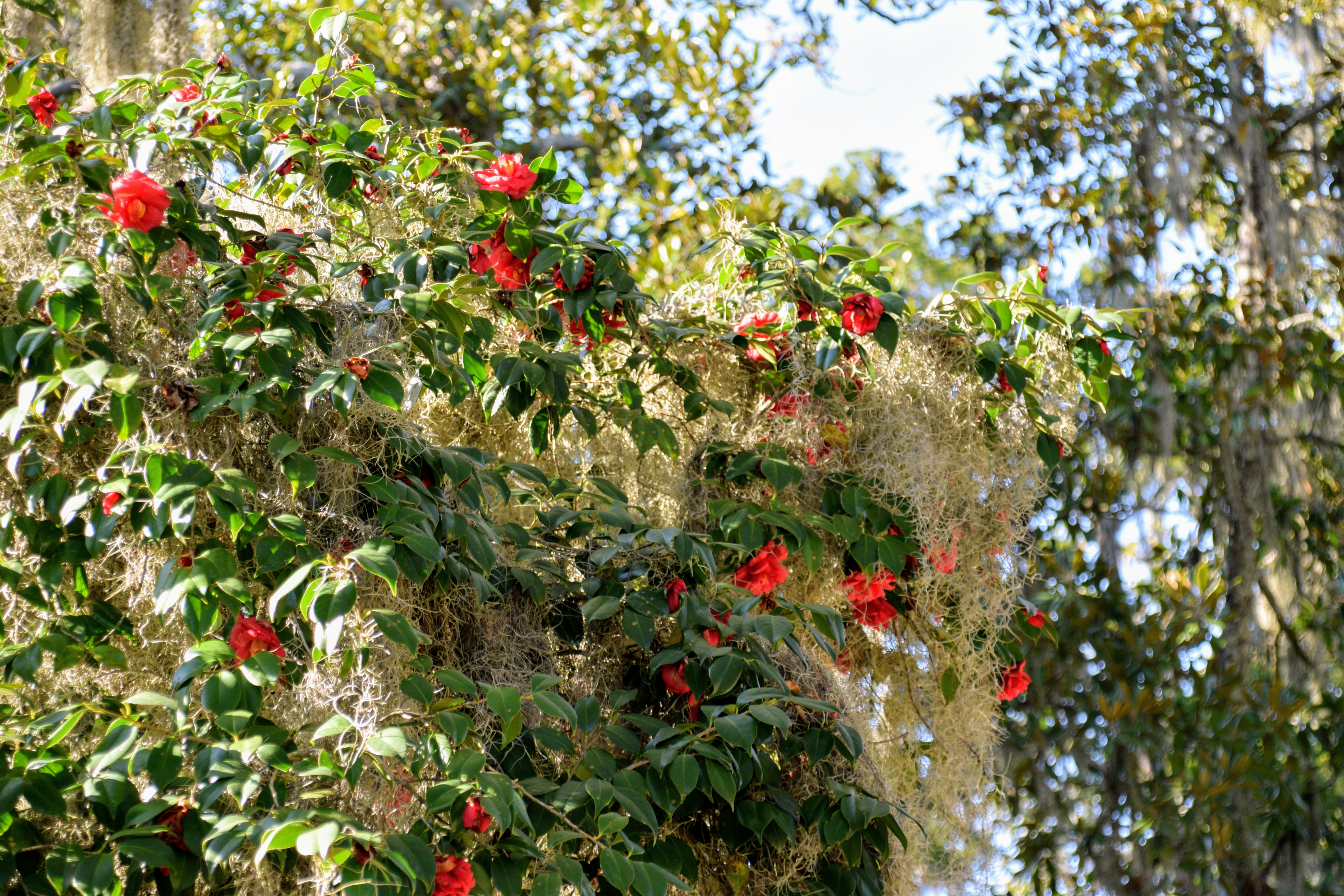 Empty ‘beds’ were commonly used as grave markers,  the size usually representing the age of the person interred.   A double bed marks the grave of a married couple,  while the small beds mark those of children. 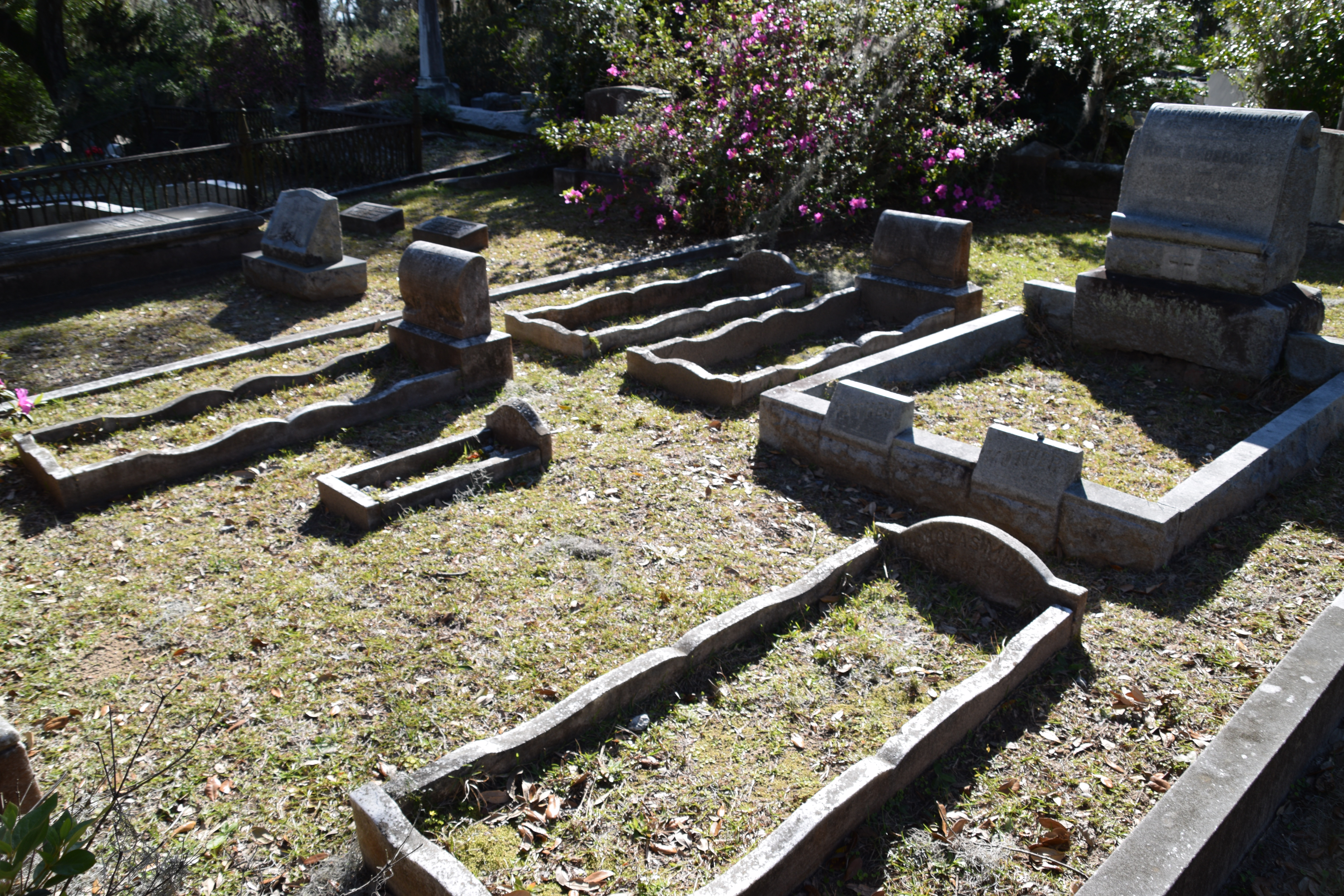 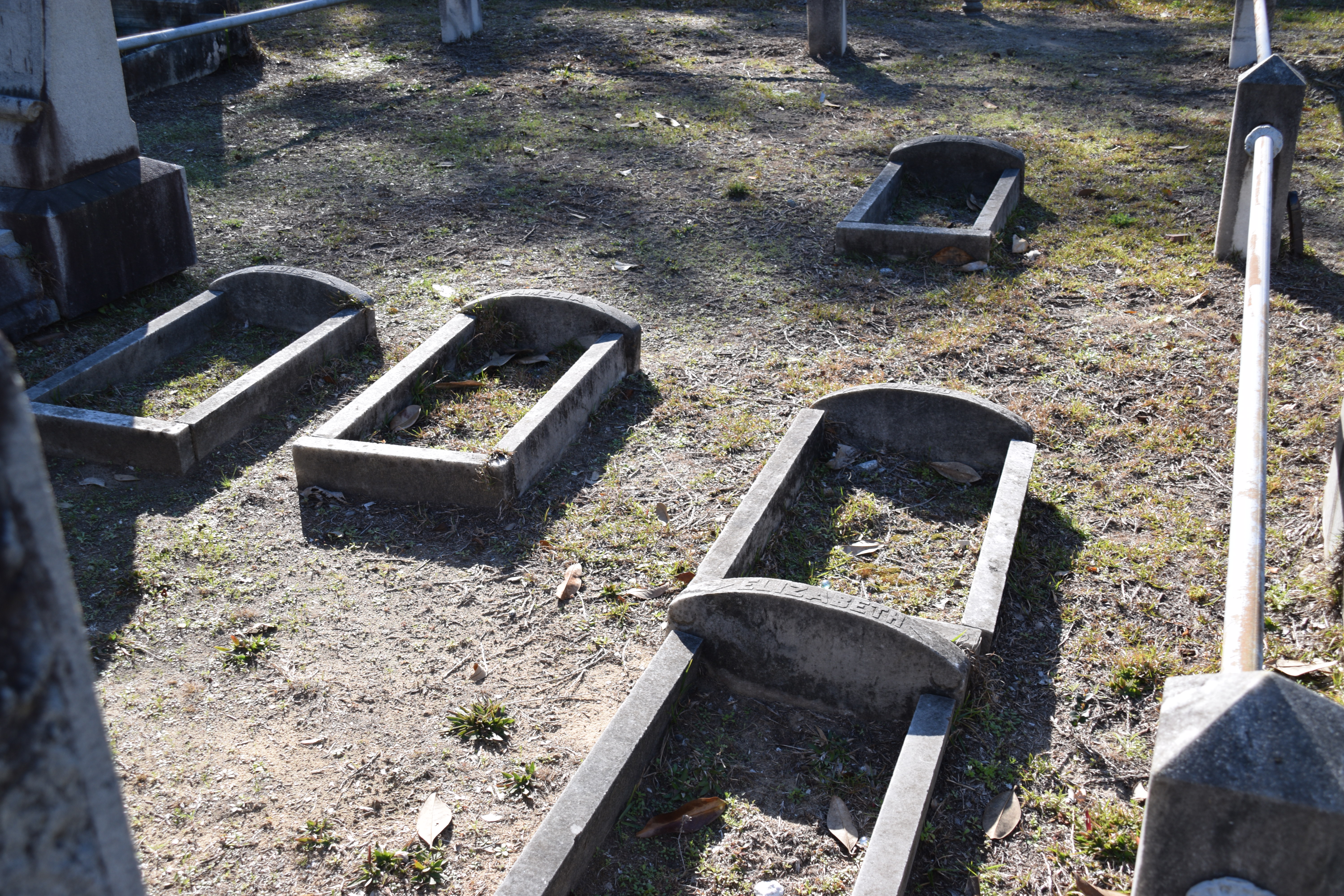 Iron was seen as a boundary for keeping the spirits of the dead in as well as keeping  evil spirits away from them. 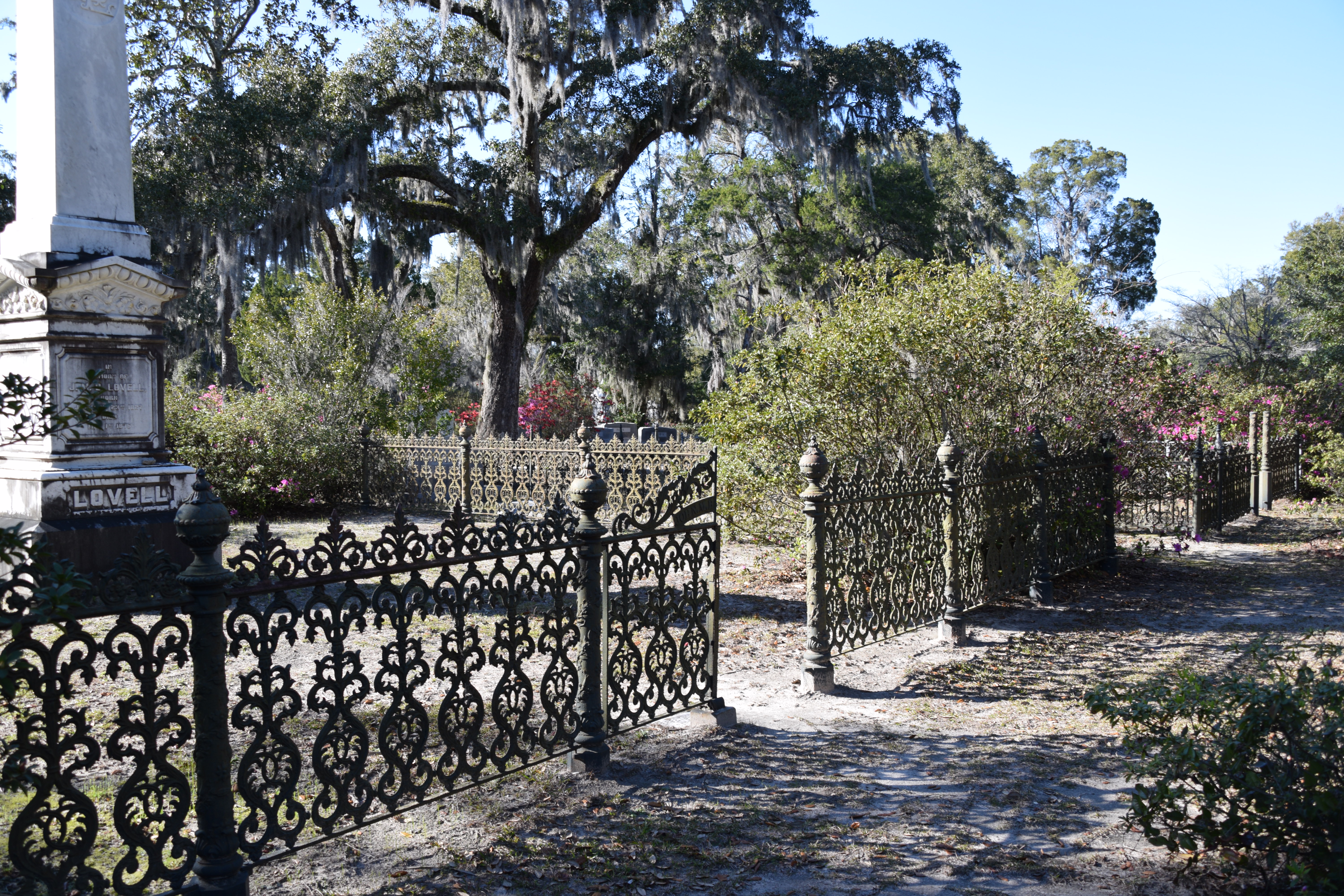 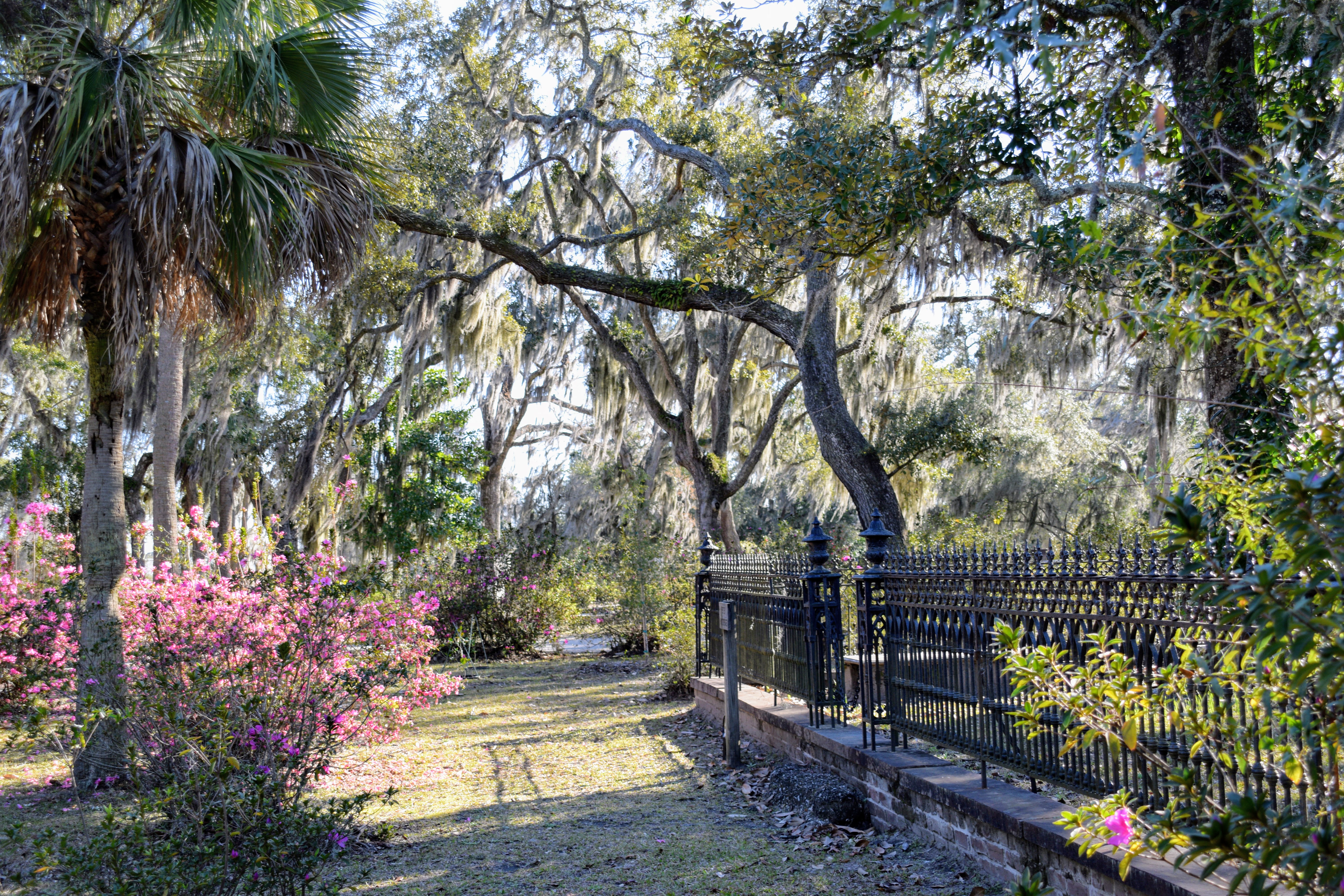 Saved by the Bell!

People were occasionally pronounced dead in error and buried alive!  ( Proof?  Graves at the time were often exhumed and moved for various reasons.   There might be evidence of broken fingers,  or scratched wood where the ‘deceased’ attempted to escape!).   Thus, the bell system was introduced.   A string was attached to the deceased’s hand which was fed up through the ground and connected to an outside bell.   If the deceased awoke in a panic,  the hand movement would jerk the string and ring the outside bell!

Cemetery employees worked “The Graveyard Shift” throughout the night to listen for “dead ringers.” 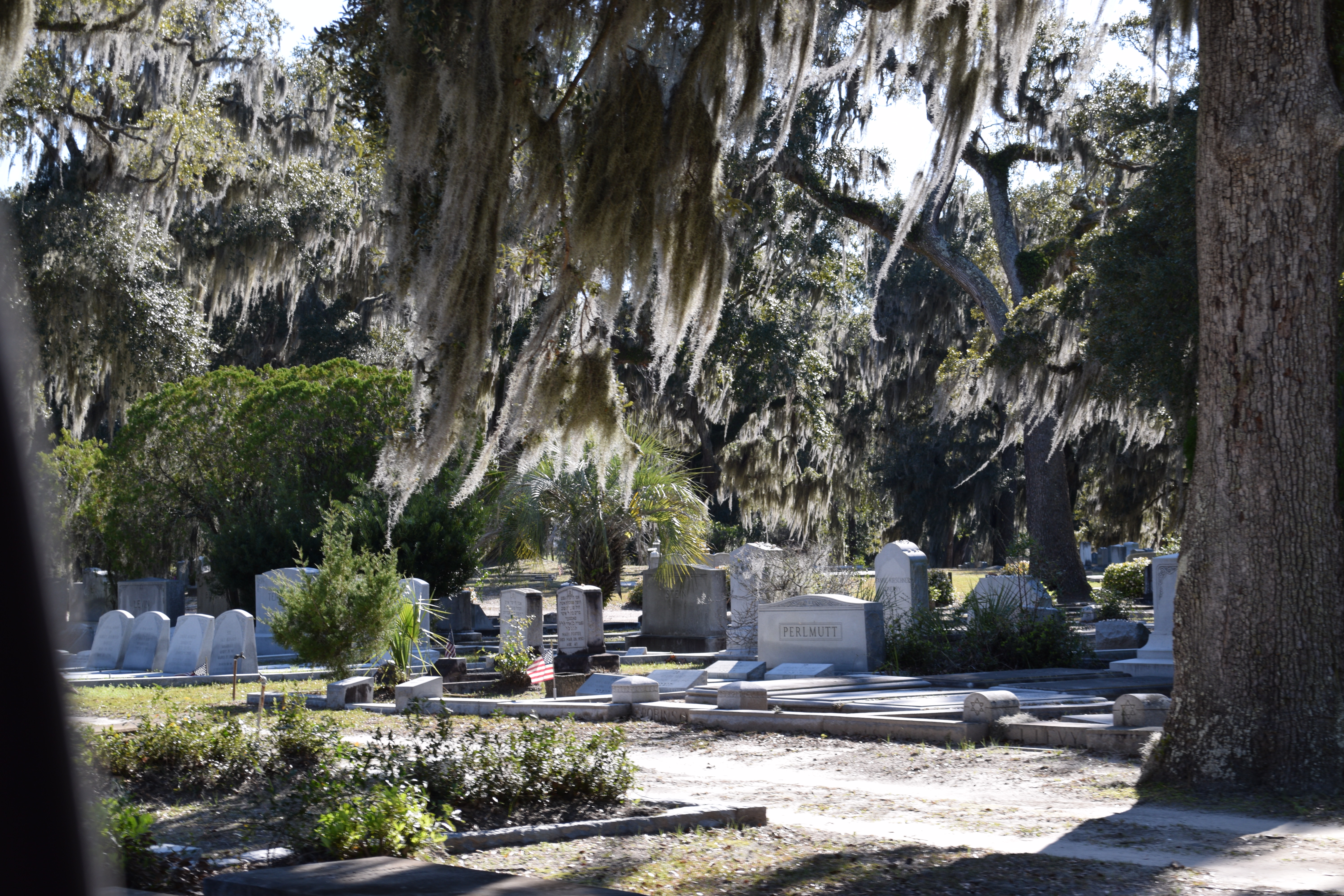 Victorian graves were often marked with a piece of sculpture made in the likeness of the deceased and there are several such pieces in Bonaventure.  The most famous is that of

An only child,  her father was a hotel manager in town where Gracie was a favourite with the guests.  She died of pneumonia aged 6 years.   A stone marker outlines the details of Gracie’s short life,  circumstances of her death and information about the sculpture.   The Iron gate is often adorned with trinkets and small toys

The piece was made by sculptor John Walz.  He created dozens of pieces for the cemetery.   He was buried here himself – without a headstone! 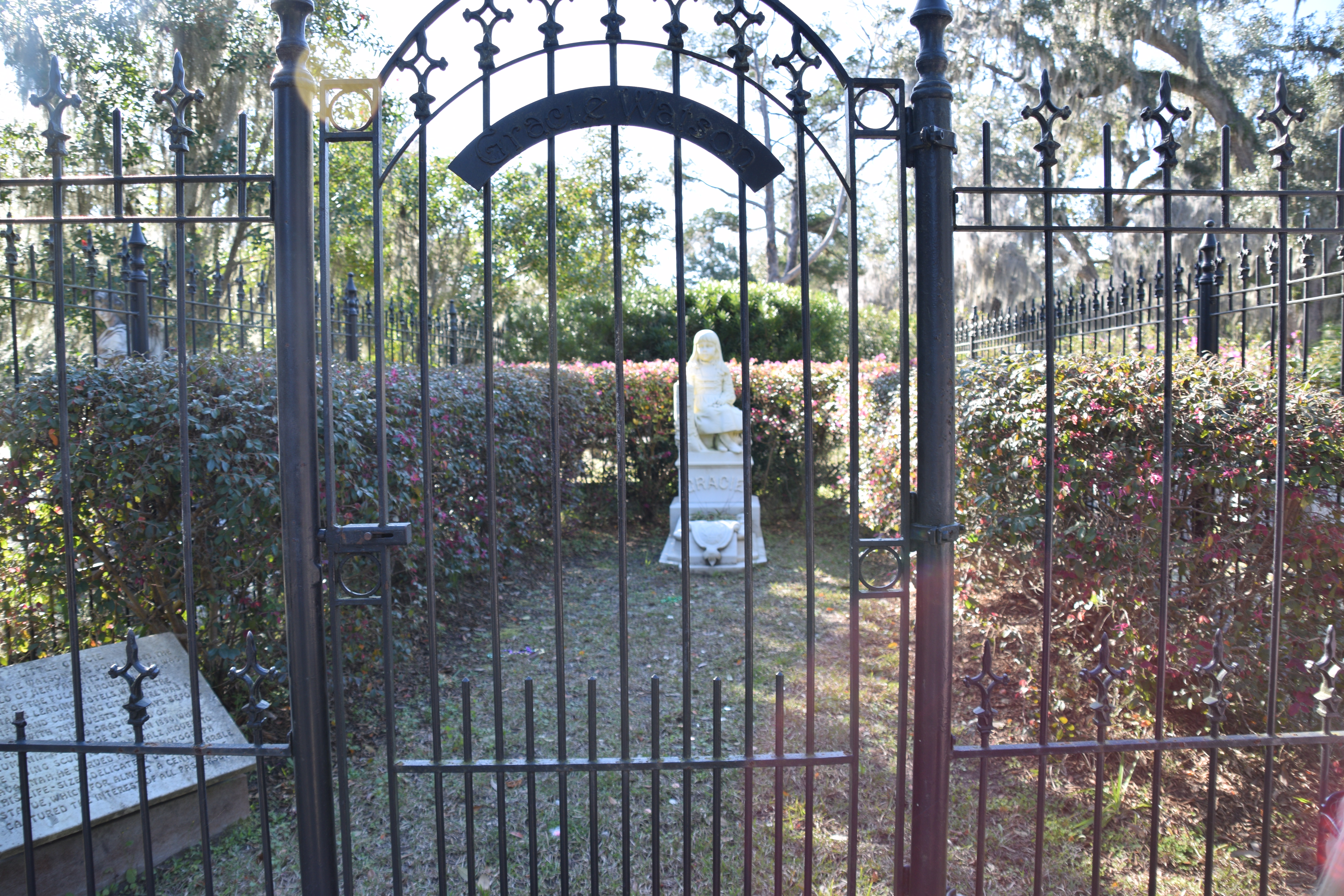 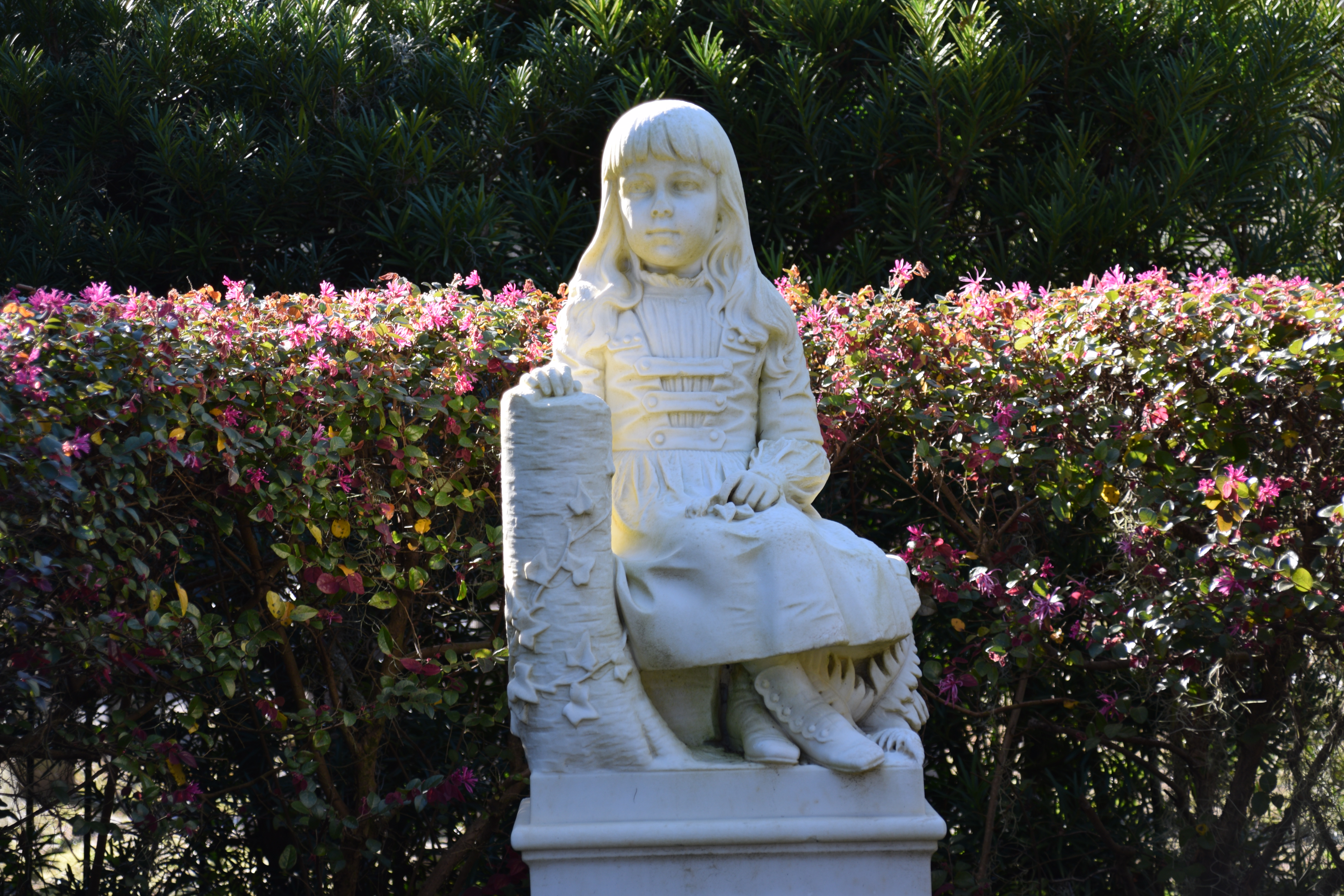 For over 100 years,  Bonaventure has been attracting visitors because of its folklore,  moss-draped trees,  sculptures and architecture.   However,  the cemetery’s tourist traffic increased dramatically with the success of John Berendt’s 1994 best selling novel Midnight in the Garden of Good and Evil.  The statue featured on the cover of the book – Bird Girl – had to be removed for safe keeping and is now on show at the Telfair Academy in town. 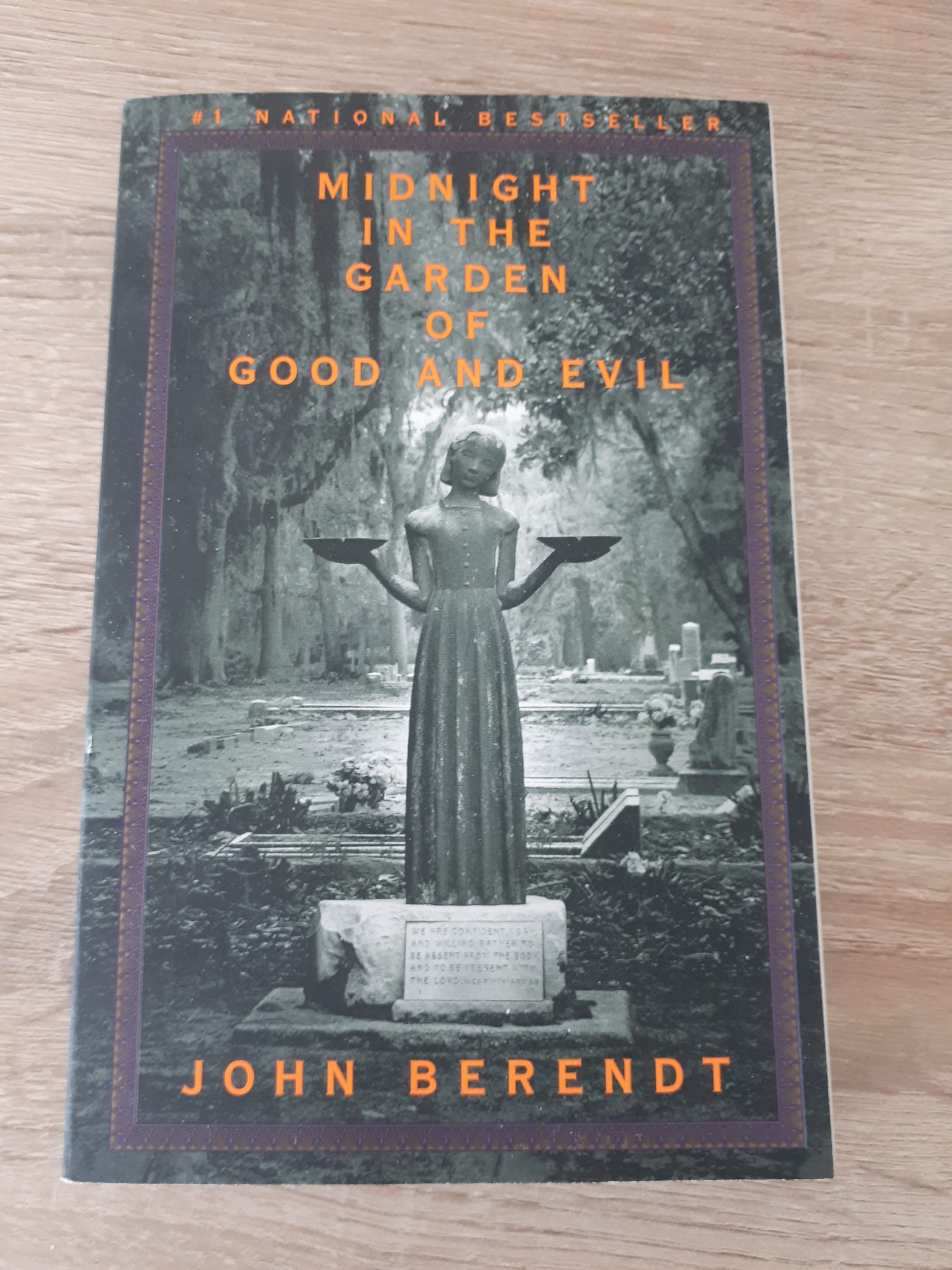 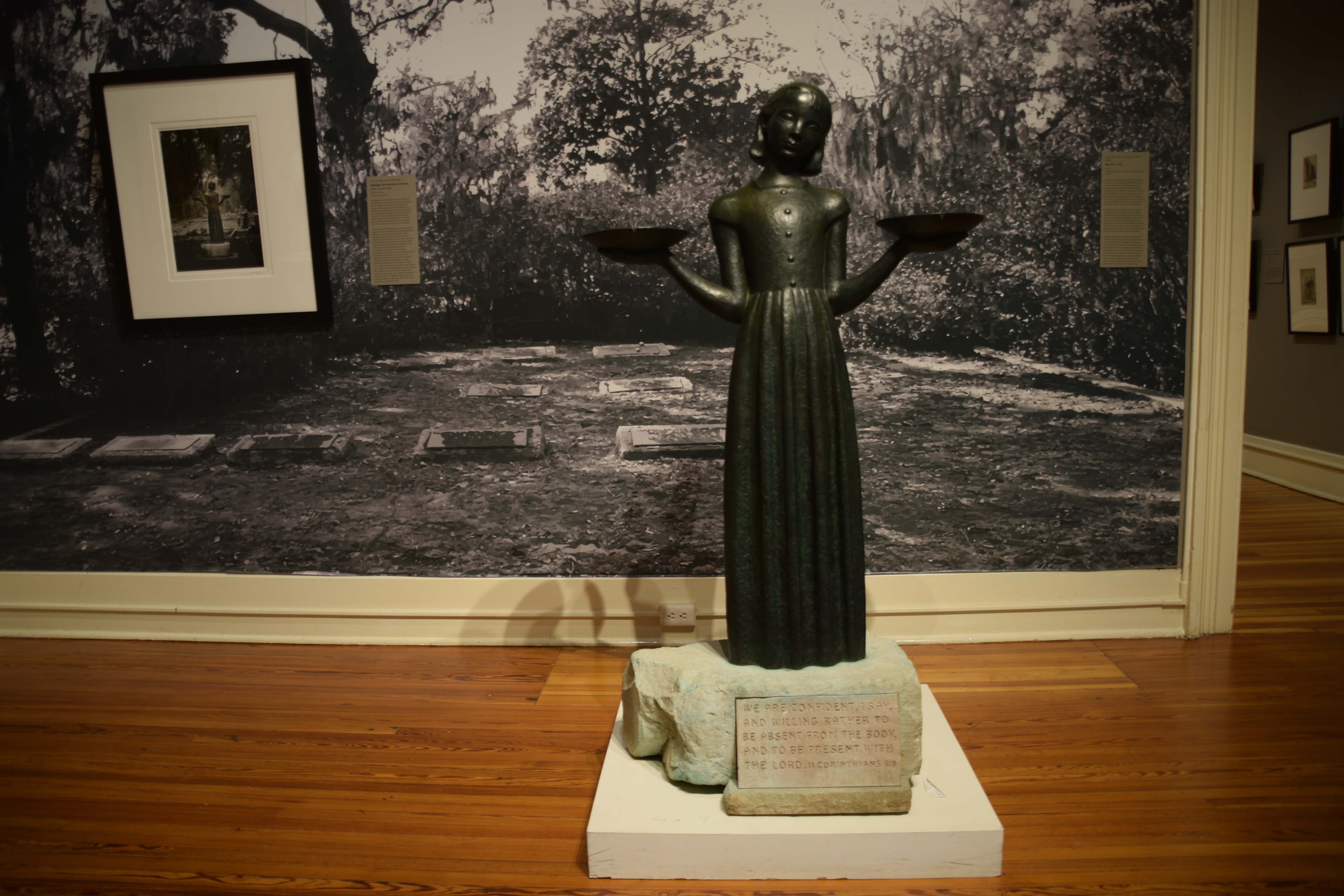 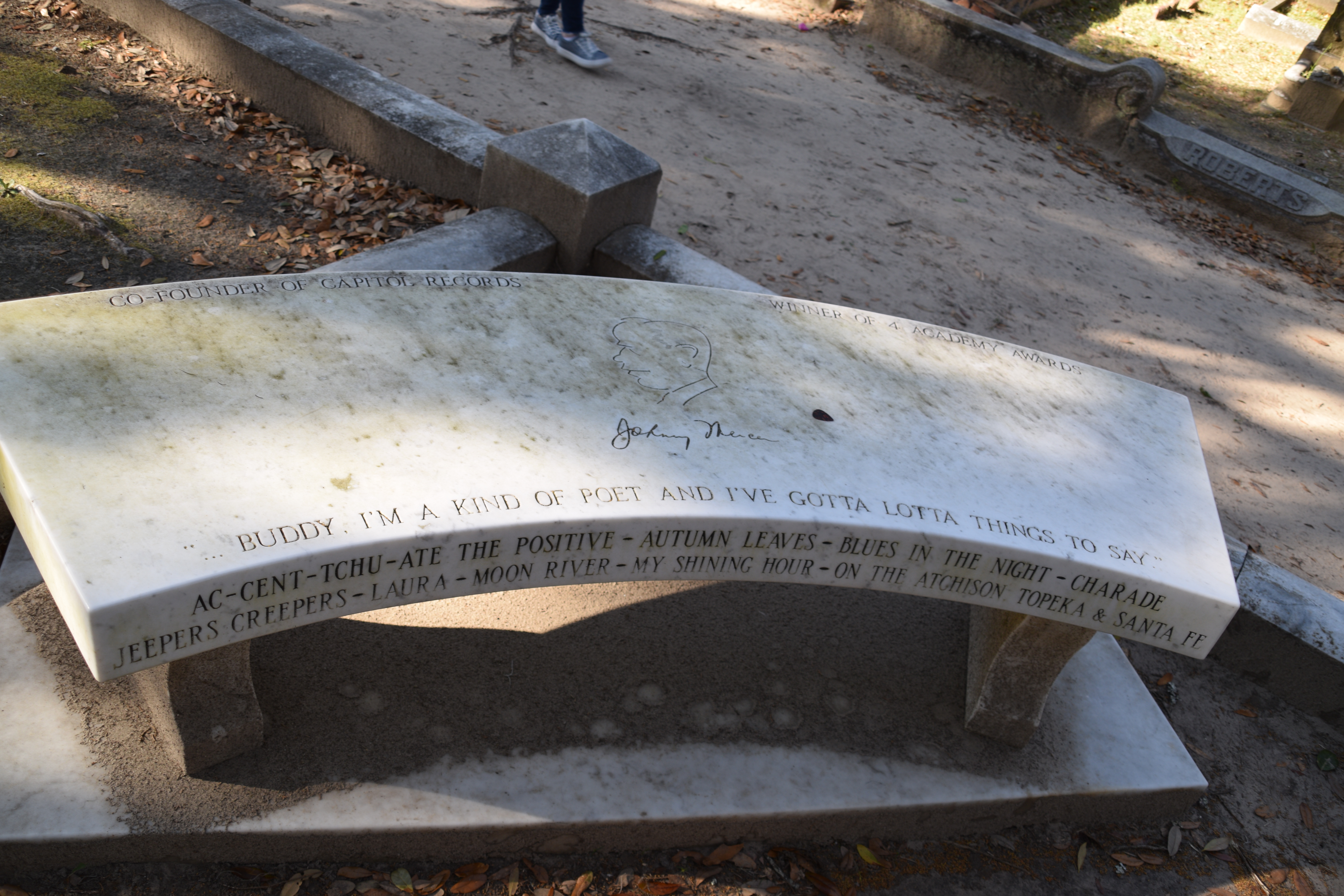 The cemetery lies beside the Wilmington River.  Its claimed that this is the river which inspired Mercer’s ‘Moon River’. 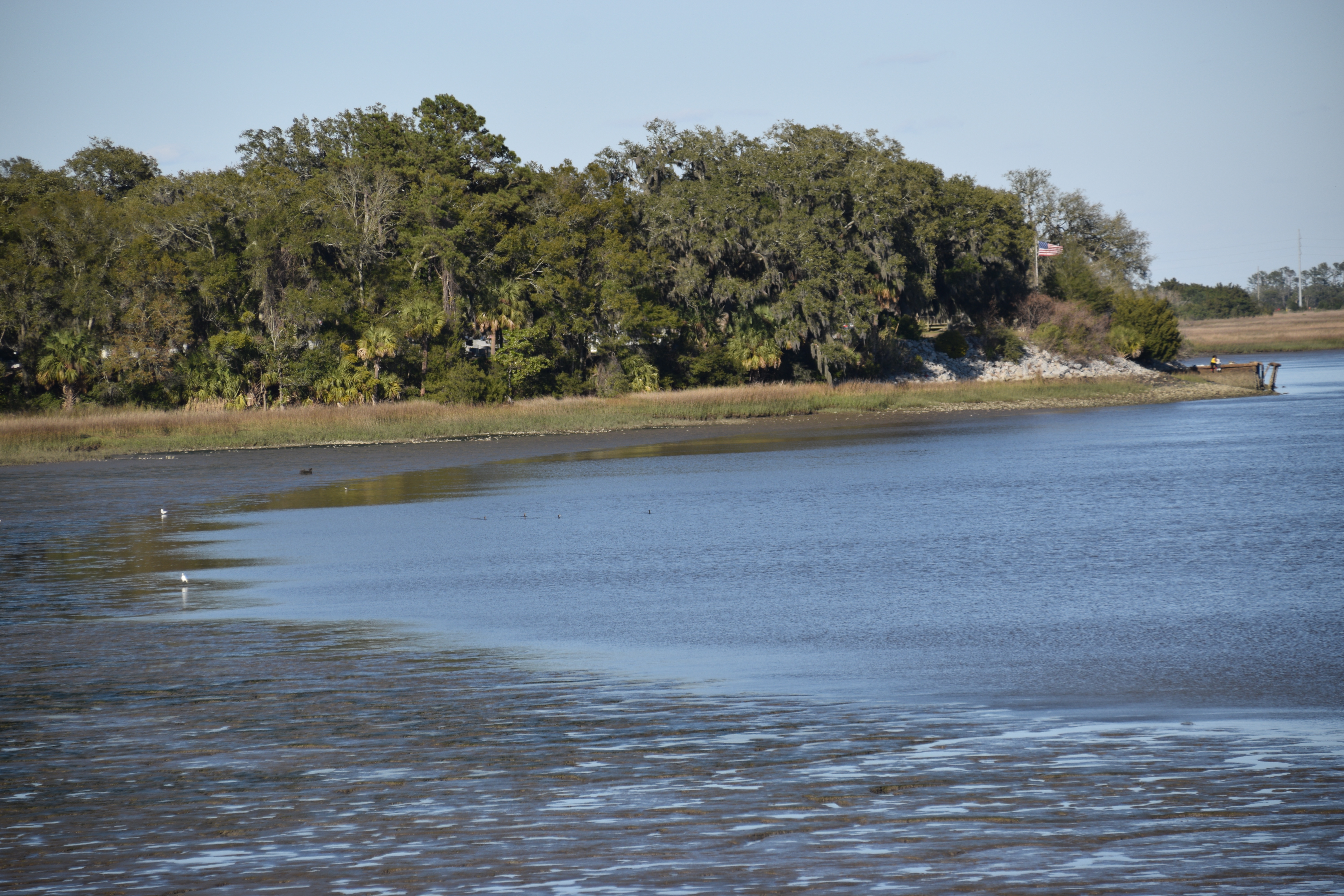 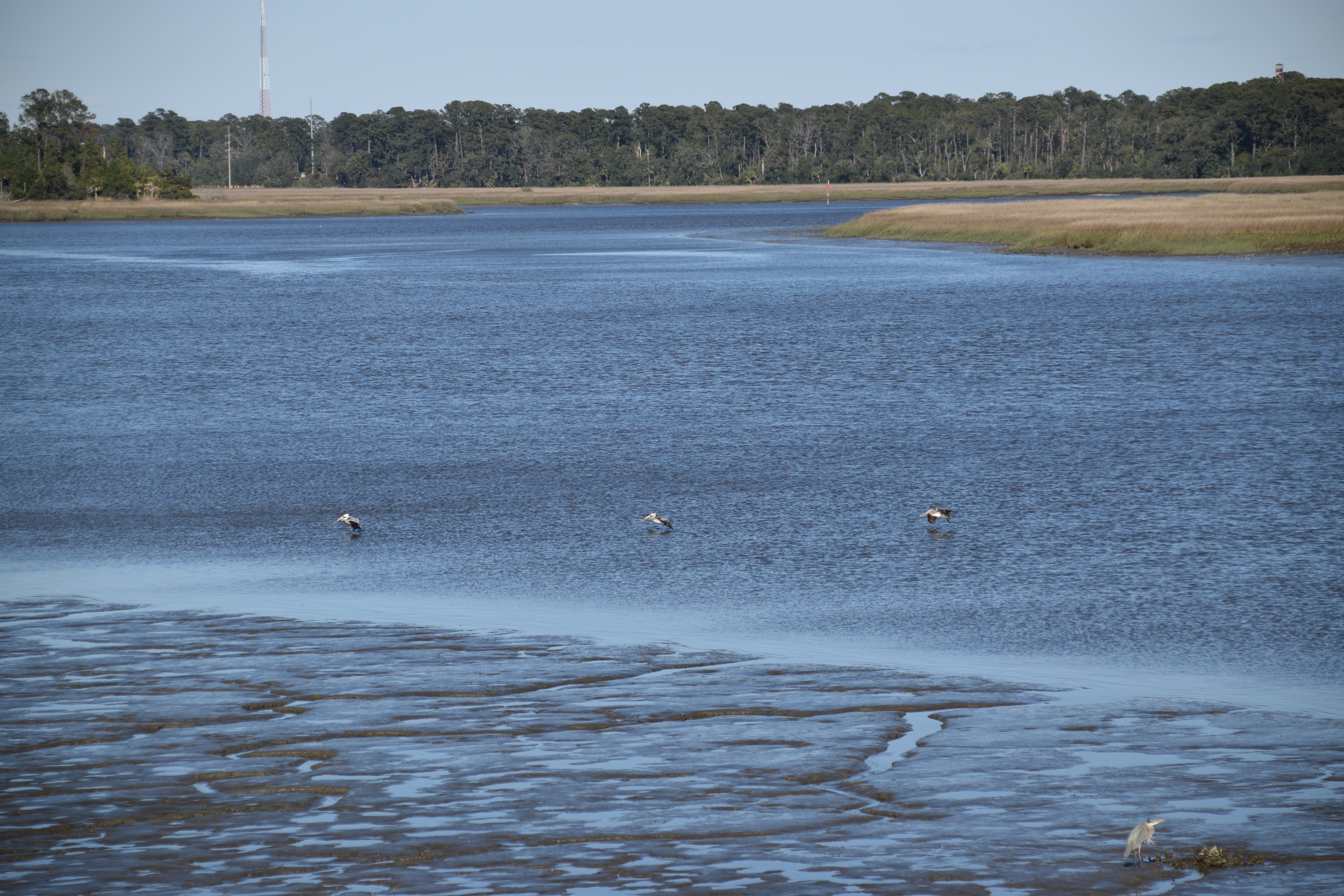 Q.  What is the difference between a graveyard and a cemetery?

A.  A graveyard is usually attached to a church and smaller.  A  cemetery is not affiliated with any particular church and is generally much larger.

The cemetery is located about 5 miles from downtown.

Public transport options are limited, but if you don’t mind some walking, it is feasible to go by bus.   The No.10 bus stops about a half mile from the entrance.

Opens 8am -5pm every day and is free to enter.

Bonaventure Historic Society  offers free guided tours on the second weekend of every month.   It also offers a mobile app for purchase.

Thinking of visiting Savannah?  Have a look at Savannah – a stroll Downtown

16 thoughts on “Savannah – away from Downtown: 1.Bonaventure Cemetery”