Welcome to Rathmichael Wood which,  I’m lucky to say,  is (just about!) within my 2km radius exercise limit.   This is a great place –  nice walks,  wonderful views and a few ancient treasures thrown in for good luck!

We start off on a paved laneway above the village of Shankill.

The route is marked with Dublin Mountain Way signs

The paving quickly gives way to a rough track.

This is the first treat on the route.   The 12th century cross is one of a series of crosses – known locally as the Fassaroe Crosses – all believed to be the work of the same stonemason.  Its thought that the crosses might have marked a route between churches in the locality or perhaps marked the site of another church,  now long gone.  Its an unusual cross in that the crucifixion is depicted on both front and back faces.  Its quite safe just tucked in here at the side of the lane  – no one will dare move it –  a series of misfortunes is said to have befallen a group of men sent to take the cross at the bidding of a local collector of antiquities!

The path splits off into lovely lanes for wandering…

Hmmm…  won’t be too many fitting through here if the lockdown continues!!

As you gradually climb,, you are rewarded with stunning views of the Irish Sea and surrounding landscapes.

There’s the Sugarloaf Mountain in nearby County Wicklow. 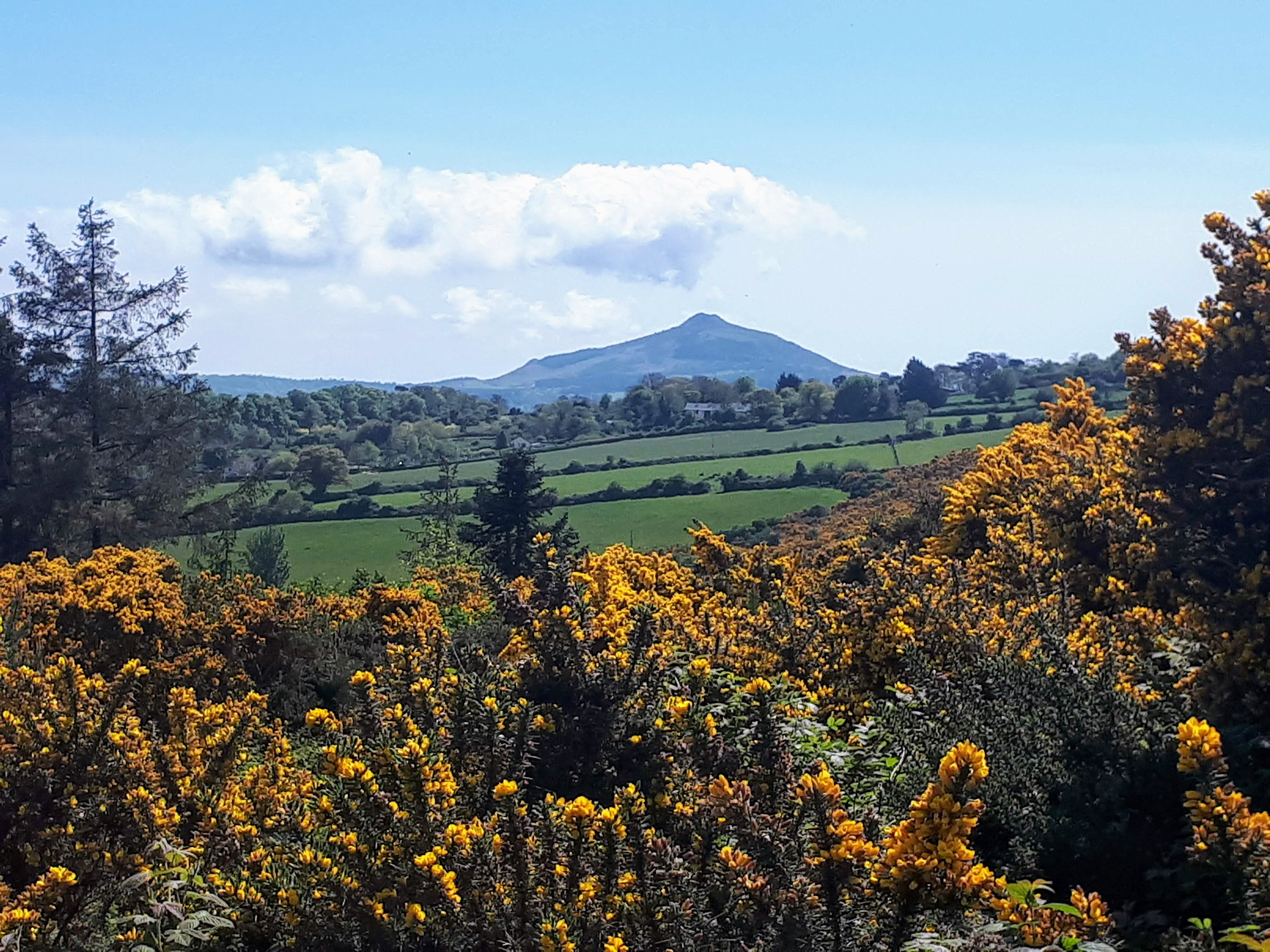 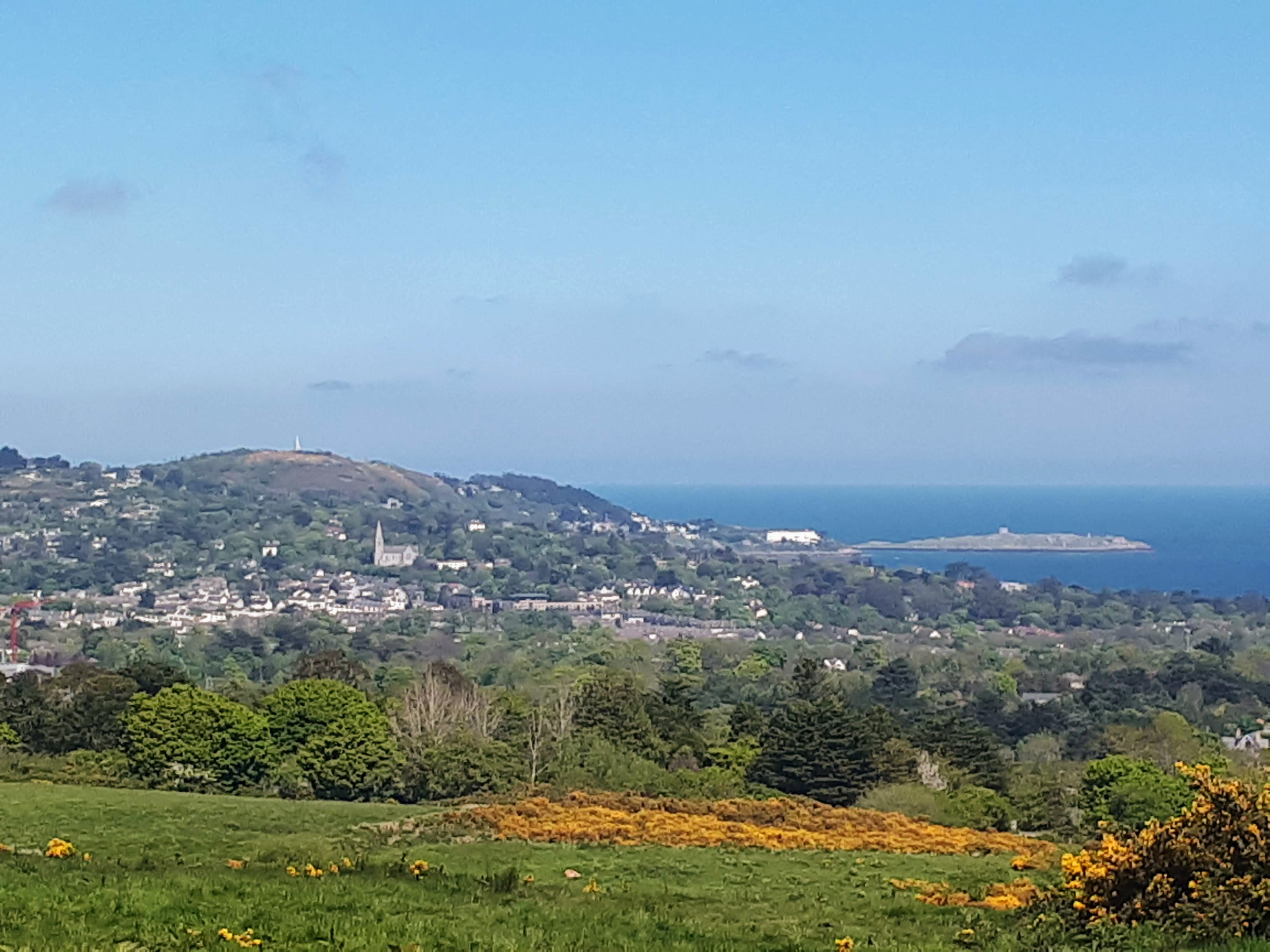 That’s the remains of a 19th century lead mine in the distance. 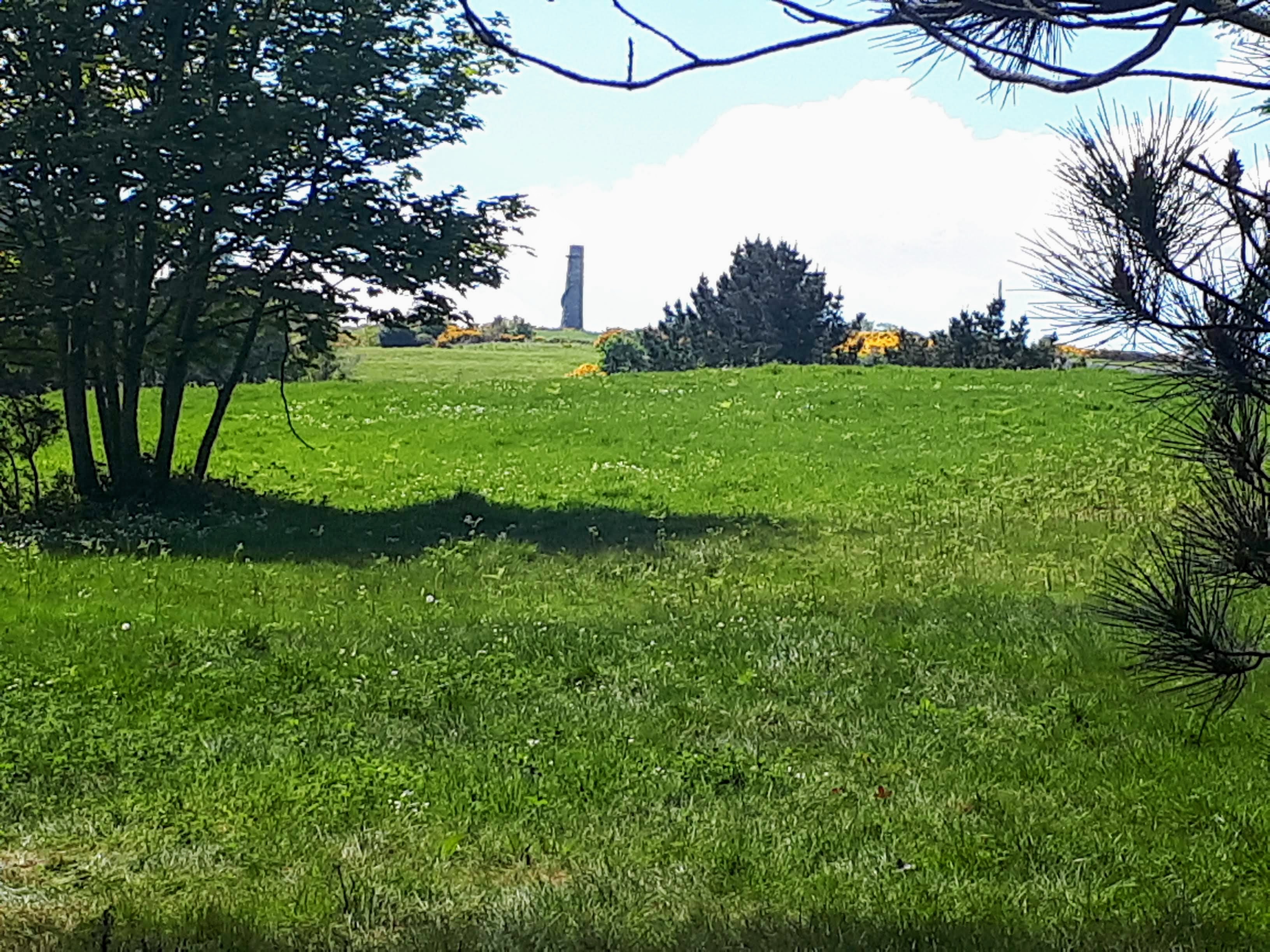 Look who didn’t listen to his mammy!!!!    Every Irish mammy warns that you ‘cast ne’er a clout til May is out’   No matter how nice the weather,  you keep your winter clothes on until the end of May!

Furze (Gorse / Whin) is in bloom so there is yellow everywhere.

We have an old saying  ‘When the gorse is out of bloom,  kissing is out of season’.   Of course,  as there are several species of the plant which flower at different times of the year,  we can safely say that kissing is never out of season in Ireland!

The wood comprises a mixture of coniferous and deciduous woodland,  scrub and grassland.   You might be lucky enough to spot a red fox,   badger,  rabbit,  pygmy shrew or Sika deer.

The site map shows the location of a RÁTH.    A Ráth was an earthen ringfort found throughout the less rocky parts of the country.   They were used as family dwellings or for housing livestock.

The grassy remains of the earthen banks are just about discernible.

Further on you’ll find the ruins of 16th century Puck’s Castle.  It would have been a fortified homestead and there are many similar buildings from that era around the city.    Puck is derived from the Irish ‘púca ‘meaning ghost or spirit.   I don’t know how the castle got its name – some say it was built using sacred stones from a nearby ráth – but I can tell you that a fairy piper is often seen jumping from rock to rock while playing his pipes! 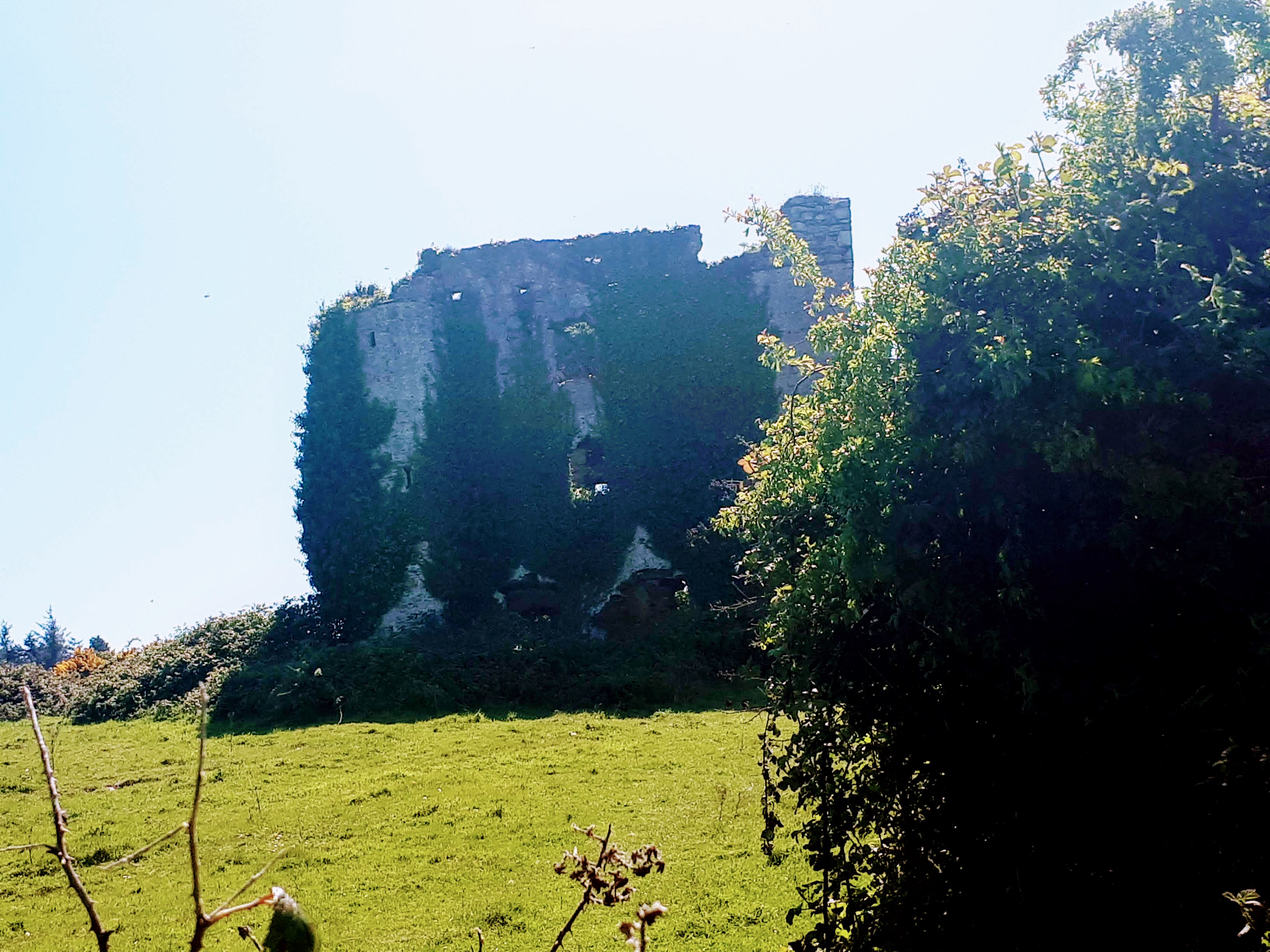 Old Rathmichael Church stands within the boundaries of a huge ring fort.  It dates back to the 12th century and was in use until it fell to ruins in the 16th century.

Look at this treasure –  Grave slabs,  known as the Rathdown Slabs,   were original grave markers from the Viking era.   Attached to the church walls,  they are well worn by time and the elements  but we can still make out the pattern or motif. 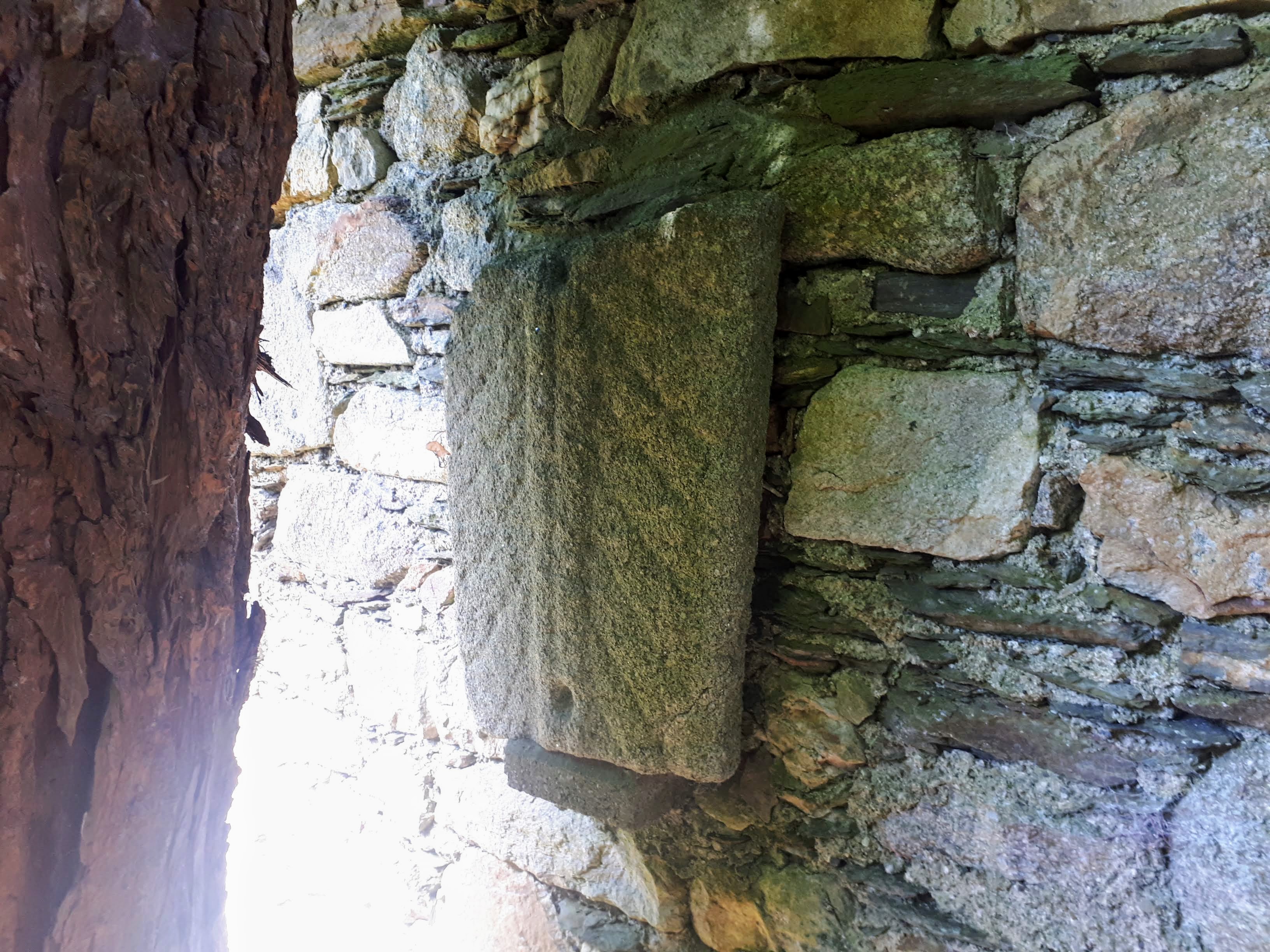 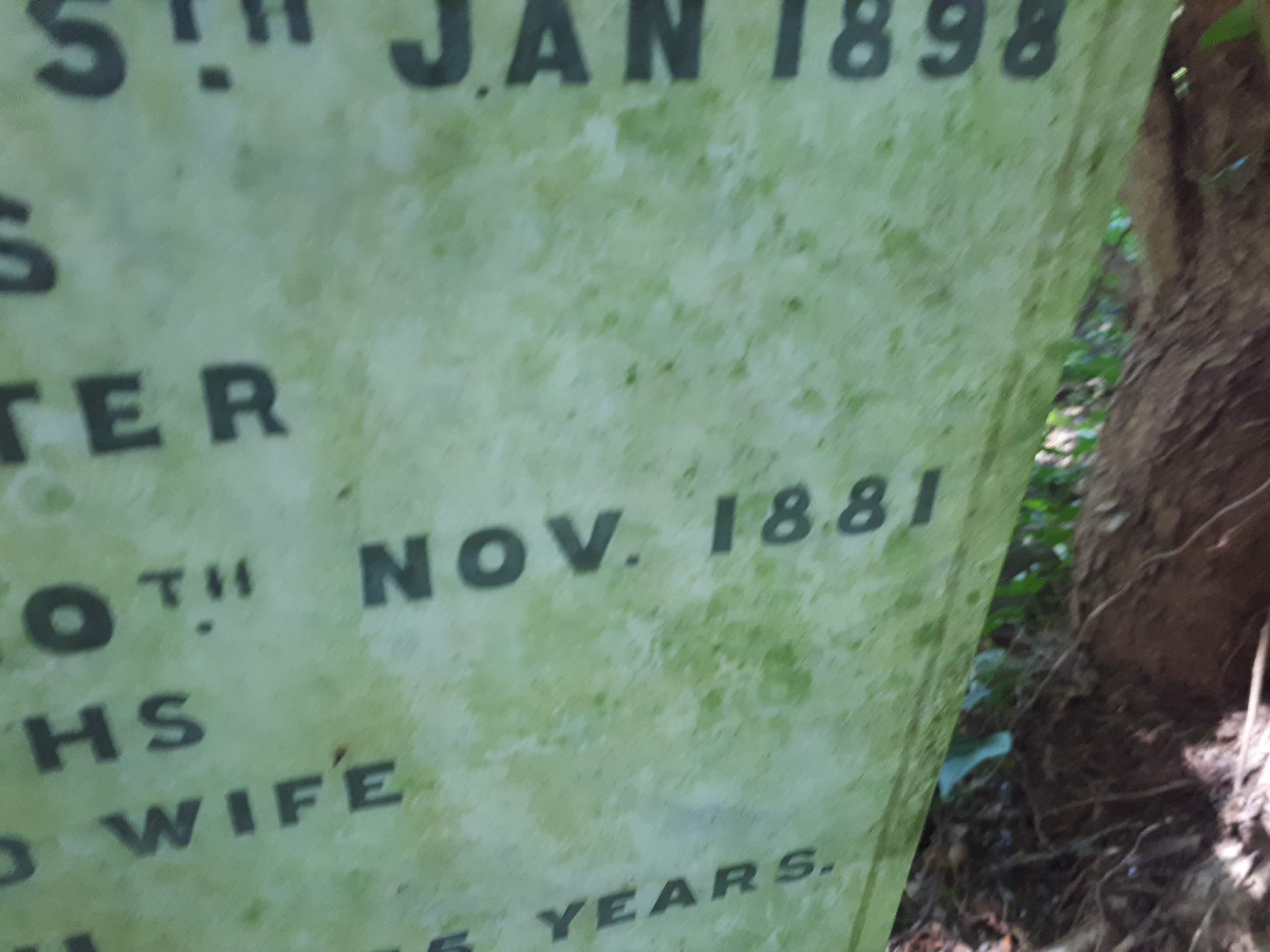 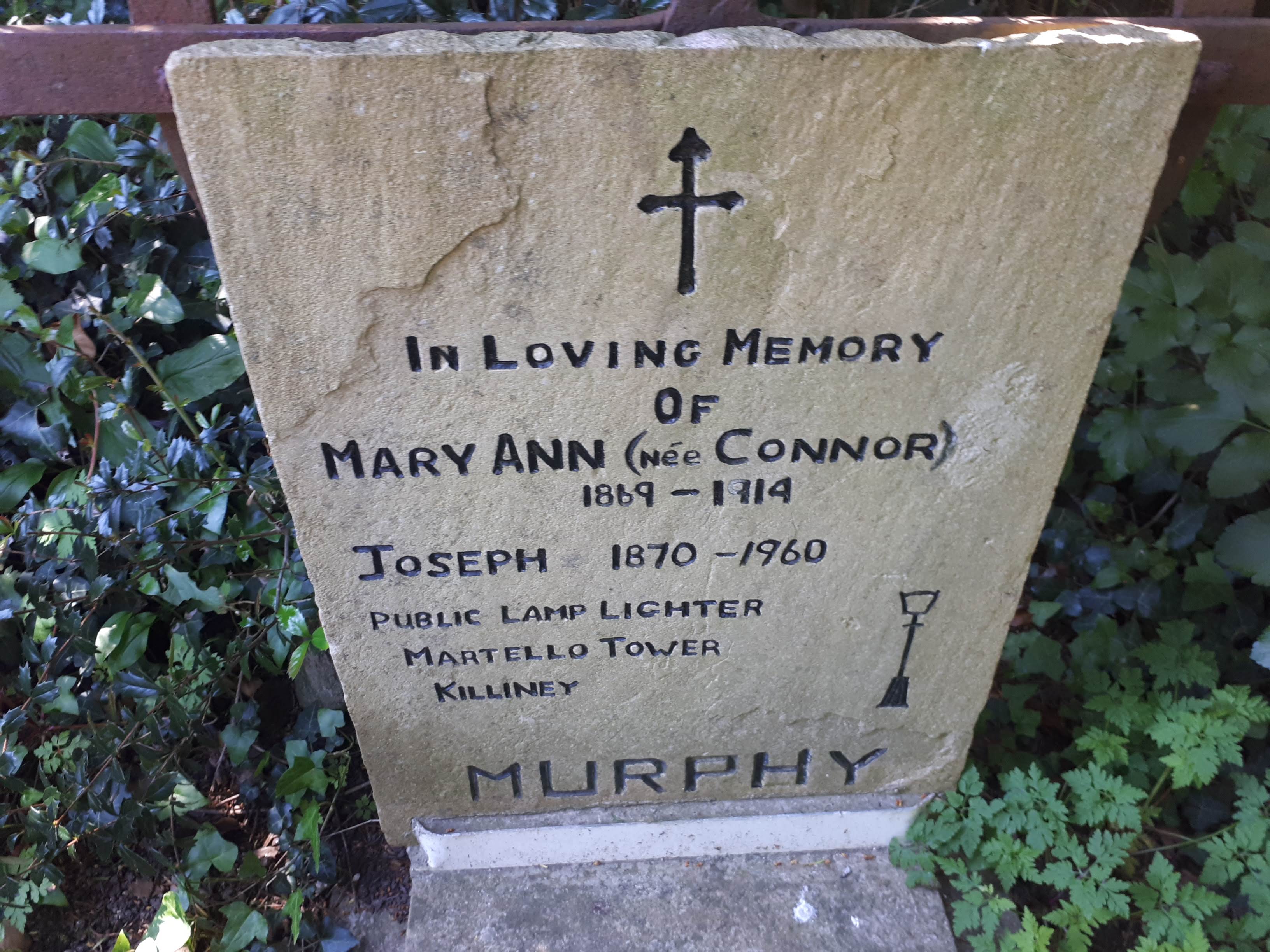 This is what we locals call The Skull Hole.   Its actually the remains of a round tower dating back to at least the 9th century.  Its charming name comes from the fact that it was used at one stage to store skulls and bones from nearby graves…

There are a few theories …. one is that the graveyard was being cleared to create extra space and some remains were ‘deposited’ in the hole rather than being re-interred.

Another theory suggests that bones became exposed over time: new coffins weighed more than old ones and so when a grave was opened,  the old remains were dug up,  the new coffin lowered and then the older coffin put back on top.   Over time,  the old coffins disintegrated,  exposing their contents to the elements.   Those uncovered bones were put into the handiest receptacle available!

It is also said that the hole is actually the entrance to a tunnel going down to the coast.     This may be true as there is evidence of an underground passage close to the tower.   This would be a Souterrain –  a passage built in the Early Christian period as an escape route from invading Vikings.

A piper (not the one up at Puck’s Castle!) was once seen entering the tunnel playing his pipes – but was never seen again!

So there you have my woodland walk – ghosts,  fairies,  raths,  Celtic crosses,  Viking headstones…

As of 2 days ago,  our 2km radius has been extended to 5km…. who knows what gems I’ll find in the coming days!