How does one go about selecting just 10 gems!   There are some glaring omissions but I’ve tried to give a geographical spread (obviously there could be 10 sites in Greece alone….or Italy….or Egypt….).   There are sites here from everyone’s bucket list as well as some lesser known treasures.  I’ve visited all ten,  some more than once,  spanning 1981 to 2018 (so apologies,  in advance,  for photo quality!).   I’ve no favourites here,  I love them all and hope you get to visit them one day….

One of my 10 sites is NOT listed as a UNESCO World Heritage Site – I’ll tell you which one the end.

This must have been one of the Roman Empire’s furthest outposts.   At its height it was home to 20,000 residents.   Surrounded by fertile land,  it was a big olive oil producer and many wealthy inhabitants built fine homes.   Grand columns and arches are still visible today but its towards the remains of those once fine homes that we look,  for their amazing mosaics.   Some 30 have survived,  depicting scenes from everyday life and mythology.  Of course they managed to withstand the ravages of time because they were buried under rubble.   You might want to get here soon enough,  before necessary measures are taken to protect them once again. 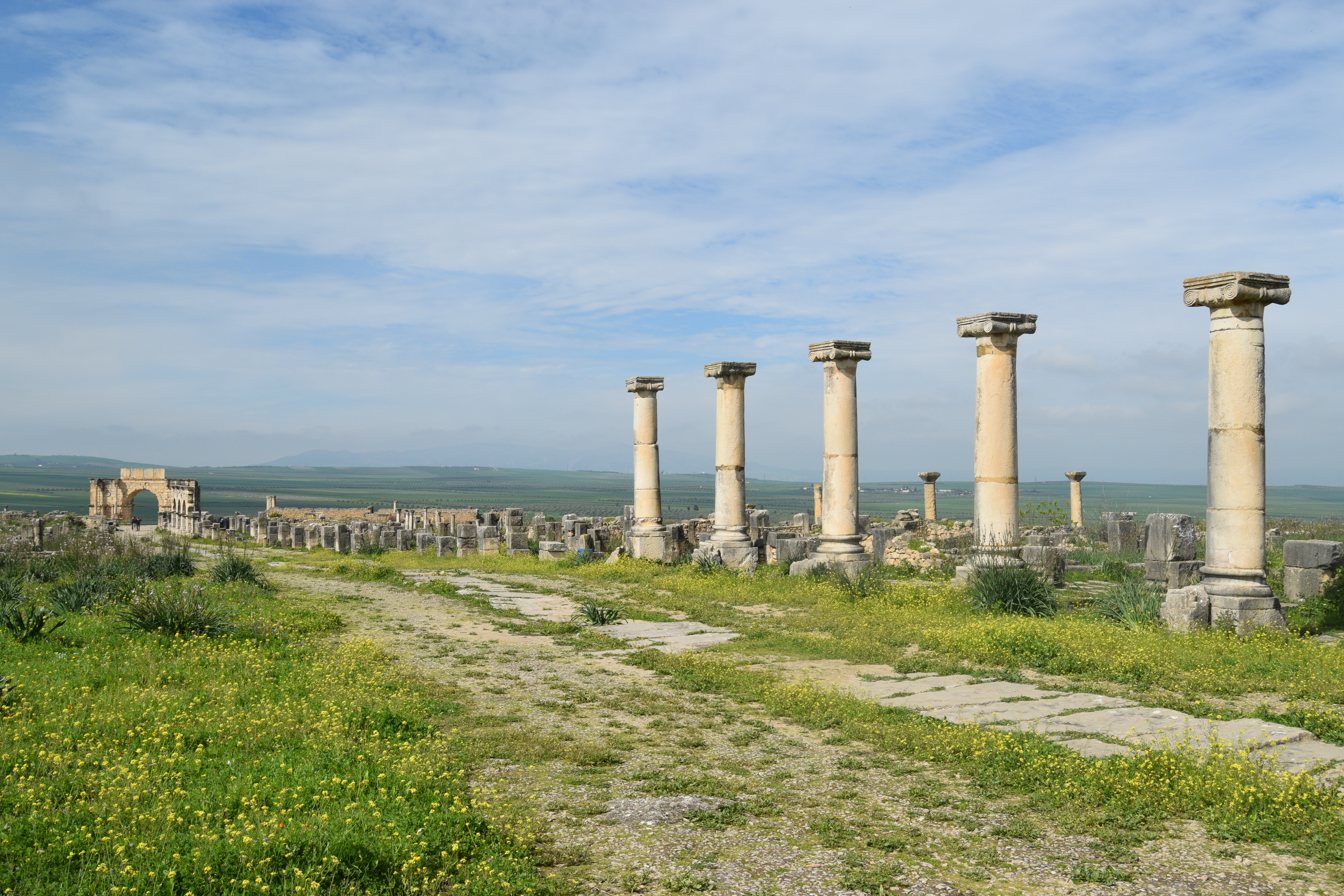 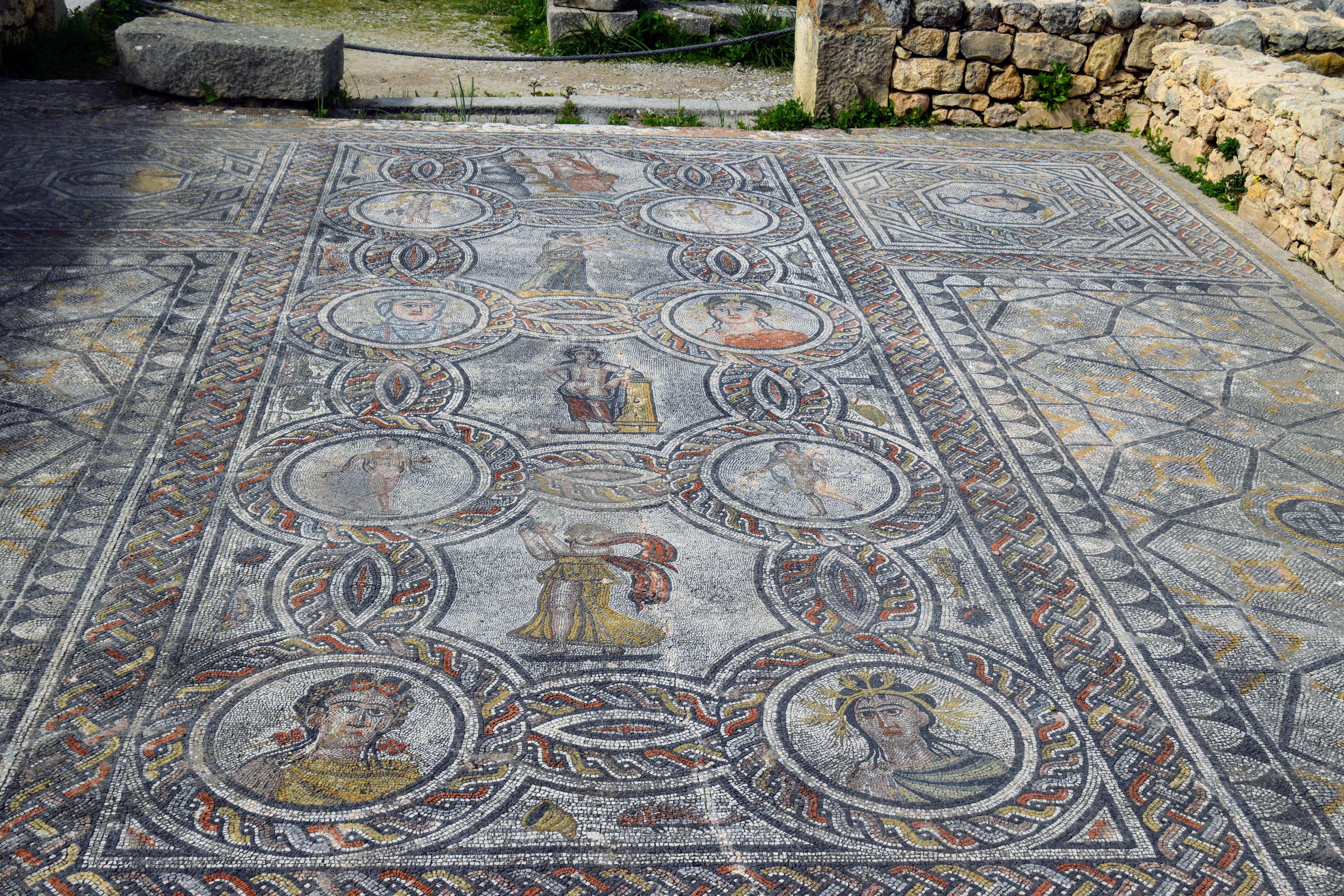 What a setting – I wouldn’t mind a holiday home here!

The ancient city of Carthage was a major trading centre in the Med.   This was a bit of an obstacle for the Romans who wanted control of the region.    Hannibal (yes he of the elephants!) was the city’s most famous son and hero.   One of the greatest military leaders in history,  he caught the Romans off guard when he reached Italy via the Alps with his army and 37 elephants.   He never managed to take Rome though and eventually the Romans had their revenge,  destroying Carthage in 146 BC.   They even threw salt over the ruins,  making the soil infertile.   The city was later rebuilt under Julius Caesar and became a major part of the Roman Empire until about 700 AD 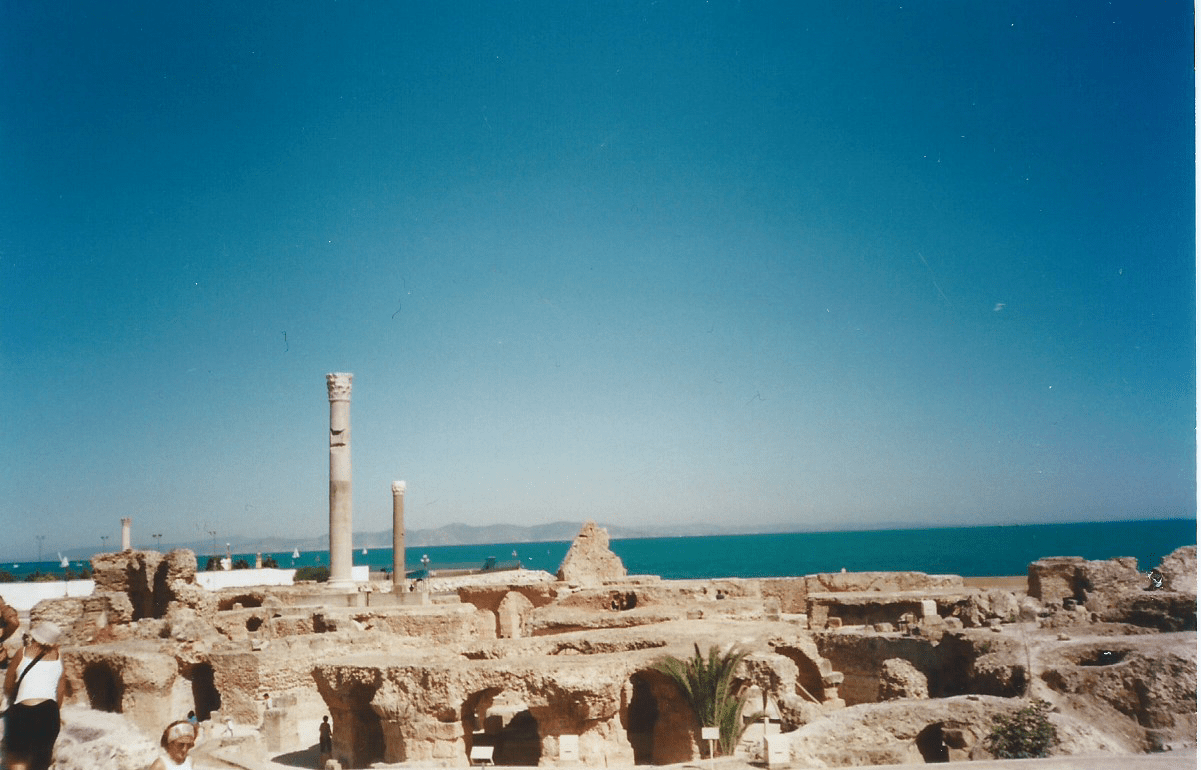 There are so many amazing things to see in Egypt but I’m trying to stick close enough to the Med so I chose Saqqara.    I love the step pyramid of Djoser.    This is the oldest pyramid in the world.    Before this,  kings were buried in rectangular mounds called mastabas.    Around 2780 B.C.,  King Djoser’s architect,  Imhotep,  wanted to build a grand tomb for his king,  so he placed six mastabas,  each smaller than the one beneath,  in a stack to form a pyramid rising in steps. 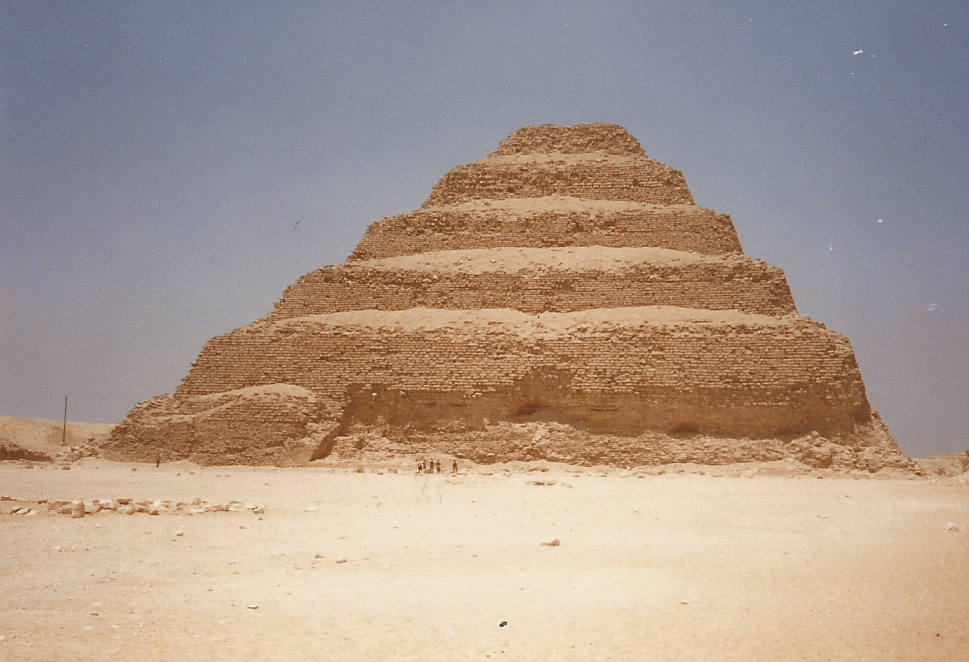 Ephesus was one of the most famous cities of the ancient Mediterranean and,  for centuries,  served as a crossroads between East and West.   Here stood the Temple of Artemis,  one of the Seven Wonders of the World.    It also played a vital role in the spread of Christianity and was visited by St. Paul and St. John among others.   Mary, the mother of Jesus,  is thought to have spent her last years in Ephesus.    Her house and St. John’s tomb can be visited there today. 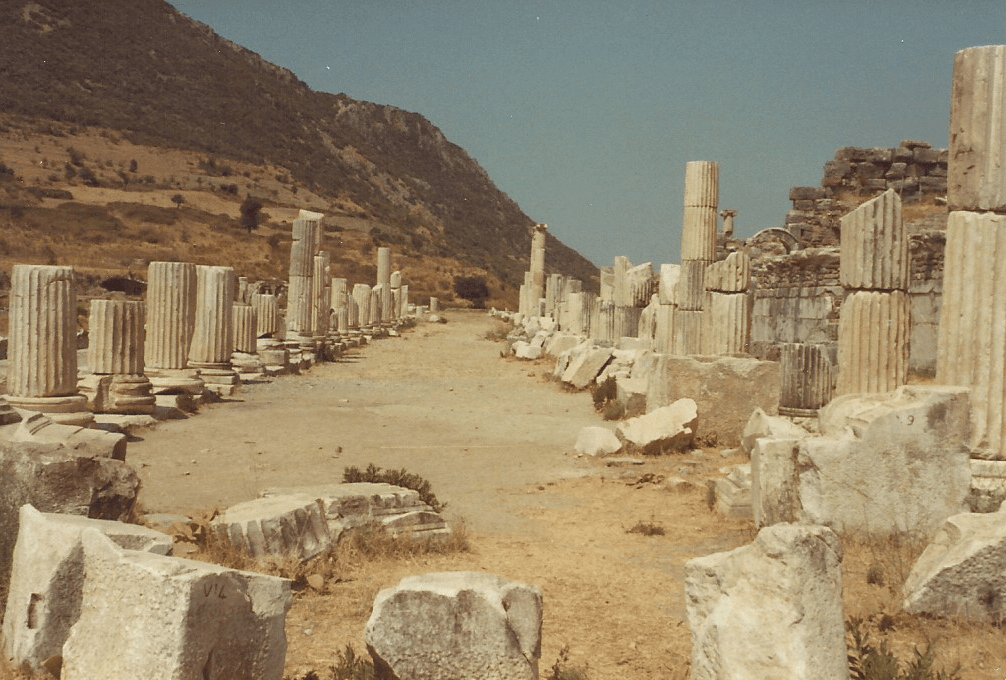 Travelers, writers and scholars long wanted a setting for Homer’s Iliad.   It seems unbelievable nowadays that Troy could have been lost at all,  but lost it was.   Over time, its remains crumbled away and became part of a low unremarkable hill.  The site was rediscovered in 1873 and evidence eventually revealed not one,  but nine Troys,  each built over the ruins of the previous city.   The seventh layer is thought to be the site of Homer’s epic. 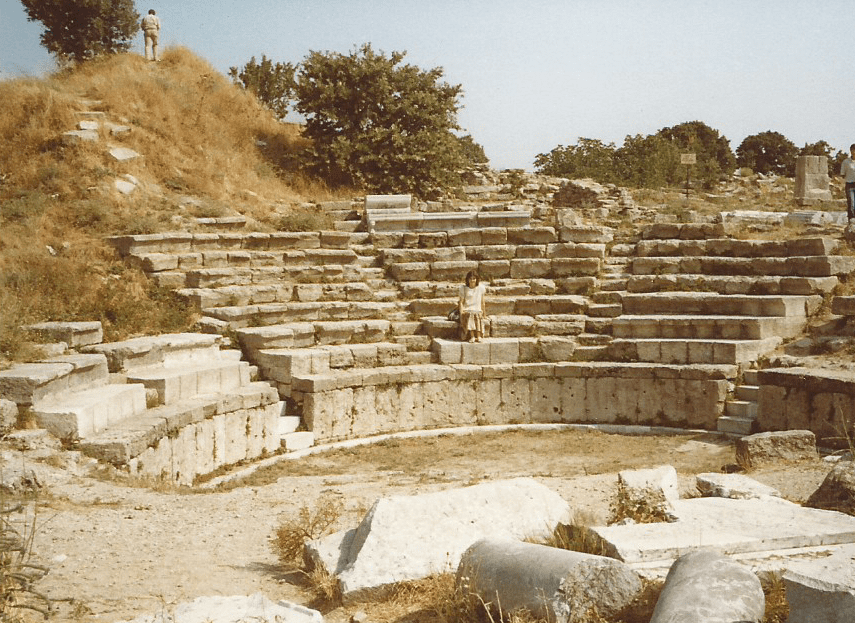 “Acropolis” comes from the Greek words “akron” ( meaning “highest point or extremity” and “polis” (meaning “city”).   There are several acropoleis in Greece but for most of us,   Acropolis means Athens.   So,  the Acropolis is the high hill in Athens and is home of the Parthenon.   This temple,  dedicated to the goddess Athena,  must surely be one of the most iconic structures in the world. 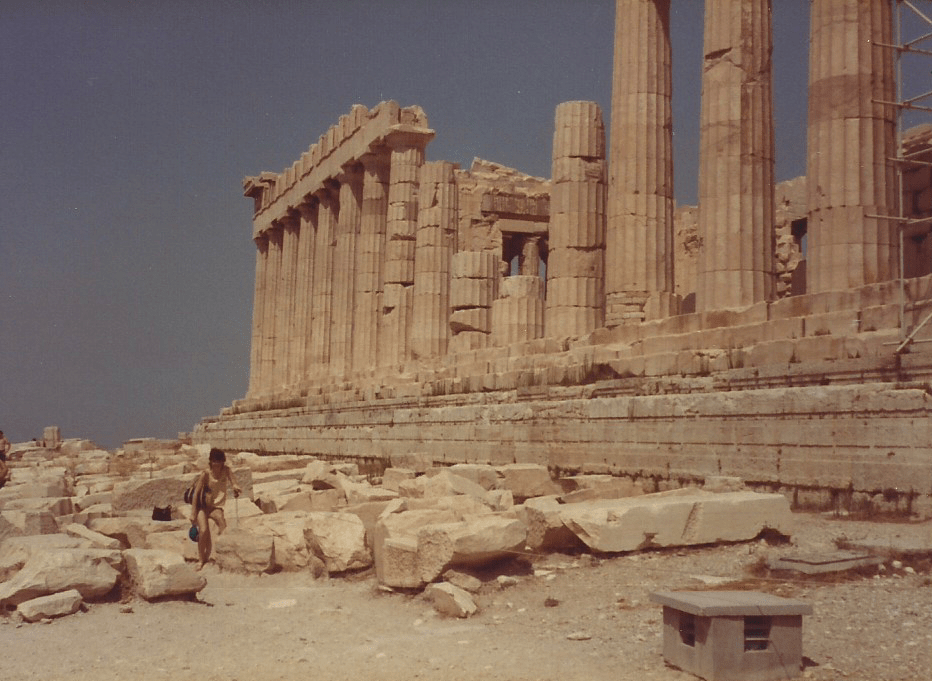 It has been estimated that there are still about 230 Roman amphitheaters in existence today (but I like this one!).  Like the others throughout the empire,  Pula Arena was used for gladiatorial combats and later for contests between convicts.   At its peak,  it could seat 23,00 spectators.  Later,  during the Middle Ages,  it hosted tournaments for knights.  Today, the imposing structure is still used for concerts,  film festivals, etc. 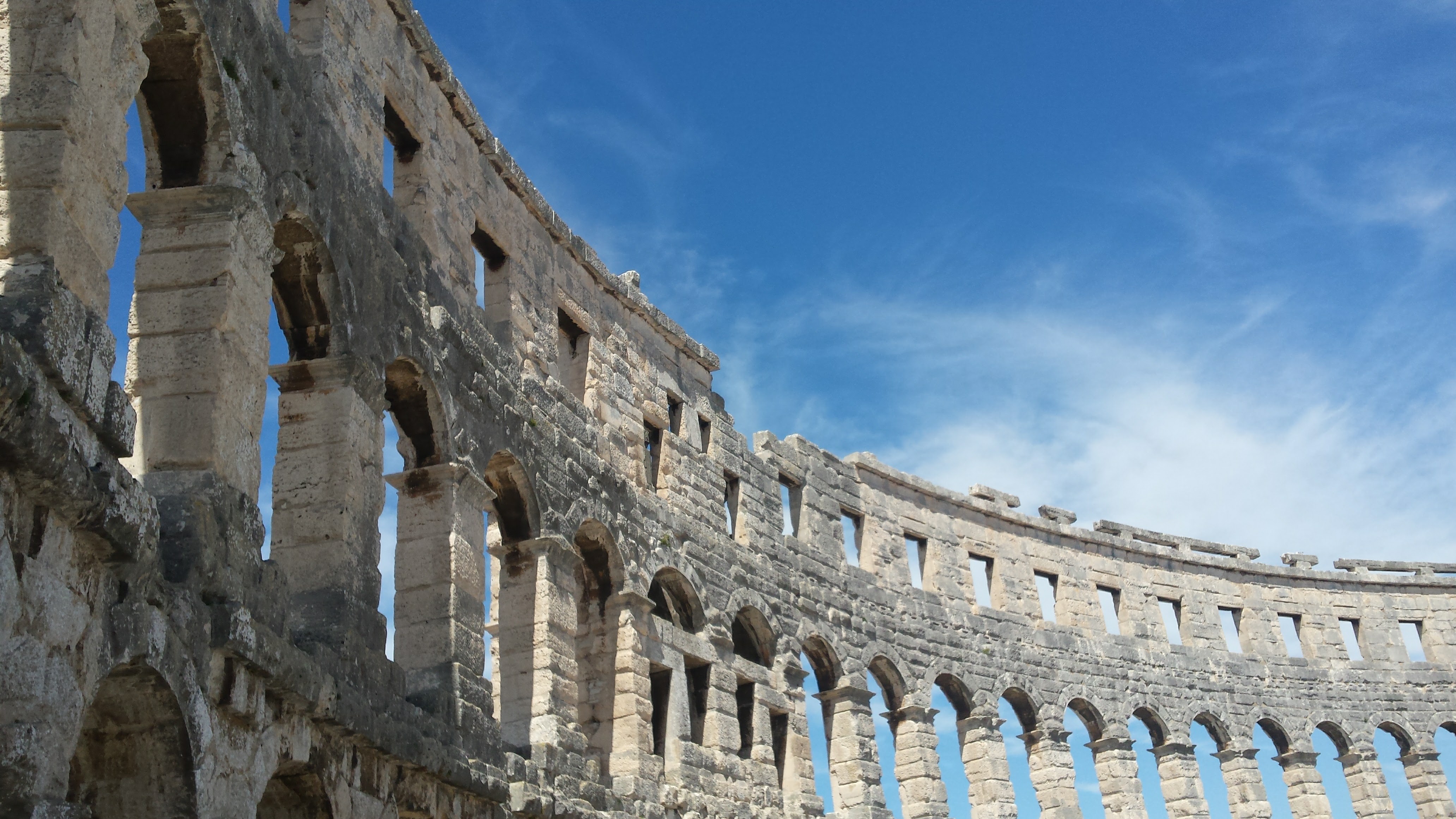 Here’s a twist – Greek ruins in Italy!  This Greek colony was a prosperous trading centre and later an important Roman settlement.   During the 9th century,  the city was abandoned due to malaria and was lost in forest and swampland until rediscovered around 900 years later.   Harsh conditions prevented plundering and destruction and,  as a result,  you can visit not one but three splendidly preserved Greek temples.

In the museum,  you can see the “Tomb of the Diver”,  which was found close to the site by an artichoke farmer in 1968.  All 5 slabs of the tomb were painted on the inside,  the cover slab showing the famous scene which gives the tomb its name.   Dating back to 480 BC,  the find was of huge archaeological importance,  being one of only a few such examples of archaic Greek painting to survive in its entirety. 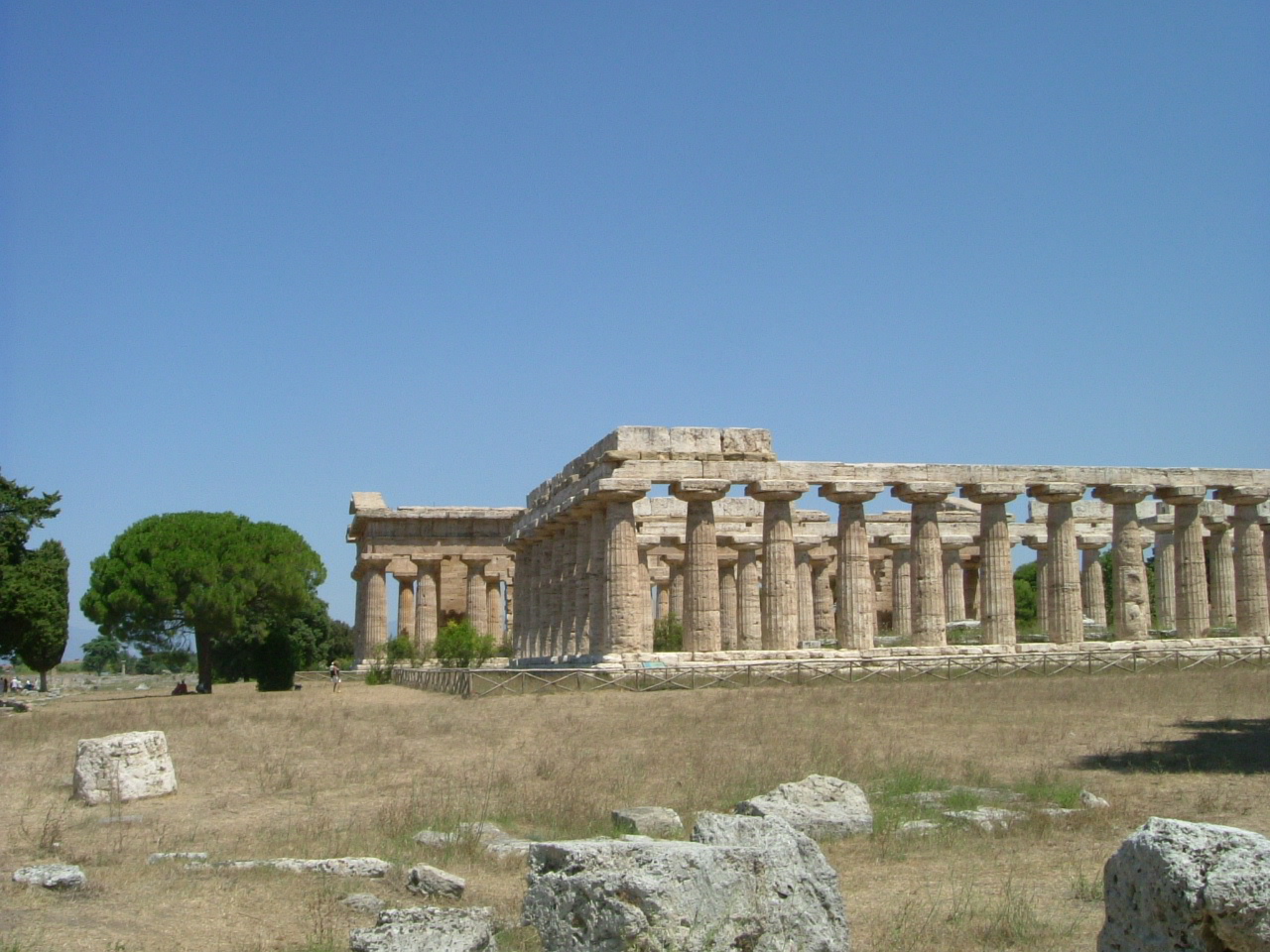 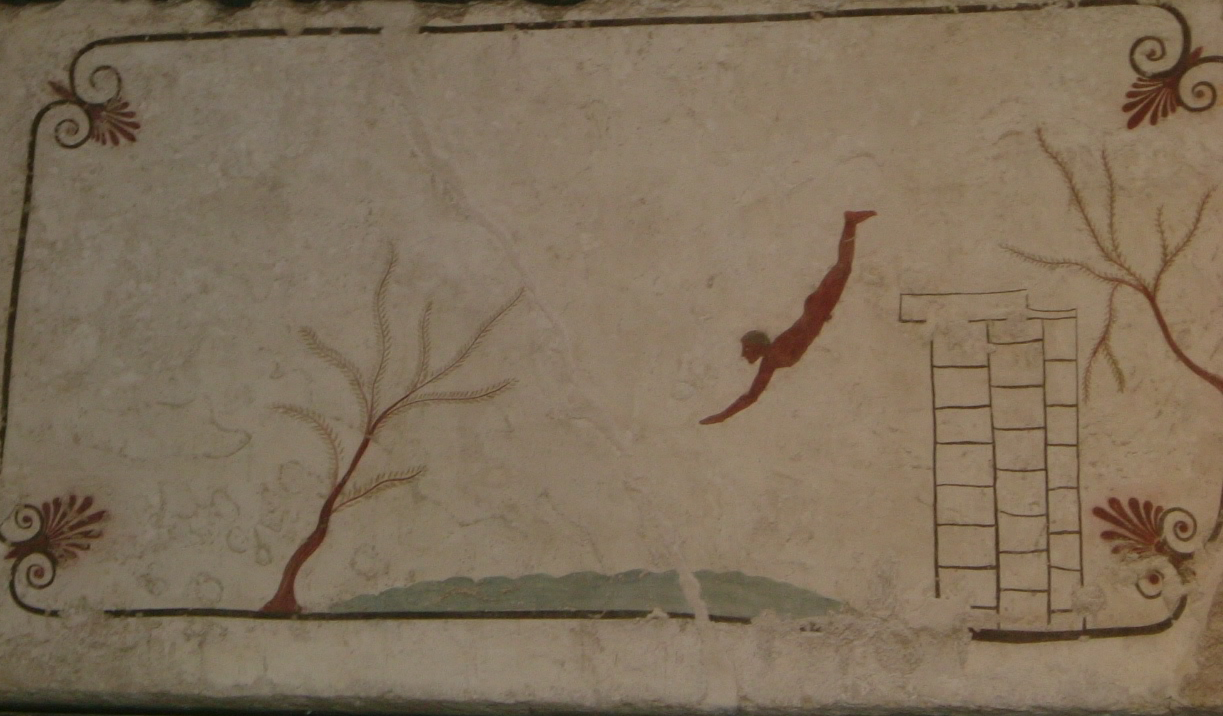 Founded by Greek settlers,  Agrigento was the largest and most prosperous city in the Mediterranean sea during its peak.   Today,  much of the ancient city still lies beneath fields and orchards but you can explore the Valle dei Templi which is one of the most extensive archaeological sites in the world.   This beautiful landscape is home to a magnificent collection of seven ancient Greek temples dating from the 6th and 5th centuries BC. 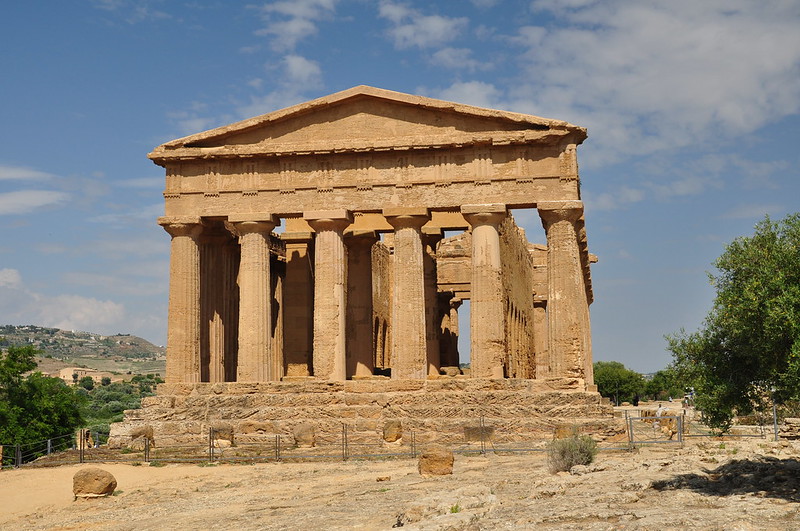 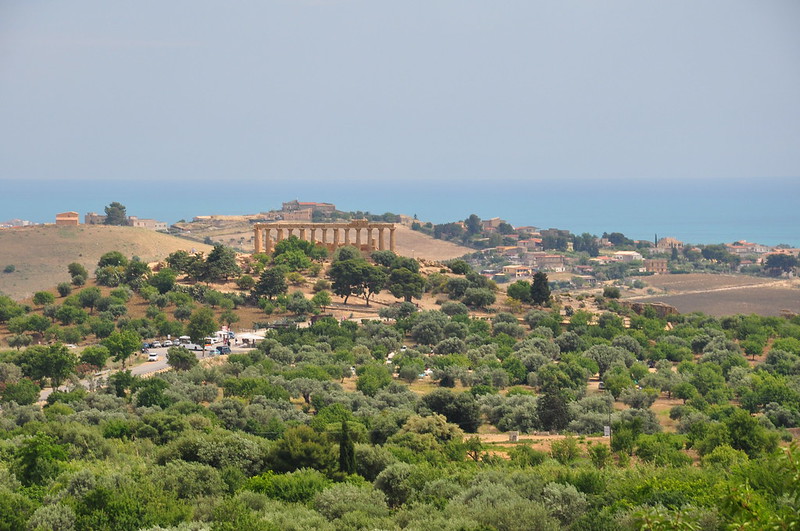 This ancient colony on the Costa Brava was founded by the Greeks in the 6th century BC and later occupied by the Romans.  It was a prosperous town until it lost its importance and was abandoned in the 3rd century AD and disappeared beneath the dunes. Excavations began in 1908 and now you can wander through a network of streets,  drainage systems and houses and enjoy about 150 mosaics and pavements. 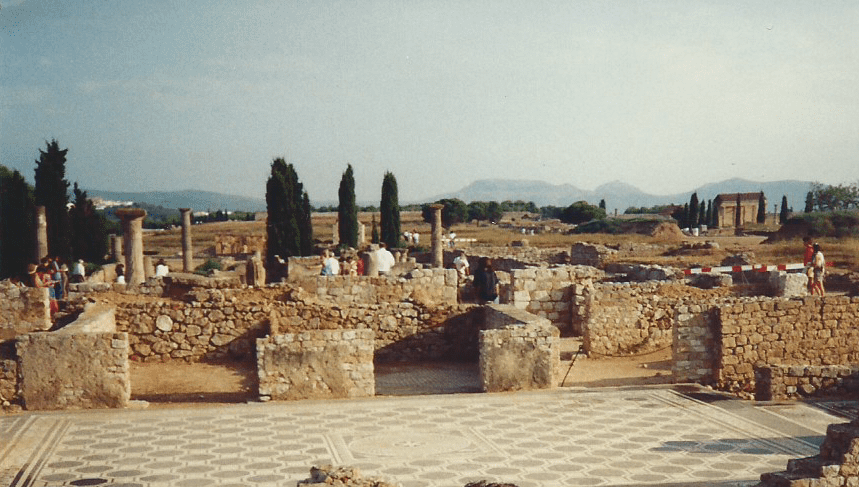 Trivia Moment  – Pula Arena is NOT a UNESCO World Heritage site.   Croatia has applied twice to get the arena listed, but has withdrawn the application.   I believe the issue is related to materials used in restorations works. 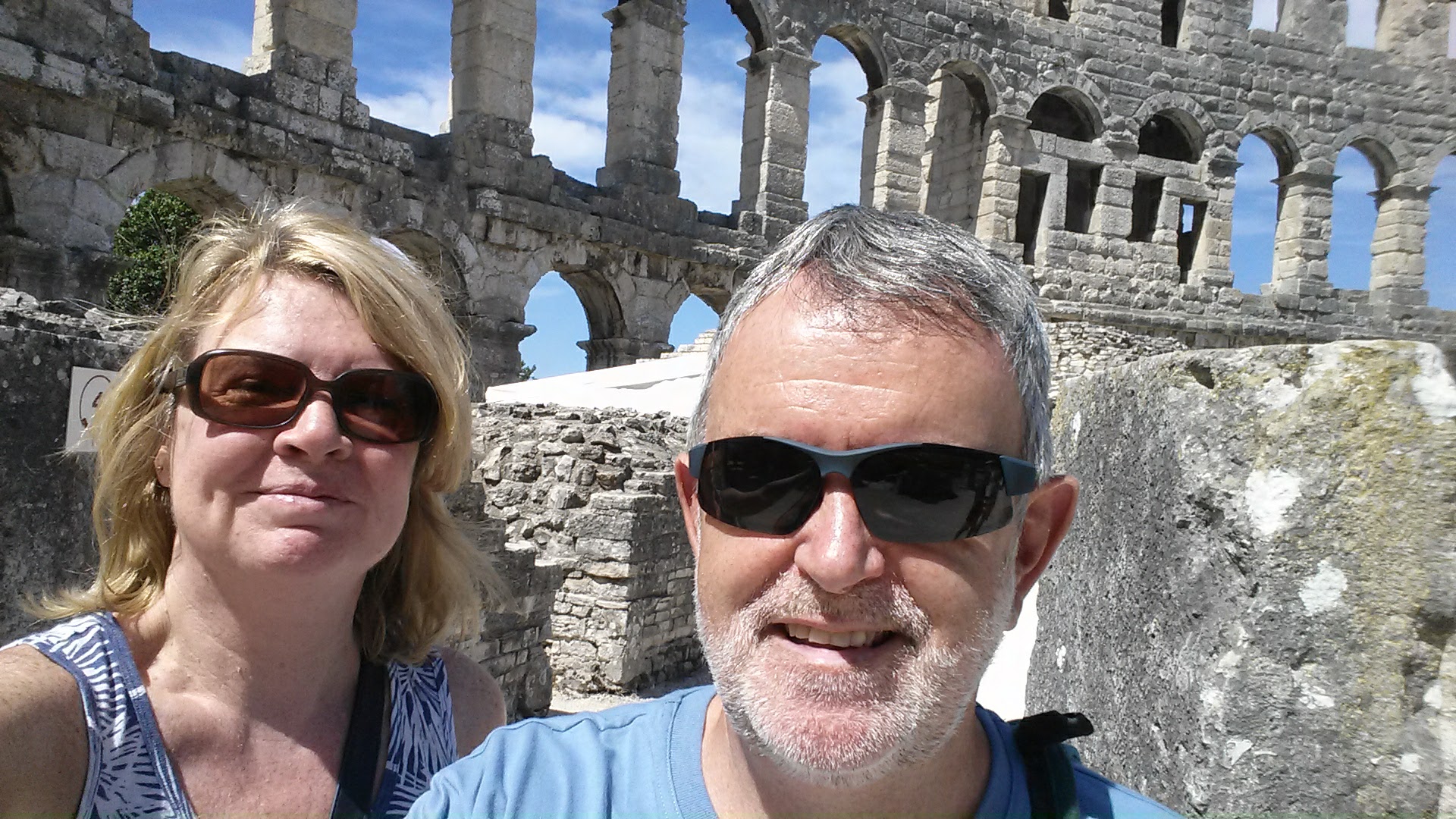