We’re just back from 6 nights in County Kerry so here are a few observations for those of you thinking of heading off over the next few weeks:

We stayed in two Bed and Breakfast establishments which had differing approaches to the pandemic.   The first one (in Kenmare) has reduced the number of rooms available and the dining room has been laid out with social distancing in mind.  Breakfast is to order and all food and beverages are brought directly from the kitchen.

The second B and B (in Dingle) reopened all rooms.  They tried to coordinate breakfast times by phoning people in advance etc. but found that too many people were gathering in the dining area at the same time.  Solution?…. they did away with breakfast altogether!!!  Not as drastic a measure as it sounds – there are lots of breakfast options close by and they knocked €20 per night off the bill.

General word about accommodation is that people are opting for hotels or self catering house rentals instead of B and B’s.  There are more visitors choosing half or full board in the hotels rather than going out to restaurants.  Presumably that’s the logic behind the self catering options also. 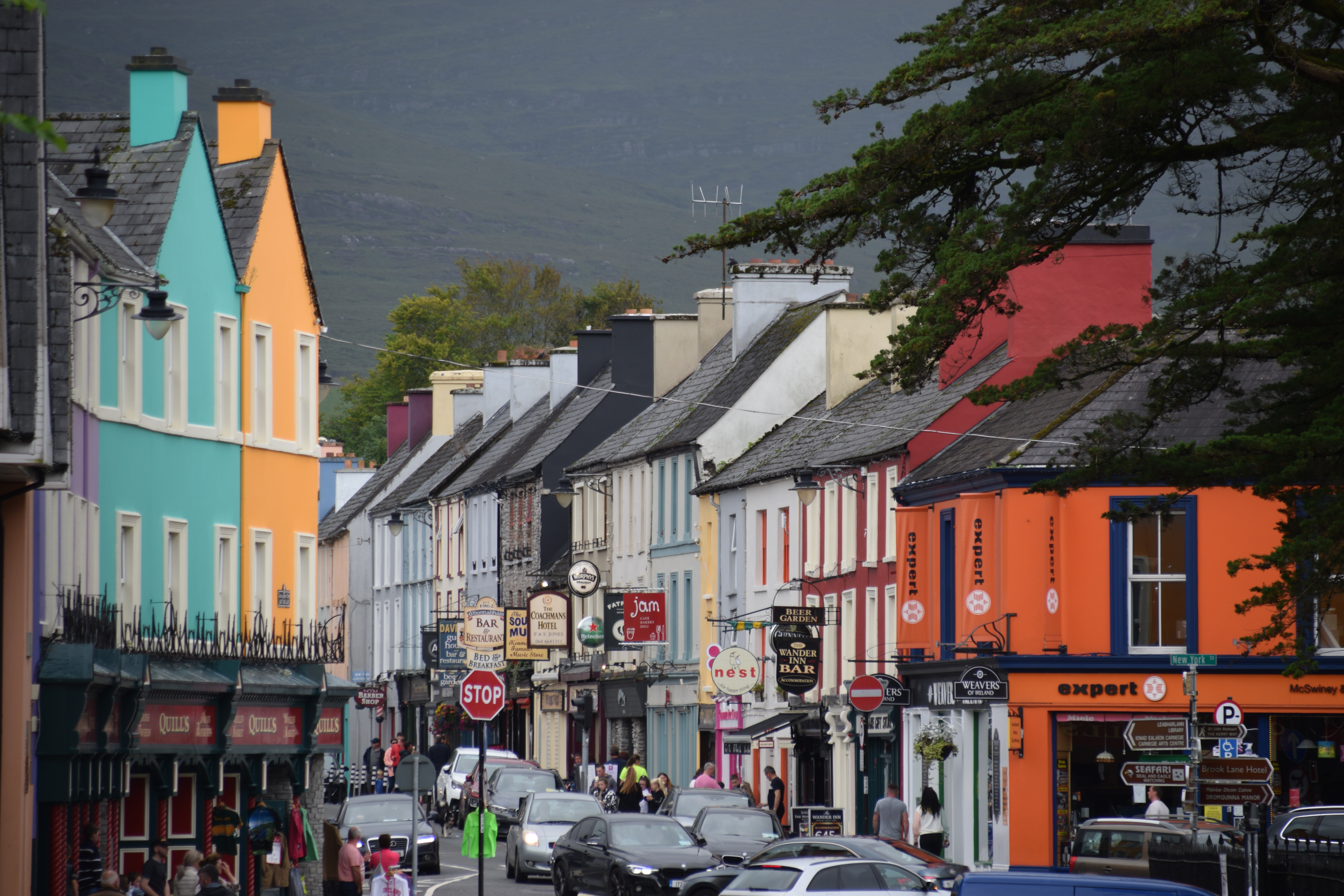 We had booked 6 restaurants in advance and were very glad we’d done so – bearing in mind our trip coincided with the bank holiday weekend.   There were definitely no ‘walk-ins’ at the more popular spots in Kenmare and Dingle – (not even for the following night in some cases).

Staff everywhere wore masks and there was a lot of spraying and cleaning going on.

As we were usually one of the last orders of the night ( we booked for 8.30pm) we were never asked to leave after 90 minutes but the restaurants were closing up anyway so we didn’t really linger after our meals.

On the Saturday night,  we ate in a pub in Kenmare.   It was unbelievable how many people came in trying to just get a drink (Pubs are only allowed to open if they serve food).   Many seemed to be locals – assuming that the rules didn’t apply to them.   Everyone awaiting a table was directed to a ‘waiting room’ where we were given a menu and asked in advance for our order – clever solution…. I could have sat there all night watching the scene as the poor barman,  assigned to the chore,  had to explain again and again that ‘no – the 4 of you can’t order drinks if one of you orders a salad’.   And in case you are tut tutting about the youth of today,  the worst offenders were the silver brigade who were definitely chancing their arm with the ‘ ah, you’re not throwing us out are you.’   Wisely,  the barman involved was a senior staff member, and was well able for it all.

Businesses are becoming creative in Dingle and in a few cases,  restaurants and next door pubs have combined to share facilities…. e.g….. This might be a small enough restaurant using the beer garden space of the pub.   The restaurant supplies the food – mostly outdoors,  and the pub supplies all the booze.  Works quite well.  We heard of one pub that has brought a chip van or something similar into its beer garden but didn’t come across it on our travels.

Coffee shops and ice cream parlours are busy.  The fish ‘n’ chip vans in Dingle are doing a great trade! 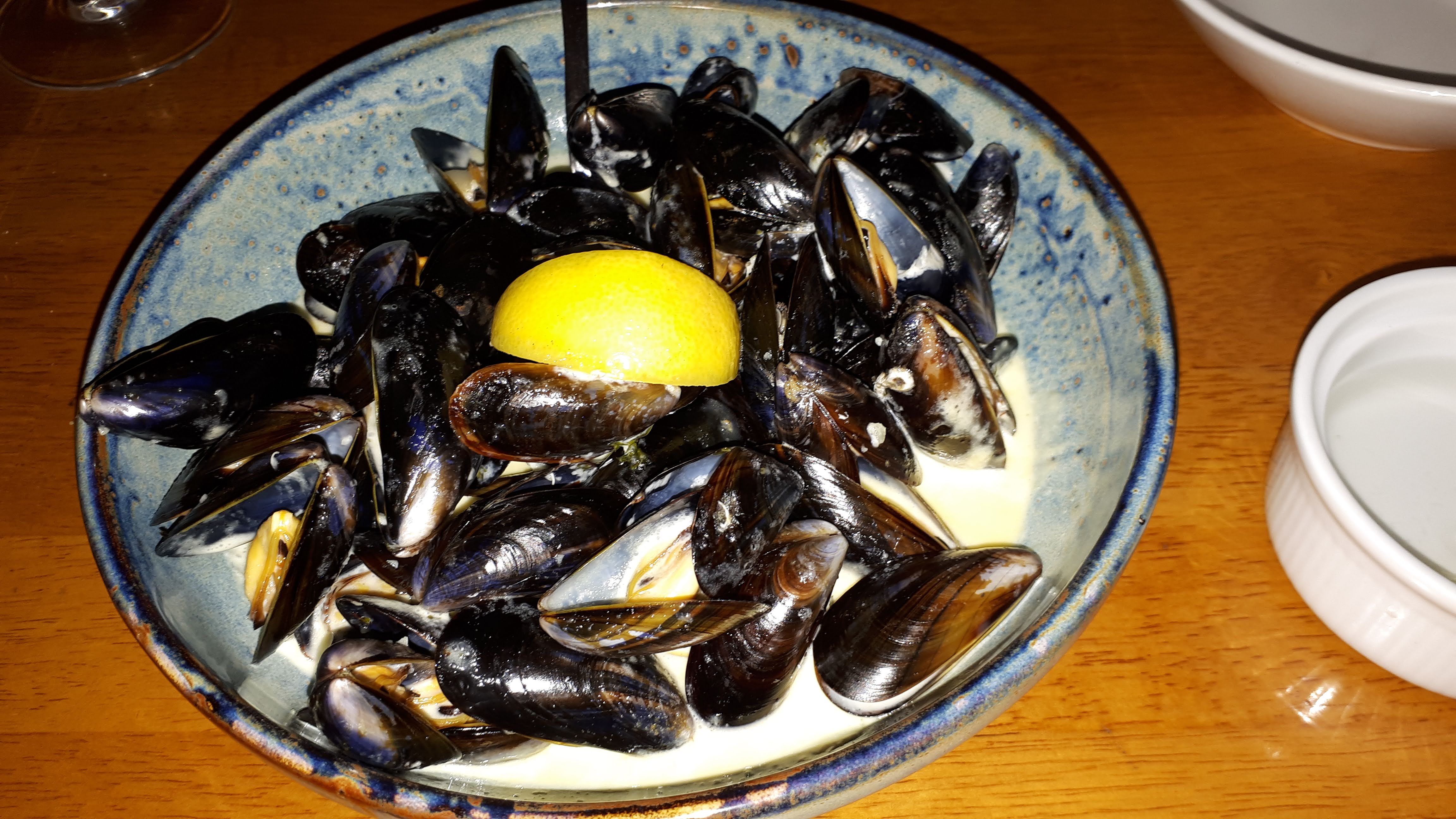 Not a bit of it!   Both Kenmare and Dingle were dead by 10.00pm each night.  There was word on one of the nights in Kenmare that a publican was going to take out his fiddle and play on the street around 10.00pm but it never happened – that’s as exciting as it got!!

Our Dingle B and B catered for a younger crowd and they were definitely drinking in their rooms.   (But it wasn’t a problem – there were no big parties in the house and no noise late at night).   No hens and stags in Dingle which was good news for us! 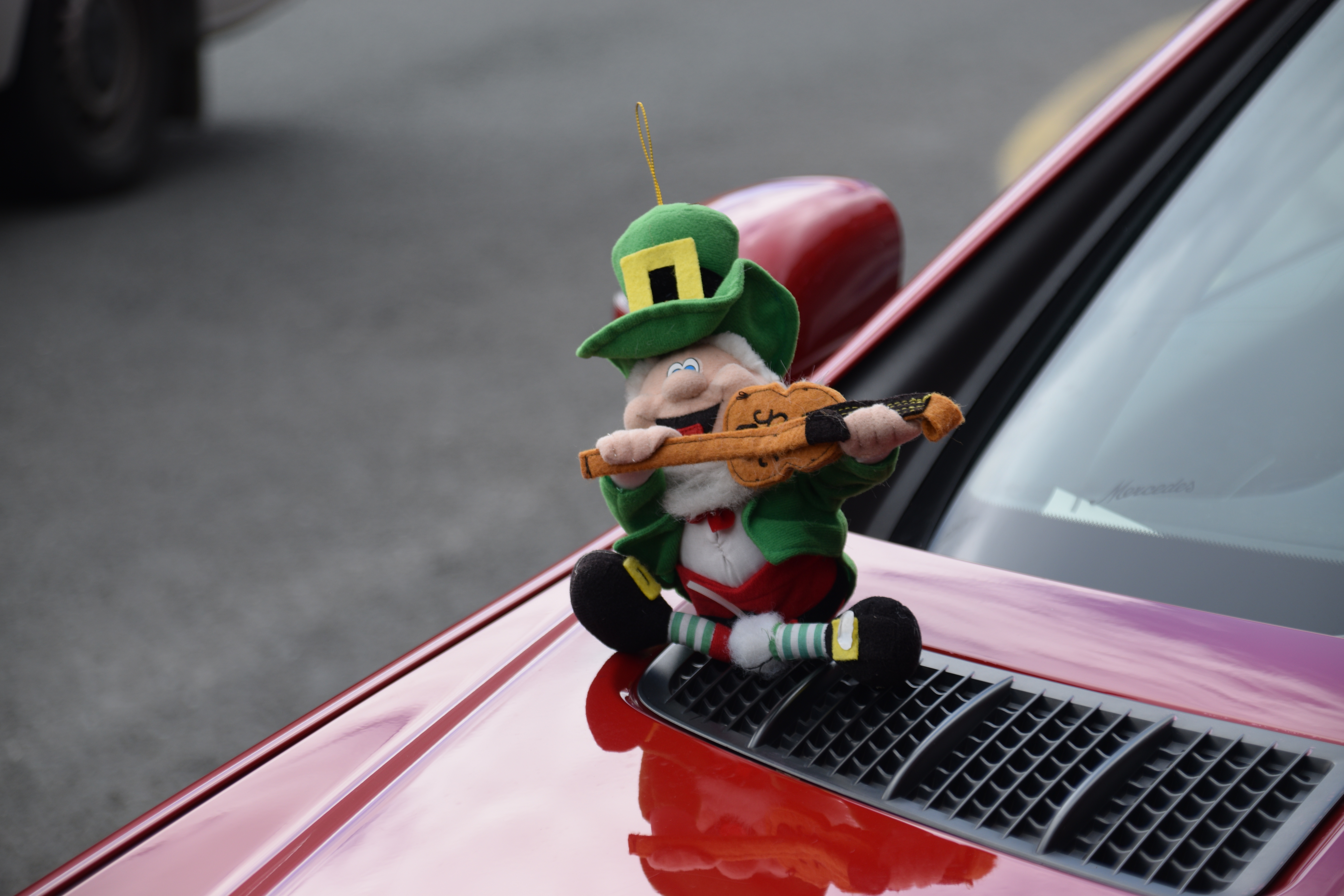 Kerry tradespeople in general are devastated with how the tourist season is going.

Everyone was delighted to see us and we got great service everywhere we went.

There are very few – if any – tour buses and coaches on the roads.  While there are plenty of domestic visitors,  parking is easy and available everywhere.   Car park signs suggest leaving every second space empty but of course that doesn’t work for long at the most popular sights.

Visitors are wearing masks in shops  and keeping their distance if they have to queue to get inside but, apart from that,  I didn’t feel that they were very mindful of social distancing on streets etc. 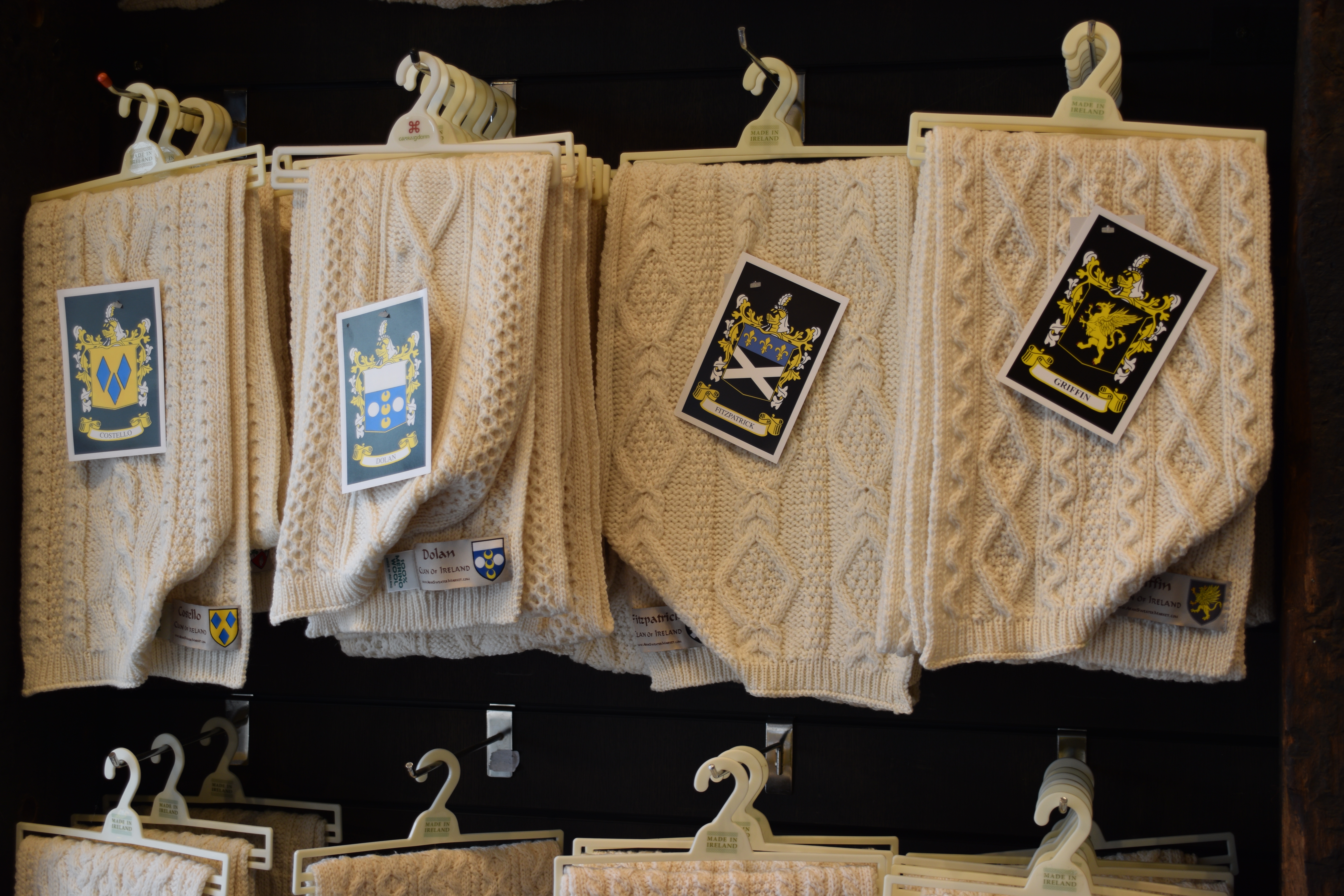 I’d forgotten how many great pubs there are in Kerry!   Because so many of them are closed (or you can only get a pint with a meal),  you actually get to see and do more than usual because you’re not tempted to stop and dawdle at every bar overlooking some spectacular view!!!

We’d only a few days but I’ve lots to write about so keep an eye out for Kerry posts in the coming weeks…. 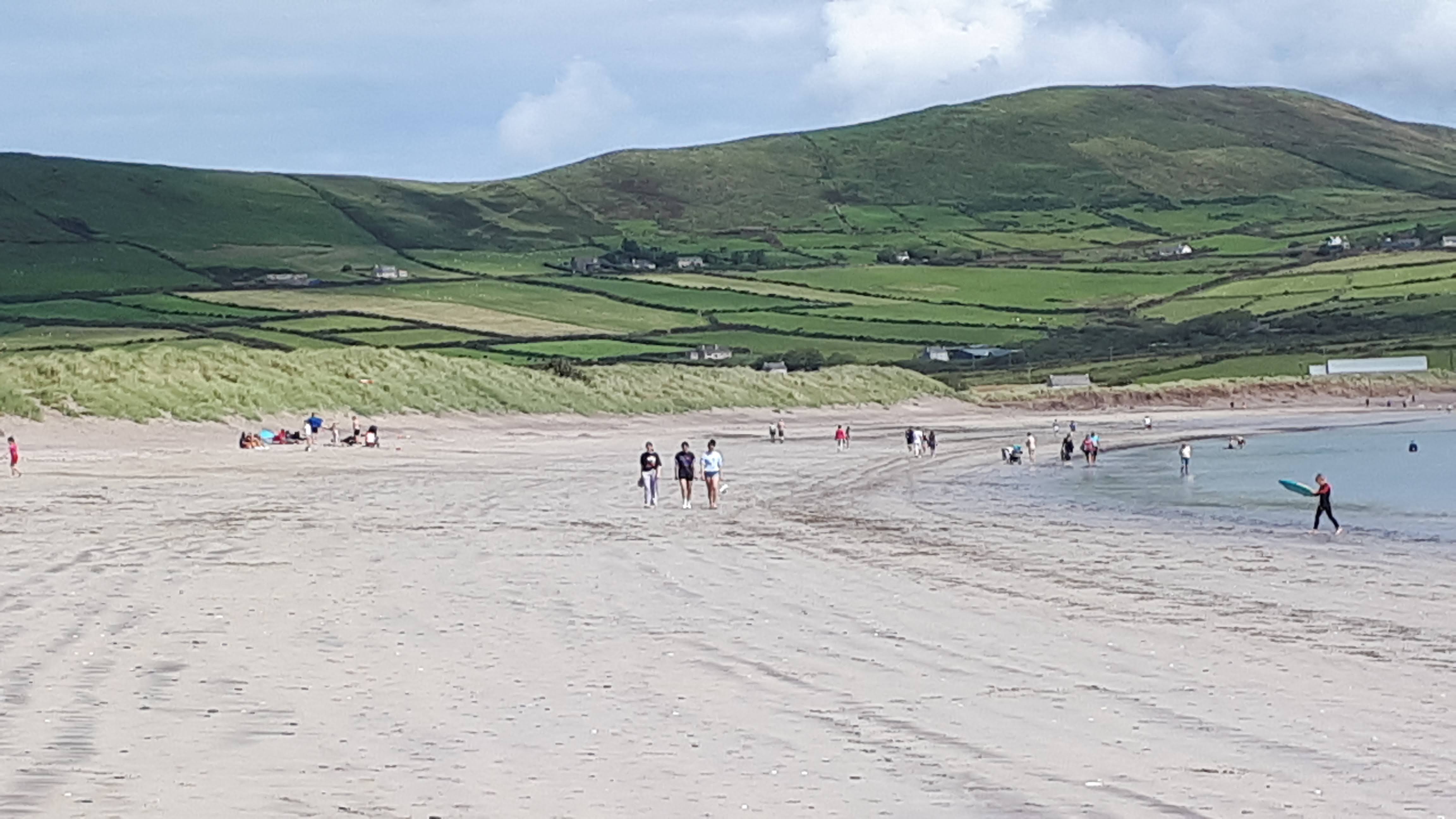 16 thoughts on “Back on the Road – its time to embrace that Staycation! Update….”