It doesn’t evoke that exotic image of Marrakesh nor our somewhat delusional romantic notion of Casablanca but Rabat is a pleasant surprise and worthy of a visit if you are planning  trip to northern Morocco.

The major sights can easily be covered in a day but that won’t allow time to sit in the coffee shops,  to wander through the medina and along by the river or to enjoy a restaurant or two in the evenings.  A central hotel and decent footwear will put pretty much everything within walking distance.   If walking is not for you then blue petit taxis are plentiful and cheap.   While in all my travels I’ve honestly never seen a fleet of city buses in worse exterior condition,  the city has an efficient and well maintained two way tram line (which incredibly,  at time of writing,  is listed by Tripadvisor as the number 1 attraction in Rabat!).

So why go to Rabat……

This beautiful attraction was originally a Phoenician settlement,  then a Roman city and later a fortified Muslim necropolis.  The approach to the fortifications is impressive and the setting is spectacular.   A walk through the gardens brings you to the ruins.  The site is not well labelled but your guide book will help.    It is currently home to over 100 storks! 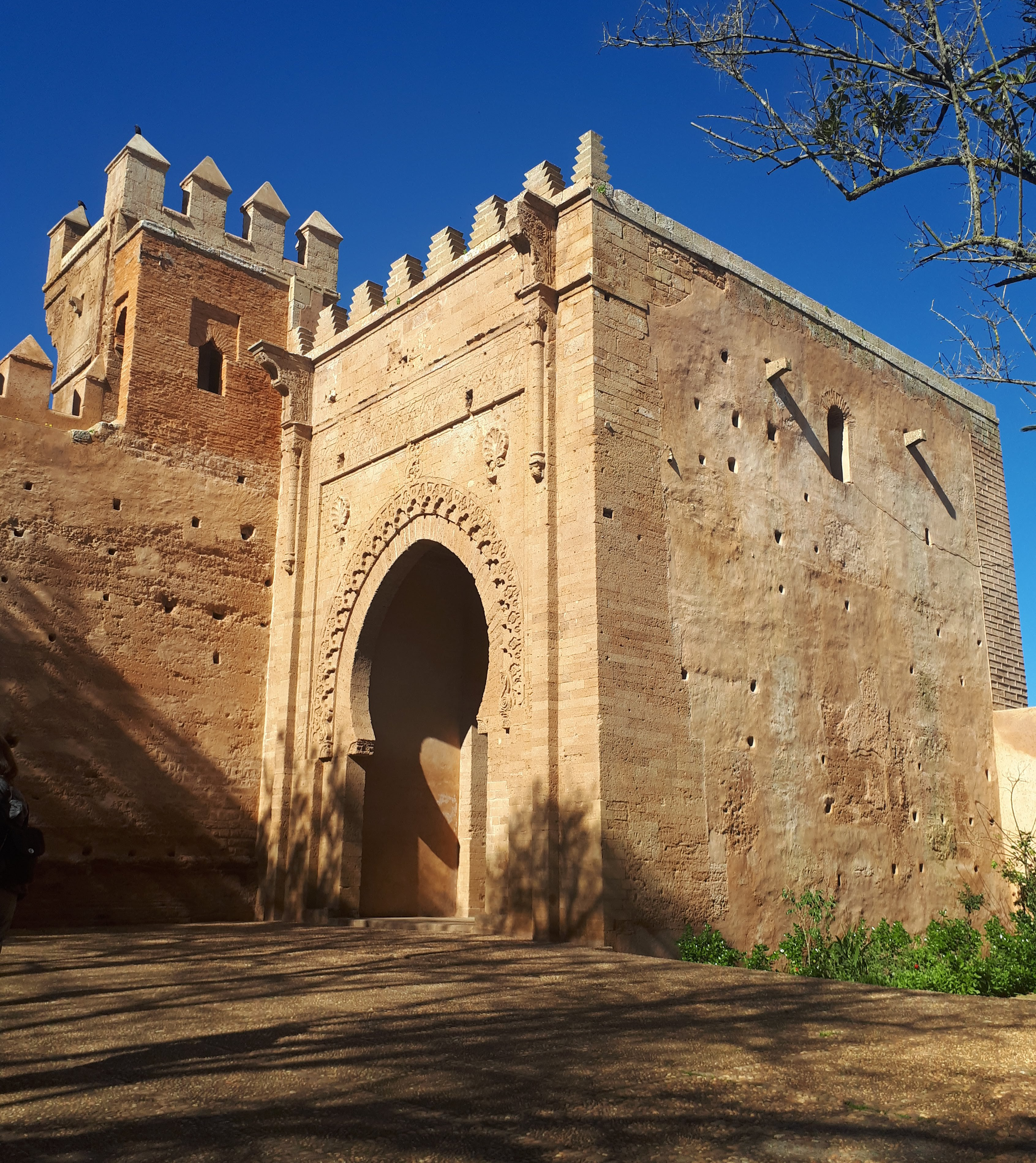 The entrance has been restored 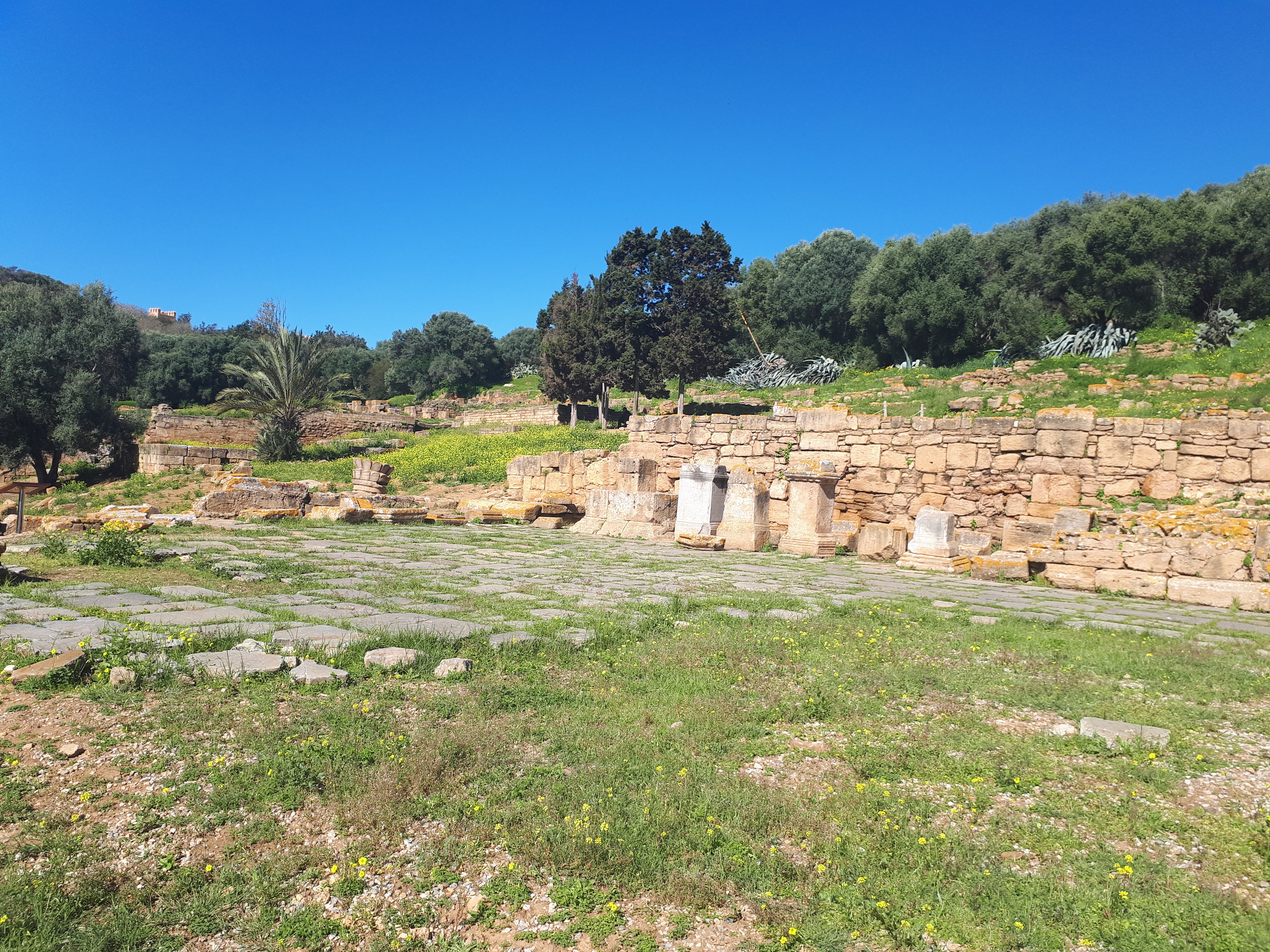 You can wander freely among the ruins

It must have been splendid in it’s day 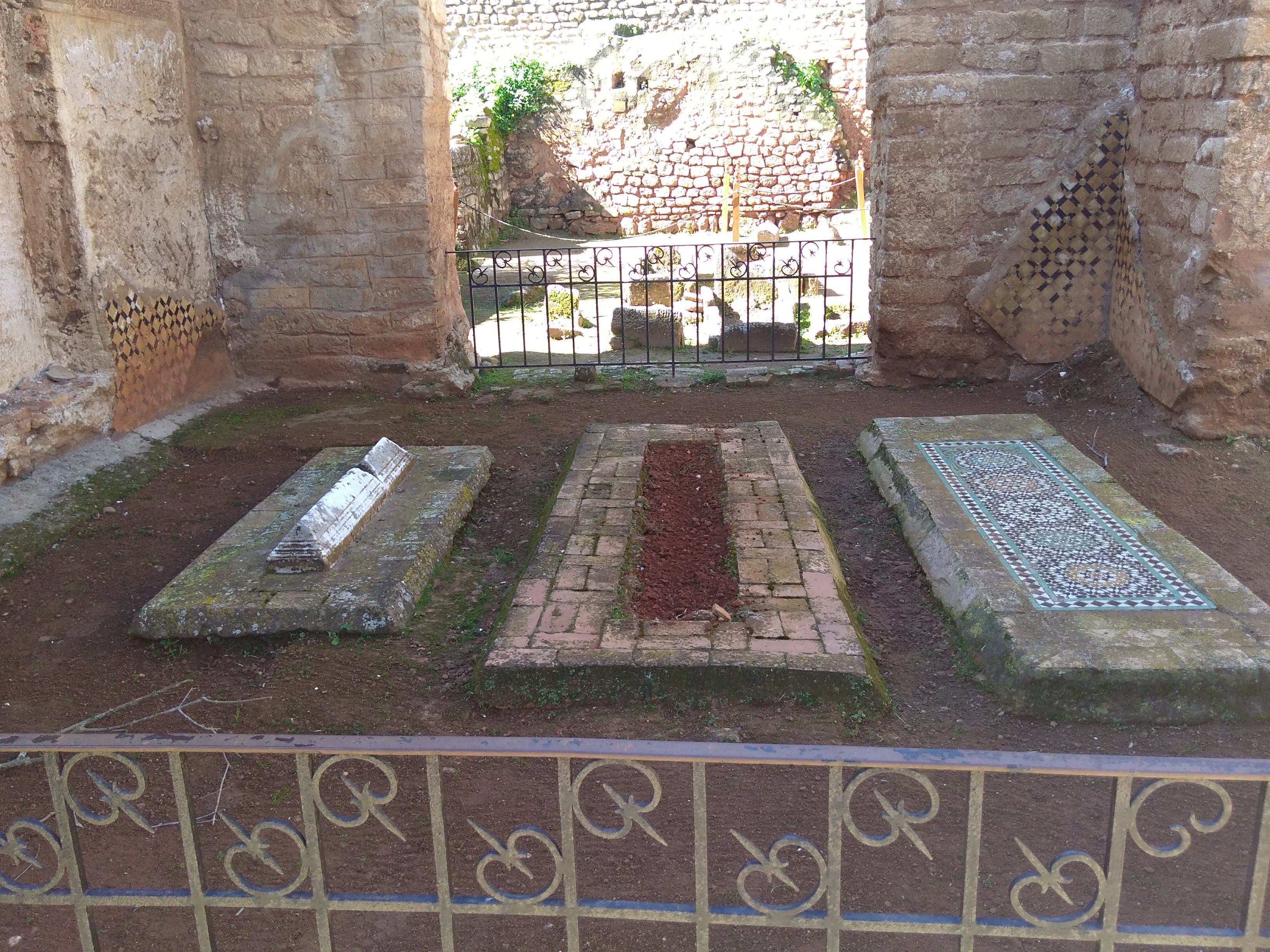 The tombs of Abou al-Hassan Ali and his wife.

If you visit in springtime,  you will hear the clacking ritual of the mating storks.

For the Medina and Kasbah

The walled medina has the usual mix of houses, shops and souqs but there is no hard sell and traders leave you alone to  browse and wander at will.  Through the medina and up the hill brings you to Kasbah Les Oudaias with its Andalusian Gardens and fantastic views. 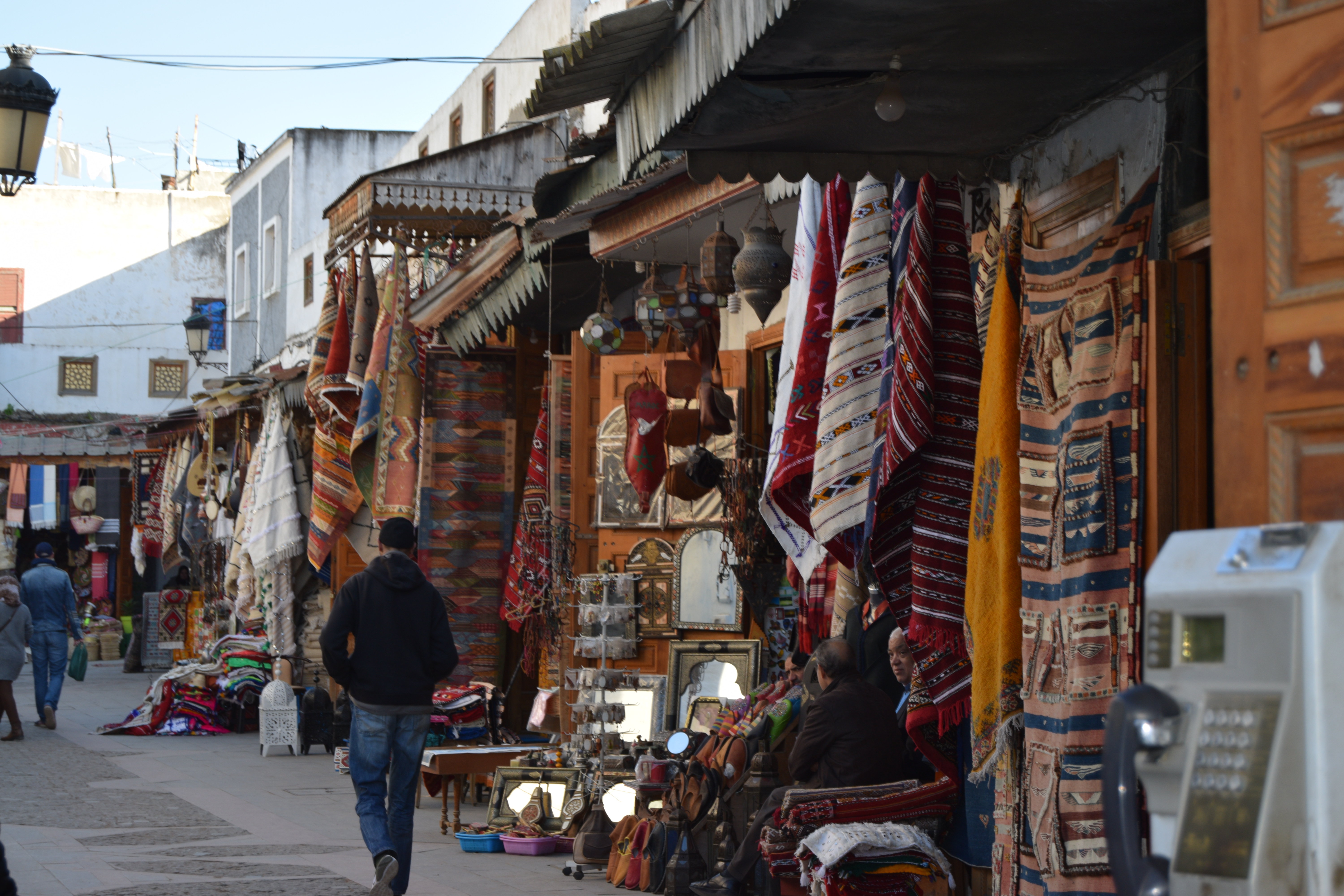 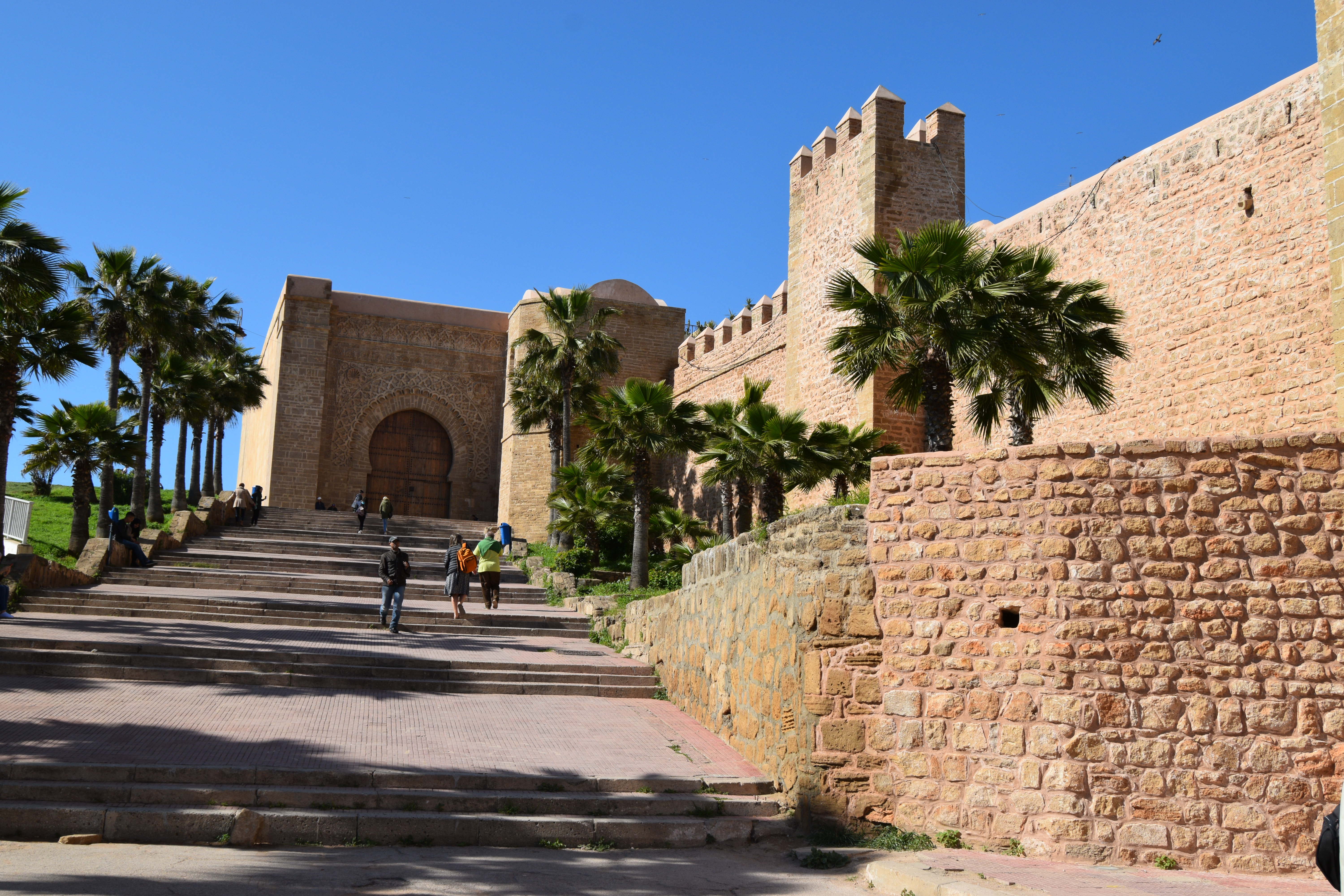 For the Coffee Shops and Biscuits

The Moroccan cafe is still pretty much male dominated but Rabat,  as with all major urban centres,  has street cafes where everyone can feel comfortable.  Of course one has to sample the mint tea… there’ll be plenty of that on your trip… but the coffee is wonderful!  A visit to a cafe should be a leisurely experience… order your tea or coffee with almond biscuits and enjoy your time out from sightseeing.

(Cafe Maure in the Kasbah.  Mint teas and almond biscuits (try the lemon one!!) are circulated on trays on the outdoor terraces.  Sit and enjoy the views like Tom-  or swot up on your research like me!)

Le Tour Hassan is the unfinished minaret of what was to be the largest mosque in the world but was never completed.  Only the tower and pillars have withstood the march of time.  There’s no access to the tower but its worth a visit for photos and for the views of Rabat and nearby Sale across the river. 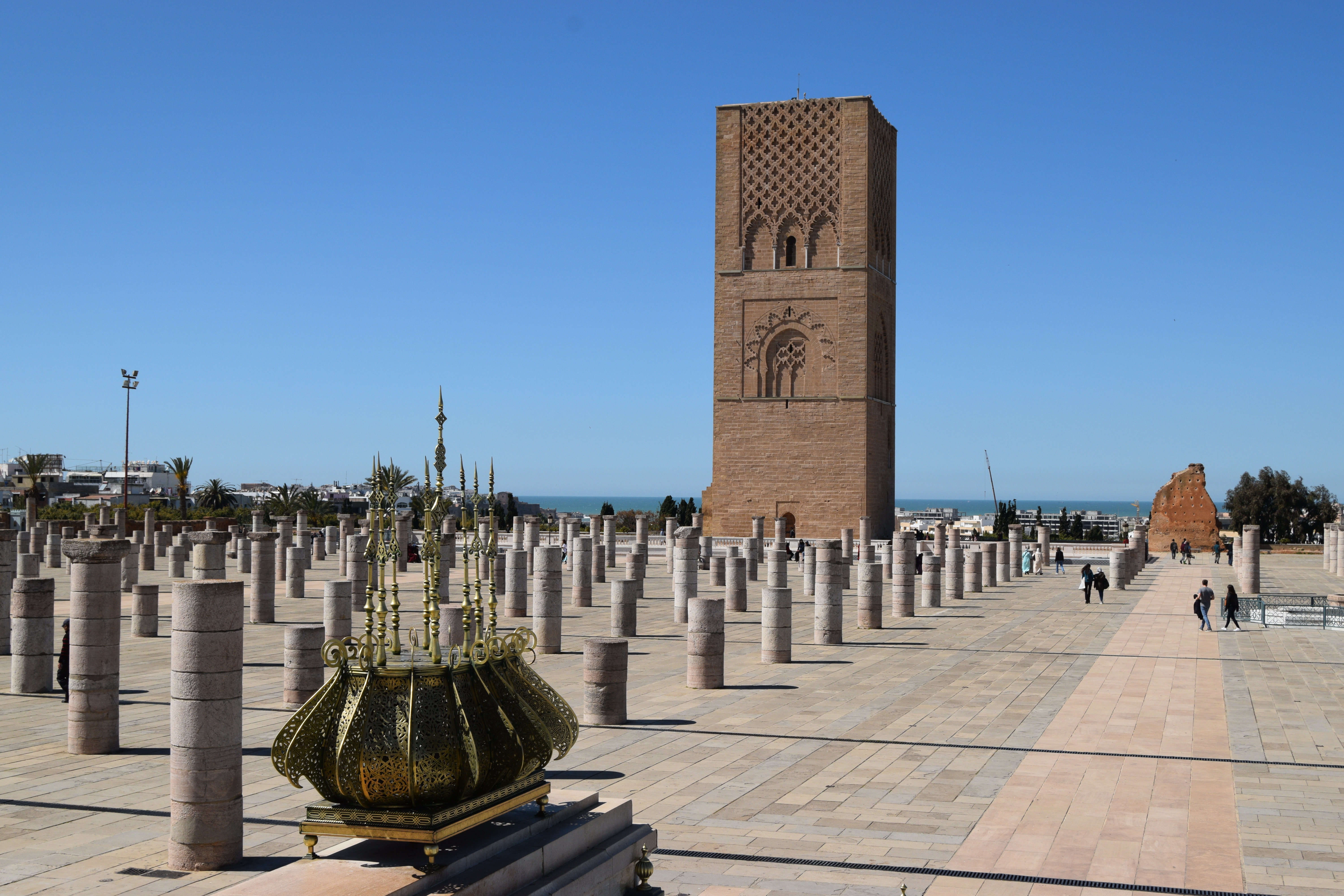 Mausoleum of Mohammed V is located beside Le Tour Hassan.    The beautifully detailed and designed mausoleum was built just in the 1960’s and serves as both a tomb and mosque.  It is open to all visitors. 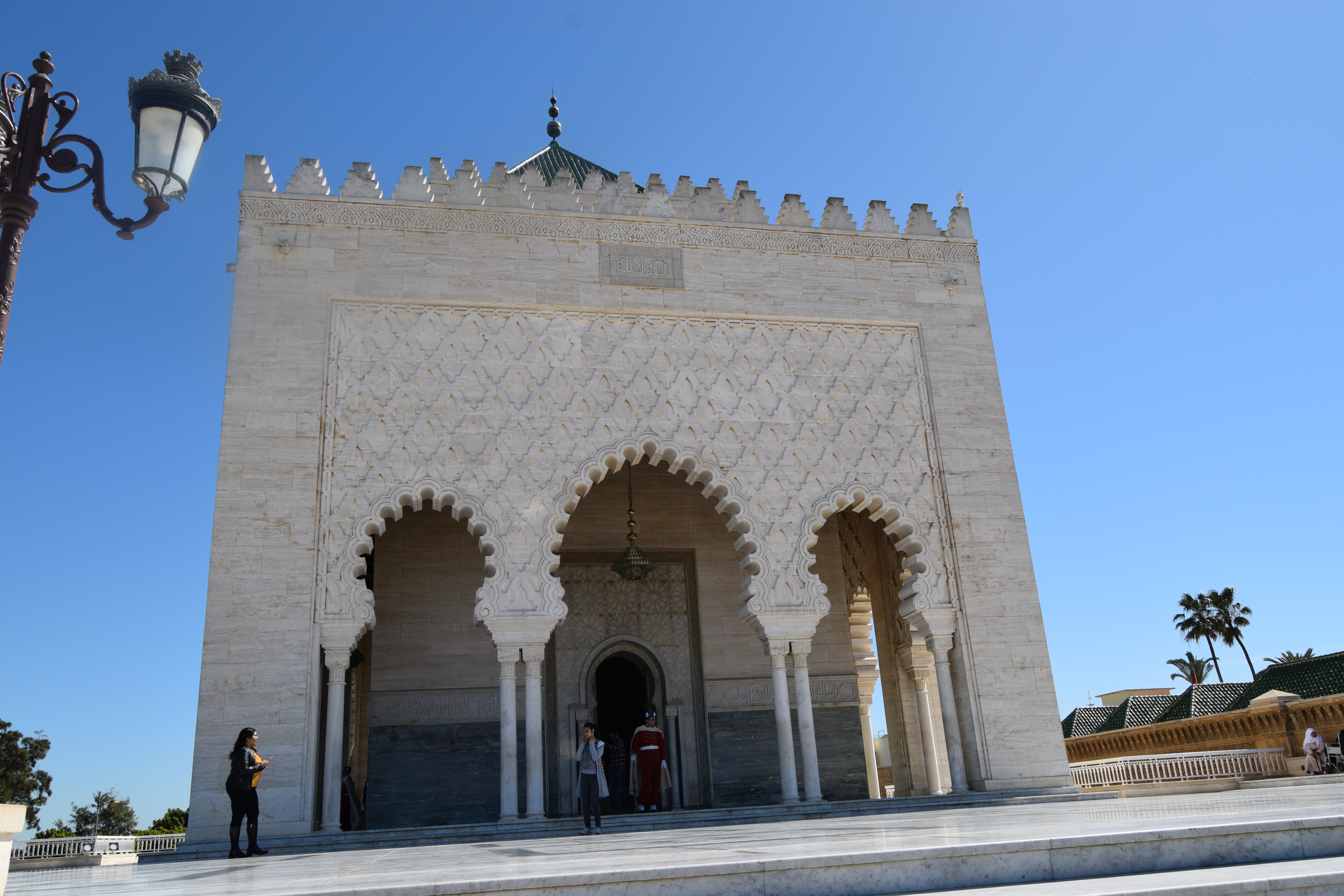 (Details from the exterior and interior of Mausoleum of Mohammed V)

For the River Walk and Views

Oued Bou Regreg enters the sea here between Rabat and neighbouring Sale.   This section of the river is a hive of activity and a lovely place for walks. 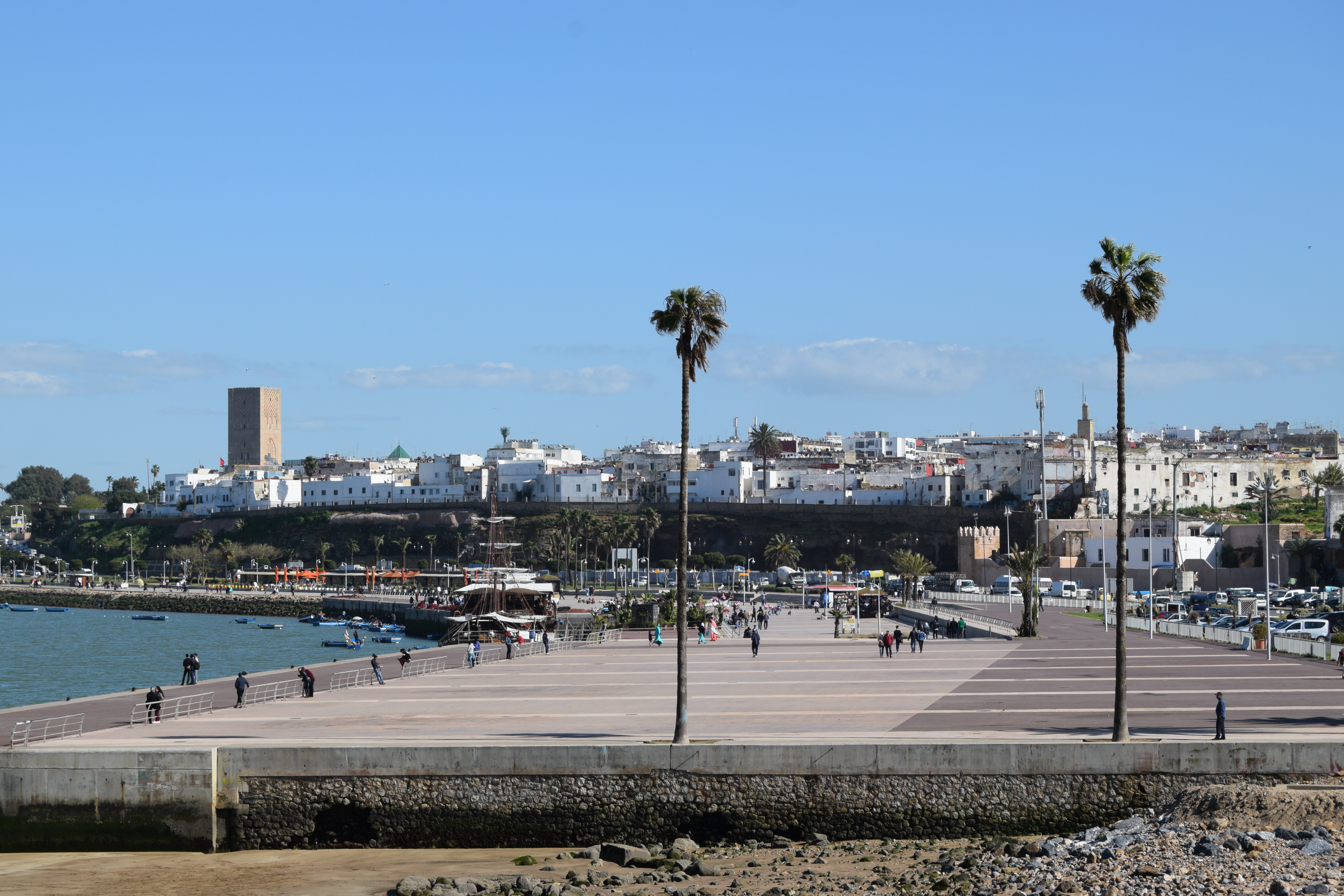 (By the river,  looking towards Le Tour Hassan) 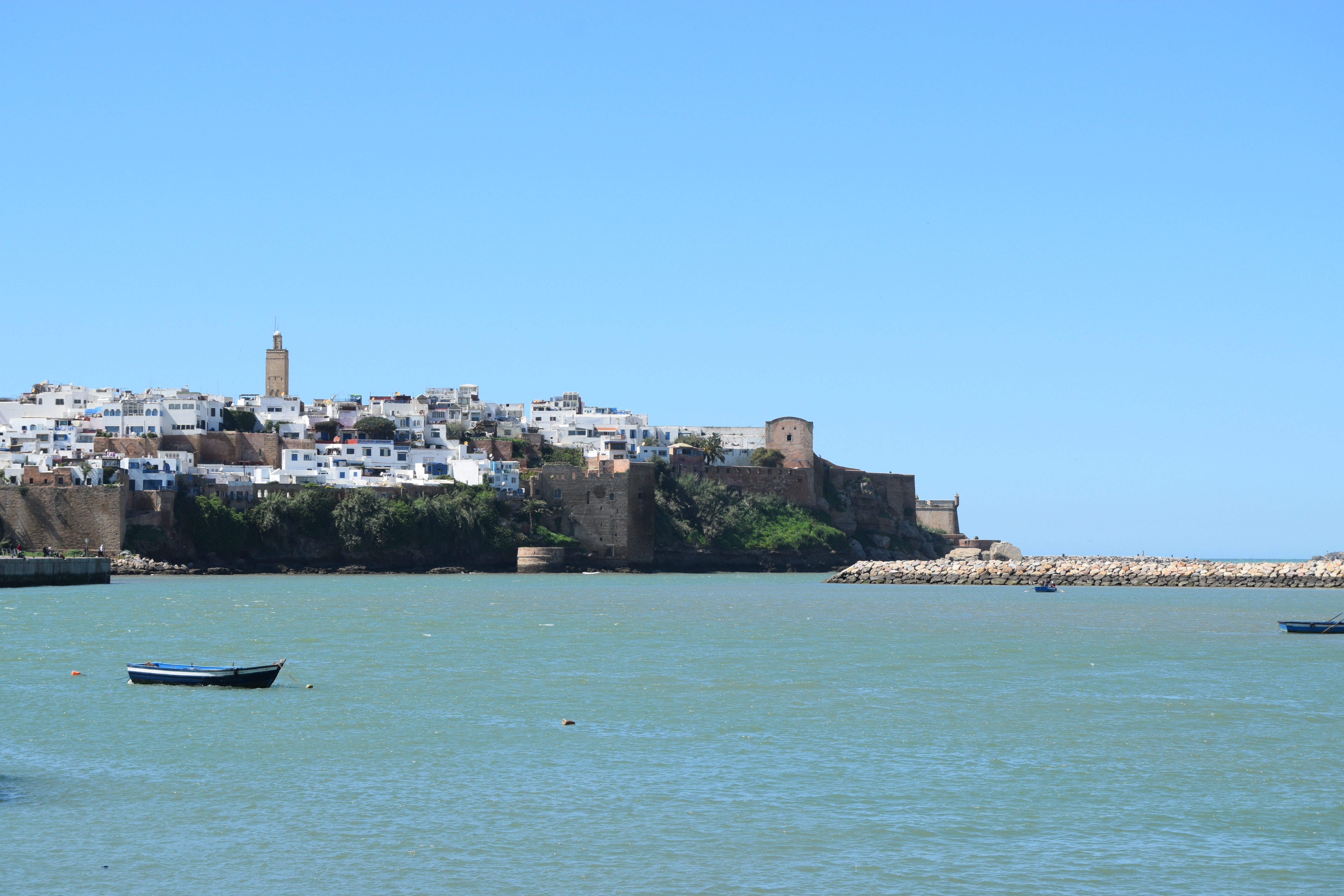 (Turn around and look back toward the Kasbah) 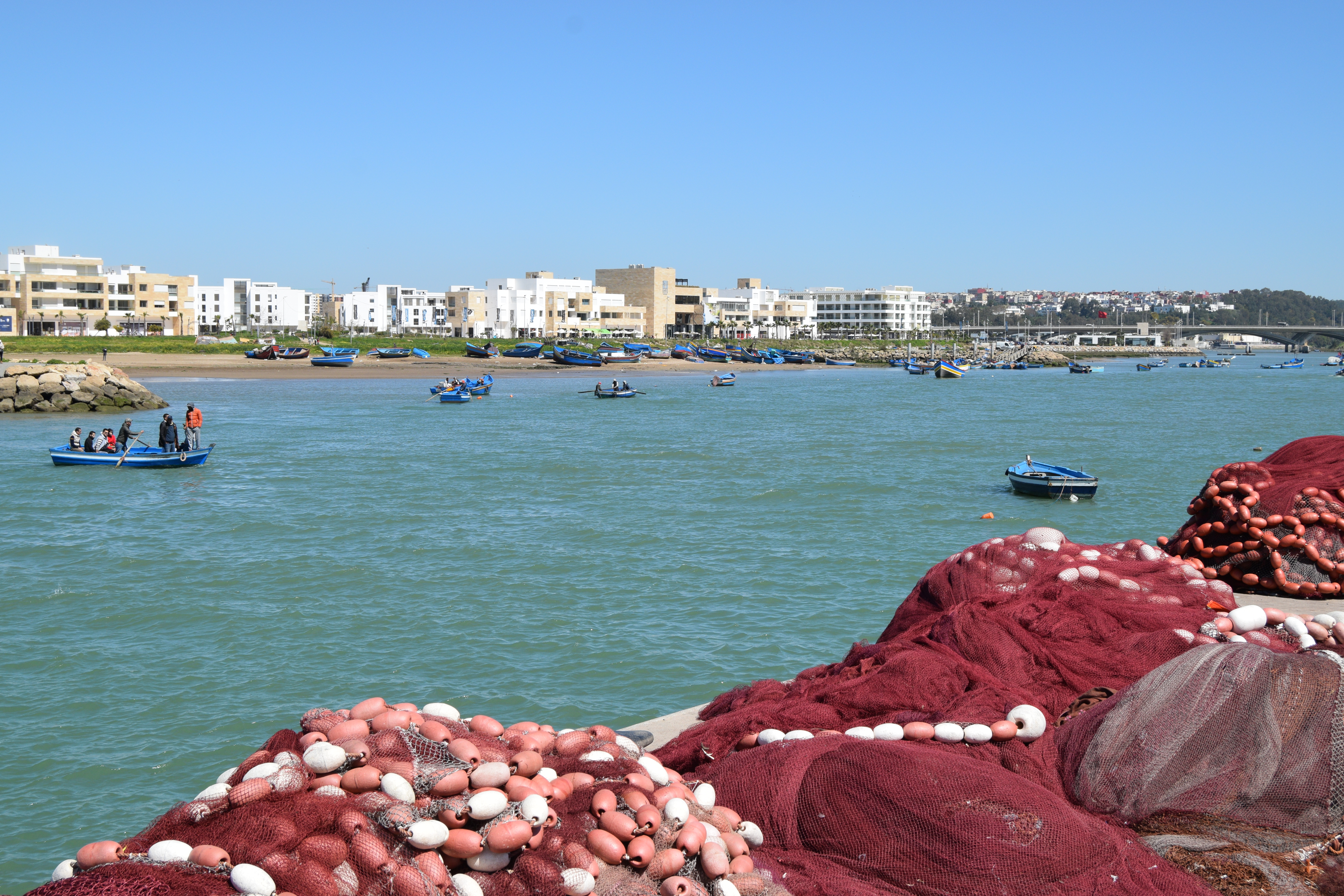 (Catch a rowing boat taxi across to Sale)

Rabat has a great selection of restaurants.  From the food stalls inside the medina, to the gourmet Riad dining rooms,  there’s something for every pocket.  And of course,  if you’re really desperate,  yes you can get a burger!   Many restaurants serve wine.

(Le Petit Beur – chicken cous cous topped with onions and raisins.. And look at that bread!!)

16 thoughts on “Is Rabat Worth a Visit? Definitely!”