If you’re looking for a cheap mini break then Bratislava is certainly worth considering.  The capital of Slovakia (don’t mix it up with Slovenia – they don’t like it!) is just about an hour by train from Vienna and a popular day trip destination from that city but there’s enough to occupy you for a night or two.  Due to cheap flights and booze,  its a popular stag party venue.   We weren’t there on weekend nights so I can’t comment on the impact of that industry on the reputation of the city except that it seems to be pushing prices up.   Also worth considering is the timing of your visit.   While snow is beautiful and picturesque,  it doesn’t allow for sitting outdoors in a lovely square and enjoying a coffee or beer!

The city centre is very walkable and there’s plenty of accommodation,  restaurants and coffee shops.

Michael’s Tower marks the only remaining gate of the original fortifications.   It houses the Museum of Arms and offers great views of the city (weather permitting of course!).  Under the arch is Kilometre Zero which measures distances to global cities. 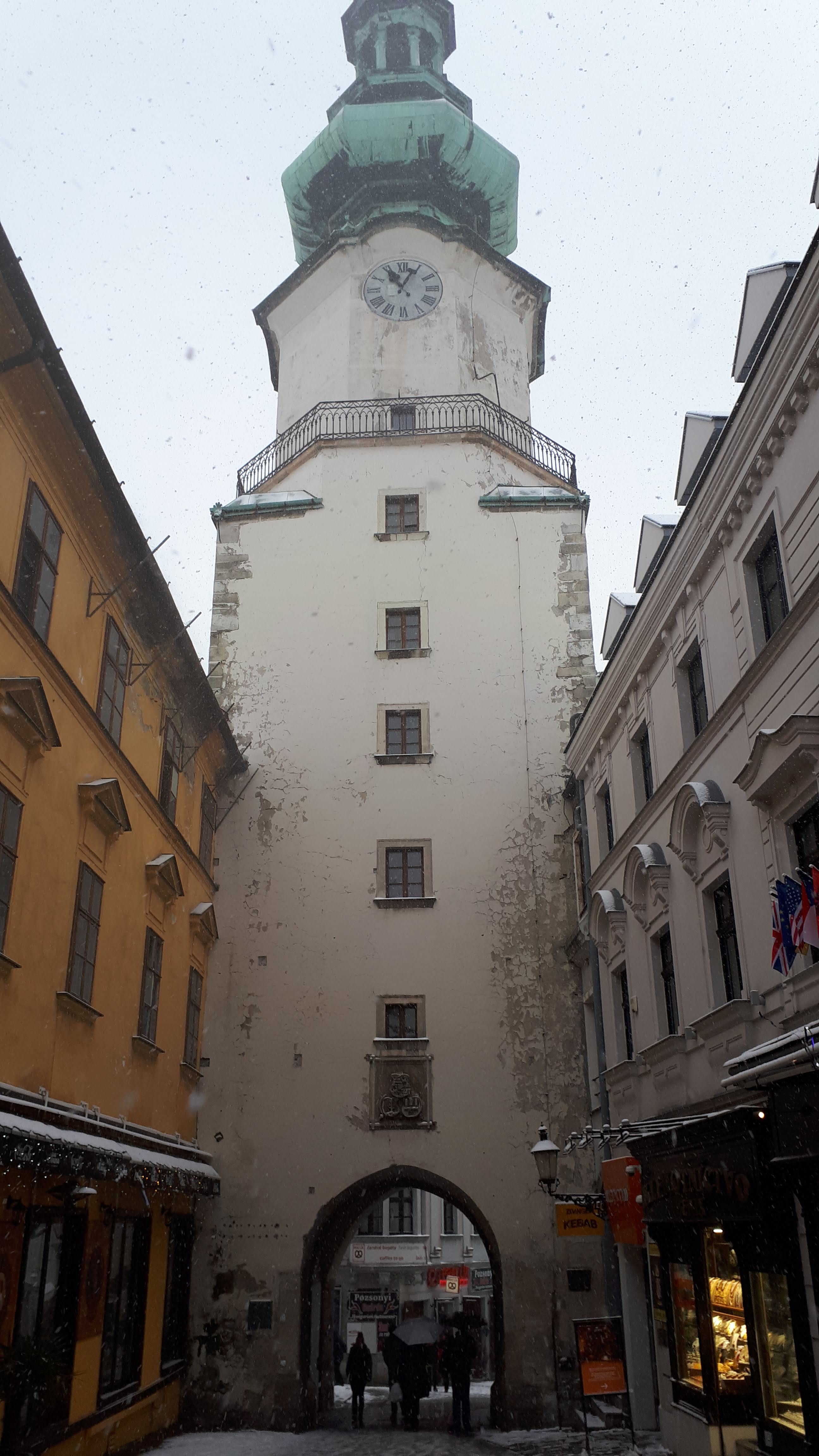 A little further on is the rather uninteresting Stone Korzo – it marks the beginning of the Korzo  or promenade from where families traditionally strolled down towards the river. 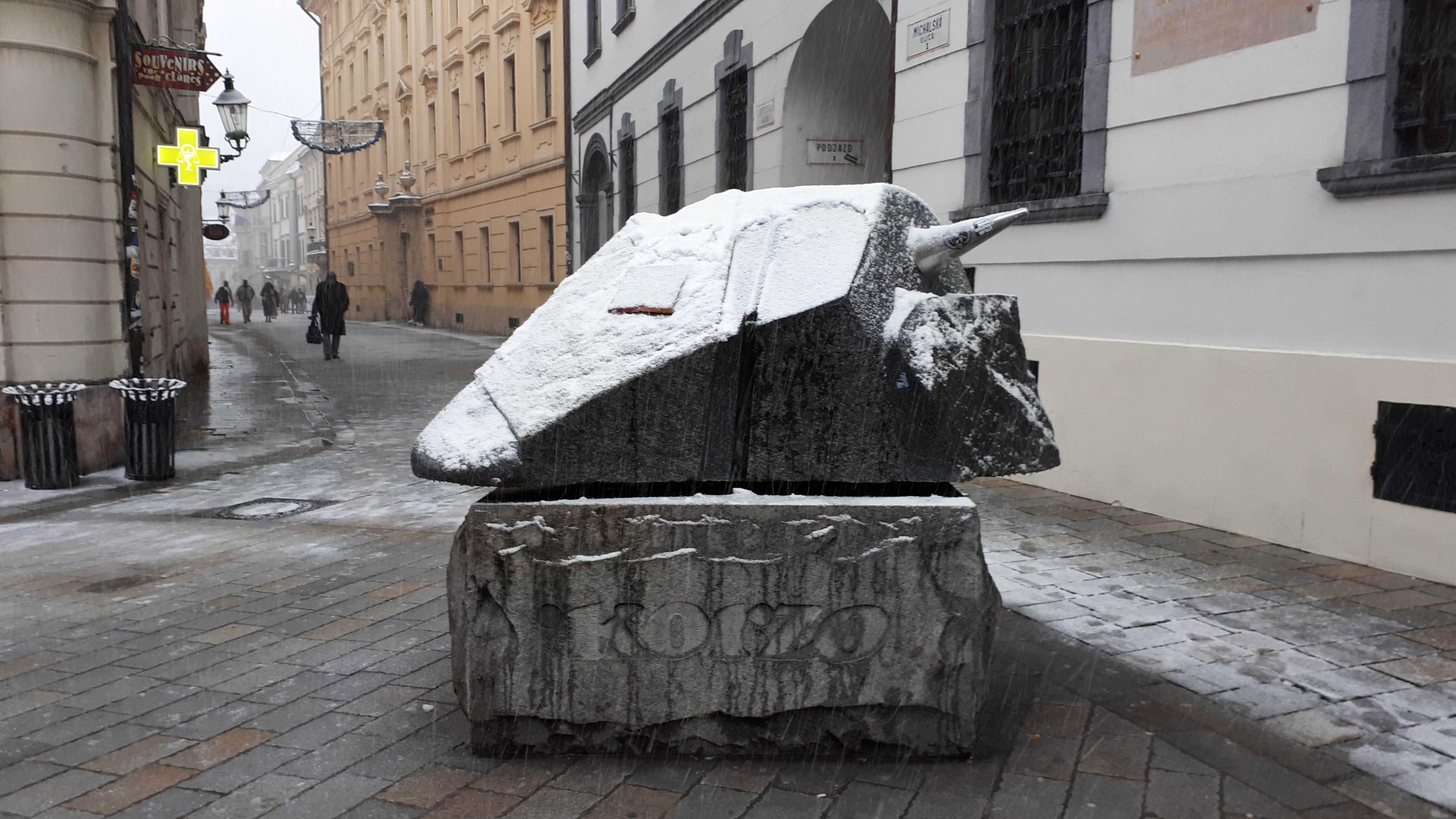 178 brass crowns in the pavement mark out the coronation route taken by newly crowned kings.   The tradition has been revived with the Coronation Bratislava Festival every September.

The Old Town is compact and walkable with lovely streets leading off into narrow cobbled lanes and courtyards. 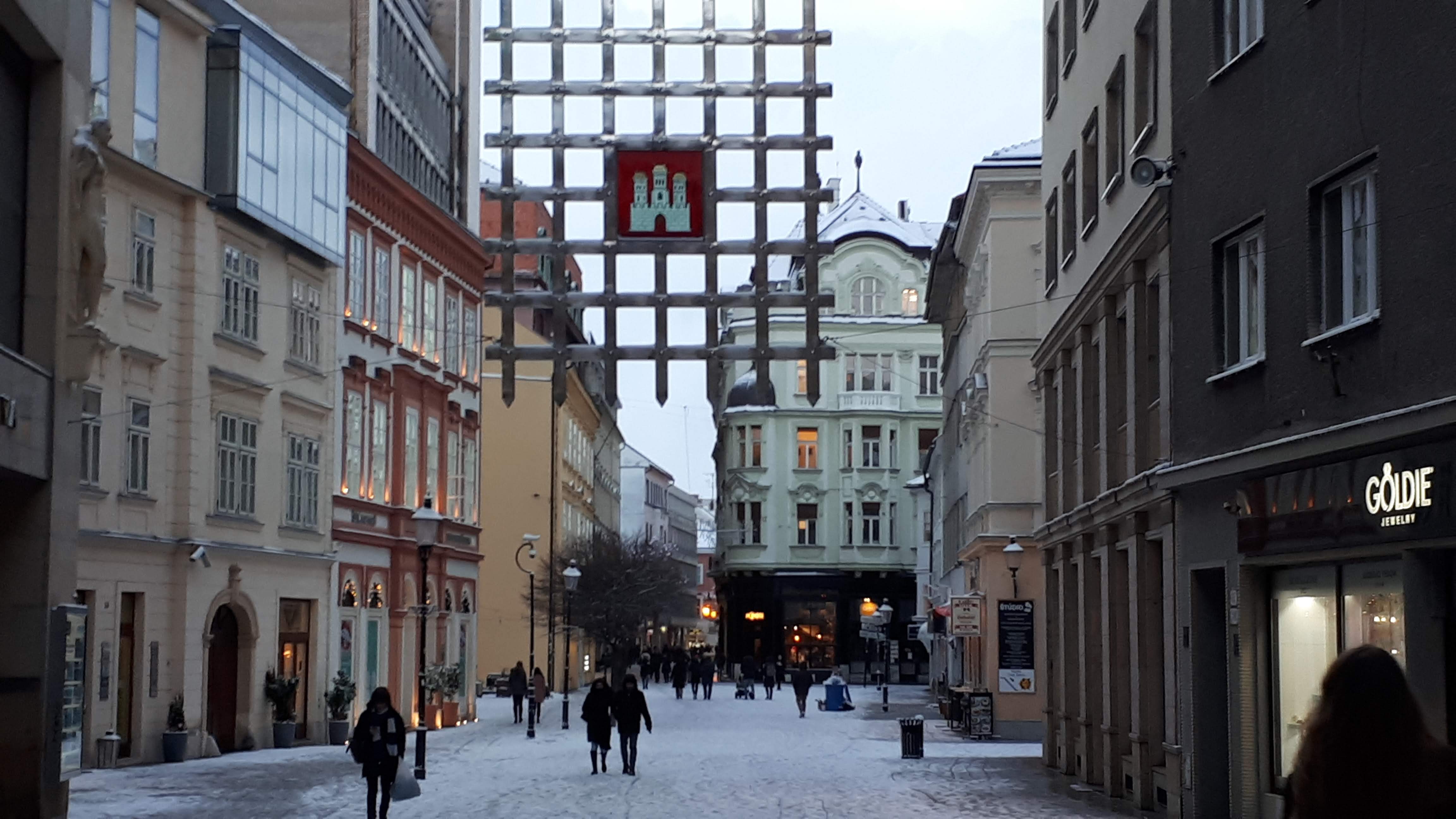 Hlavné Námestie – the 13th century Main Square is historically the most important part of the city.  The yellow tower is part of the Old Town Hall.

The snow is hiding the lovely roof at the back of the town hall.. 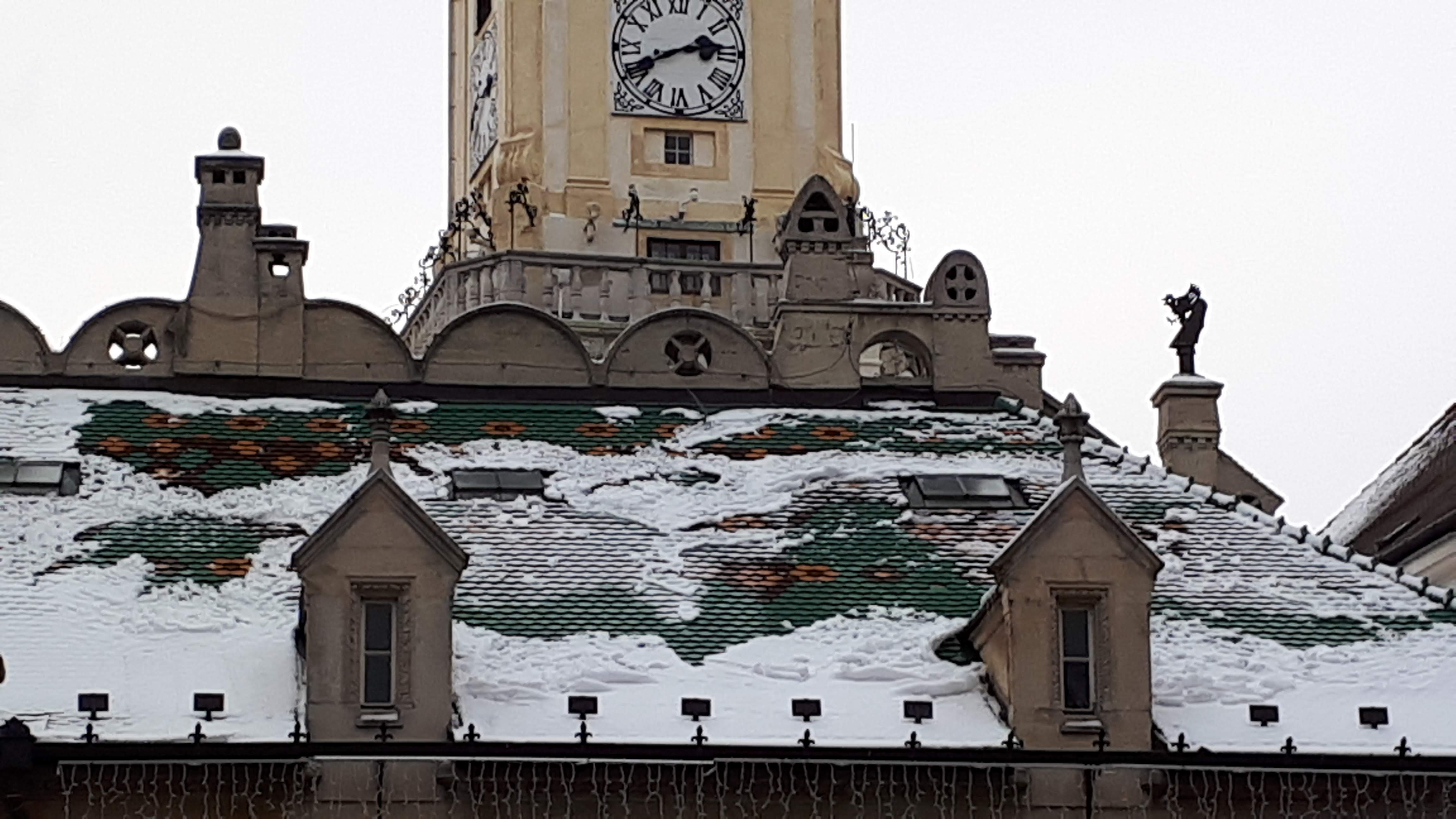 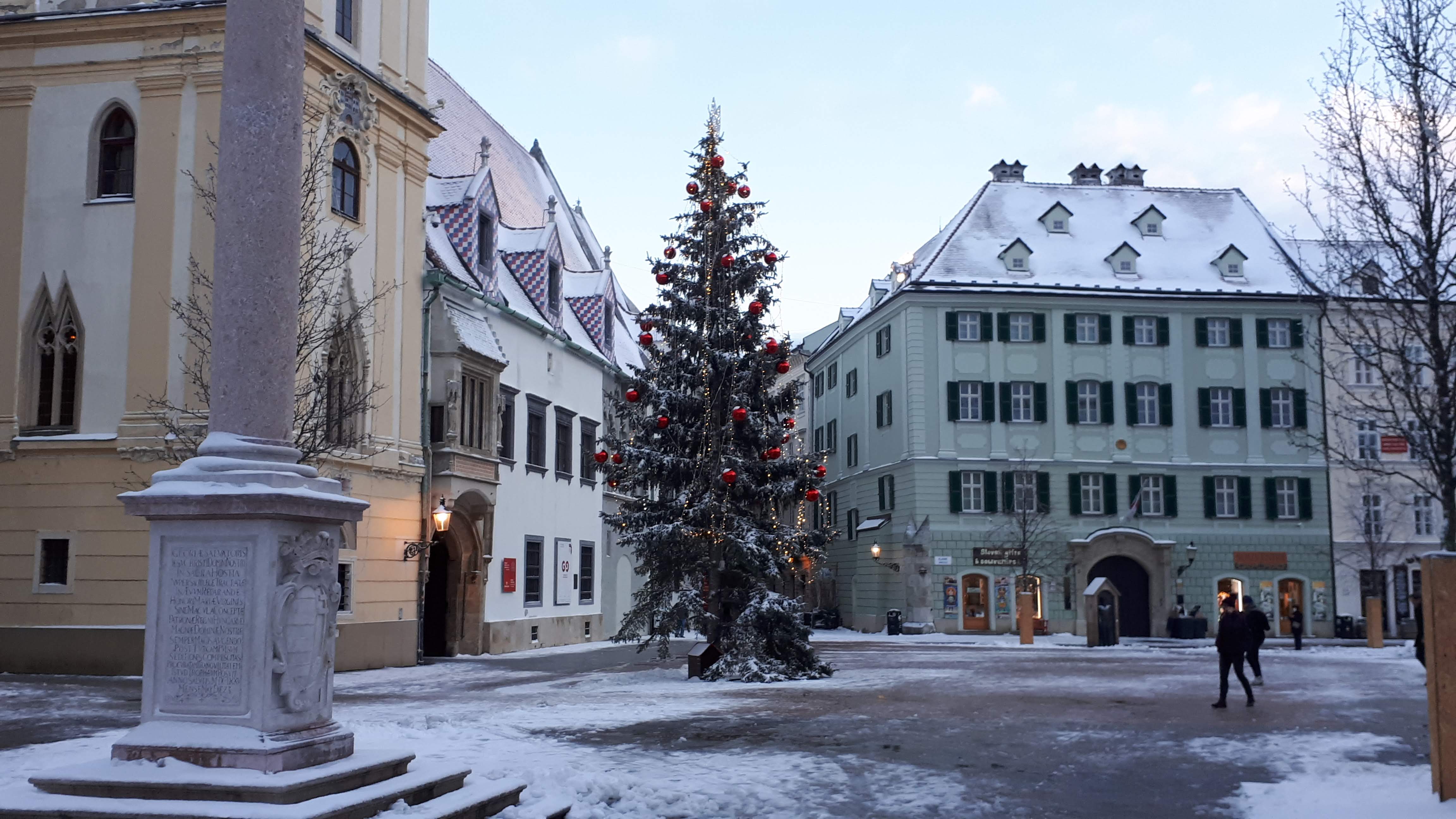 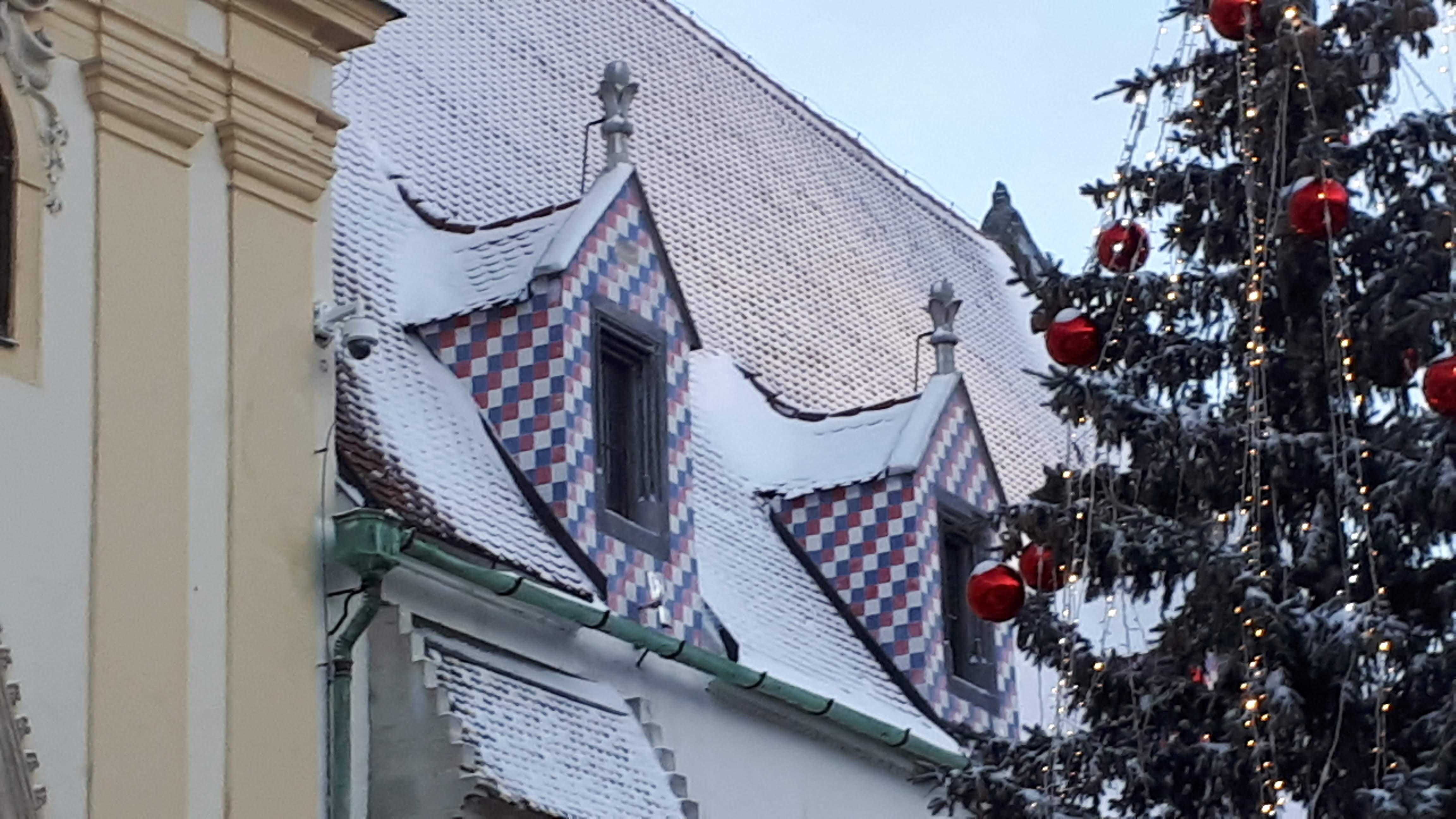 Close by is the Primate’s Palace.  You can go inside to see the Hall of Mirrors.

Cumil is Bratislava’s most famous piece of art! 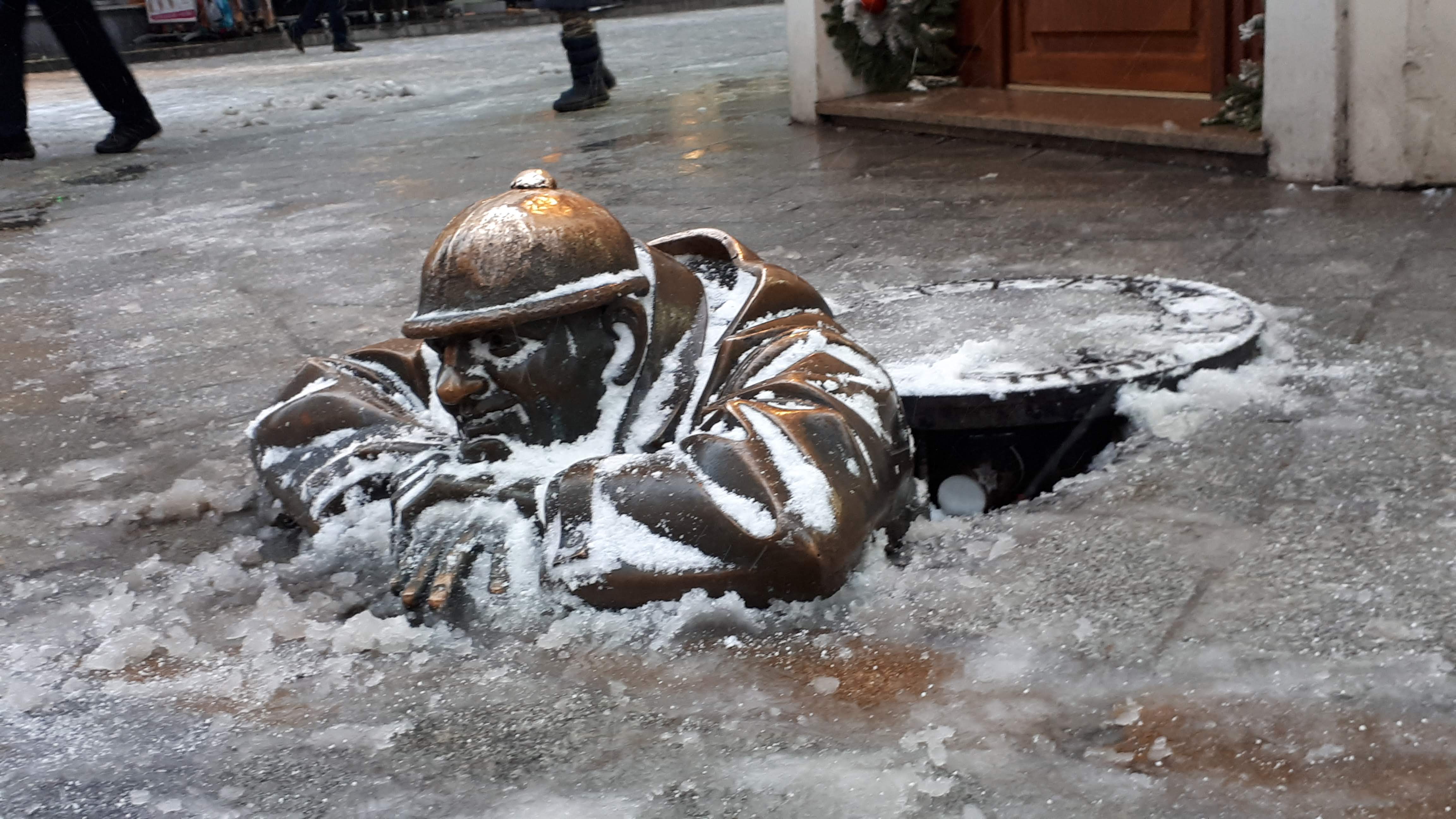 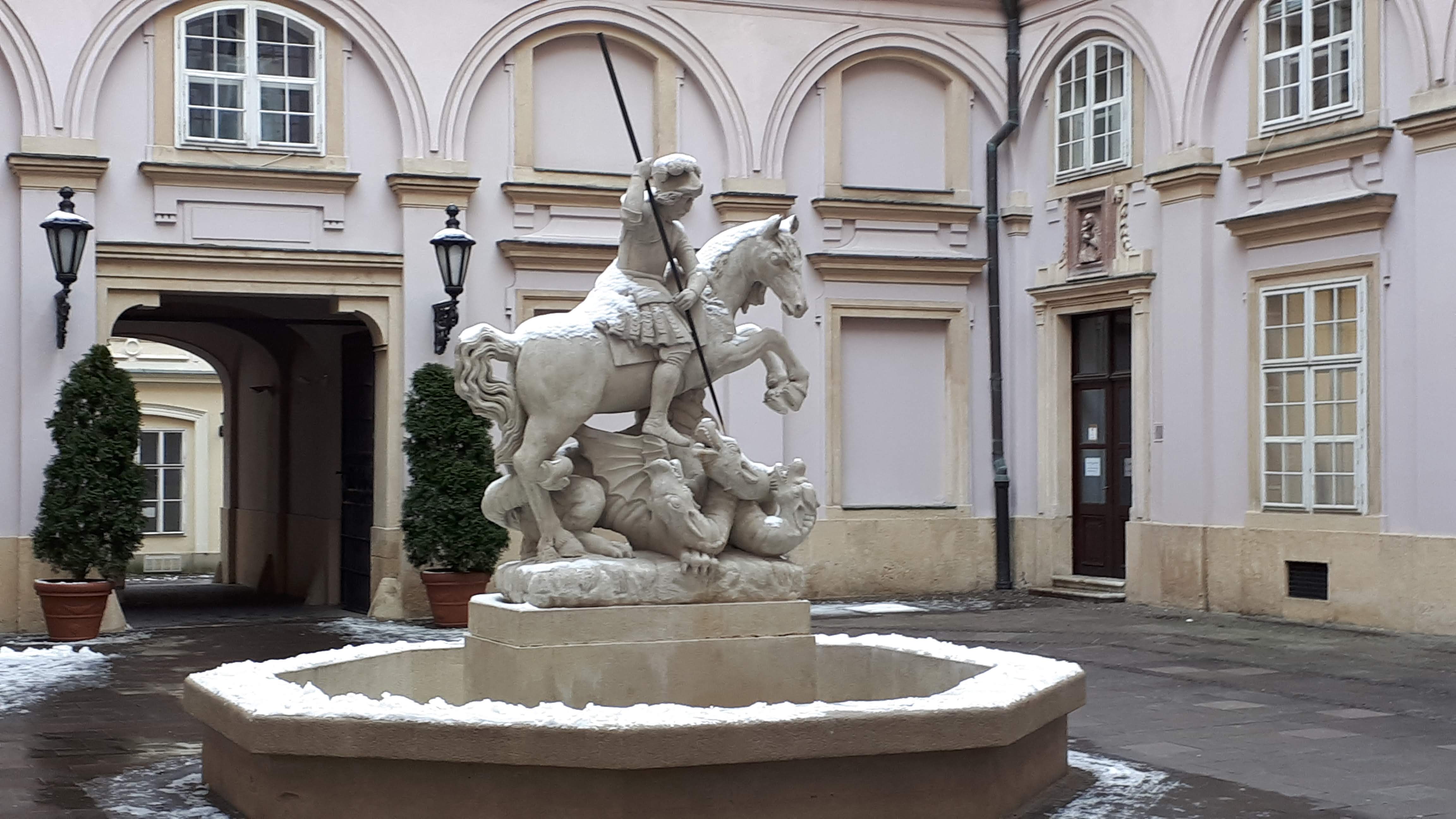 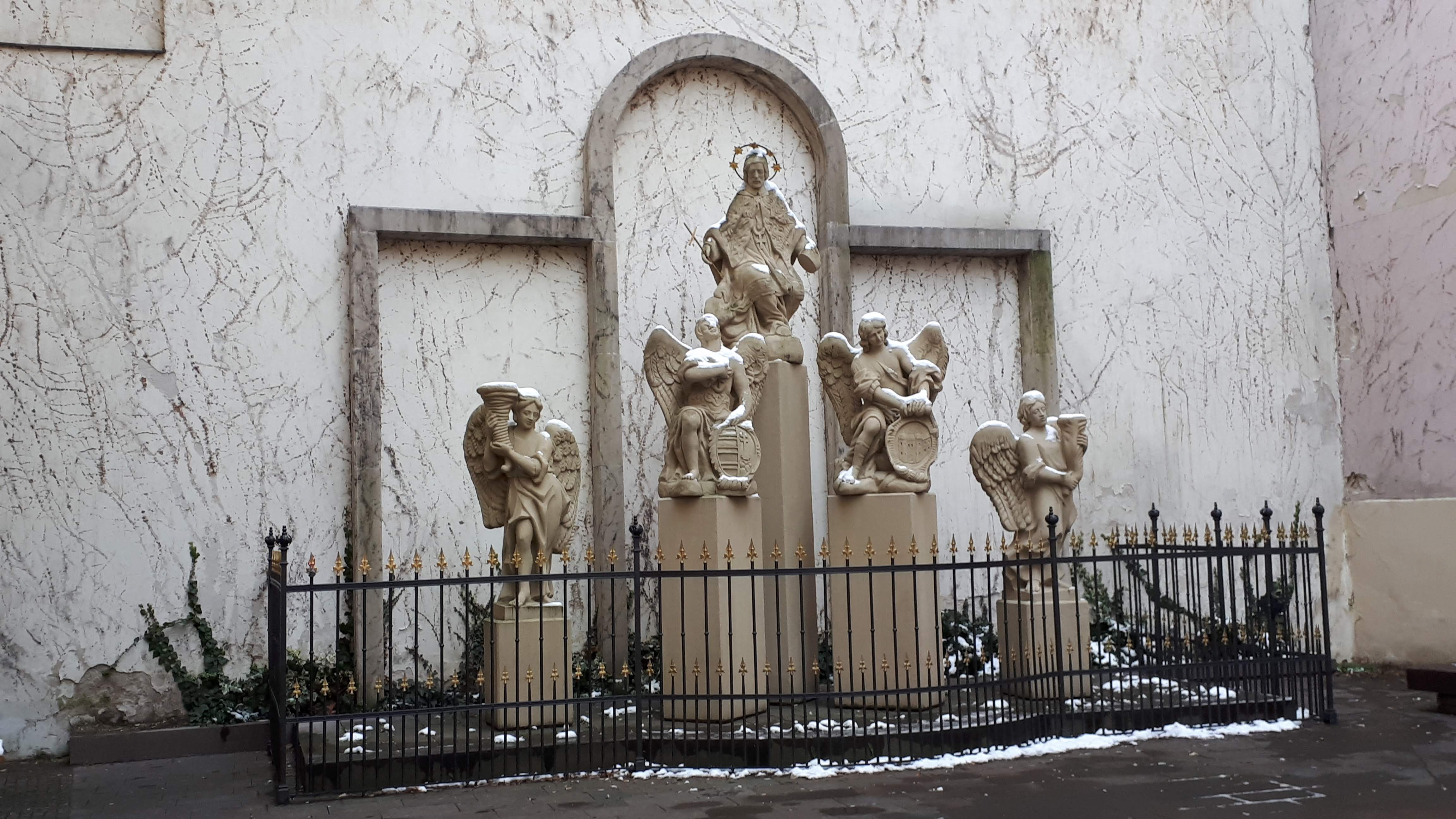 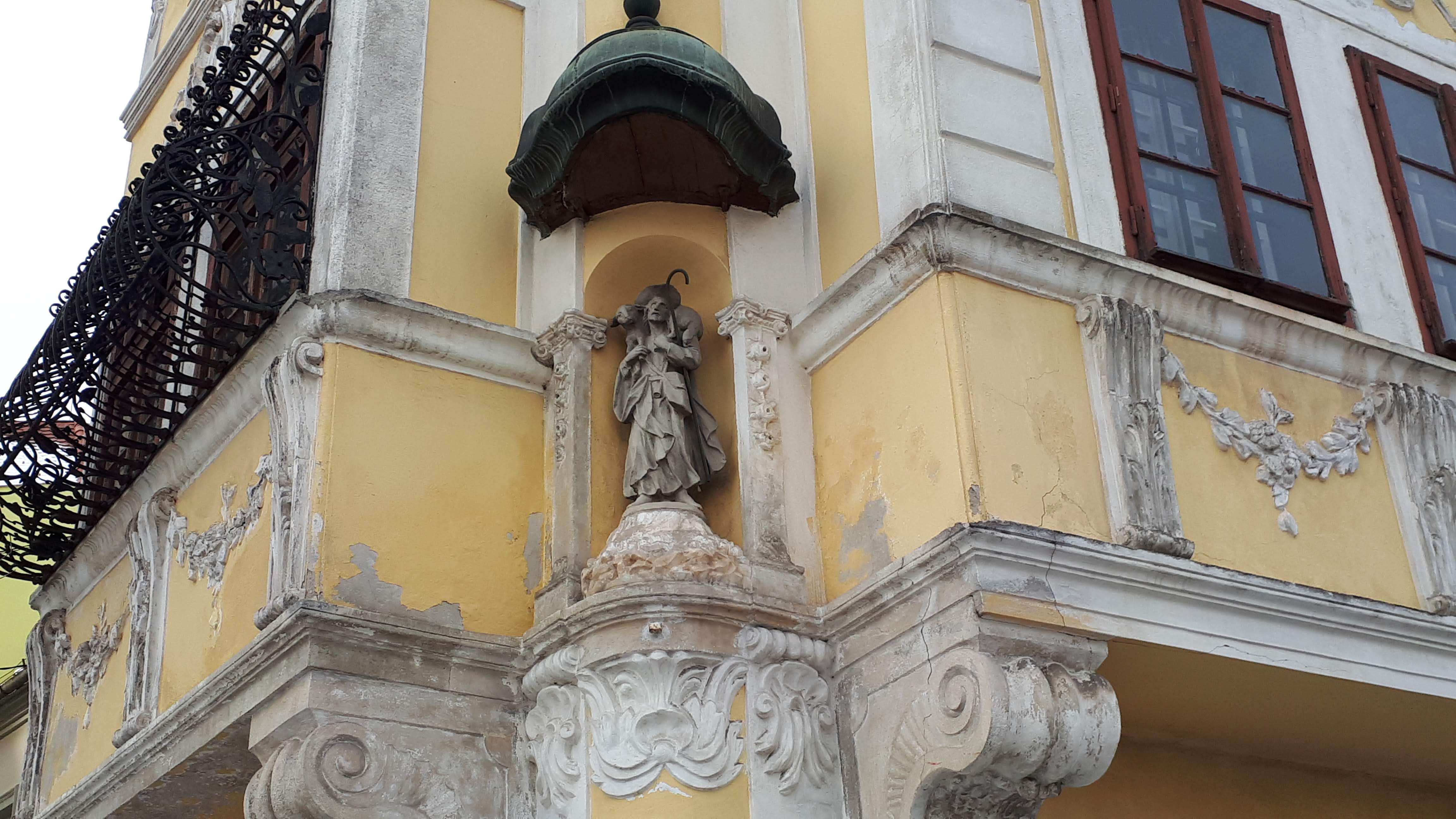 Hviezdoslavovo Námestie – this big open space is home to the Opera House and the Slovak Philharmonic as well as hotels and restaurants. (Its also the location of the US embassy which has had to add security fencing along the side of the park). 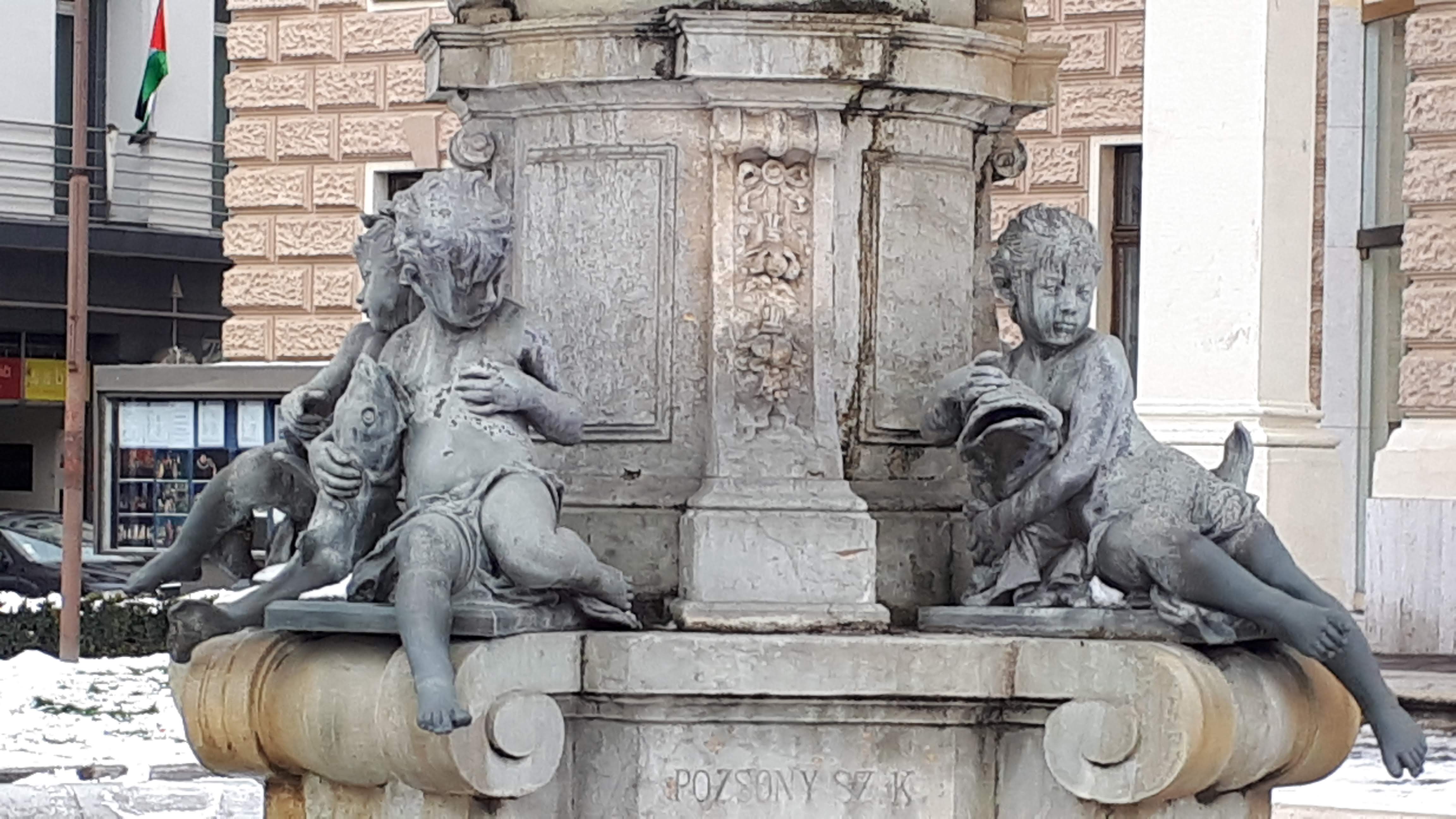 The square is named after the poet Pavol Országh Hviezdoslav.   That’s not his only honour though – many Slovak towns have a street called after him and minor planet 3980 is named Hviezdoslav!

Parts of the old walls can still be seen close to the main road.

The cathedral is the largest and one of the oldest churches in Bratislava.   The tower was built into the city walls.

As the site of 19 coronation masses for Hungarian royalty,  the steeple is topped with a crown rather than a cross.

St. Martin on horseback,  giving half his cloak to a beggar. 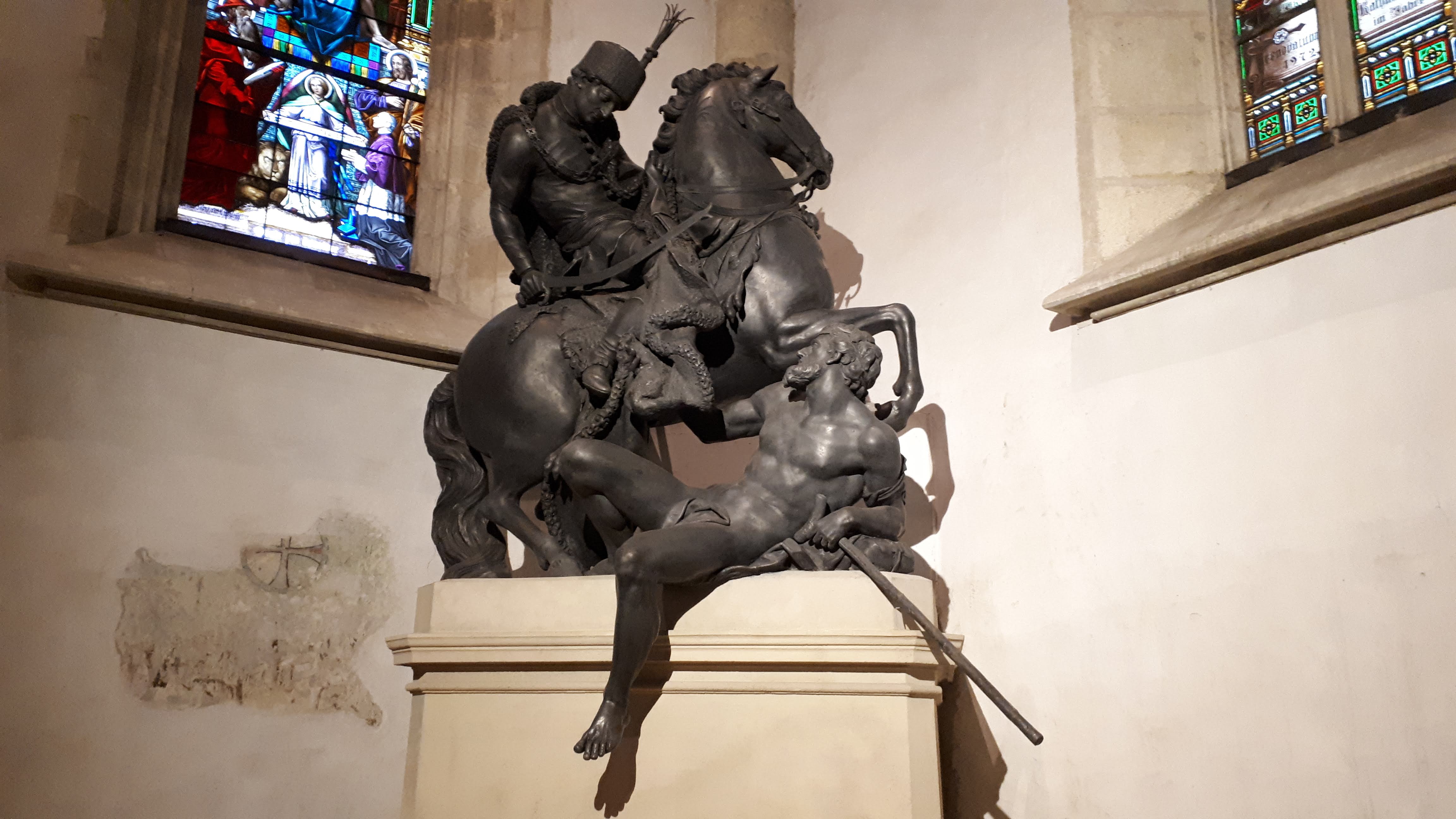 The Art Nouveau Church of St. Elizabeth is painted blue both inside and outside. The rose motif was used a lot in the decoration.  Legend has it that Elizabeth’s family disapproved of her tending the sick and needy.  One day when carrying bread to the poor,  her husband stopped her and asked what she carried under her apron.  She claimed it was roses.  When he checked under the apron,  the bread had changed to a bunch of roses!

Bratislavsky Hrad is the city’s most famous landmark.   Built on a hill overlooking the Danube,  there have been fortifications on the site dating back to the Celts and Romans.   Once a grand palace of the Austrio-Hungarian empire,  it served as an army barracks before gradually falling into disrepair and was then badly damaged in a fire in 1811.   Restoration work began in the 1950’s.

You don’t have to go inside – paths take you through the grounds and around the walls where you can enjoy views of the town and river. 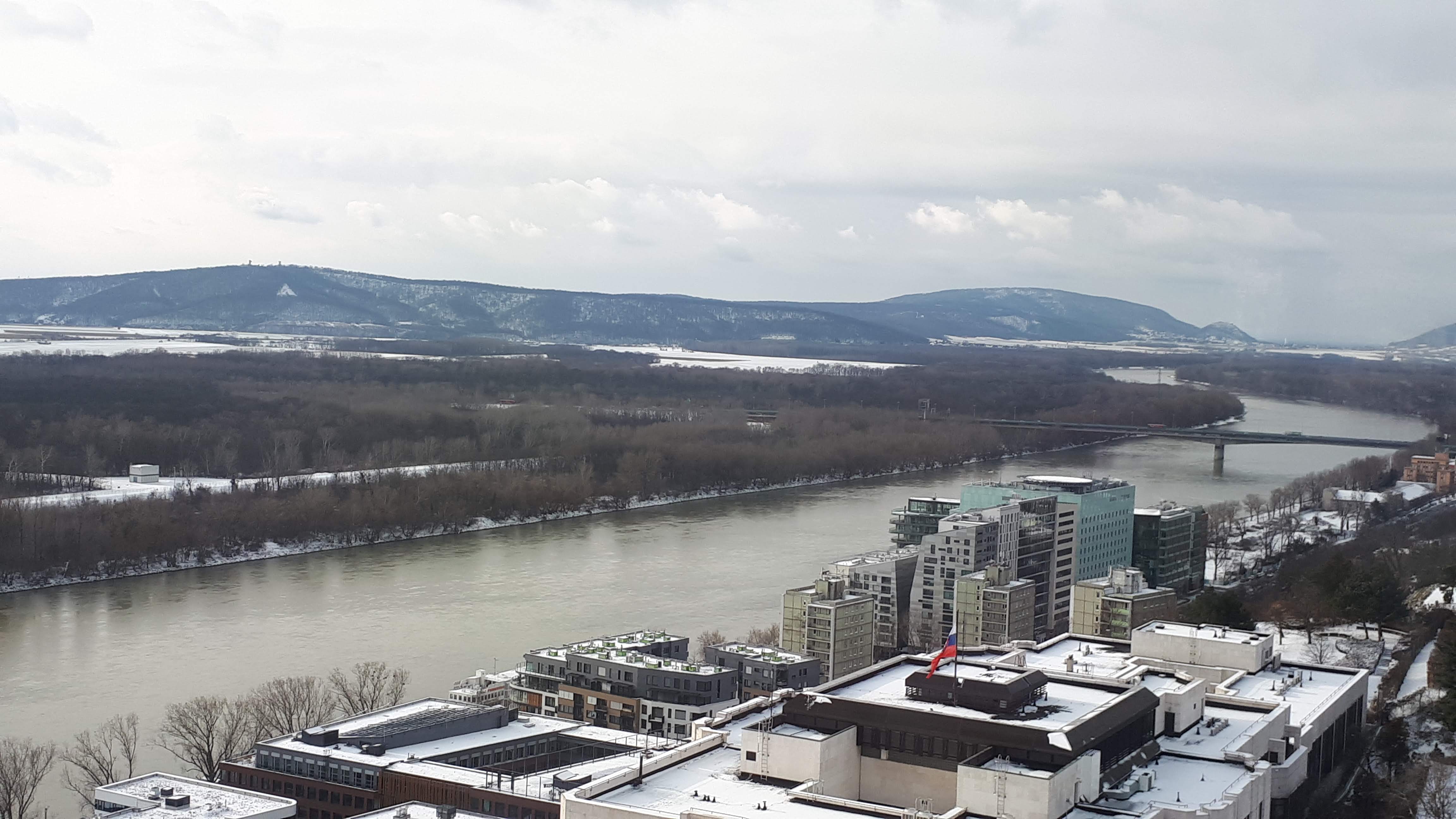 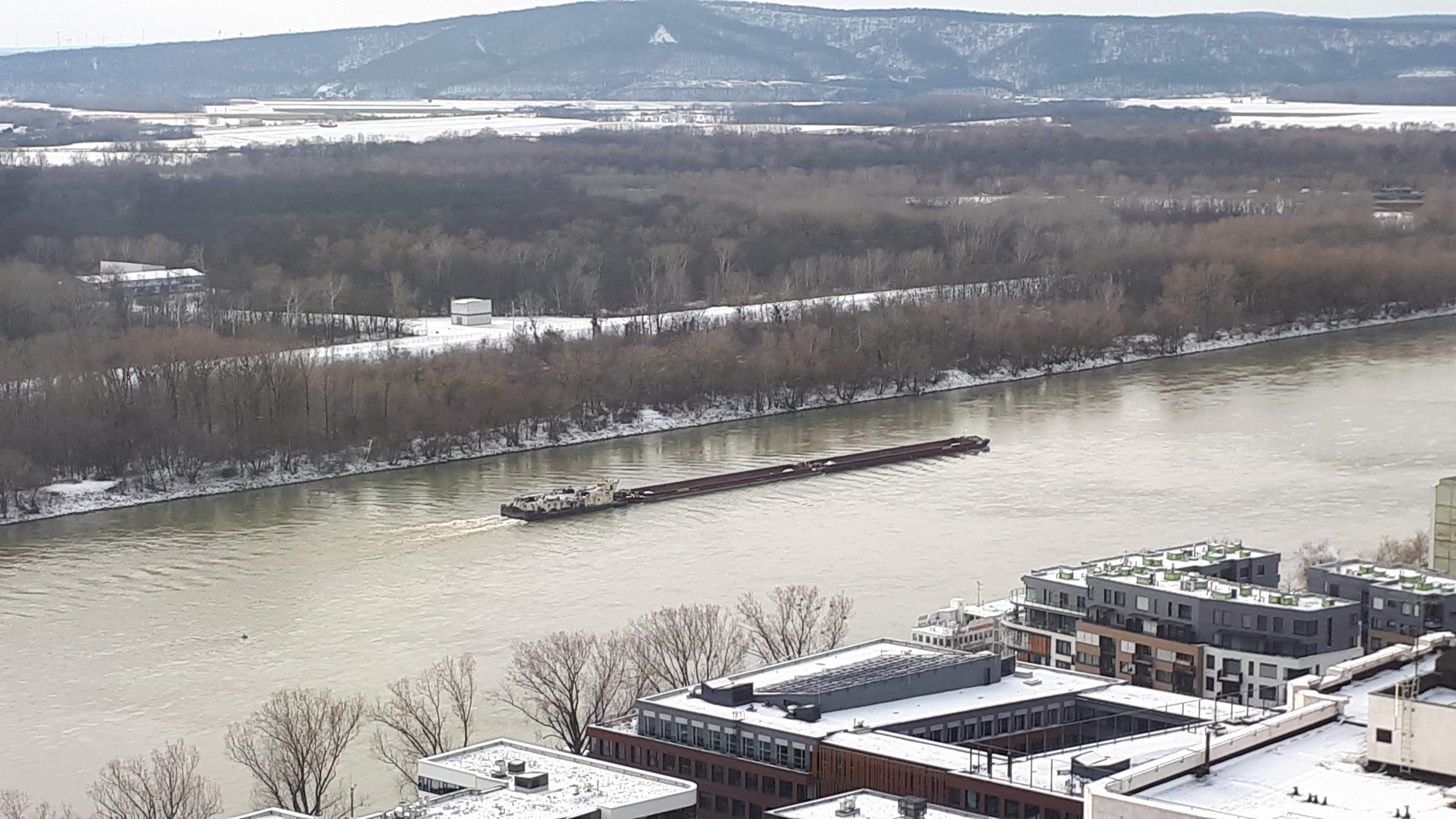 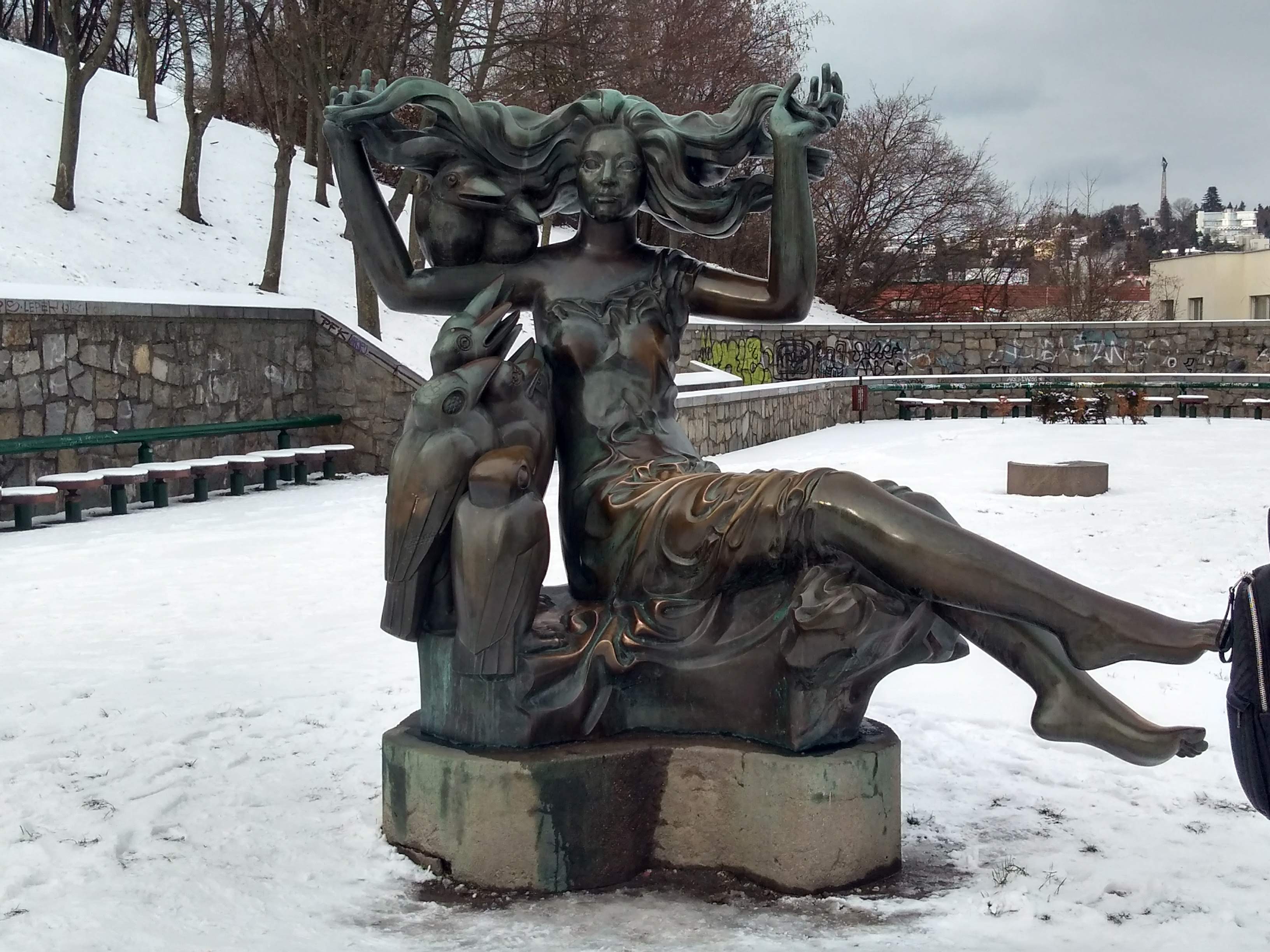 Its worth going inside if you have time.   The €10 entrance fee admits you to the Slovak National Museum and there are great views from the towers.

There has been a fantastic job done in restoring the building…

My favourite thing in the museum – I wouldn’t hang it in my house but I love the detail – more than 2 million glass beads were used to decorate the background of the panel. 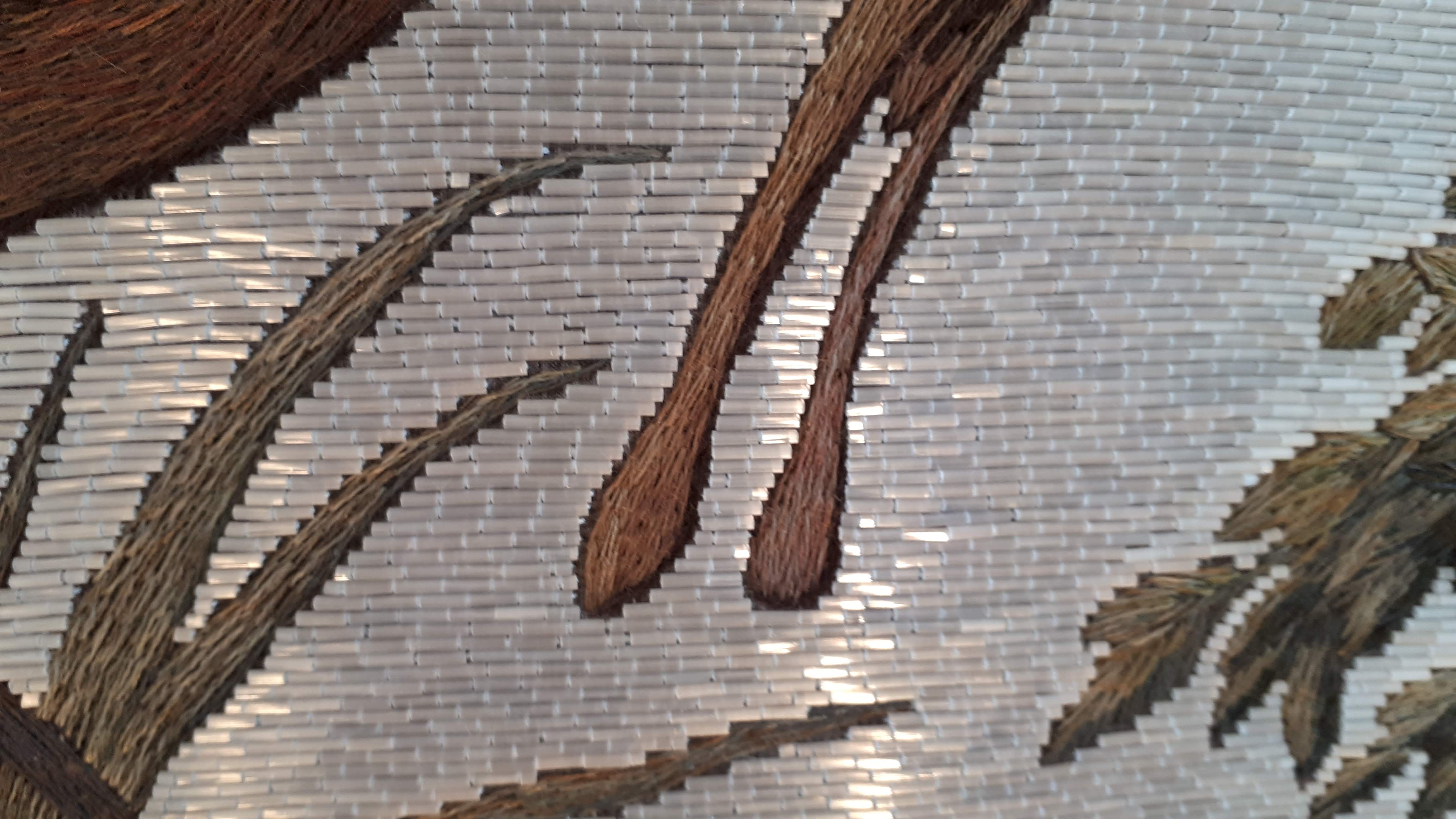 Great views from the tower… 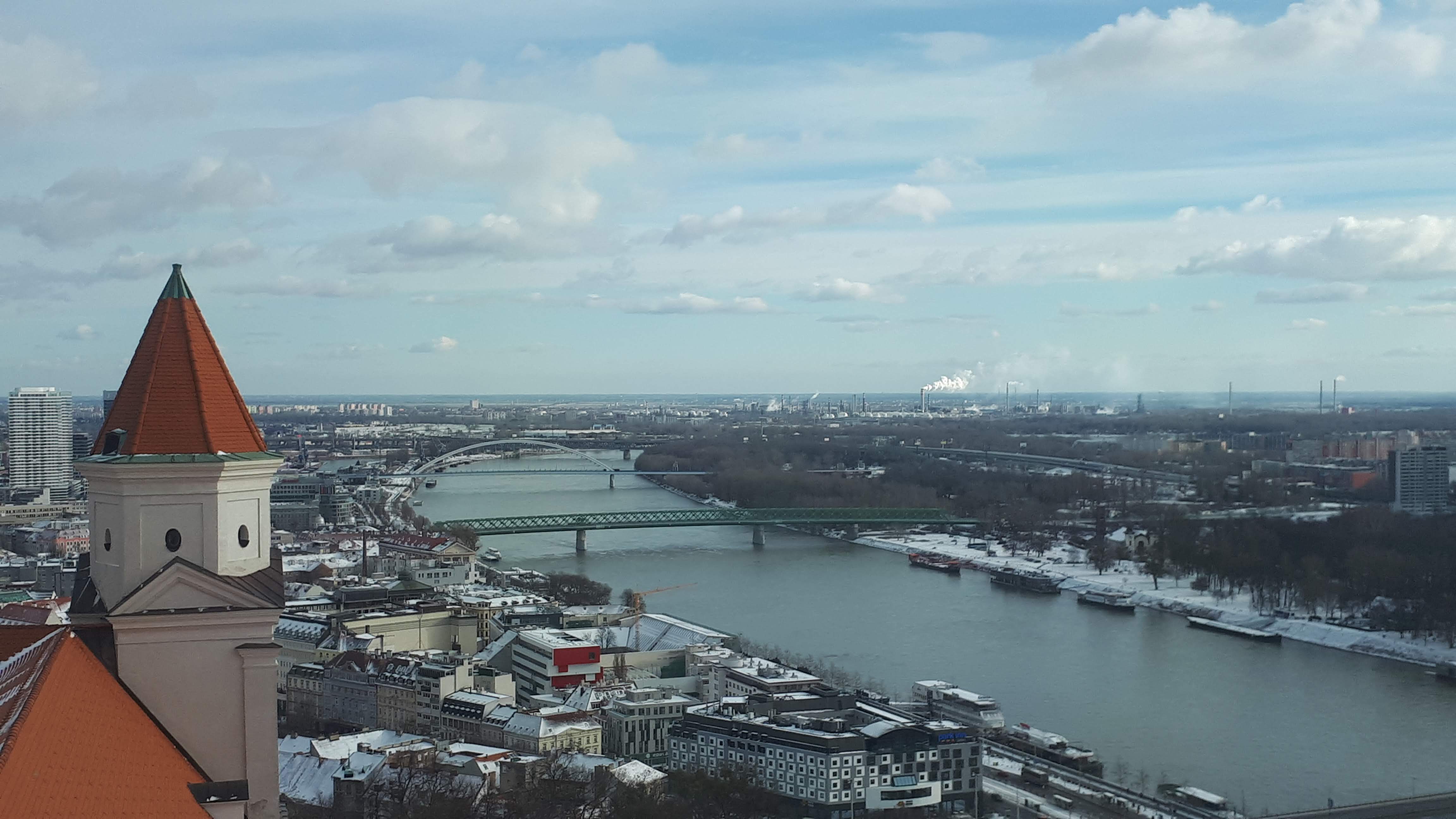 The tower offers a good view of the SNP (Slovak National Uprising) bridge.  Popularly known as the ‘UFO’ bridge because of the circular structure hovering above.    You can take the walkway under the traffic and an elevator will bring you to the observation deck.  There’s also a restaurant for deep pockets. 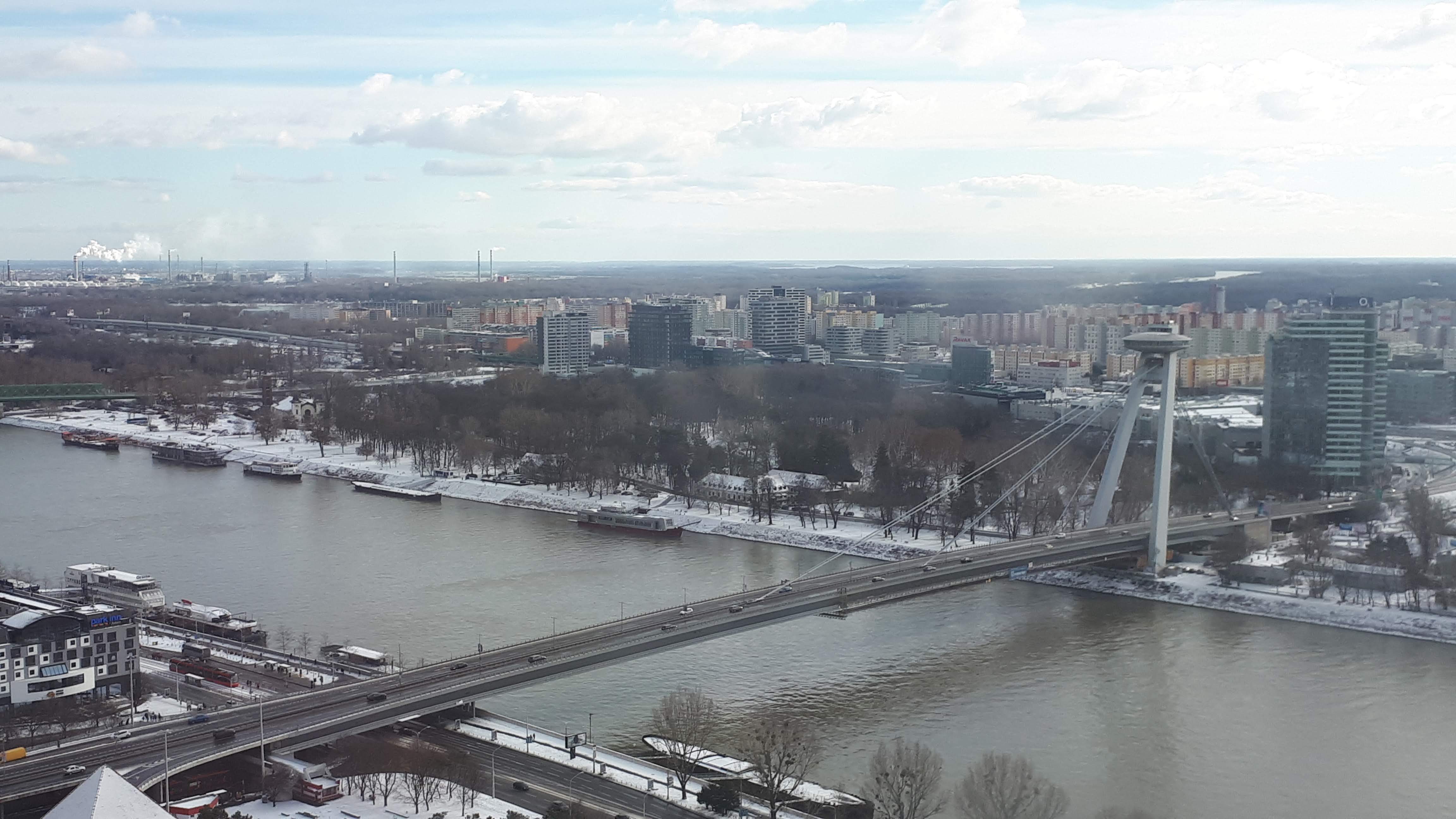 Behind the UFO on the other side of the river,  you can see Petrzalka –  a communist housing scheme.   The complex of apartment buildings is said to be the most densely populated place in central Europe.

Back across town is the official residence of the Slovak President.  The palace is not open to the public but the French style gardens looked beautiful in the snow! 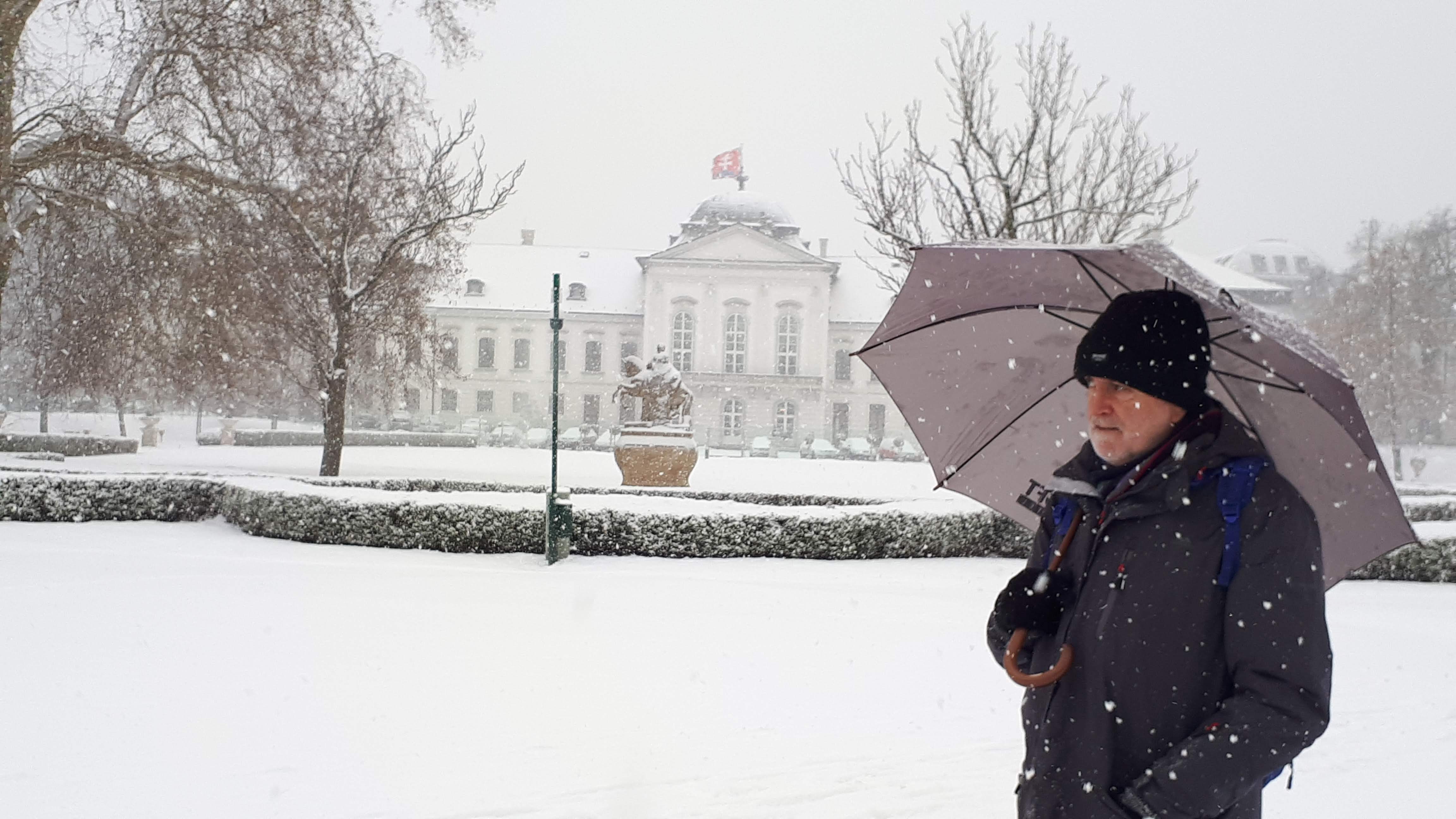 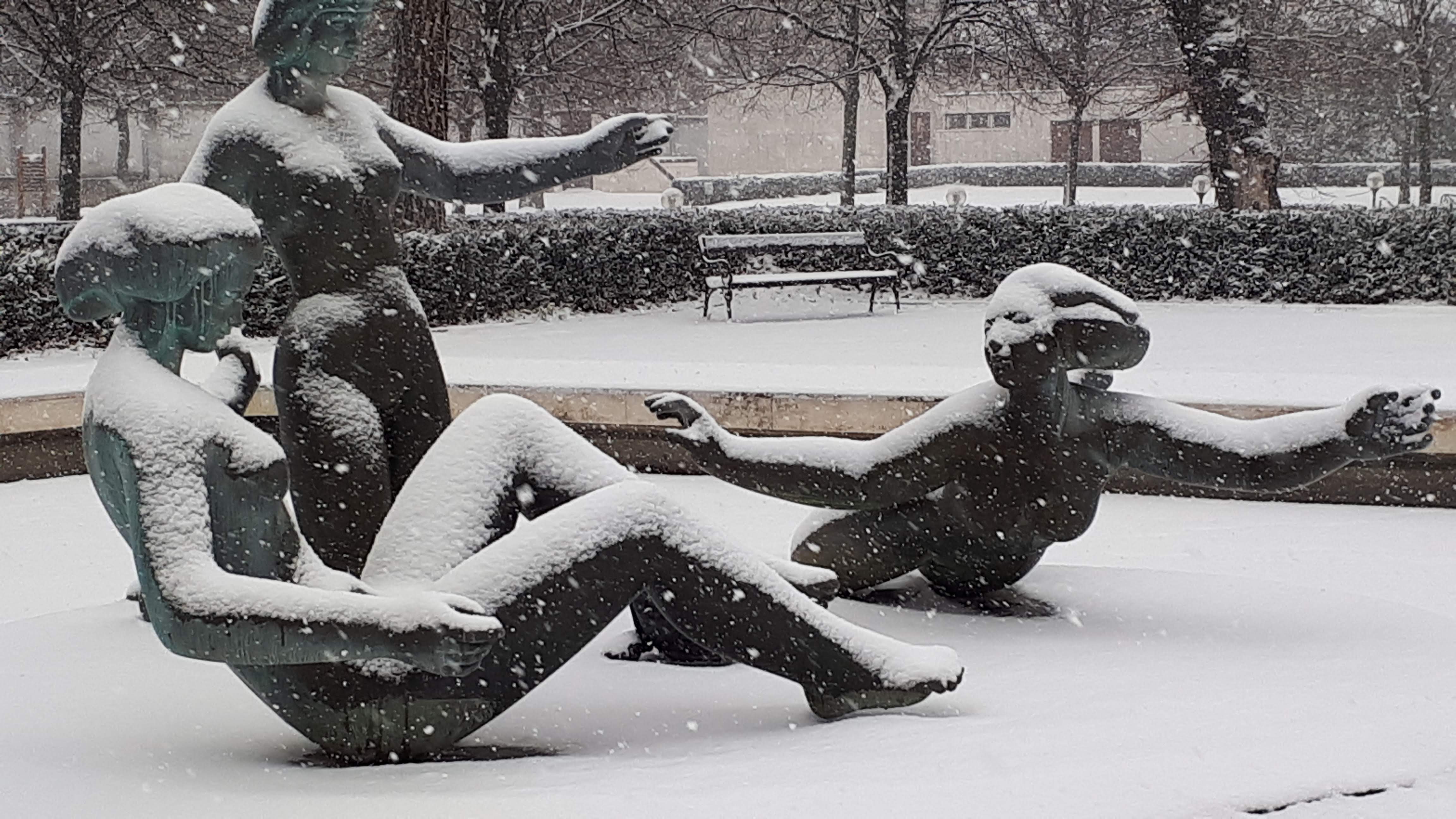 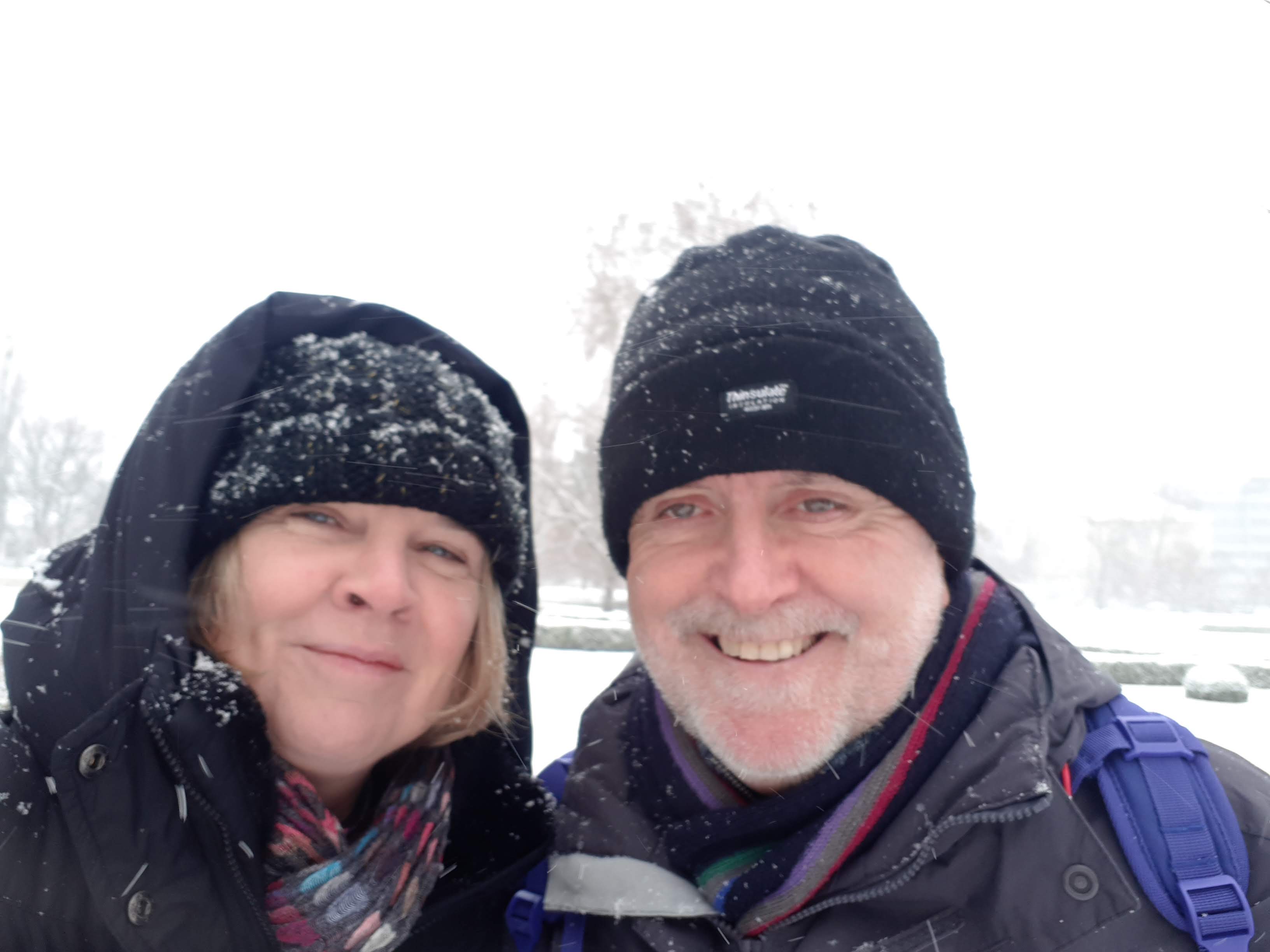 We traveled by train from Vienna – the journey takes little over an hour and cost €10.40 single.

Getting around:   We walked everywhere,  including from the train station to our hotel.

Where we stayed:  Loft Hotel.  (about 10 minutes from the station and town). Check out Loft Hotel Bratislava – gets my vote!!

Food and Drink:  Not as cheap as you might expect but plenty of choice – sushi and Thai,  tapas and full English breakfasts,  Slovak pork and pancakes,  wine and beer.

Shopping- usual tourist traps and a few nice gift shops.  The Eurovea shopping mall is within walking distance near the river: