It is the 18th century and Dublin is BOOMING!  The medieval city is being modernised and narrow winding streets are replaced with fine avenues.  The quays are redeveloped and the River Liffey is spanned with grand bridges.   Dublin is evolving into one of the great cities of Europe.

The seat of government is here so parliamentarians,  administrators and lawyers need somewhere fine to live.  There is a huge demand for elegant residences as well as public buildings.

This property boom is carefully regulated.   Strict controls are imposed on developers who must adhere to planning rules regarding location,  design and style.   This cohesion produces the landscape that we now call Georgian Dublin.

Spanning more than a century,  the Georgian period refers to the successive reigns of 4 King Georges – from the accession of George I to the throne in 1714 to the death of George IV in 1830 (William IV reigned from 1830-1837 but is usually included as part of the era).

There are a number of features that characterised a typical Dublin Georgian property and they are still easily identified today as you stroll through the city:

1. The houses were usually terraced.   This allowed the builder to fit many more residences into a street or around a square.   Each block of houses was viewed as a whole – the city planners considered regularity and uniformity as being of far more importance than any individuality that might be considered by builders or prospective homeowners. 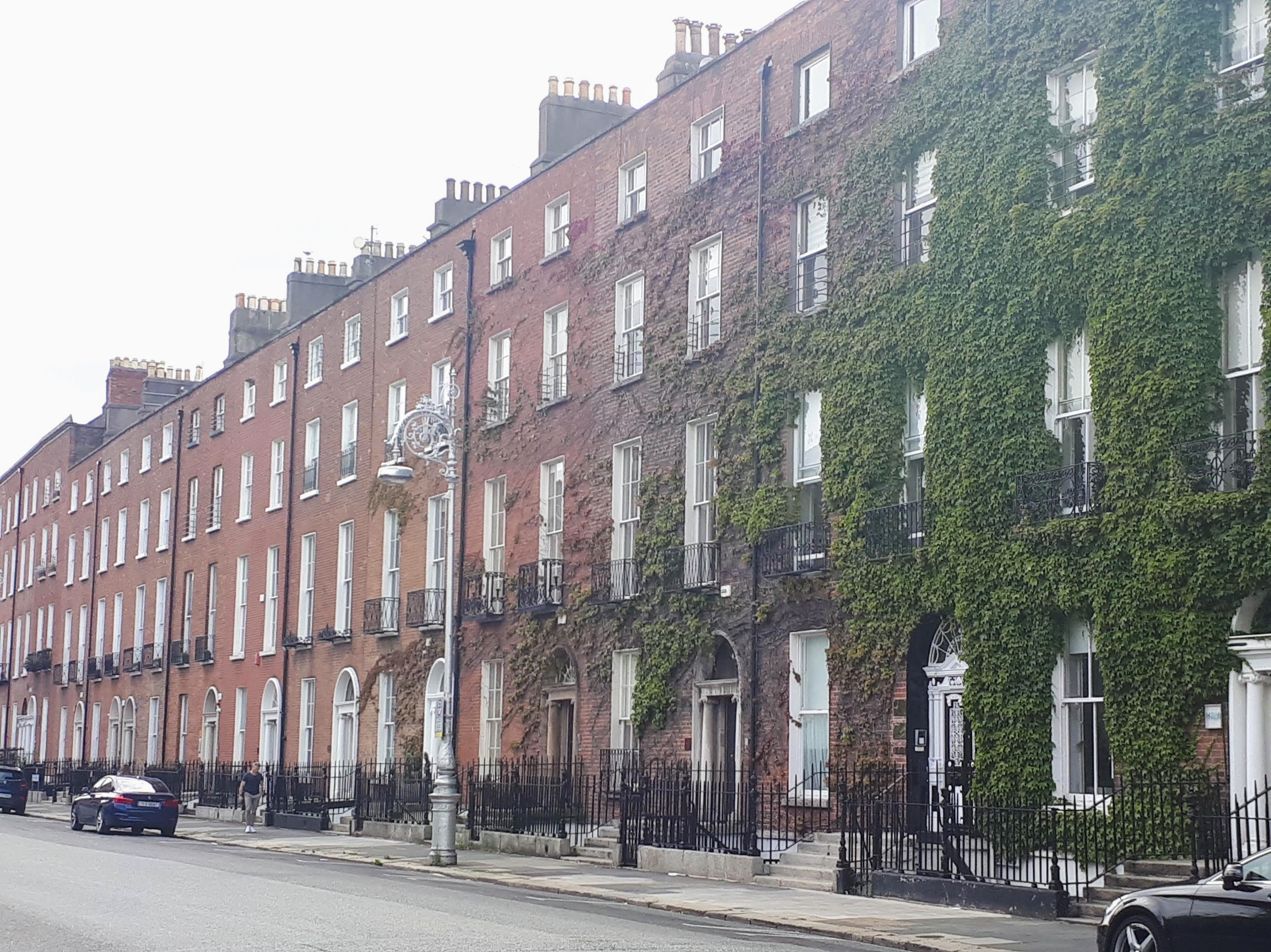 2. The Georgian style was influenced by Ancient Greek and Roman architecture.  The square shape in particular was considered a thing of perfect architectural proportion and most houses resembled a box with strict symmetrical design.    The only exception to perfect balance was the front door which was to one side. 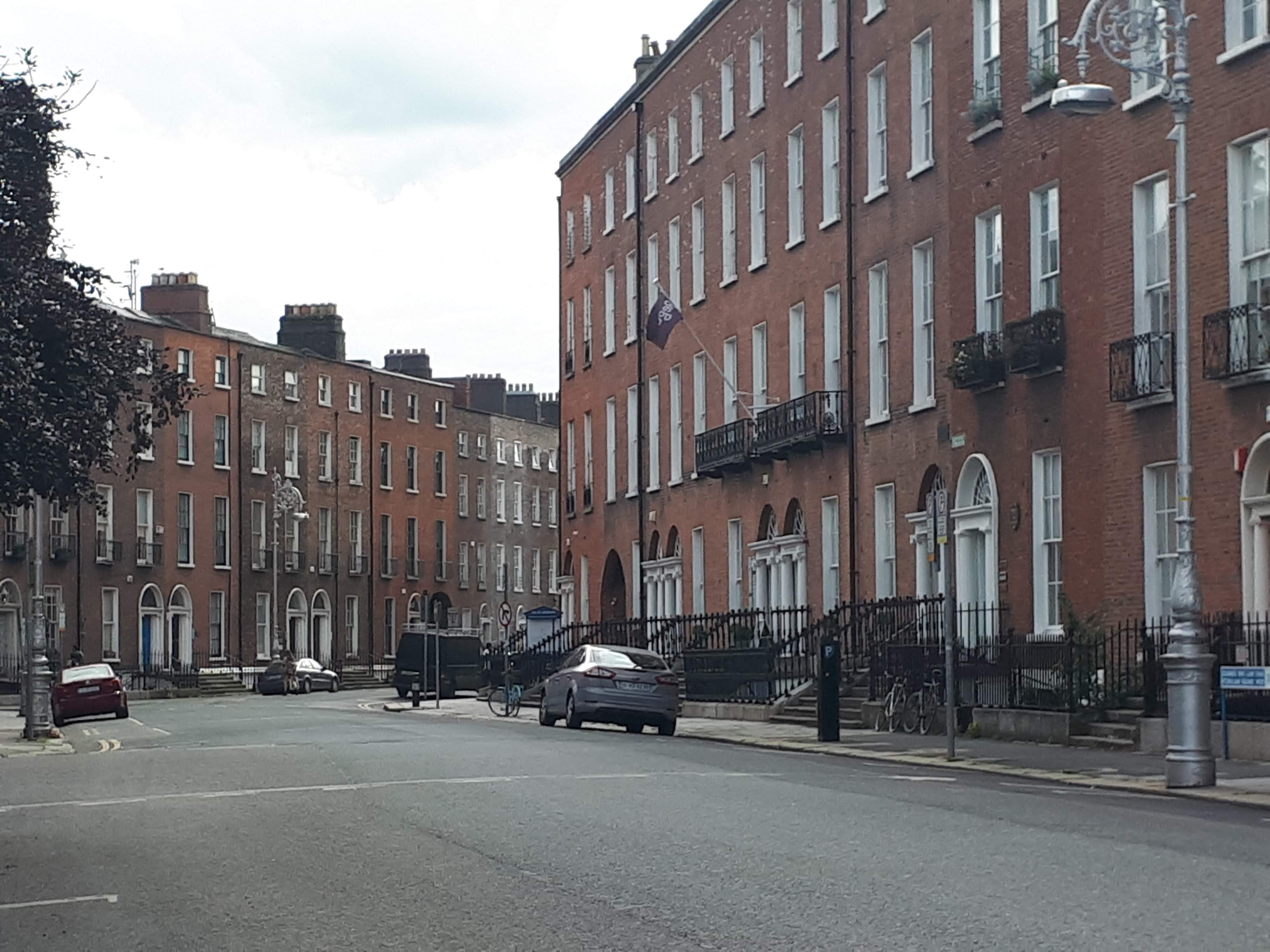 3. The understated plain exterior was typically faced in red brick.   The bricks were handmade and this allowed for an irregularity in texture and colour which added some variation and character to the facades. 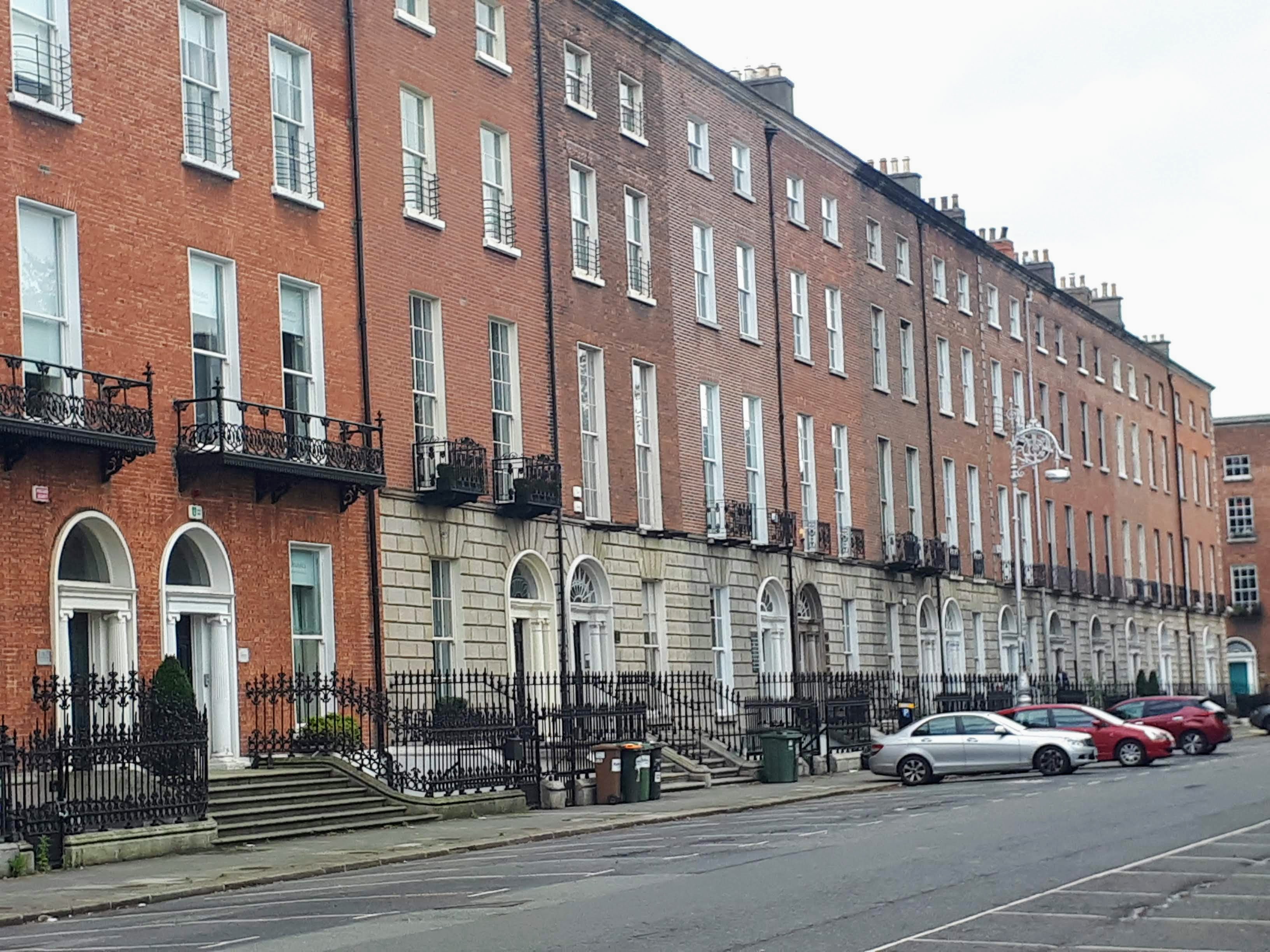 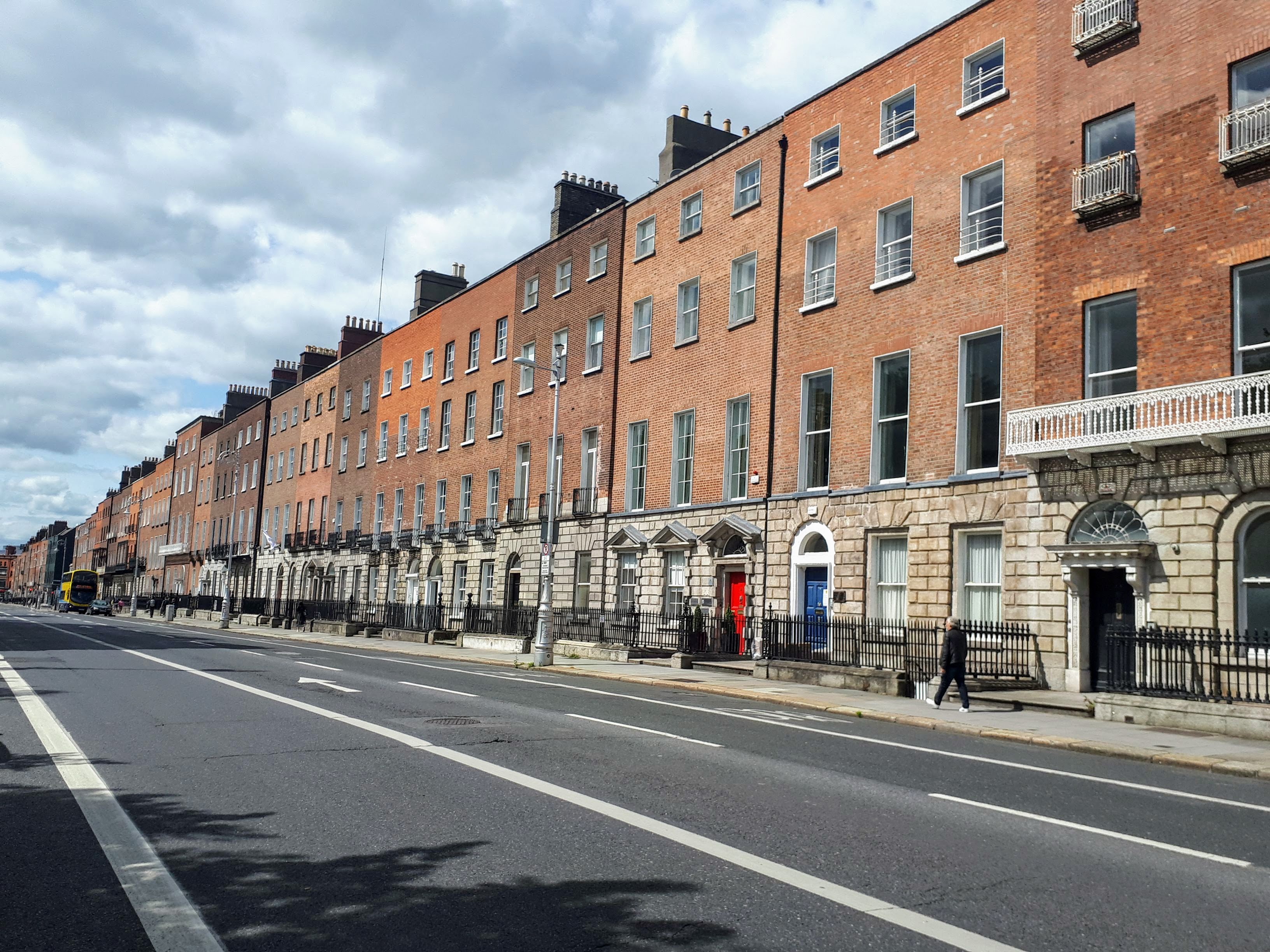 5. Steps  – usually granite – led from the main door directly onto the footpath. 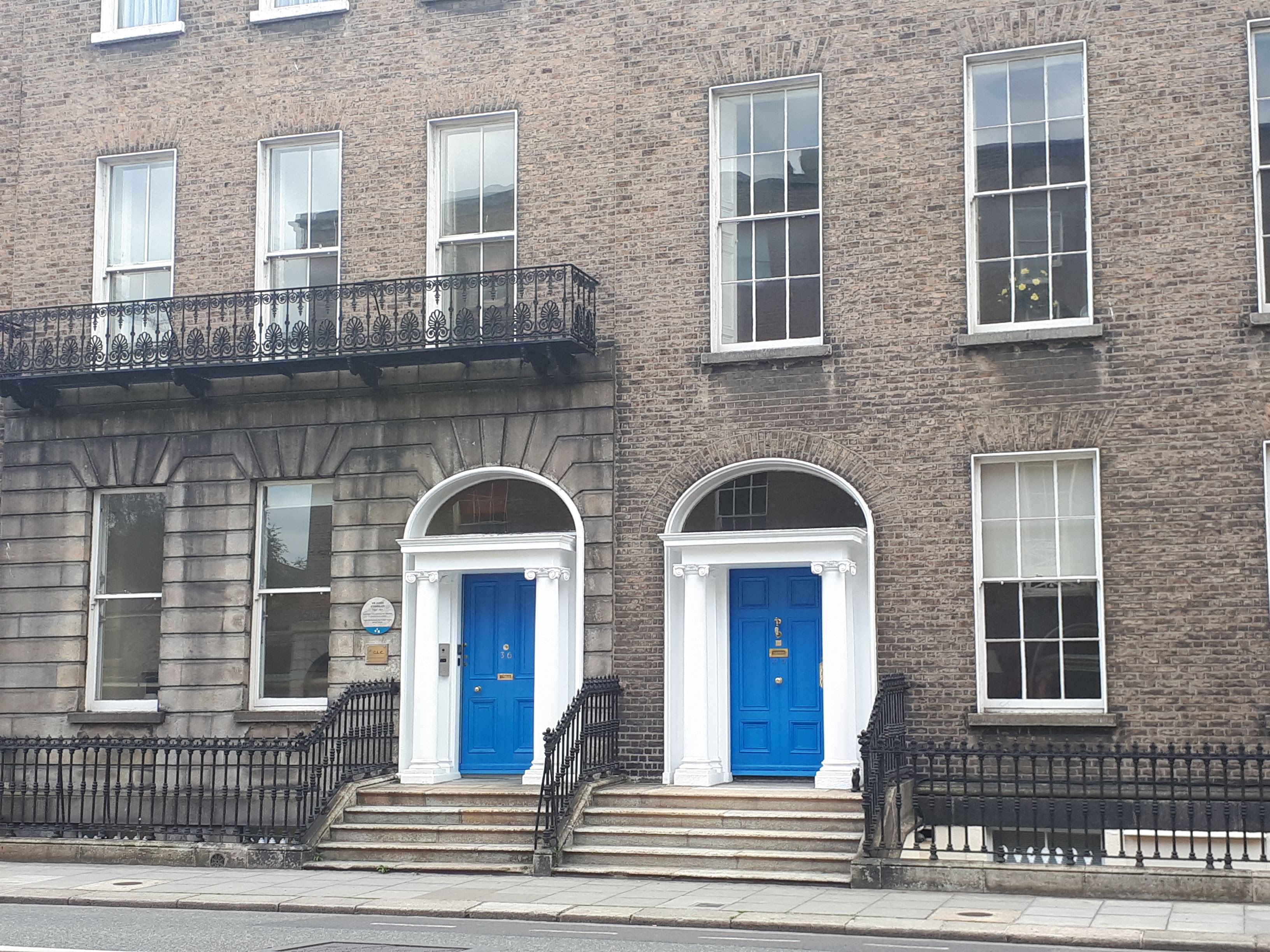 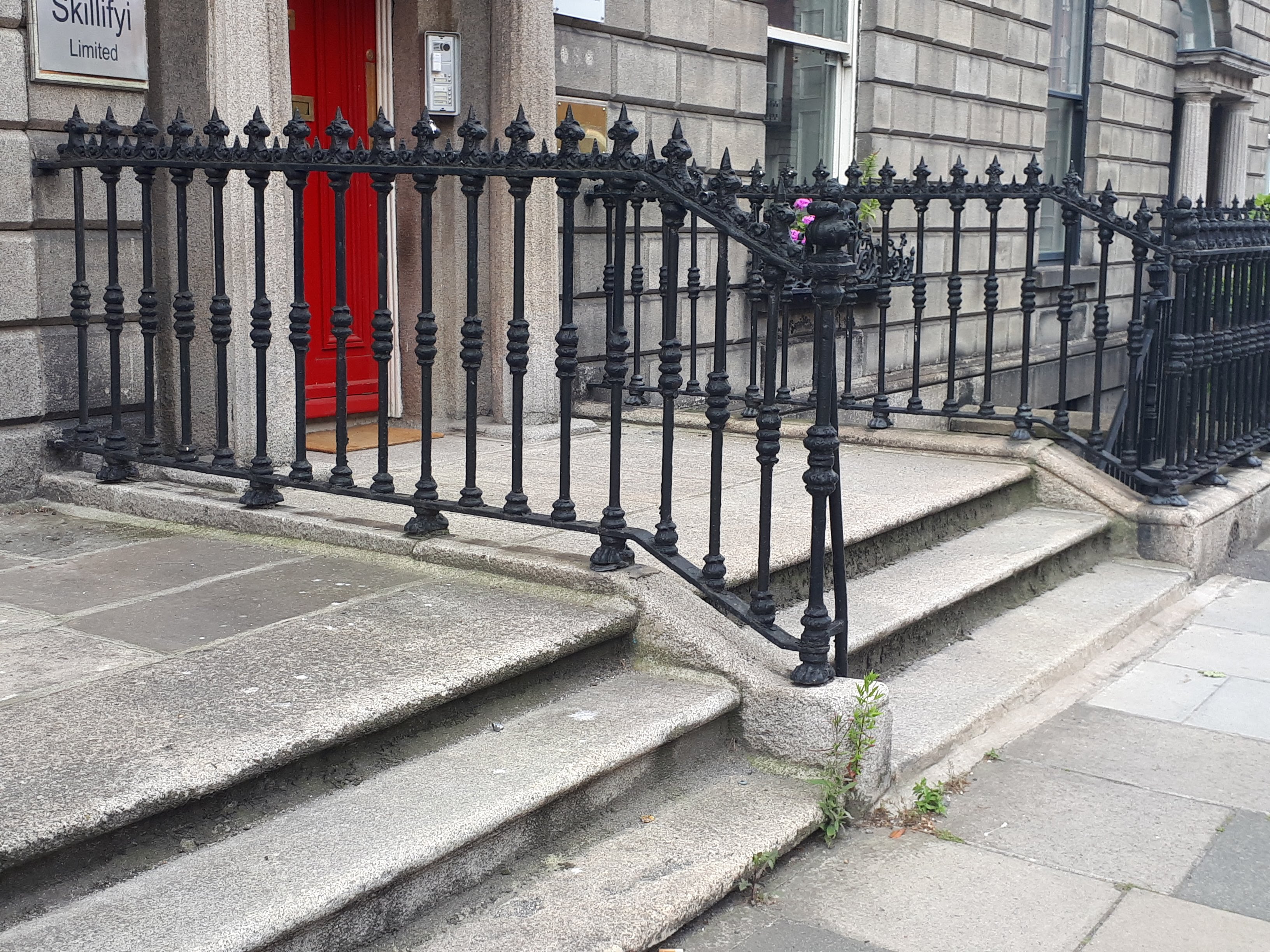 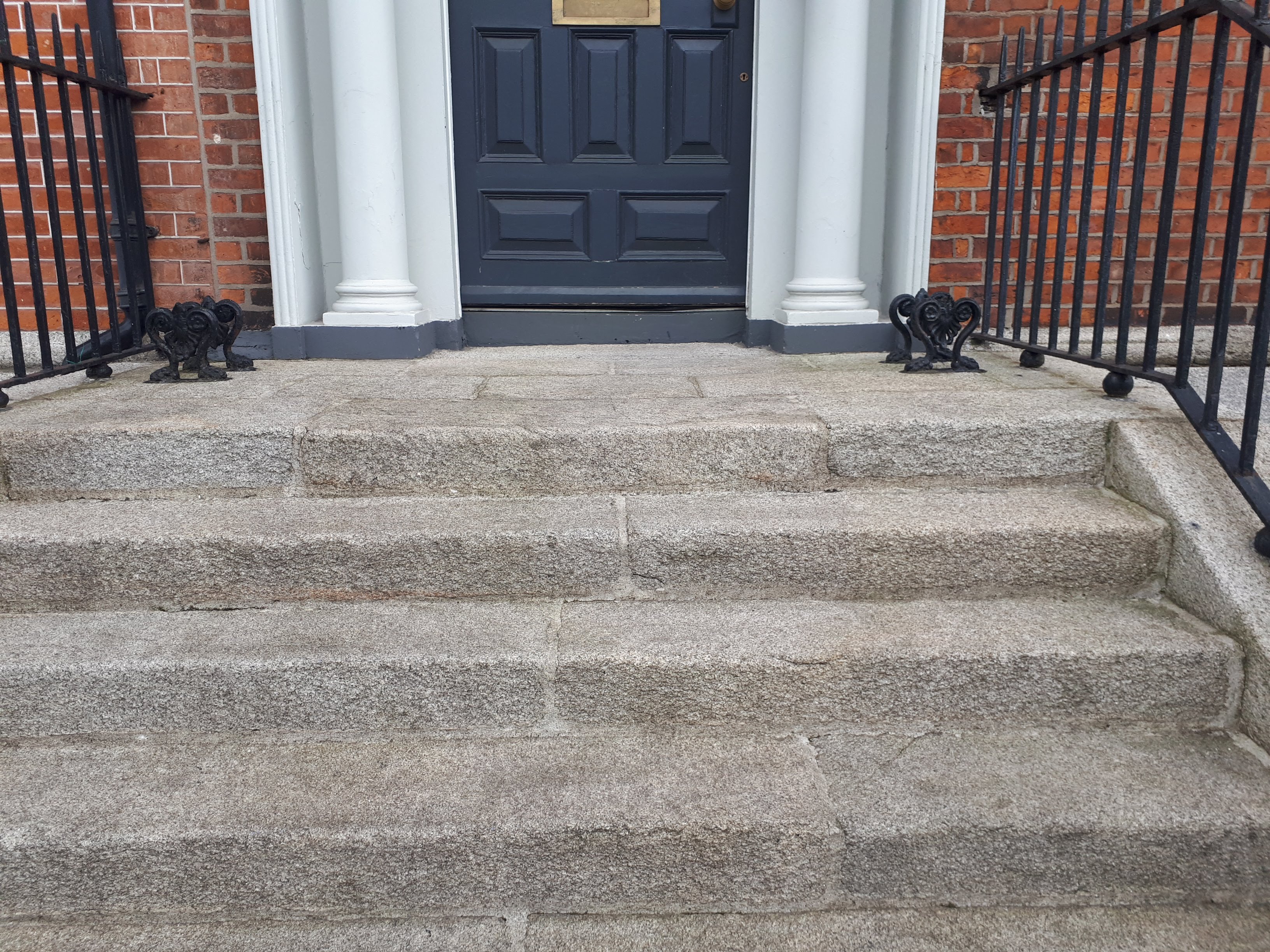 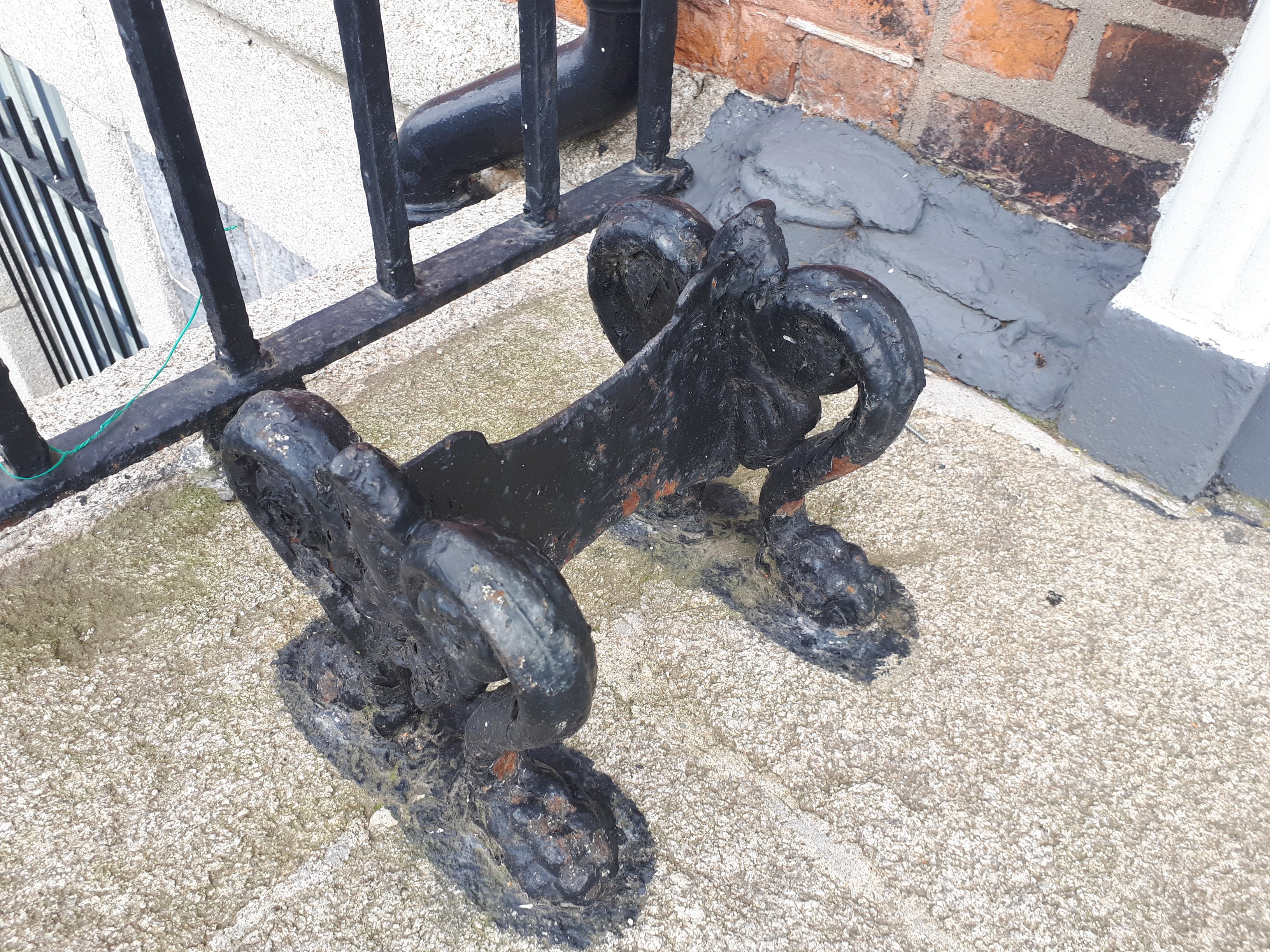 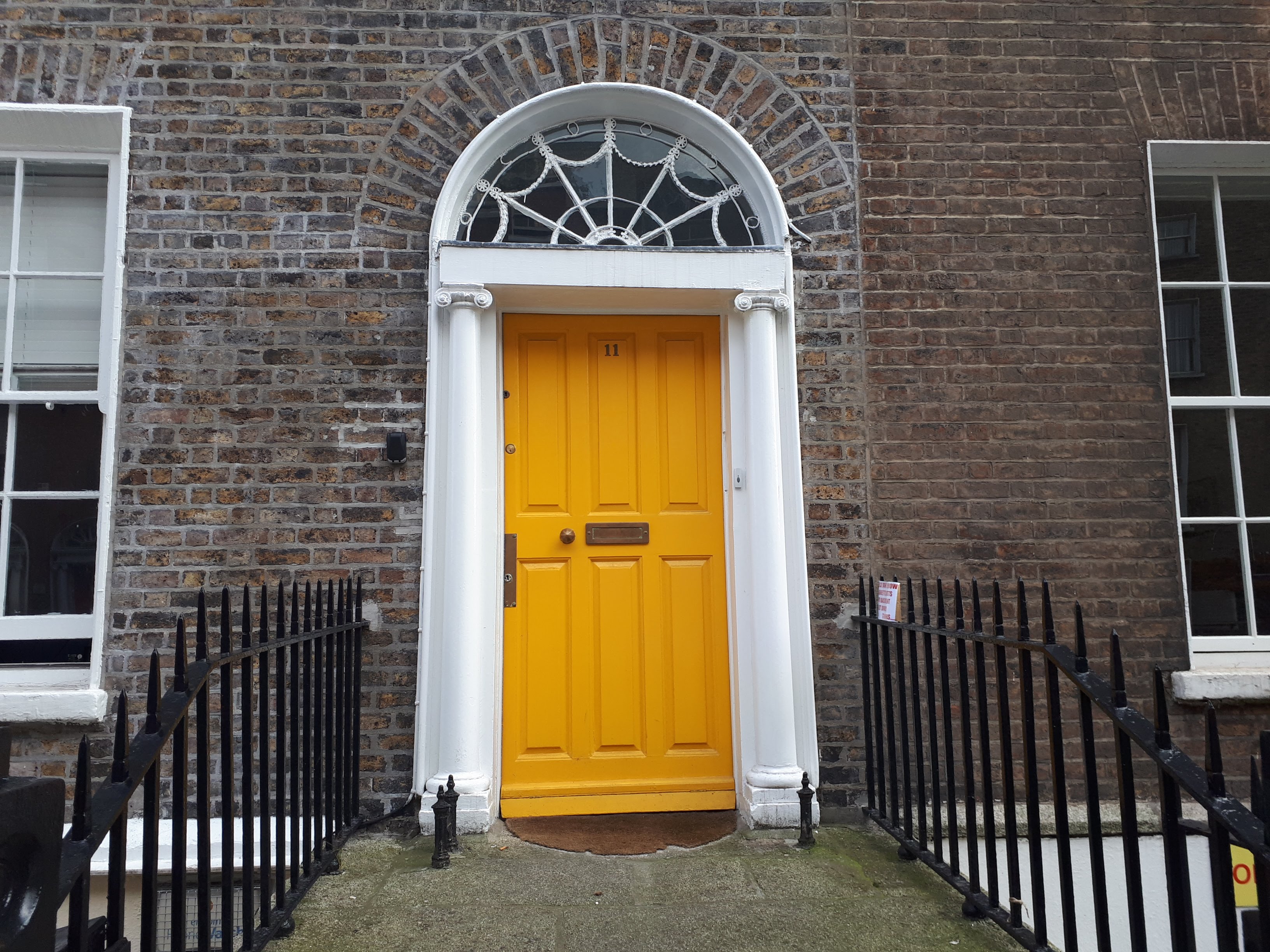 7. There were no front gardens but many houses were built around beautiful parks and squares.   These open areas were often only accessible to residents. 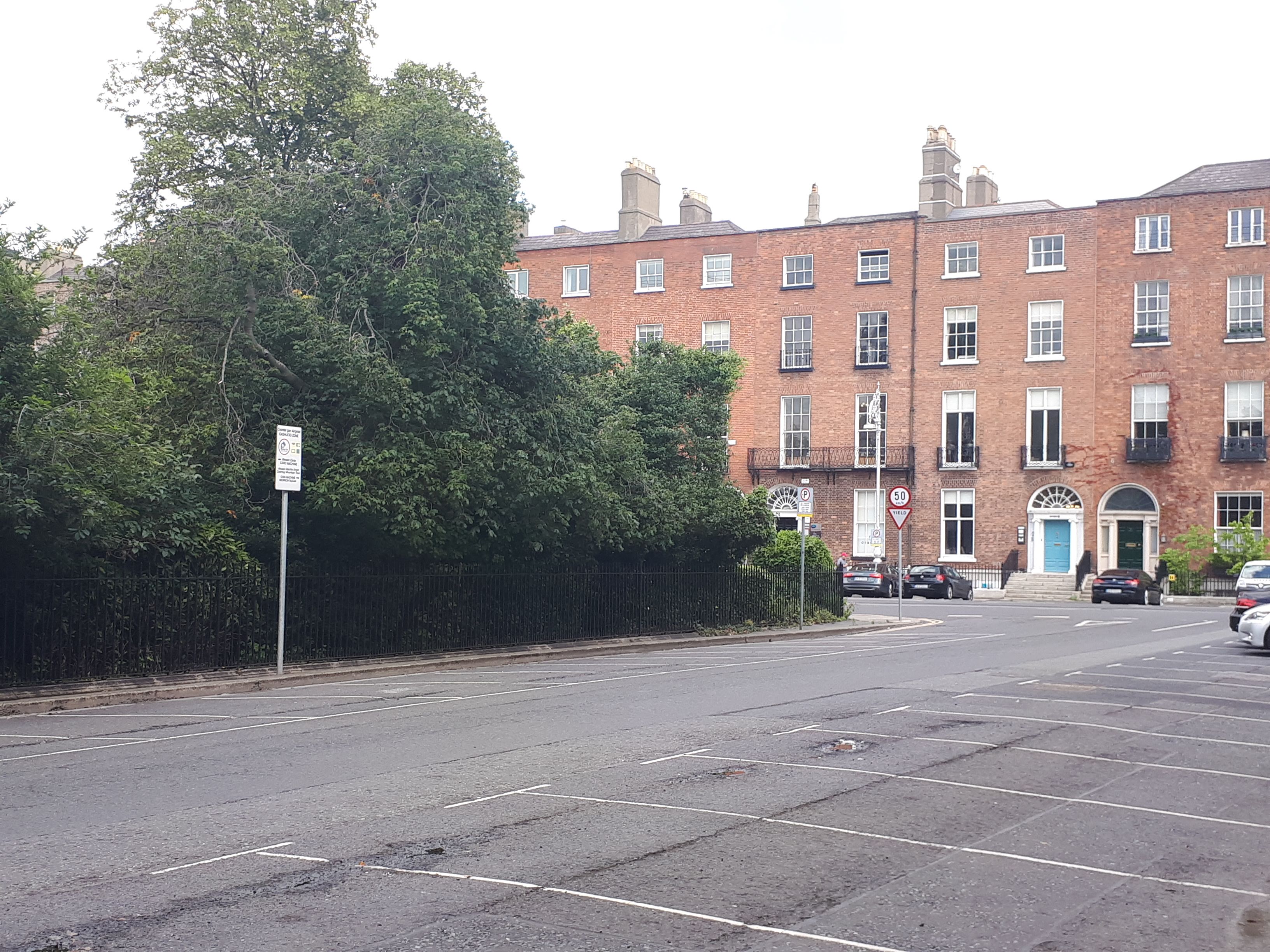 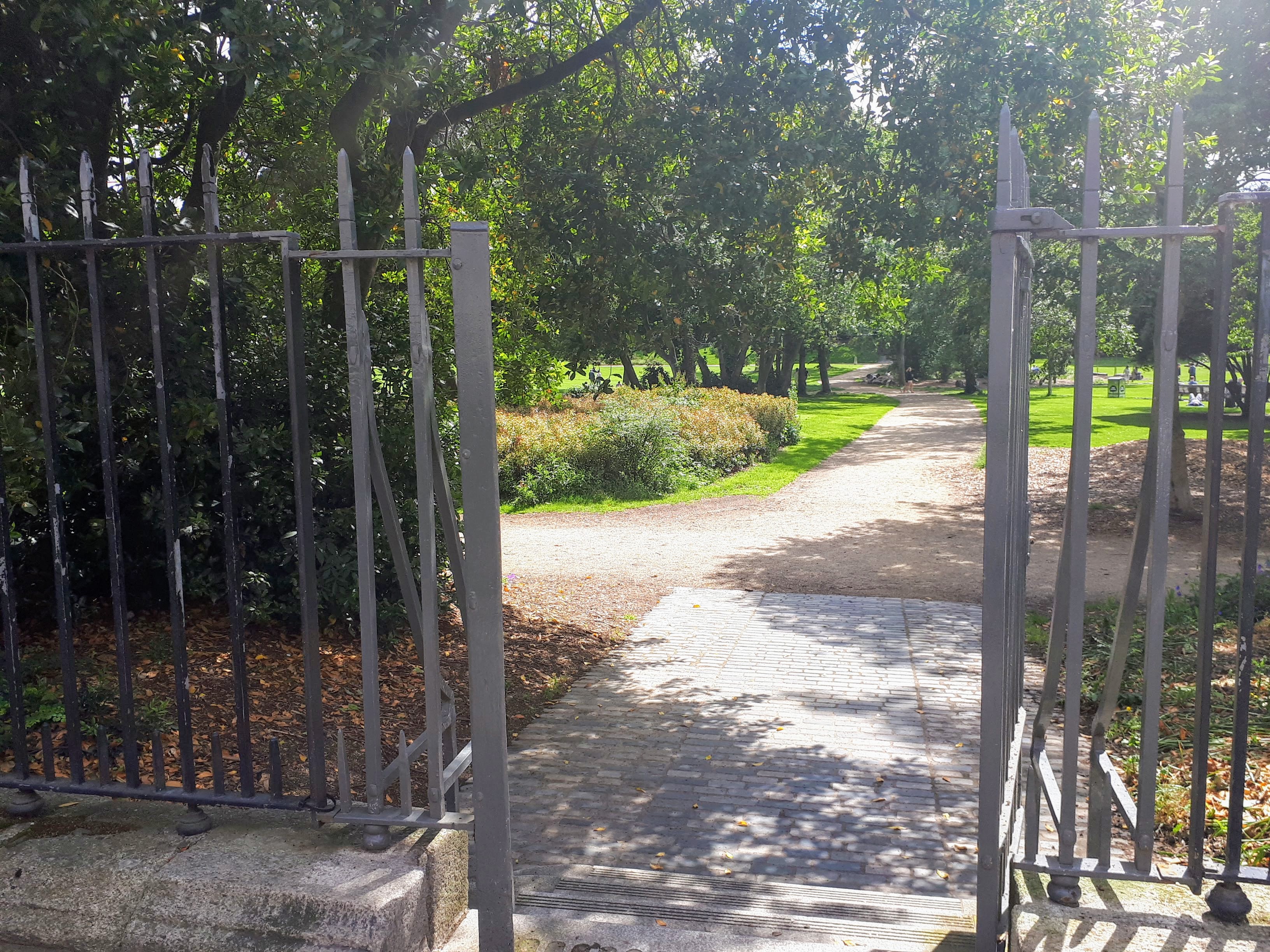 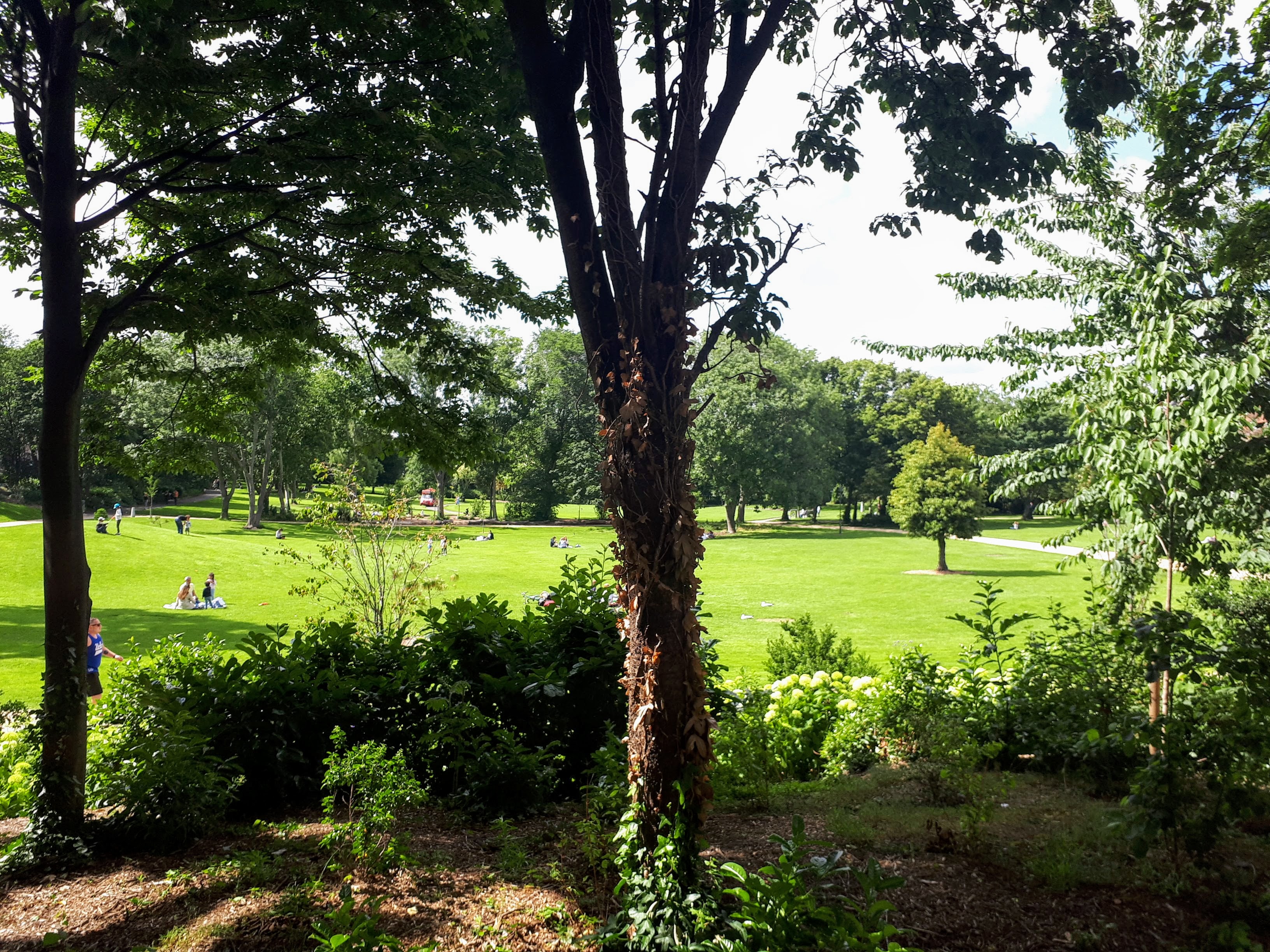 8. In keeping with classical proportions,  doors should have been centred but allowances were made for terraced townhouses  – the front door was off-centre to allow for a better sized room to fit on the ground floor beside the hall.  The Doric style doorways featured a paneled front door.   All doors would have been the same colour – probably black (but Dubliners gradually began to use different colours to distinguish themselves from their neighbours). 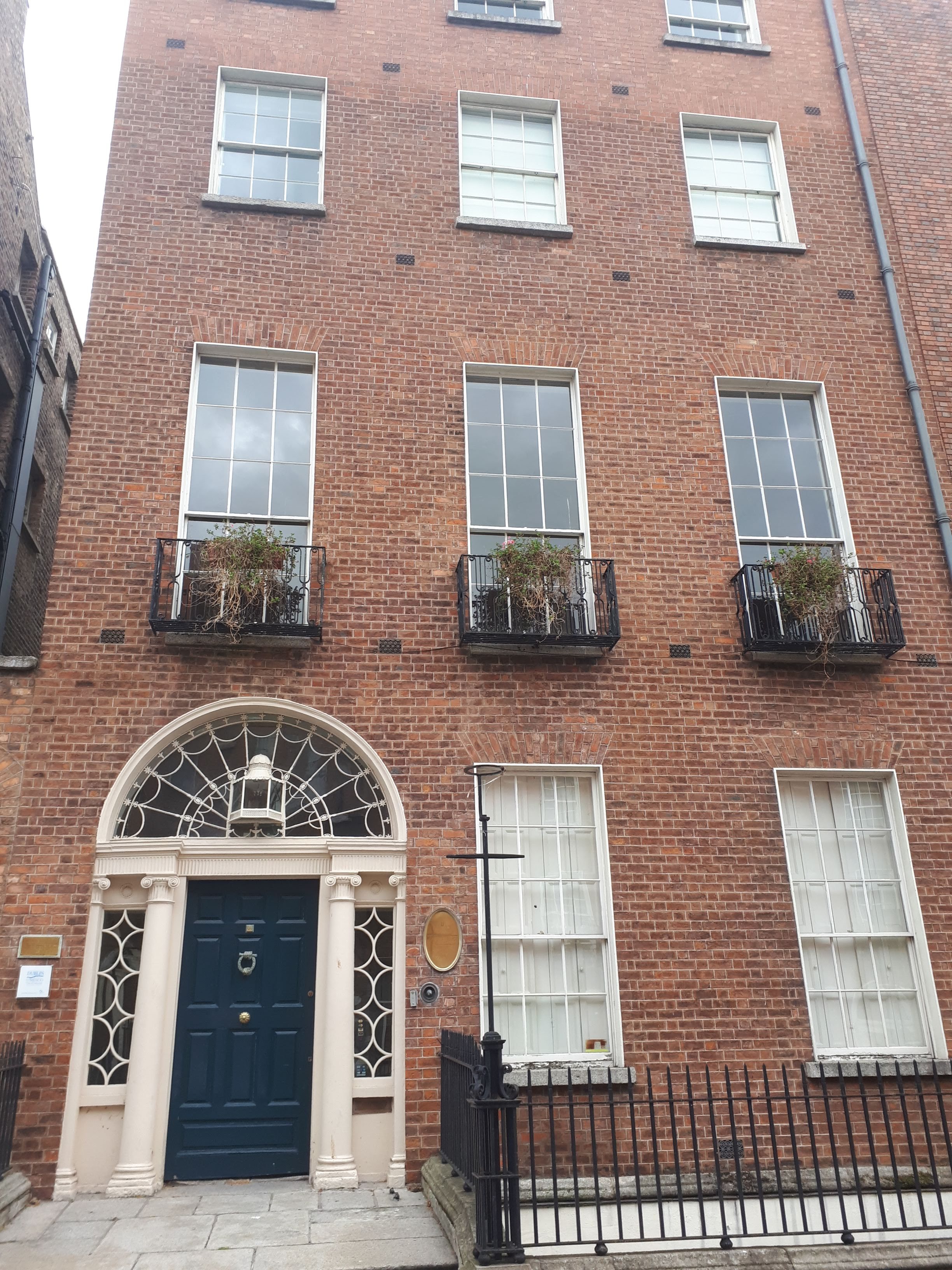 9. Fanlights were set above the door.  These semi-circular windows,  with bars radiating from the centre like an open fan,  were the only source of natural light in the hall. 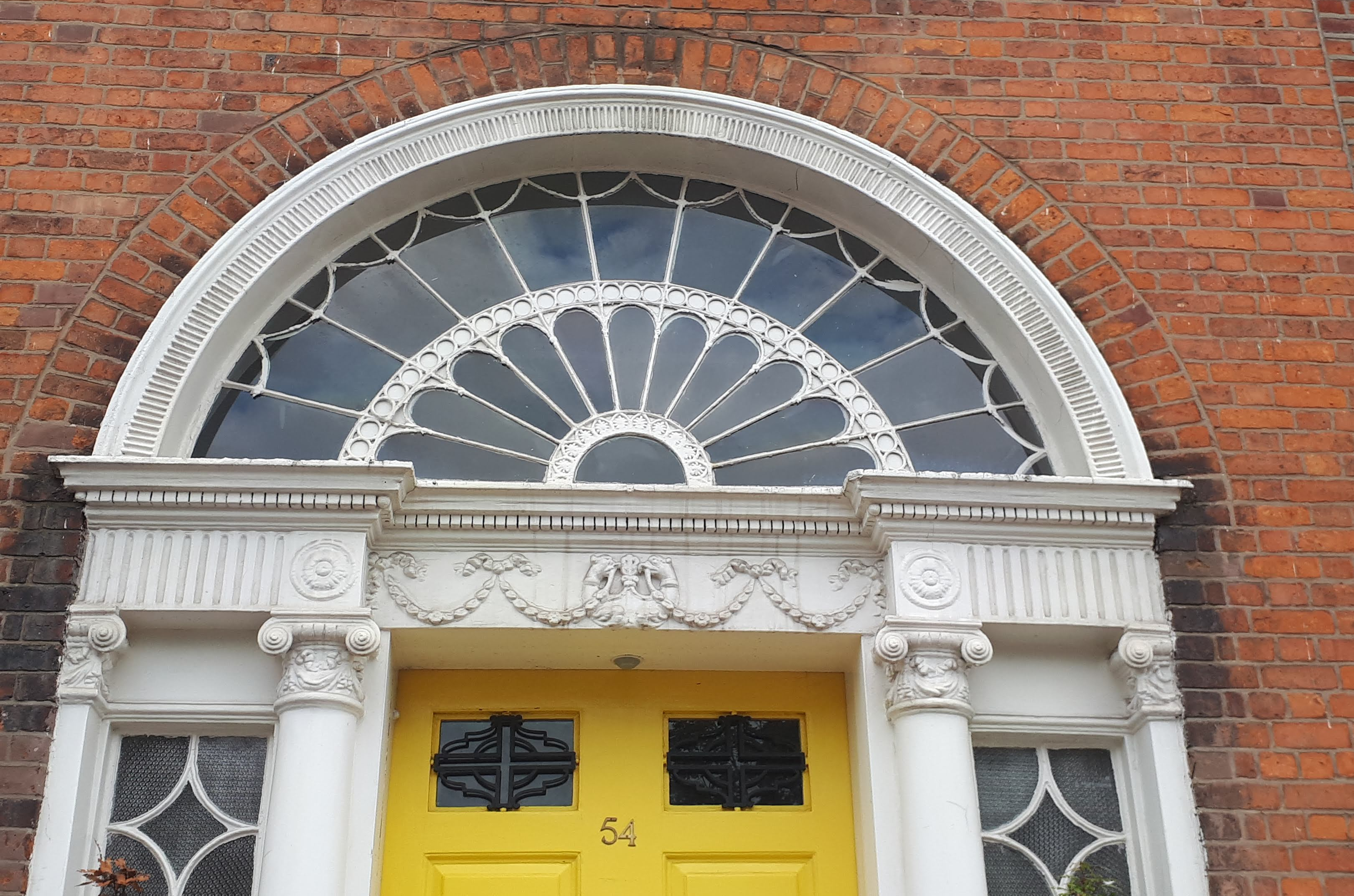 10. Wrought iron railings ran alongside the front of the property and between neighbouring houses. 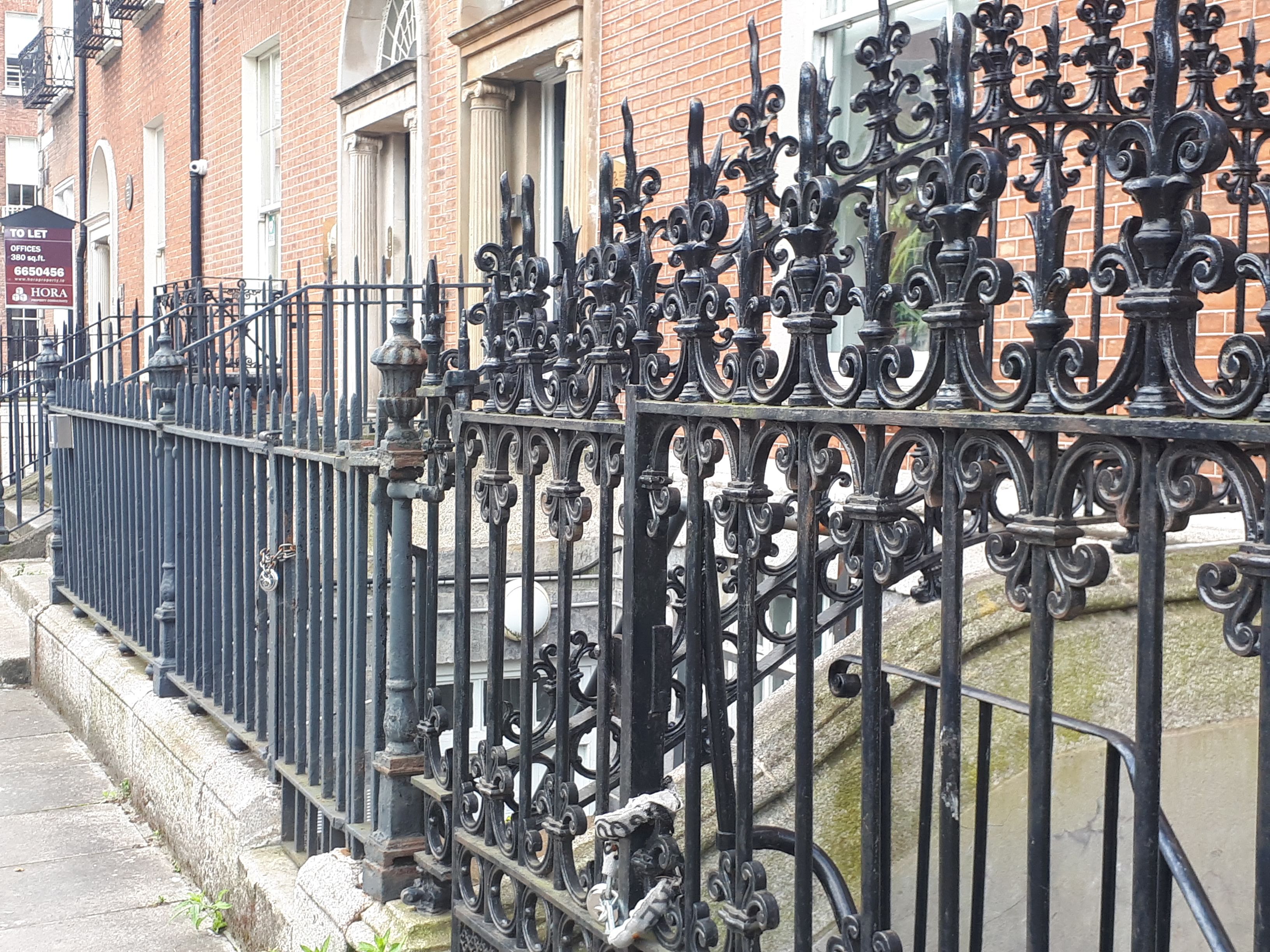 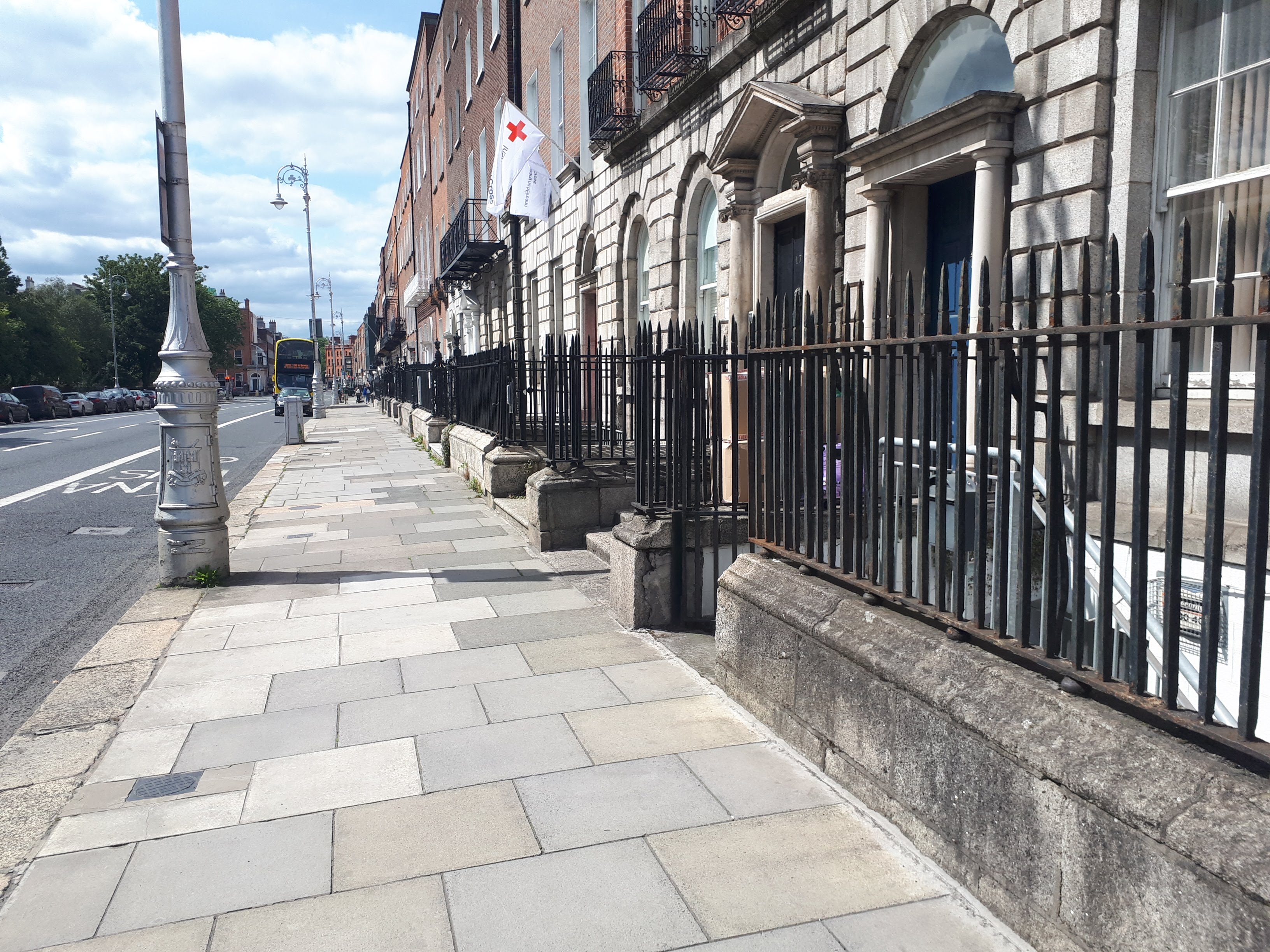 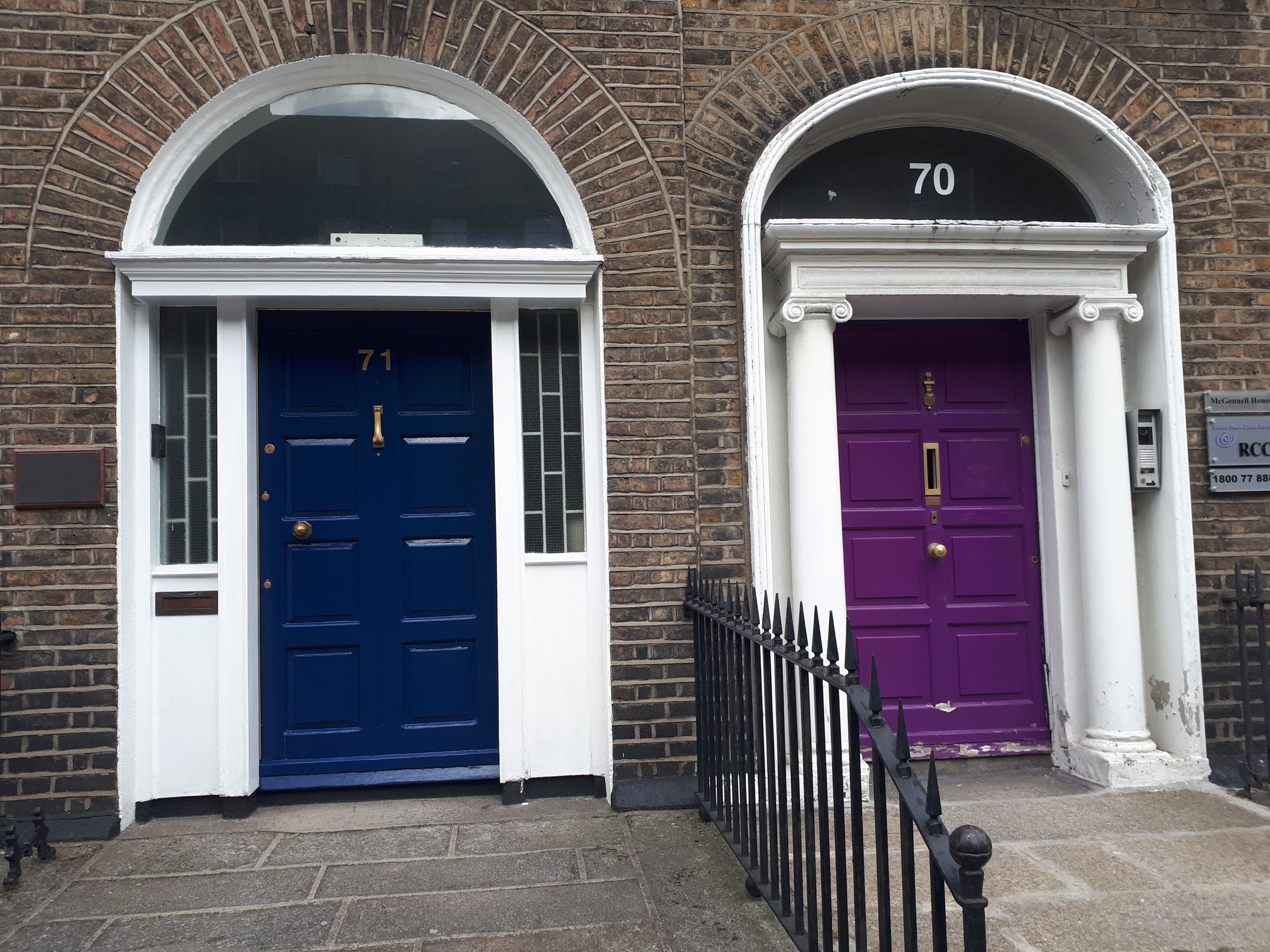 11. Basements were visible from street level and protected by the iron railings.  This was where the servants’ quarters,  kitchens and laundries were located.   The steps gave tradesmen direct access to the kitchen. 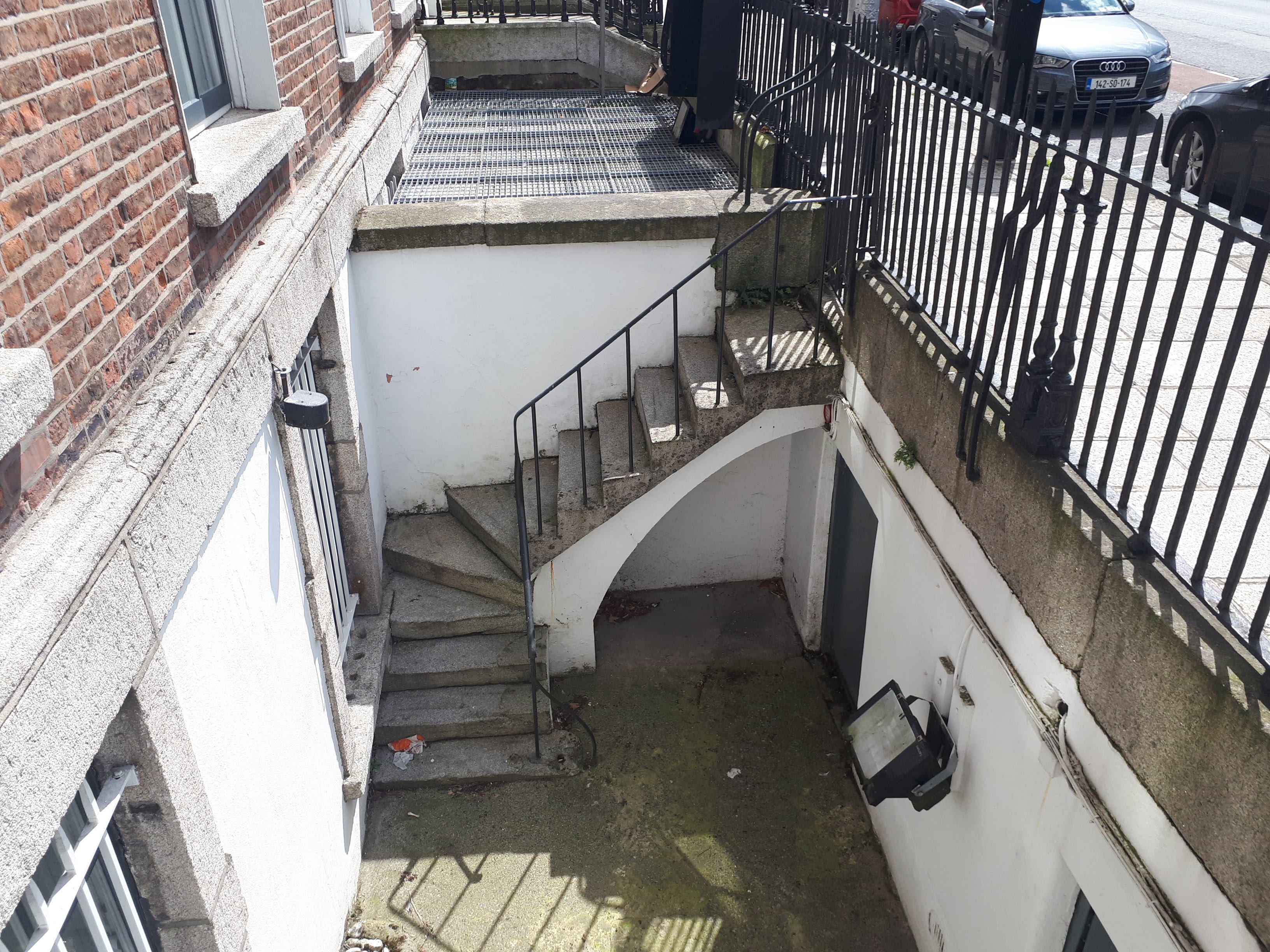 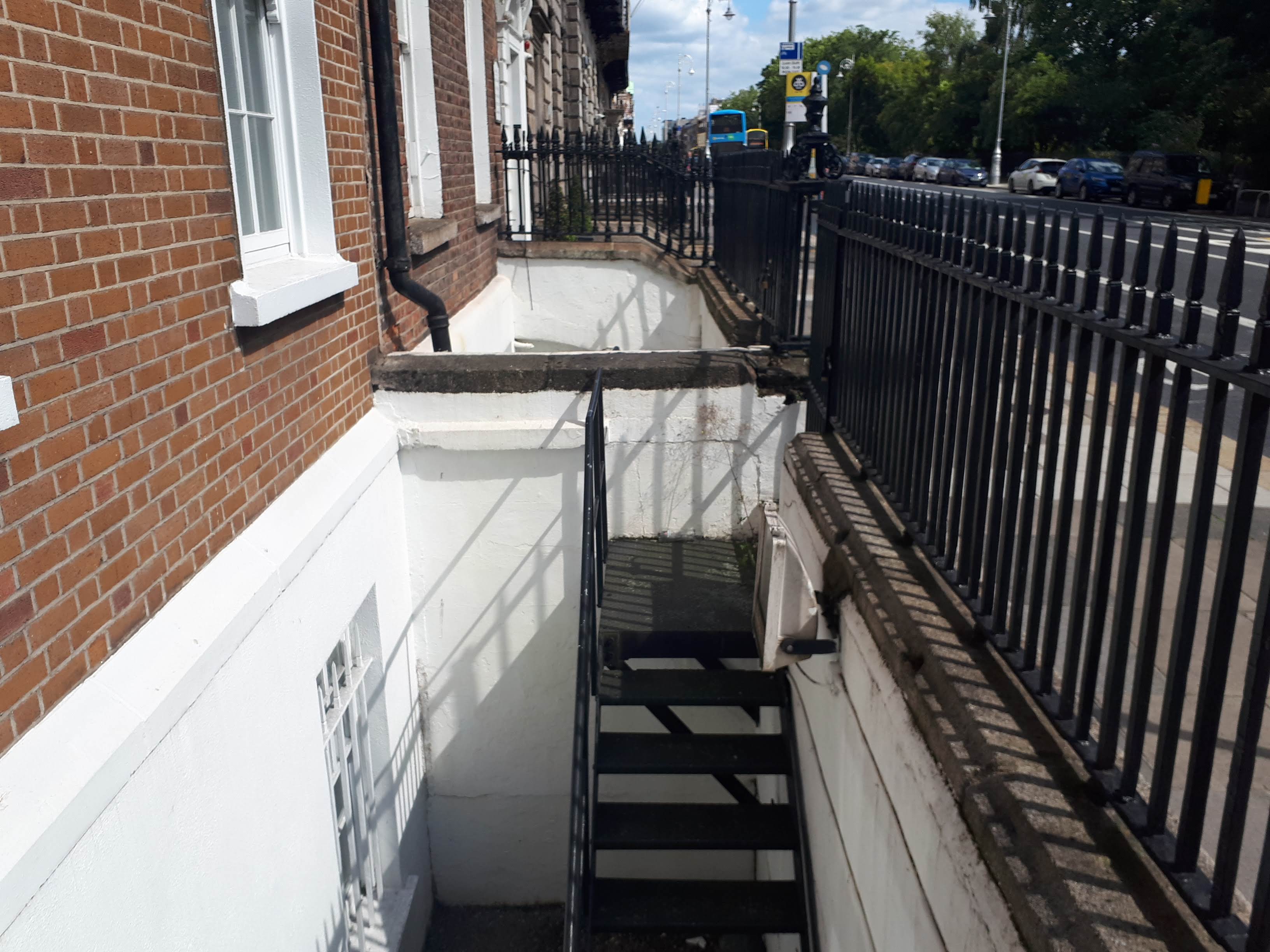 12. Sash windows were a key feature of the house and were carefully designed to adhere to classical proportions.  The typical arrangement was six panels per sash – so 12 panels overall – but in some houses you will see 15 and even 18 panels in some windows. 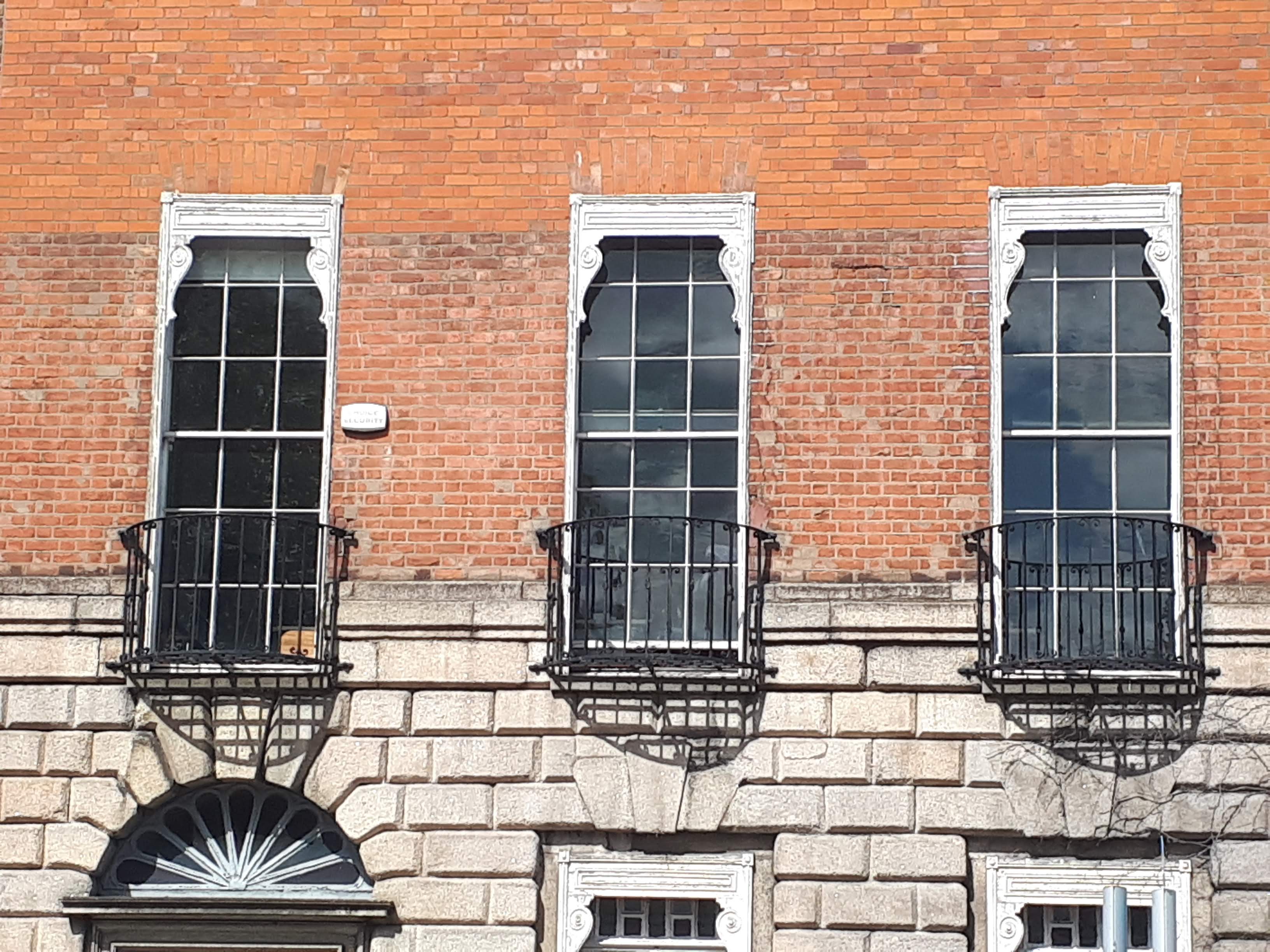 13. The top windows were designed to be progressively smaller than those on the first two floors to give the illusion of great height and grandeur from street level. 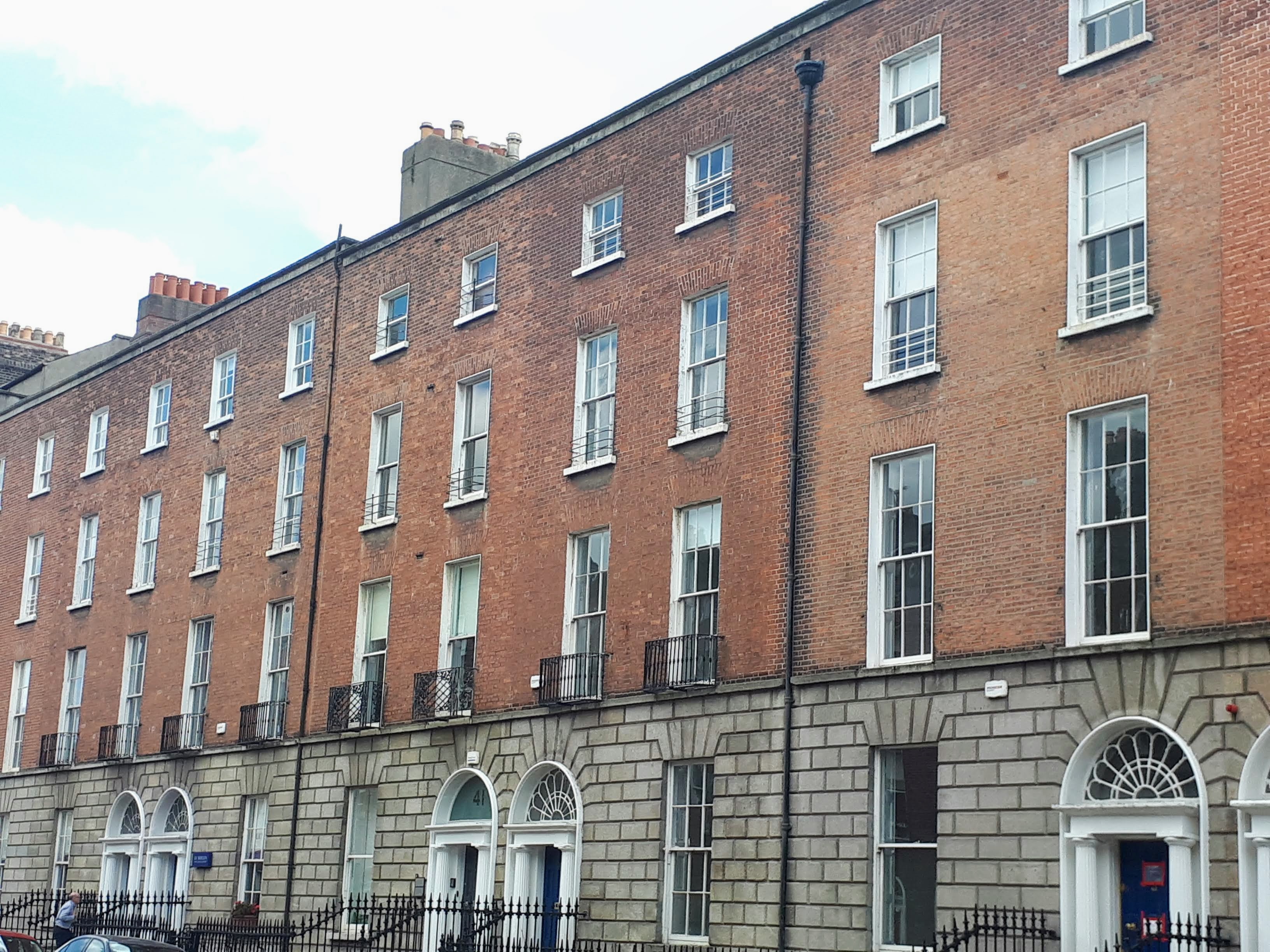 14. Wrought Ironwork featured on the upper levels – either as window guards or small balconies 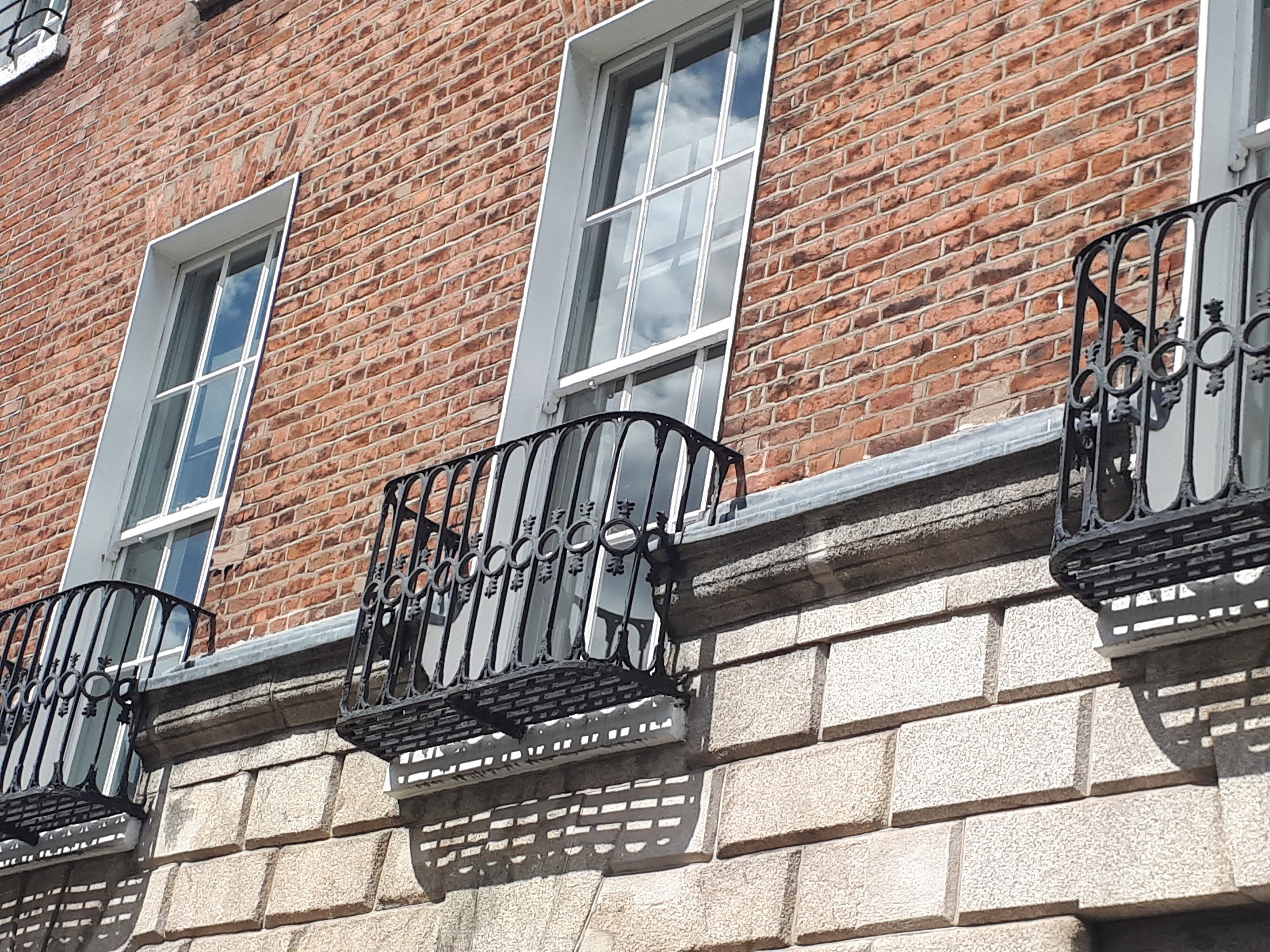 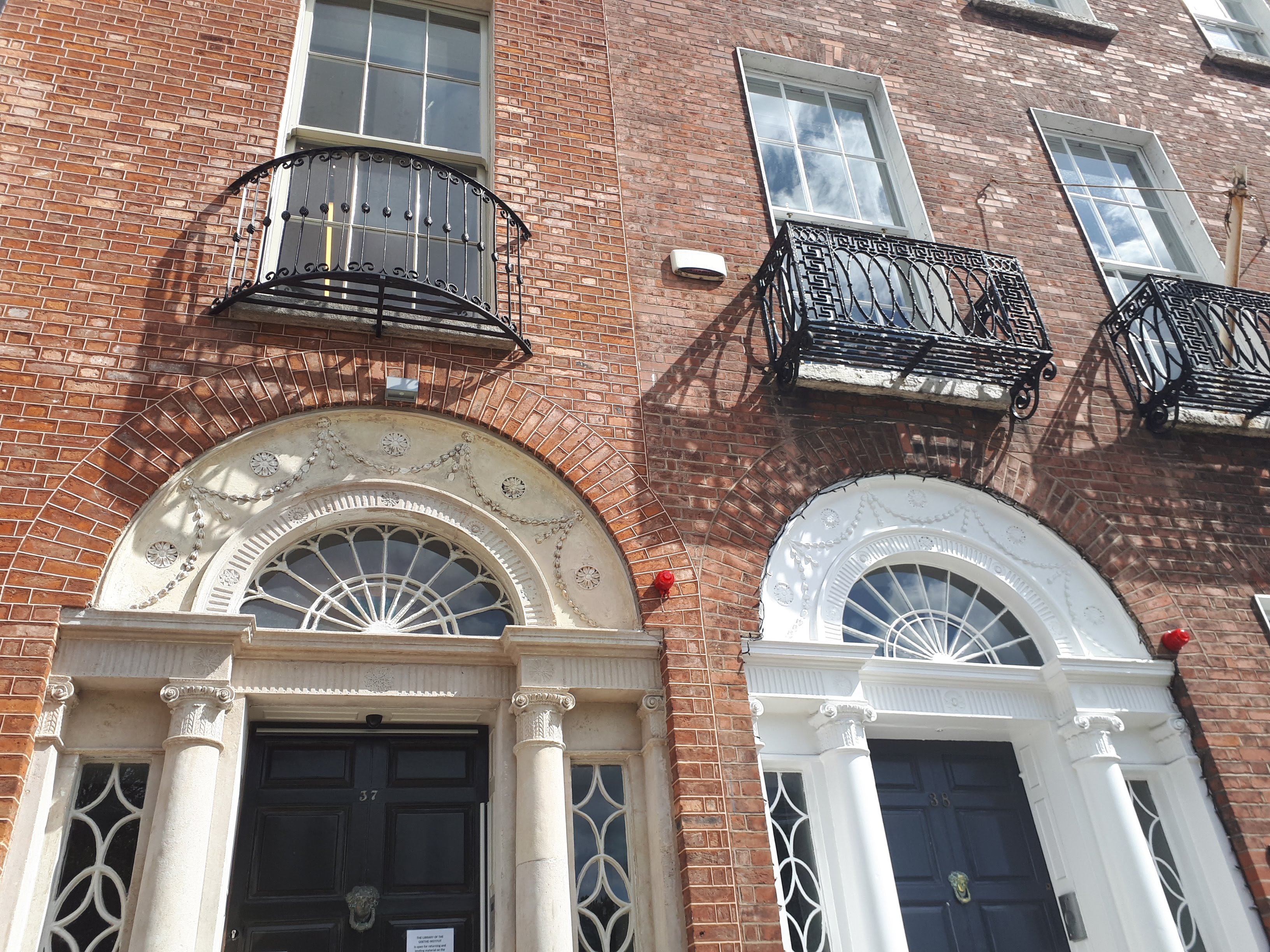 15. Hipped roofs (slope inward & upward from all sides) were a common feature.   This made the roof effectively invisible from street level and gave a rectangular,  imposing look to the building. 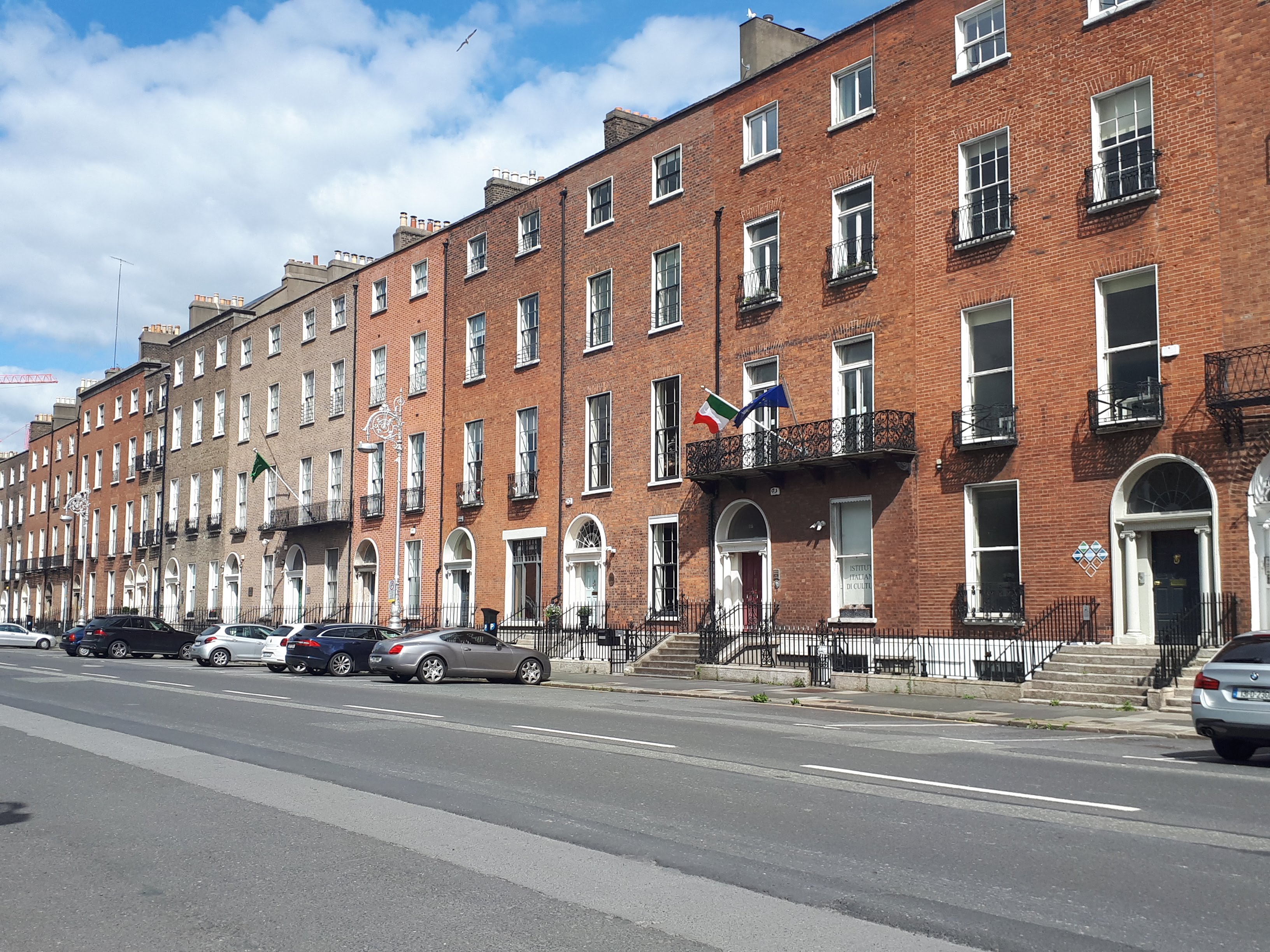 16. Chimneys didn’t really form an important part of the design and stacks were small.  Circular chimney pots were starting to appear during this period.

There were usually two rooms on each floor – one at the back and one at the front – with a passage and staircase at one side.

The first and second storeys were used by the family for dining and entertaining.  Then came the family’s bedrooms.    The servant quarters were located in the smallest rooms under the roof which were accessed via a separate stairs.

The rules for the plain exterior did not transfer inside – reception rooms were sumptuously decorated and furnished. 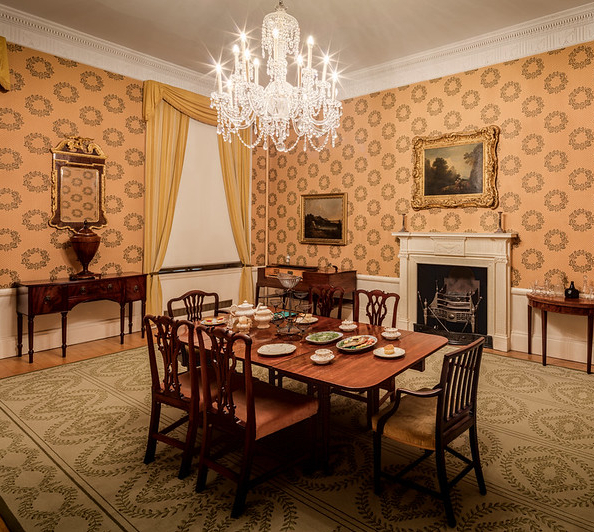 For Ireland’s elite of the time,  these were their townhouses – their main residences were on their landed estates.  There was a pecking order of course – the wealthiest and the most highly socially ranked lived on the beautiful squares while those of lesser means (although still wealthy of course!)  lived on the side roads.

Needless to say,  most of Dublin’s inhabitants did not live in fabulous Georgian houses!   Rapid population growth during the period placed enormous pressure on housing,  healthcare, and policing in the city.   Dublin suffered from poverty,  deprivation,  and crime as much as any other urban area of the time and there was an extreme contrast between rich and poor. … but maybe that’s a story for another time

The Act of Union was passed in 1800 and the Irish Parliament was abolished.   Ireland was amalgamated with England and to be ruled from London until 1922.    With the political decline of the city,  Dublin began to change.  Throughout the 19th century,  the wealthier residents abandoned the city and headed for the new suburbs.   Many Georgian buildings on the north side of the city centre became tenements,  housing multiple families (there could be up to 100 residents in a typical house).   Houses on the south side were turned into businesses or flats.

Thanks to the efforts of the Irish Georgian Society and other conservationists,  many buildings have been saved from destruction while others have been beautifully restored.  Nowadays,  Dublin’s Georgian houses are mostly occupied by business offices,  medical consultants,  cultural and educational bodies and diplomatic missions.   Some have reverted to private homes once again.

Its a credit to those early city planners,  the original high quality of construction and,  of course,  the work of conservationists,  that we have so many examples of beautiful Georgian architecture in Dublin today.

Apart from just wandering the streets,  there are lots of ways to experience Georgian Dublin:

22 thoughts on “Dublin explored – the splendour of its Georgian Streets”