Well …. here’s the thing…. I’m rather accustomed by now to clearing the fridge pretty soon after Christmas Day, and interspersing the glut of movies and mince pies with packing and googling. You see ….. I’m supposed to be on my way somewhere – anywhere – for New Year….

But here am I – still eating ham sandwiches and planning tonight’s TV….

So its not just the TV that’s playing oldies – here’s one from a few years back. Its actually one of my very first blog posts, summarising a short trip to Boston on December 30th, 2017. I’m sorry now I moaned so much about the weather… I’d happily settle for a bit of a cold snap if it meant I could travel!!!

The following post was originally published on 23rd March, 2018 and updated in December, 2020.

I won’t harp on about the weather -but!

The extreme cold led to cancellation of many First Night festivities on New Years Eve.  Sightseeing was very difficult  due to the biting  temperatures. And that was BEFORE  the blizzard!  But you can’t travel almost 5000km and sit in a hotel room…

So we did our best!

Duration – 5 nights (Well – 7 in the end due to flight cancellations!!)

The Lenox Hotel in Back Bay has a great location beside Copley Square.   We opted for a room only plan but did eat in the Irish bar and had breakfast once.   Coffee is provided in the foyer in the morning  and hot chocolate was on tap when guests were confined to the hotel.   It’s beside the metro with direct access to the airport.  We’d be happy to stay again.

We usually try to walk as much as possible but we were very grateful for the 7 day Charlie Cards we bought when we arrived. We used them to travel to and from the airport and availed of the ‘T’ (subway) whenever we could to avoid the cold weather..

The weather dictated what we could see and do so most activities centred on indoor pursuits and food!   We spent more time than normal visiting galleries and exhibitions on a short city break to a new destination.

There were no daily tours available so we just picked up the free pamphlet at the desk and wandered.

(I love this – Boston Public Library  is crammed with paintings, sculpture and of course the John Singer Sargent murals but this really caught my eye – a mosaic [difficult to see here….] depicting the city using hard covered books)

The centrepiece of Copley Square is the beautiful Trinity Church.   There is a cover charge to view the murals and stained glass (Free tour on Sunday morning)

(Preparing the ice sculptures for First Night at Copley Square)

And of course -finishing up in Cheers on Beacon Hill – who are you calling a tourist!!

We set off on a beautiful bright New Years Eve morning to complete the 4km self guided  trail.   It was freezing!  There was no one about.   We were miserable by the time we’d walked as far as the Information Centre at Boston Common where the trail begins!!  The staff advised against remaining outside for too long so we compromised and decided to try and complete the trail as far as Faneuil Hall – (which actually includes 11 out of the 16 landmarks on the trail).

(Boston Massacre Site .. all to ourselves)

(Quincy Market … Let me in there quick!!)

Ringing in the New Year

While most activities were cancelled,  the firework display at Copley Square went ahead at midnight.    A few short steps from our hotel,  we wrapped up and joined the hardiest of Bostonians and tourists who braved the cold in order to ring in the new year.

No visit to the United States is complete for me without a fix at an outlet centre! Dilemma! Research suggested Wrentham Village but access by public transport seemed cumbersome while the more costly bus tour trips from the city seemed to allow for a maximum of 5 hours shopping  (Seriously!   Come on!!)   As we were reluctant to rent a car because of the weather condition,  things were NOT looking too good!.

Assembly Row is a relatively new centre with maybe about 30 stores or thereabouts.  It’s on the ‘T’ just 3 stops from downtown Boston.   While not on the scale of the more established outlets,  we had enough to keep us busy for several hours and came back laden and content!

Attired in our new gear,  we decided to dine in Hanover Street, the main drag of the Italian neighbourhood.   At 8.30pm the place was almost deserted and we settled on Panza because it was one of the few restaurants on the street that looked relatively busy and had a bit of a buzz.   We were happy with our choice… the food was great.

We decided to check out Trident Booksellers and Cafe and see if it lived up to its reputation.  We got a table straight away . There’s a good menu and I was happy with my breakfast sandwich

The building itself in the Seaport district is as much of an attraction as the exhibits. 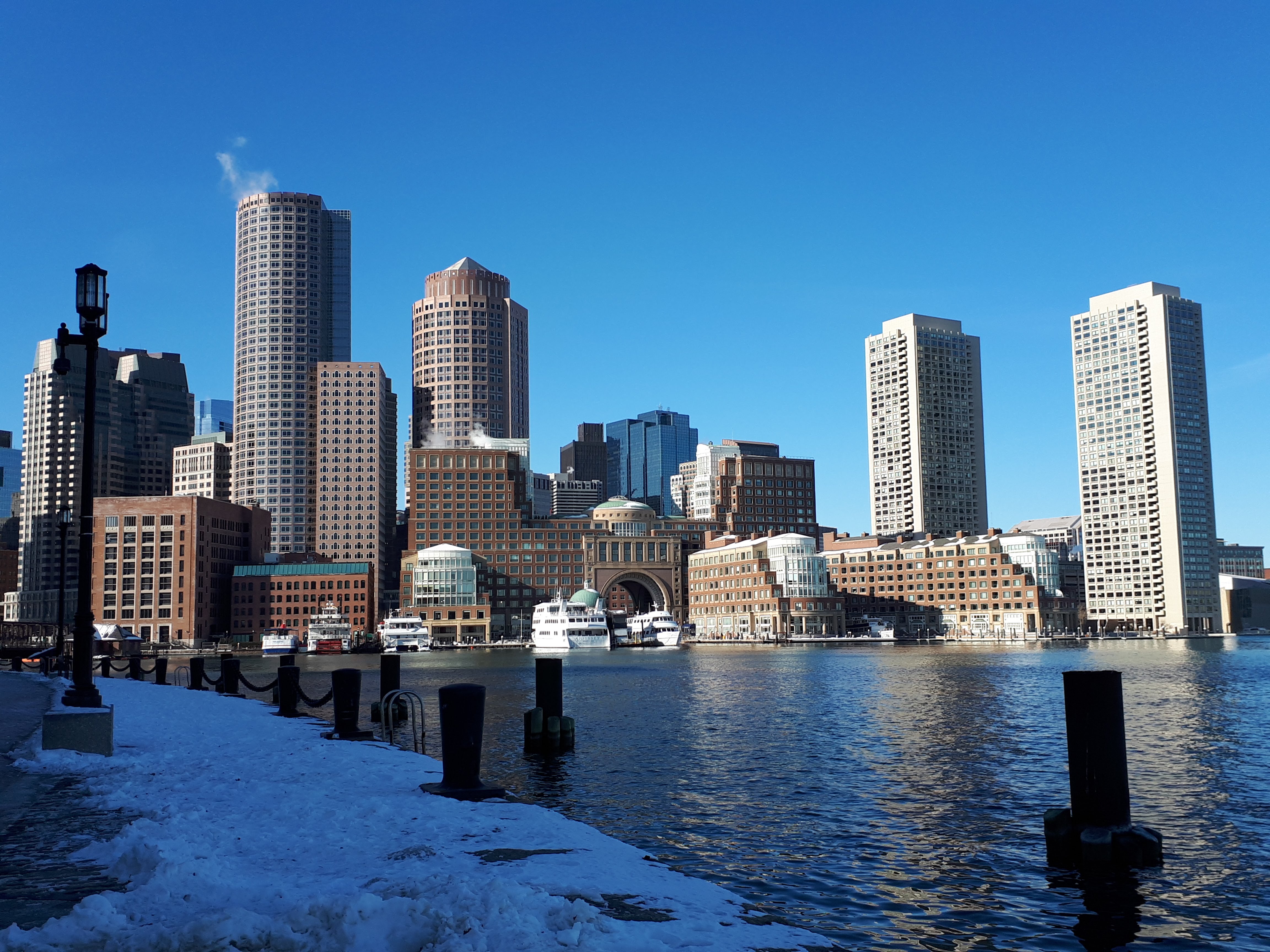 (The place to ourselves!)

We found ourselves close to Fanueil Hall so decided to brave the elements a little longer and complete the final 5 landmarks of the Freedom Trail.  The route brought us back to the North End where we lunched in Modern Pastry before visiting Paul Revere’s House,  the Old North Church and Copp’s Hill Burying Ground.

(Freedom Trail… North End and beyond)

(You better get that drip sorted!!  Extra landmark in Charlestown Navy Yard … Home of the USS Constitution)

(Are we there yet!! Picturesque streets approaching Bunker Hill)

A few blocks from the downtown shopping area,  Chinatown is perfect for casual dining after browsing the stores and it’s not too far when weighed down with all your purchases!   As well as Chinese,  you will find Thai, Vietnamese and other Asian cuisines. 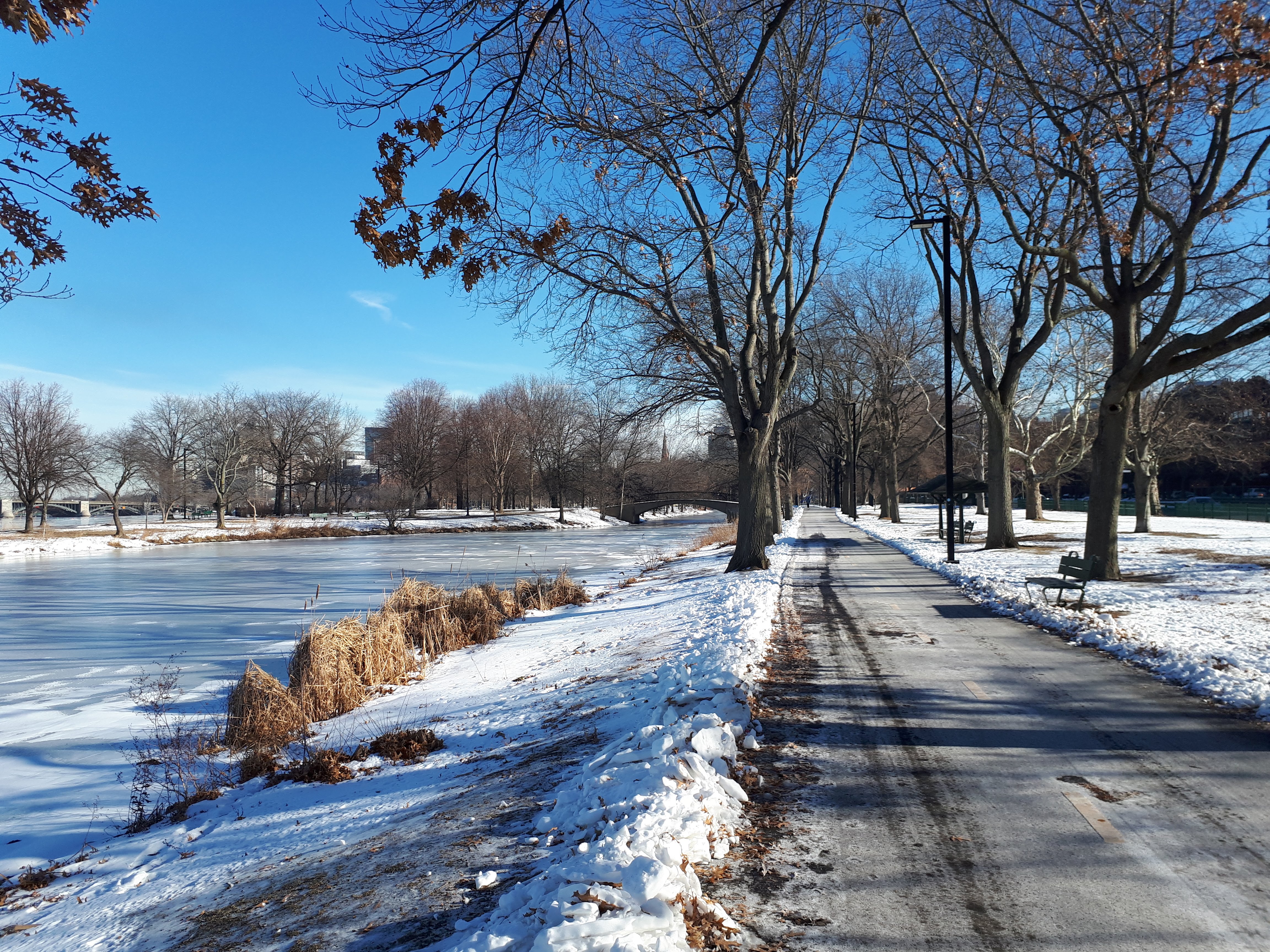 (Another beautiful morning – but where IS everyone!)

Continuing on from the Esplanade,  the narrow streets of Beacon Hill are lined with beautiful houses,  cobblestone and gas lighting.

A stroll through Beacon Hill brought us to the Charles / MGH  ‘T’ station and a few short stops to Harvard.   It’s well worth allowing an hour or two for wandering through the campus and having lunch before moving on.   We weren’t able to avail of any free campus tours but picked up a street map which highlighted the main buildings and landmarks.

We couldn’t head home from Boston without visiting the museum but you don’t have to be Irish or a Kennedy  fan to appreciate this insight into the history of the era.  Information is well presented through video, exhibitions and memorabilia, in particular,  the Cuban Missile Crisis.

A free shuttle connects from the closest ‘T’ station. The entrance fee is $14.  We’re not big on museums in general but this one is deservedly one of the main tourist attractions in the city.

Stranded due to flight cancellations,  we found ourselves with an extra day on our hands.  Restricted to indoors pursuits we headed for the biggest gallery in town!

Its huge!  With over 50 galleries its not a venue for a single visit.  The Map and Visitors Guide is colour-coded to help identify the different collections.  If you have time,  its worth heading straight for the visitors centre and checking the free tours of the day as well as any temporary exhibitions.  We joined the contemporary art collection tour (about 40 minutes) which was a nice intro to the gallery and gave us a chance to get our bearings.   The Guide lists 12 highlights and their location for those on a very tight schedule.   Needless to say,  we tried to whirl past everything and didn’t do justice to the collection but we were delighted that our extra time in the city allowed us to fit in a visit.

( A gallery masterpiece!… View from cafe)

We had dinner in Parish Cafe, a very popular spot within walking distance of our hotel.  They have a good menu and I loved the fact that we could have half portions for our mains after our shared starter.

As an alternative to the subway,  the Back Bay airport shuttle costs just $3 if you have a Charlie Card.

Boston is a compact city so it is worth paying a bit extra for a centrally located hotel which puts you within walking distance of many landmarks and activities.

We had lots of opportunity for shopping during our visit:

When I go back I want to…

-Spend time people-watching on Boston Common (in the heat of course!!!!)

I’ll leave you with a few other New Year posts from the past and wish you all the best for 2021.

15 thoughts on “NEW YEAR IN BOSTON”