I began my A-Z Vignettes in February 2019 and finally reached ‘Z’ last week. I ran through them last night in my head and could only remember 14 of them! I tested himself this morning – as my number one fan(!) I was expecting great things. He got one…. Z….my hero! So – good excuse to subject you all to a recap over the next week or two….

A is for Abu Simbel

In 1981 I visited Egypt for the first time.   Aswan was pretty much as far as anyone went by road.   At almost 300km further south,   Abu Simbel could be reached by river or by a flight which at the time was £90 if I remember correctly and way out of a backpacker’s league.

Roll on a mere 9 years to 1990 and I found myself back in Aswan.   They had constructed a road!!   It was now possible to get there and back in a (long!) day.   I remember the strip of grey stretching ahead of us through the desert.  There was one very new,  and pretty basic ‘stopover’ with toilets and snacks.   I don’t recall even meeting a car on the road.

At one stage a ripple of excitement spread though the bus … everyone made for the windows on one side (all tourists of course).   It was the first time any of us had seen a mirage…. I can still see it glimmering across the sand.

We’d a few hours at the temple before heading back on the evening bus.   Great stuff! 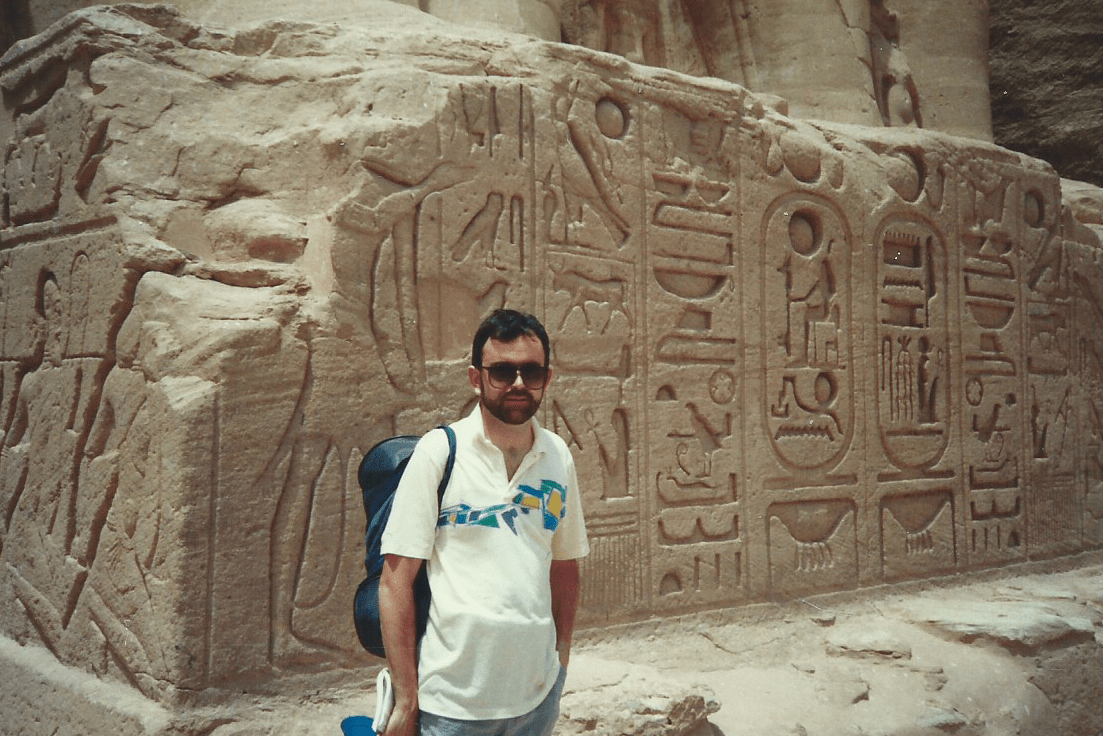 B is for Bora Bora

I just always loved the name – it was the most exotic place I could imagine (although I’d no idea where it actually was!).   In 2004 we were planning a trip to Australia and looking at flight options.   We could return as we went out – through Asia,  or go home via the US with a stopover in Tahiti.   And there it was – this tiny 12 square mile dot less than an hour’s flight from Papeete.   We rejigged the budget,  found the least expensive over water bungalows on the island and booked 4 nights in paradise.

There’s no way you’d ever doze off on this plane!   You wouldn’t want to miss one second as the flight path takes you over reefs and lagoons.   And then the approach to Bora Bora itself!   The dormant volcano of Mount Otemano dominates the tiny island so the airport is actually located on one of the separate islets that ring the lagoon.   As we landed,  we could see the ground staff playing boules as they awaited the plane.   No need for heavy mechinisation here… the luggage trolley was trundled over and quickly loaded as we received our welcome shell leis.   And the taxi rank?  –  a row of boats of course,  waiting to transfer everyone either directly to their resort or across the lagoon to Vaitape -the largest settlement on the island. 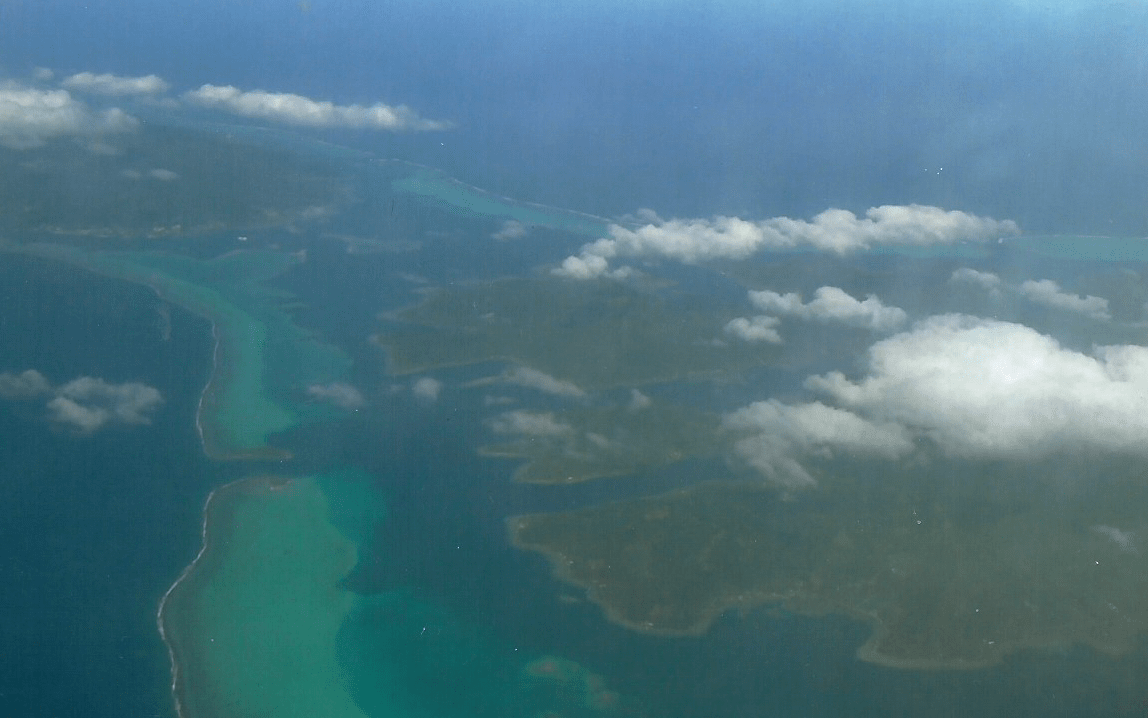 (View from the plane) 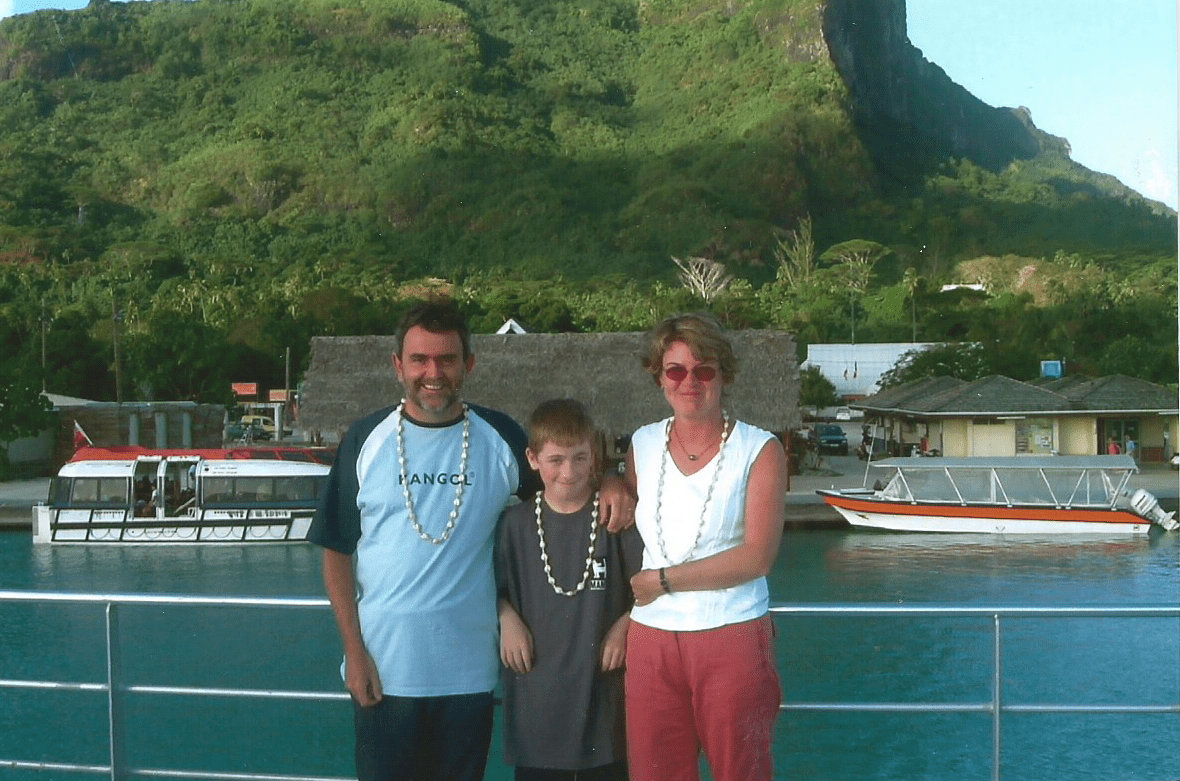 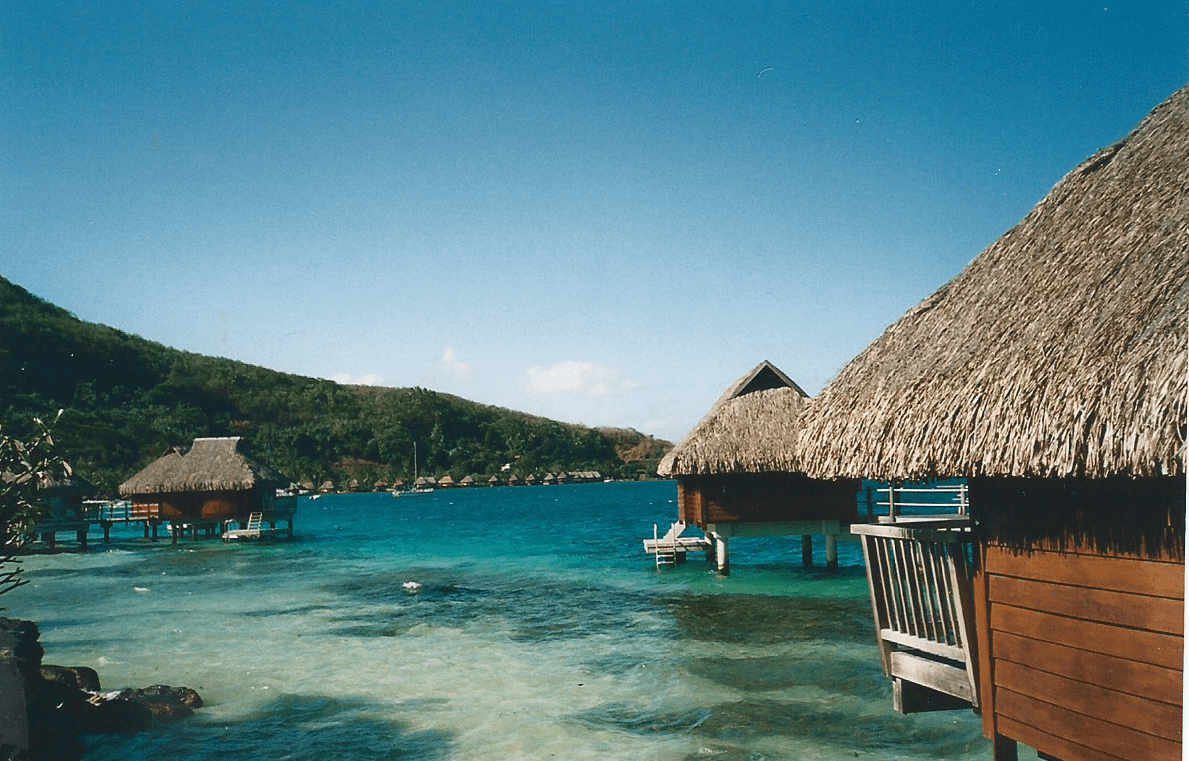 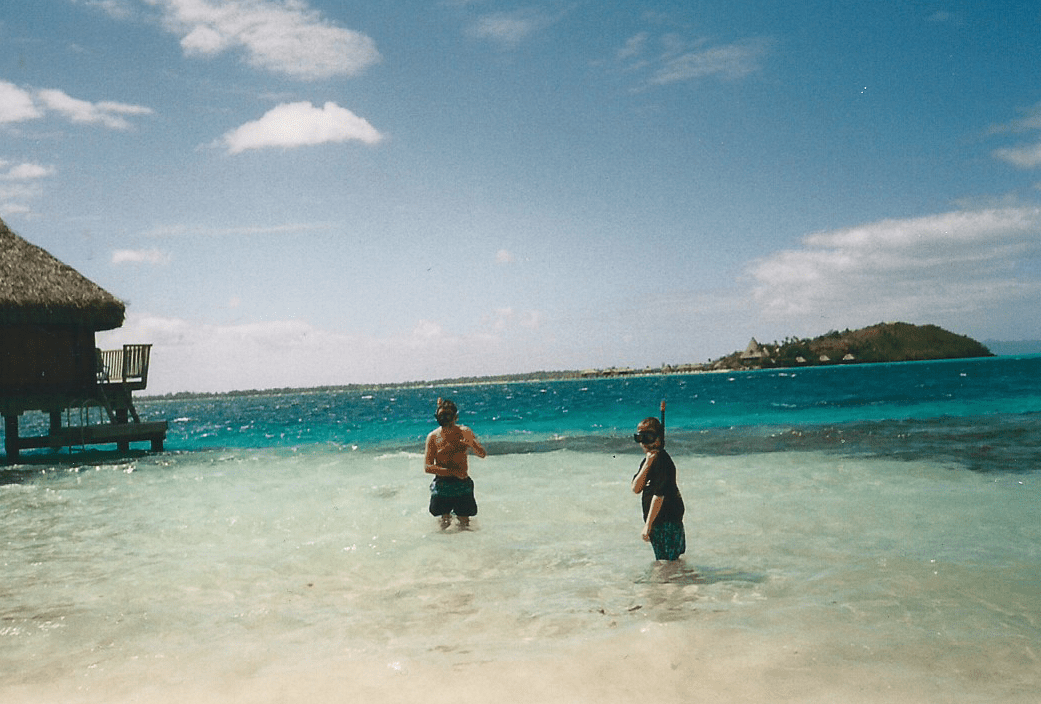 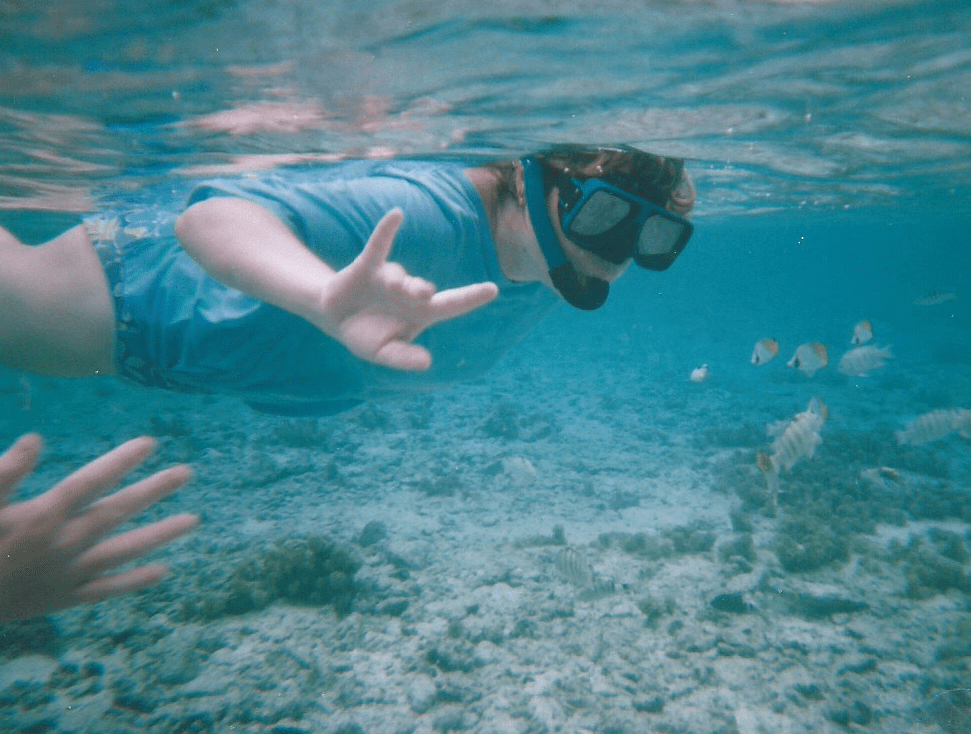 (Wave for the camera!)

C is for Carthage

You’ve probably realised by now that I’m a sucker for exotic names and stones – put them together, add a bit of sun and I really am in paradise!

I wasn’t aware of Carthage’s actual existence until we visited Tunisia in 2001.   I knew from Virgil (sorry – really showing off today!!) that Dido, the founder and first queen of Carthage fell in love with Aeneas when he landed in North Africa and she committed suicide when he left a year later.  In reality,  it was built in the 9th century BC as a trading post by the Phoenicians.

You can see why they decided to set up here.     Located on an easily defensible peninsula at the narrowest stretch of the Mediterranean Sea between Sicily and North Africa,   it was the perfect place for dominating both sea and overland trading routes.

While Dido may be the stuff of myth,  there’s another famous Carthaginian who was very real indeed.   Hannibal – (yes he of the elephants!) came from Carthage.   One of the greatest military leaders in history,  he caught the Romans off guard when he reached Italy via the Alps with his army and 37 elephants.   He was never able to take Rome though and eventually the Romans had their revenge,  destroying Carthage in 146 BC.   They even threw salt over the ruins,  making the soil infertile.   The city was later rebuilt under Julius Caesar and became a major part of the Roman Empire until about 700 AD.

Today,  exotic Carthage is alas a residential suburb of Tunis.  But with its beautiful setting,  backed by the sea,  its well worth a visit just to stand and look out over the Med and imagine its glorious past!

Firstly,  setting the scene:  USA ⇒ Wyoming ⇒ Jackson Hole ⇒ Million Dollar Cowboy Bar ⇒ Saturday Night.   We’re in town for a few days hiking in Grand Teton National Park en route to Yellowstone.   We’ve had something to eat and pick a bar for a drink on our way back to the motel.   We hum and haw over the $5 cover charge – we’re not staying that long – but pay up anyway and head inside.

There are saddle stools along the bar.  We perch on two and order our drinks but the band is starting up and there’s a free table overlooking the dance floor so we grab it.

And what a ‘show’!!!  Jiving?  Country Swing?  I don’t know what you’d call it but the energy on that dance floor – I‘ve never seen anything like it!   Most of the dancers were local – they all knew each other and swapped partners frequently.  It was mesmerizing – almost steamy at times but nothing you’d need to turn a hose on!  Whenever I think of it I’m reminded of the staff party at the beginning of ‘Dirty Dancing’.

And then there was that guy! – black boots,  black jeans,  black cowboy shirt,  black stetson.   So now I’m thinking ‘Saturday Night Fever’ and Tony Manero!   He owned the floor.   And he worked the room – just held out his hand and the women came!  But no female got to dance too much with him.   This guy wasn’t looking for romance – he was just here to dance.

And yes – we did finally venture onto the dance floor,  tucked ourselves into a corner and did our thing!  But alas,  the man in black didn’t come looking for me with his outstretched hand!

E is for Early Mornings

I’m not an early riser – in fact I’d rather not do mornings at all  – they’d be banned if I’d my way!   However,  I have been know to drag myself from the bed before sunrise when the occasion begs it and wow – what a world there is out there!!

Waiting for a sunrise guided walk around the base of the rock.

On an early morning game drive,  we rounded a corner and found 5 cubs patiently waiting for mum to return with breakfast.   We watched them for 15 – 20 minutes and while they frolicked about at times,  they never strayed from the spot.

Turtle returning to the sea after laying eggs in the sand.

As the sun rises,  around 200 Buddhist monks leave their temples for a tradition of alms giving that dates back to the 14th century.   Locals wake early to prepare the food and kneel in wait along the route to present their gift.

When we reach the gates,  we join the queue – the park doesn’t open until sunrise and then its another 60 km to the main dunes.

Once the gate opens,  the crowd disperses ….

People don’t arrive there early just for the light and colours,  but also to start on the climb before it gets too hot.

We were lucky enough to have a cabin with a perfect morning view.

The only thing that gets me up early at home is a trip to the airport.  However,  I did find ONE event:

Standing on Killiney Hill,  overlooking the Irish Sea and greeting a new millennium!

19 thoughts on “Vignettes Revisited: A -E”