The powers that be are doing their very best to be upbeat today, on our biggest national festival. Instead of the usual craic on every main street in the country, they’ve put huge work and effort into a new six-day TV channel, St Patrick’s Festival TV (SPFTV). With a theme Dúisigh Éire! (Awaken Ireland!), Irish people are being called to “throw off the long, dark months and rise to embrace brighter days ahead”……. sure we’ll do our best!!!

Once again I’m falling back on better times and republishing a piece from 2019….

Its March 17th and its a great day to be Irish!   Today we celebrate the arrival of Christianity into Ireland.   And what a celebration it is!  This festival is celebrated in more countries around the world than any other national day.  No matter where you are,  you’re bound to be near enough to an Irish pub so before you head off to ‘Drown the Shamrock’,  have a quick read below and arm yourself with an encyclopedic knowledge to impress your fellow revelers!

♣ Firstly, let’s get the spoilers out of the way ♣

♣ PATRICK– was not his real name!  He was actually named Maewyn Succat and changed his name to Patricius after becoming a priest.  So we could be celebrating Maewyn’s Day!

♣ He wasn’t even IRISH!   He is thought to have come from either Scotland or Wales.

♣ He banished all the SNAKES from Ireland – except that …… according to fossil records,  there never were any to begin with.   The snakes probably represent the pagans he converted to Christianity.

♣ His colour was BLUE!   Sometime in the 19th century there was a shift towards green – Ireland’s nickname ‘The Emerald Isle’ and the green in our flag possibly had something to do with it.

♣ He was never even CANONIZED by the pope so his saintly status is suspect!

♣ LEPRACHAUNS have nothing to do with St. Patrick or his feast day!

♣ Irish people do not eat CORNED BEEF AND CABBAGE on March 17th!  Nor are we partial to GREEN PINTS!

♣ Moving on the the Real Stuff ♣

He was born around 375AD and came from a relatively wealthy family.  Aged 16,  he was kidnapped,  brought to Northern Ireland and sold as a slave to herd sheep.  After his escape he returned home but later joined the priesthood and came back to Ireland to convert the Irish to Christianity.

Today,  there are sites all over the country associated with Patrick,  showing how far and wide he traveled while spreading his teachings.

(At the Rock of Cashel,  Patrick converted King Aengus to Christianity)

It is believed to be the date of his death in 460AD.

♣ What’s the Shamrock about?

Patrick used the 3 leaf shamrock as a metaphor for the Holy Trinity.

♣ The first St. Patrick’s Day parade was held not in Ireland but in Boston in 1737.

♣ The largest annual parade is held in New York,  lasting up to 6 hours!  Apart from obvious centres of Irish community – UK,  USA,  Australia – there are parades as far flung as Moscow,  Buenos Aries and Seoul.   There’s been a parade in Tokyo since 1992.

♣ Perhaps prompted by Chicago’s green river,  Tourism Ireland came up with the simple but brilliant  phenomenon of Global Greening.  Over the past decade,  about 400 famous locations around the world have turned green to celebrate St. Patrick’s Day.  The ever growing list includes: 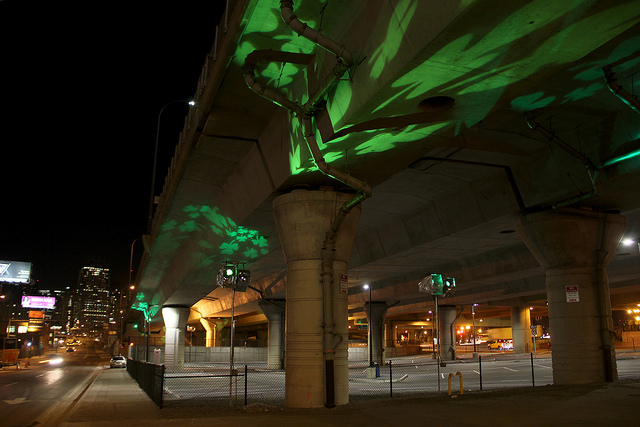 ♣ Irish government ministers use the opportunity to travel abroad and promote Irish enterprise and culture to key trading partners.  The most well known of these events is the exchange of shamrock between our Taoiseach (Prime Minister) and the US President in the White House (apparently, immediately after the photo opportunity,  protocol demands that the shamrock be destroyed by the secret service!).

♣ It’s estimated that 5.5 million pints of Guinness are sold daily worldwide.  The figure rises to circa 13 million on March 17th!

Of course,  there’s nothing like celebrating our national day in Ireland.   Growing up here,  it was a strict religious festival until the 1970’s.   We made or bought a badge and wore a sprig of shamrock and hopefully went to a parade after mass.  It was a dry holiday – yes – hard to believe that pubs were ever closed on St. Patrick’s Day!!

The religious element is now much diluted and has given way to a mainly secular celebration which has provided a great boost for tourism and the economy.  And while we Irish may roll our eyes at the green pints and dressed up leprachauns,  it’s still a wonderful opportunity for us to reflect upon our identity and to celebrate all good things Irish.

In Dublin,  the 5 day festival includes  music,  céilí dancing,  free guided history walks,  singing workshops,  food fairs,  drama,  comedy and lots of craic!   The parade remains the focus of the celebration and an estimated 500,000 people fill the city centre on the 17th.   While Dublin may attract the biggest crowd,  there are festivities all over the country,  starting with a parade at 6.00am in Dingle!

♣ How to Drown the Shamrock ♣

As the day draws to an end-

Take a leaf from the sprig of shamrock you have been wearing all day.

Put it into the bottom of the final glass.

When you’ve toasted everyone,  take the shamrock from the glass and throw it over your left shoulder.

St. Patrick was a gentleman

Who through strategy and stealth

Drove all the snakes from Ireland,

Here’s a toasting to his health.

But not too many toastings

Lest you lose yourself and then

And see all those snakes again!

And finally,  one for all you fellow travelers today,  wherever you my be:

May the luck of the Irish

And the highway you travel

Be lined with green lights

Wherever you go and whatever you do,

May the luck of the Irish be there with you.